The metabolic syndrome (syndrome X, insulin resistance syndrome) consists of a constellation of metabolic abnormalities that confer increased risk of cardiovascular disease (CVD) and diabetes mellitus (DM). The criteria for the metabolic syndrome have evolved since the original definition by the World Health Organization in 1998, reflecting growing clinical evidence and analysis by a variety of consensus conferences and professional organizations. The major features of the metabolic syndrome include central obesity, hypertriglyceridemia, low high-density lipoprotein (HDL) cholesterol, hyper-glycemia, and hypertension (Table 32-1).

TABLE 32-1
NCEP:ATPIII 2001 AND IDF CRITERIA FOR THE METABOLIC SYNDROME 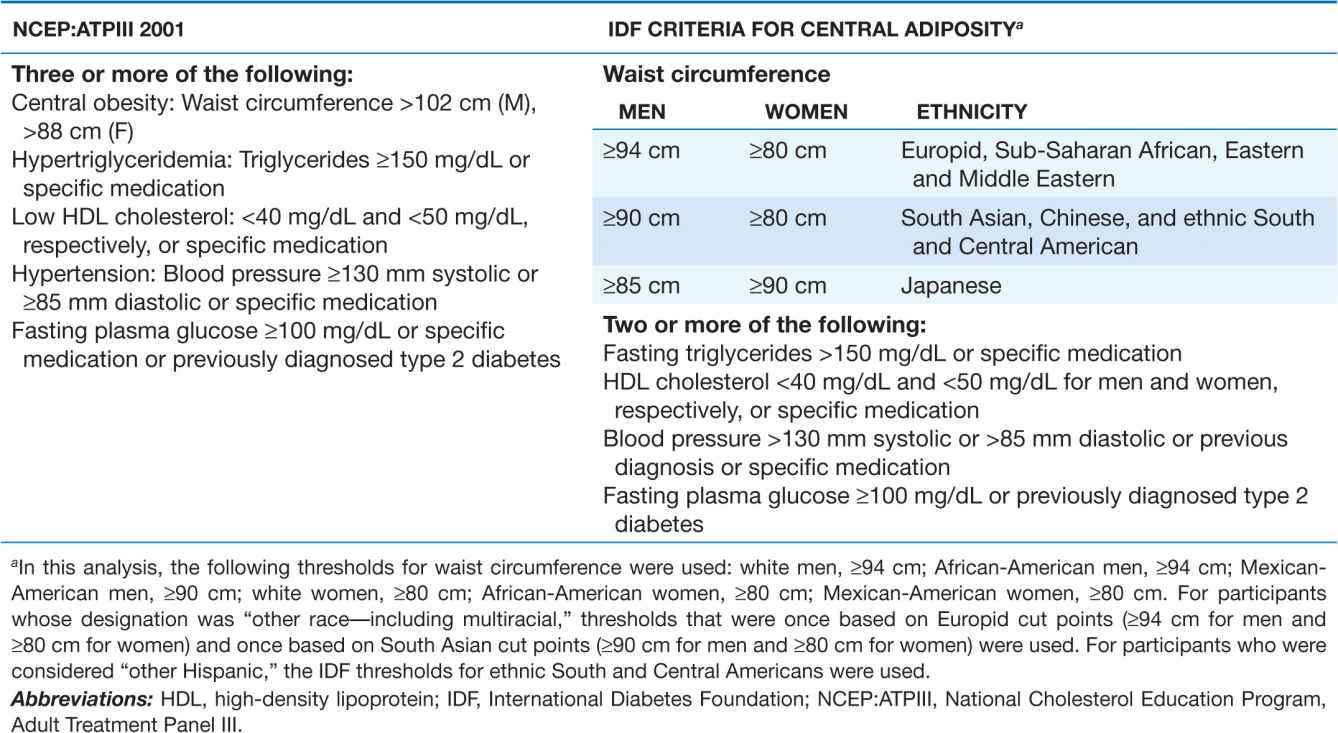 The frequency distribution of the five components of the syndrome for the U.S. population (NHANES III) is summarized in Fig. 32-1. Increases in waist circumference predominate in women, whereas fasting triglycerides >150 mg/dL and hypertension are more likely in men.

Although the first description of the metabolic syndrome occurred in the early twentieth century, the worldwide overweight/obesity epidemic has been the driving force for more recent recognition of the syndrome. Central adiposity is a key feature of the syndrome, reflecting the fact that the syndrome’s prevalence is driven by the strong relationship between waist circumference and increasing adiposity. However, despite the importance of obesity, patients who are normal weight may also be insulin-resistant and have the syndrome.

Physical inactivity is a predictor of CVD events and related mortality rate. Many components of the metabolic syndrome are associated with a sedentary lifestyle, including increased adipose tissue (predominantly central), reduced HDL cholesterol, and a trend toward increased triglycerides, high blood pressure, and increased glucose in the genetically susceptible. Compared with individuals who watched television or videos or used the computer <1 h daily, those who carried out those behaviors for >4 h daily had a twofold increased risk of the metabolic syndrome.

The metabolic syndrome affects 44% of the U.S. population older than age 50. A greater percentage of women over age 50 have the syndrome than men. The age dependency of the syndrome’s prevalence is seen in most populations around the world.

An early major contributor to the development of insulin resistance is an overabundance of circulating fatty acids (Fig. 32-2). Plasma albumin-bound free fatty acids (FFAs) are derived predominantly from adipose tissue triglyceride stores released by lipolytic enzymes lipase. Fatty acids are also derived from the lipolysis of triglyceride-rich lipoproteins in tissues by lipoprotein lipase (LPL). Insulin mediates both antilipolysis and the stimulation of LPL in adipose tissue. Of note, the inhibition of lipolysis in adipose tissue is the most sensitive pathway of insulin action. Thus, when insulin resistance develops, increased lipolysis produces more fatty acids, which further decrease the antilipolytic effect of insulin. Excessive fatty acids enhance substrate availability and create insulin resistance by modifying downstream signaling. Fatty acids impair insulin-mediated glucose uptake and accumulate as triglycerides in both skeletal and cardiac muscle, whereas increased glucose production and triglyceride accumulation are seen in the liver. 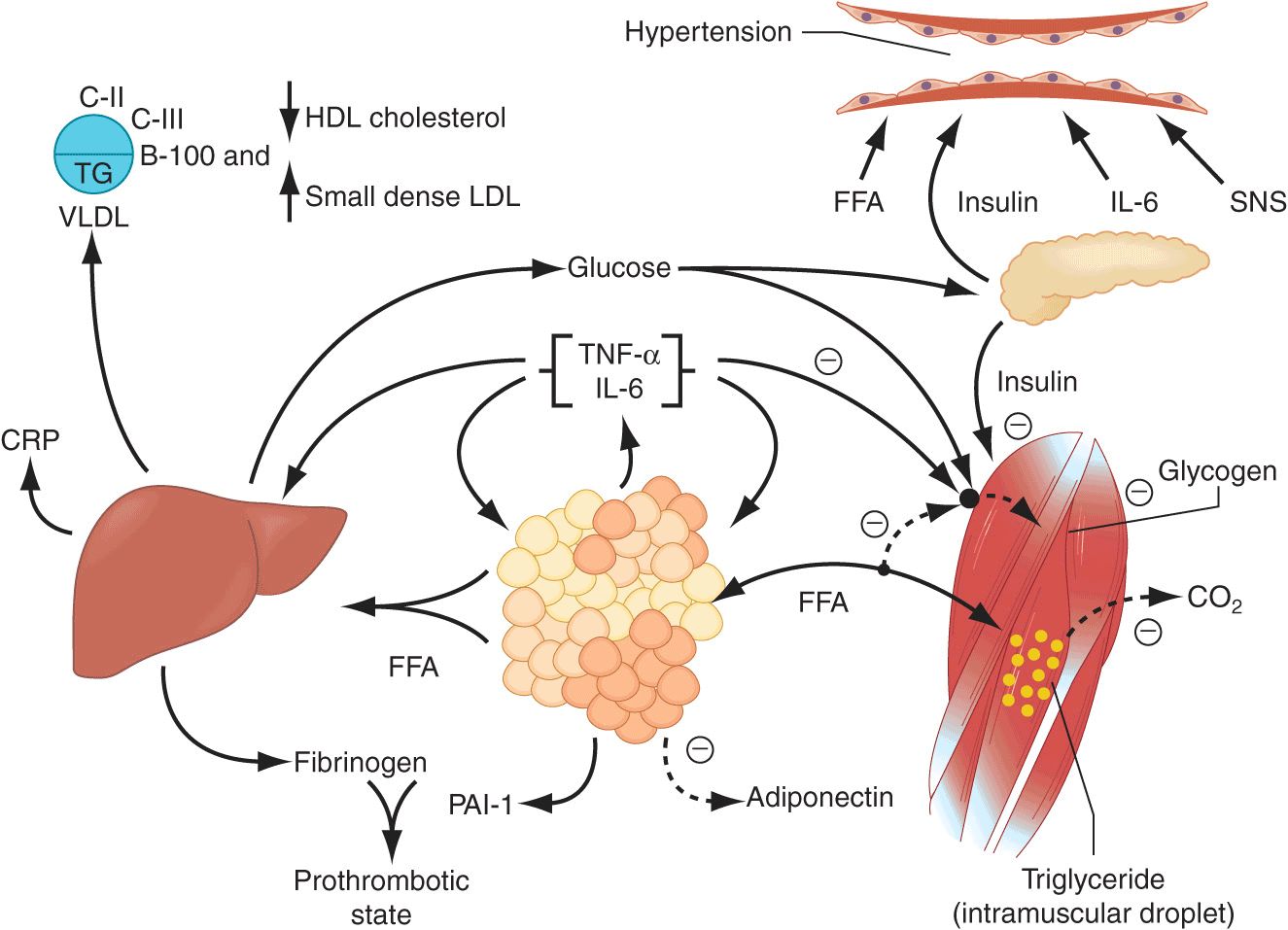 FIGURE 32-2
Pathophysiology of the metabolic syndrome. Free fatty acids (FFAs) are released in abundance from an expanded adipose tissue mass. In the liver, FFAs result in an increased production of glucose and triglycerides and secretion of very low-density lipoproteins (VLDLs). Associated lipid/lipoprotein abnormalities include reductions in high-density lipoprotein (HDL) cholesterol and an increased density of low-density lipoproteins (LDLs). FFAs also reduce insulin sensitivity in muscle by inhibiting insulin-mediated glucose uptake. Associated defects include a reduction in glucose partitioning to glycogen and increased lipid accumulation in triglyceride (TG). Increases in circulating glucose, and to some extent FFA, increase pancreatic insulin secretion, resulting in hyper-insulinemia. Hyperinsulinemia may result in enhanced sodium reabsorption and increased sympathetic nervous system (SNS) activity and contribute to the hypertension, as might increased levels of circulating FFAs. The proinflammatory state is superimposed and contributory to the insulin resistance produced by excessive FFAs. The enhanced secretion of interleukin 6 (IL-6) and tumor necrosis factor α(TNF-α) produced by adipocytes and monocyte-derived macrophages results in more insulin resistance and lipolysis of adipose tissue triglyceride stores to circulating FFAs. IL-6 and other cytokines also enhance hepatic glucose production, VLDL production by the liver, and insulin resistance in muscle. Cytokines and FFAs also increase the hepatic production of fibrinogen and adipocyte production of plasminogen activator inhibitor 1 (PAI-1), resulting in a prothrombotic state. Higher levels of circulating cytokines also stimulate the hepatic production of C-reactive protein (CRP). Reduced production of the anti-inflammatory and insulin-sensitizing cytokine adiponectin is also associated with the metabolic syndrome. (Reprinted from RH Eckel et al: Lancet 365:1415, 2005, with permission from Elsevier.)

The oxidative stress hypothesis provides a unifying theory for aging and the predisposition to the metabolic syndrome. In studies carried out in insulin-resistant subjects with obesity or type 2 diabetes, the offspring of patients with type 2 diabetes, and the elderly, a defect has been identified in mitochondrial oxidative phosphorylation, leading to the accumulation of triglycerides and related lipid molecules in muscle. The accumulation of lipids in muscle is associated with insulin resistance.

(See also Chap. 31) In general, FFA flux to the liver is associated with increased production of apoB-containing, triglyceride-rich very low-density lipoproteins (VLDLs). The effect of insulin on this process is complex, but hypertriglyceridemia is an excellent marker of the insulin-resistant condition.

The other major lipoprotein disturbance in the metabolic syndrome is a reduction in HDL cholesterol. This reduction is a consequence of changes in HDL composition and metabolism. In the presence of hypertriglyceridemia, a decrease in the cholesterol content of HDL is a consequence of reduced cholesteryl ester content of the lipoprotein core in combination with cholesteryl ester transfer protein–mediated alterations in triglyceride, making the particle small and dense. This change in lipoprotein composition also results in increased clearance of HDL from the circulation. The relationships of these changes in HDL to insulin resistance are probably indirect, occurring in concert with the changes in triglyceride-rich lipoprotein metabolism.

In addition to HDL, low-density lipoproteins (LDLs) are modified in composition. With fasting serum triglycerides >2.0 mM (~180 mg/dL), there is almost always a predominance of small dense LDLs. Small dense LDLs are thought to be more atherogenic. They may be toxic to the endothelium, and they are able to transit through the endothelial basement membrane and adhere to glycosaminoglycans. They also have increased susceptibility to oxidation and are selectively bound to scavenger receptors on monocyte-derived macrophages. Subjects with increased small dense LDL particles and hypertriglyceridemia also have increased cholesterol content of both VLDL1 and VLDL2 subfractions. This relatively cholesterol-rich VLDL particle may contribute to the atherogenic risk in patients with metabolic syndrome.

The defects in insulin action lead to impaired suppression of glucose production by the liver and kidney and reduced glucose uptake and metabolism in insulin-sensitive tissues, i.e., muscle and adipose tissue. The relationship between impaired fasting glucose (IFG) or impaired glucose tolerance (IGT) and insulin resistance is well supported by human, nonhuman primate, and rodent studies. To compensate for defects in insulin action, insulin secretion and/or clearance must be modified to sustain euglycemia. Ultimately, this compensatory mechanism fails, usually because of defects in insulin secretion, resulting in progress from IFG and/or IGT to DM.

The relationship between insulin resistance and hypertension is well established. Paradoxically, under normal physiologic conditions, insulin is a vasodilator with secondary effects on sodium reabsorption in the kidney. However, in the setting of insulin resistance, the vasodilatory effect of insulin is lost but the renal effect on sodium reabsorption is preserved. Sodium reabsorption is increased in whites with the metabolic syndrome but not in Africans or Asians. Insulin also increases the activity of the sympathetic nervous system, an effect that also may be preserved in the setting of the insulin resistance. Finally, insulin resistance is characterized by pathway-specific impairment in phosphatidylinositol-3-kinase signaling. In the endothelium, this may cause an imbalance between the production of nitric oxide and the secretion of endothelin 1, leading to decreased blood flow. Although these mechanisms are provocative, when insulin action is assessed by levels of fasting insulin or by the Homeostasis Model Assessment (HOMA), insulin resistance contributes only modestly to the increased prevalence of hypertension in the metabolic syndrome.

The increases in proinflammatory cytokines, including interleukin (IL)-1, IL-6, IL-18, resistin, tumor necrosis factor (TNF) α, and C-reactive protein (CRP), reflect overproduction by the expanded adipose tissue mass (Fig. 32-2). Adipose tissue-derived macrophages may be the primary source of proinflammatory cytokines locally and in the systemic circulation. It remains unclear, however, how much of the insulin resistance is caused by the paracrine vs. endocrine effects of these cytokines.

Overall, the risk for type 2 diabetes in patients with the metabolic syndrome is increased three- to fivefold. In the FOS’s 8-year follow-up of middle-aged men and women, the population-attributable risk for developing type 2 diabetes was 62% in men and 47% in women.

Fatty liver is relatively common. However, in NASH, both triglyceride accumulation and inflammation coexist. NASH is now present in 2–3% of the population in the United States and other Western countries. As the prevalence of overweight/obesity and the metabolic syndrome increases, NASH may become one of the more common causes of end-stage liver disease and hepatocellular carcinoma.

Hyperuricemia reflects defects in insulin action on the renal tubular reabsorption of uric acid, whereas the increase in asymmetric dimethylarginine, an endogenous inhibitor of nitric oxide synthase, relates to endothelial dysfunction. Microalbuminuria also may be caused by altered endothelial pathophysiology in the insulin-resistant state.

The diagnosis of the metabolic syndrome relies on satisfying the criteria listed in Table 32-1 by using tools at the bedside and in the laboratory. The medical history should include evaluation of symptoms for OSA in all patients and PCOS in premenopausal women. Family history will help determine risk for CVD and DM. Blood pressure and waist circumference measurements provide information necessary for the diagnosis.

Fasting lipids and glucose are needed to determine if the metabolic syndrome is present. The measurement of additional biomarkers associated with insulin resistance can be individualized. Such tests might include apoB, high-sensitivity CRP, fibrinogen, uric acid, urinary microalbumin, and liver function tests. A sleep study should be performed if symptoms of OSA are present. If PCOS is suspected on the basis of clinical features and anovulation, testosterone, luteinizing hormone, and follicle-stimulating hormone should be measured.