Sudden cardiac death (SCD) is defined as natural death due to cardiac causes in a person who may or may not have previously recognized heart disease but in whom the time and mode of death are unexpected. In the context of time, “sudden” is defined for most clinical and epidemiologic purposes as 1 h or less between a change in clinical status heralding the onset of the terminal clinical event and the cardiac arrest itself. An exception is unwitnessed deaths, in which pathologists may expand the definition of time to 24 h after the victim was last seen to be alive and stable.

The overwhelming majority of natural deaths are caused by cardiac disorders. However, it is common for underlying heart diseases—often far advanced—to go unrecognized before the fatal event. As a result, up to two-thirds of all SCDs occur as the first clinical expression of previously undiagnosed disease or in patients with known heart disease, the extent of which suggests low risk. The magnitude of sudden cardiac death as a public health problem is highlighted by the estimate that ~50% of all cardiac deaths are sudden and unexpected, accounting for a total SCD burden estimated to range from <200,000 to >450,000 deaths each year in the United States. SCD is a direct consequence of cardiac arrest, which may be reversible if addressed promptly. Since resuscitation techniques and emergency rescue systems are available to respond to victims of out-of-hospital cardiac arrest, which was uniformly fatal in the past, understanding the SCD problem has practical clinical importance.

Cardiovascular collapse is a general term connoting loss of sufficient cerebral blood flow to maintain consciousness due to acute dysfunction of the heart and/or peripheral vasculature. It may be caused by vasodepressor syncope (vasovagal syncope, postural hypotension with syncope, neurocardiogenic syncope, a transient severe bradycardia, or cardiac arrest. The latter is distinguished from the transient forms of cardiovascular collapse in that it usually requires an intervention to restore spontaneous blood flow. In contrast, vasodepressor syncope and other primary bradyarrhythmic syncopal events are transient and non-life-threatening, with spontaneous return of consciousness.

The most common electrical mechanism for cardiac arrest is ventricular fibrillation (VF), which is responsible for 50–80% of cardiac arrests. Severe persistent bradyarrhythmias, asystole, and pulseless electrical activity (PEA: organized electrical activity, unusually slow, without mechanical response, formerly called electromechanical dissociation [EMD]) cause another 20–30%. Pulseless sustained ventricular tachycardia (a rapid arrhythmia distinct from PEA) is a less common mechanism. Acute low cardiac output states, having a precipitous onset, also may present clinically as a cardiac arrest. These hemodynamic causes include massive acute pulmonary emboli, internal blood loss from a ruptured aortic aneurysm, intense anaphylaxis, and cardiac rupture with tamponade after myocardial infarction (MI). Sudden deaths due to these causes are not included in the SCD category.

Clinical, epidemiologic, and pathologic studies have provided information on the underlying structural abnormalities in victims of SCD and identified subgroups at high risk for SCD. In addition, studies of clinical physiology have begun to identify transient functional factors that may convert a long-standing underlying structural abnormality from a stable to an unstable state, leading to the onset of cardiac arrest (Table 29-2). 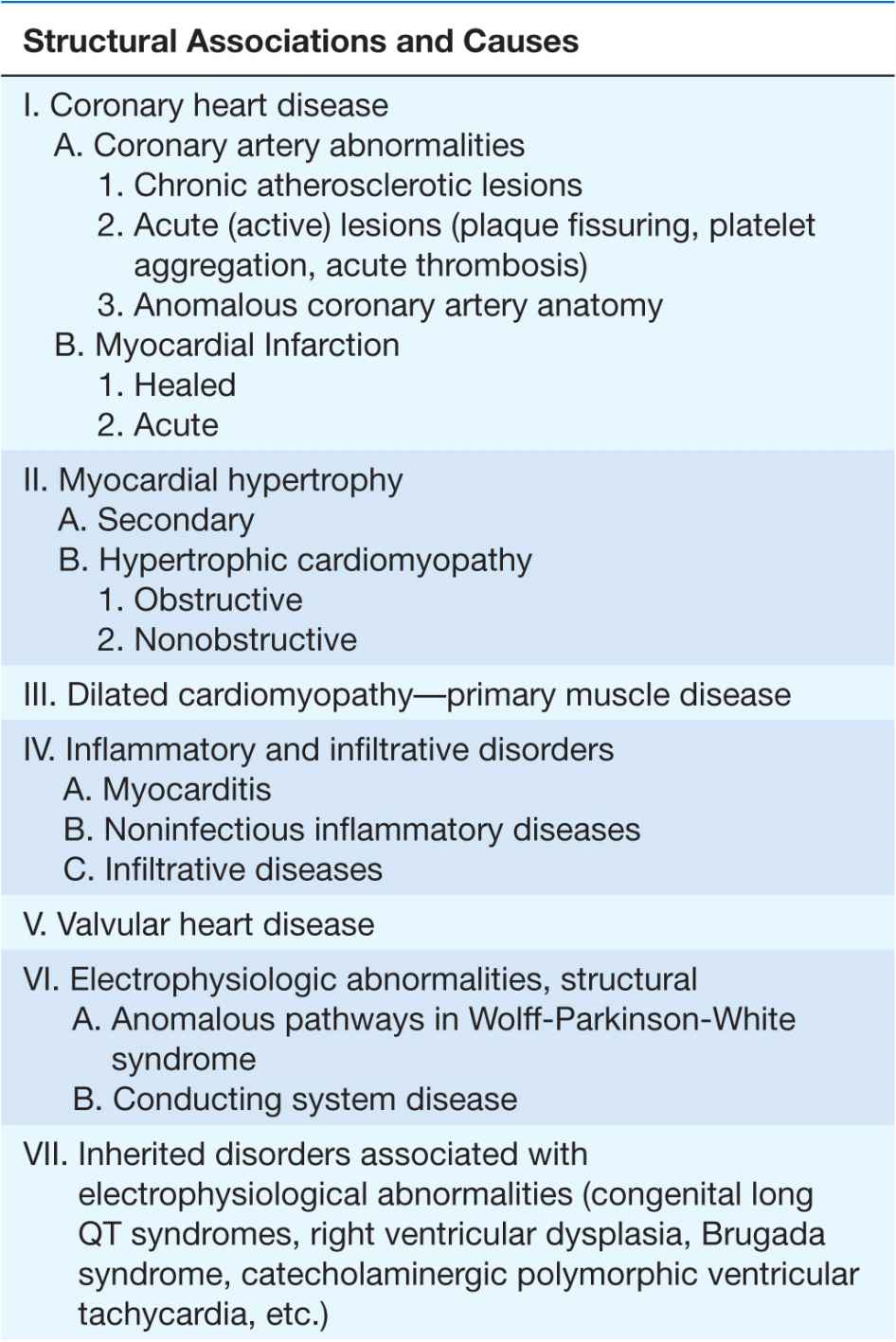 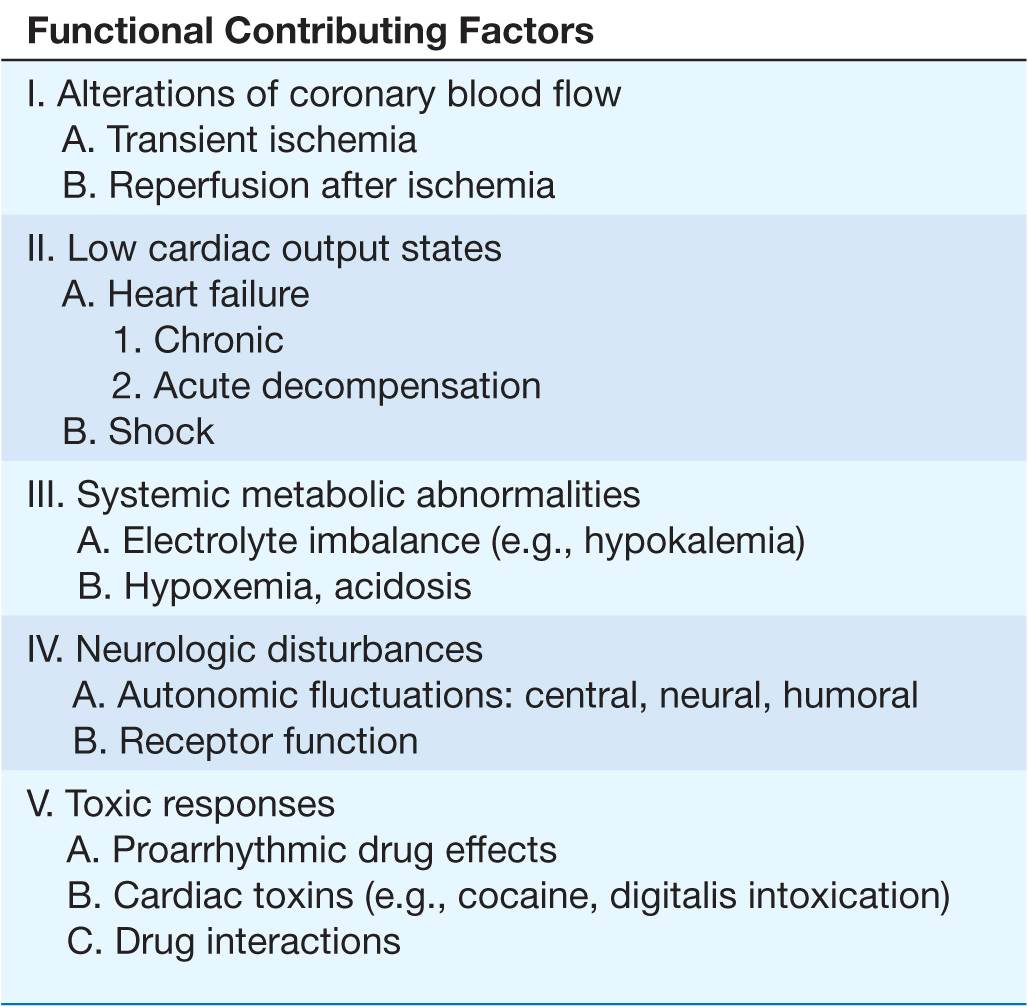 Cardiac disorders constitute the most common causes of sudden natural death. After an initial peak incidence of sudden death between birth and 6 months of age (the sudden infant death syndrome [SIDS]), the incidence of sudden death declines sharply and remains low through childhood and adolescence. Among adolescents and young adults, the incidence of SCD is approximately 1 per 100,000 population per year. The incidence begins to increase in adults over age 30 years, reaching a second peak in the age range 45–75 years, when it approximates 1–2 per 1000 per year among the unselected adult population. Increasing age within this range is associated with increasing risk for sudden cardiac death (Fig. 29-1A). From 1 to 13 years of age, only one of five sudden natural deaths is due to cardiac causes. Between 14 and 21 years of age, the proportion increases to 30%, and it rises to 88% in the middle-aged and elderly.

FIGURE 29-1
Panel A demonstrates age-related risk for SCD. For the general population age 35 years and older, SCD risk is 0.1–0.2% per year (1 per 500–1000 population). Among the general population of adolescents and adults younger than age 30 years, the overall risk of SCD is 1 per 100,000 population, or 0.001% per year. The risk of SCD increases dramatically beyond age 35 years. The greatest rate of increase is between 40 and 65 years (vertical axis is discontinuous). Among patients older than 30 years of age, with advanced structural heart disease and markers of high risk for cardiac arrest, the event rate may exceed 25% per year, and age-related risk attenuates. (Modified from Myerburg and Castellanos 2008, with permission of publisher.) Panel B demonstrates the incidence of SCD in population subgroups and the relation of total number of events per year to incidence figures. Approximations of subgroup incidence figures and the related population pool from which they are derived are presented. Approximately 50% of all cardiac deaths are sudden and unexpected. The incidence triangle on the left (“Percent/Year”) indicates the approximate percentage of sudden and nonsudden deaths in each of the population subgroups indicated, ranging from the lowest percentage in unselected adult populations (0.1–2% per year) to the highest percentage in patients with VT or VF during convalescence after an MI (approximately 50% per year). The triangle on the right indicates the total number of events per year in each of these groups to reflect incidence in context with the size of the population subgroups. The highest risk categories identify the smallest number of total annual events, and the lowest incidence category accounts for the largest number of events per year. EF, ejection fraction; VT, ventricular tachycardia; VF, ventricular fibrillation; MI, myocardial infarction. (After RJ Myerburg et al: Circulation 85:2, 1992.)

Young and middle-aged men and women have different susceptibilities to SCD, but the sex differences decrease with advancing age. The difference in risk for SCD parallels the differences in age-related risks for other manifestations of coronary heart disease (CHD) between men and women. As the gender gap for manifestations of CHD closes in the sixth to eighth decades of life, the excess risk of SCD in males progressively narrows. Despite the lower incidence among younger women, coronary risk factors such as cigarette smoking, diabetes, hyperlipidemia, and hypertension are highly influential, and SCD remains an important clinical and epidemiologic problem. The incidence of SCD among the African-American population appears to be higher than it is among the white population; the reasons remain uncertain.

Genetic factors contribute to the risk of acquiring CHD and its expression as acute coronary syndromes, including SCD. In addition, however, there are data suggesting a familial predisposition to SCD as a specific form of expression of CHD. A parental history of SCD as an initial coronary event increases the probability of a similar expression in the offspring. In a number of less common syndromes, such as hypertrophic cardiomyopathy, congenital long QT interval syndromes, right ventricular dysplasia, and the syndrome of right bundle branch block and nonischemic ST-segment elevations (Brugada syndrome), there is a specific inherited risk of ventricular arrhythmias and SCD (Chap. 16).

The structural causes of and functional factors contributing to the SCD syndrome are listed in Table 29-2. Worldwide, and especially in Western cultures, coronary atherosclerotic heart disease is the most common structural abnormality associated with SCD in middle-aged and older adults. Up to 80% of all SCDs in the United States are due to the consequences of coronary atherosclerosis. The nonischemic cardiomyopathies (dilated and hypertrophic, collectively; Chap. 14) account for another 10–15% of SCDs, and all the remaining diverse etiologies cause only 5–10% of all SCDs. The inherited arrhythmia syndromes (see earlier and Table 29-2) are proportionally more common causes in adolescents and young adults. For some of these syndromes, such as hypertrophic cardiomyopathy (Chap. 21), the risk of SCD increases significantly after the onset of puberty.

Data from postmortem examinations of SCD victims parallel the clinical observations on the prevalence of CHD as the major structural etiologic factor. More than 80% of SCD victims have pathologic findings of CHD. The pathologic description often includes a combination of long-standing, extensive atherosclerosis of the epicardial coronary arteries and unstable coronary artery lesions, which include various permutations of eroded, fissured, or ruptured plaques; platelet aggregates; hemorrhage; and/or thrombosis. As many as 70–75% of males who die suddenly have preexisting healed MIs, whereas only 20–30% have recent acute MIs, despite the prevalence of unstable plaques and thrombi. The latter suggests transient ischemia as the mechanism of onset. Regional or global left ventricular (LV) hypertrophy often coexists with prior MIs.

PREDICTION AND PREVENTION OF CARDIAC ARREST AND SUDDEN CARDIAC DEATH

SCD accounts for approximately one-half the total number of cardiovascular deaths. As shown in Fig. 29-1B, the very high-risk subgroups provide more focused populations (“percent per year”) for predicting cardiac arrest or SCD, but the representation of such subgroups within the overall population burden of SCD, indicated by the absolute number of events (“events per year”), is relatively small. The requirements for achieving a major population impact are effective prevention of underlying diseases and/or new epidemiologic probes that will allow better resolution of specific high-risk subgroups within the large general populations.

Strategies for predicting and preventing SCD are classified as primary and secondary. Primary prevention, as defined in various implantable defibrillator trials, refers to the attempt to identify individual patients at specific risk for SCD and institute preventive strategies. Secondary prevention refers to measures taken to prevent recurrent cardiac arrest or death in individuals who have survived a previous cardiac arrest. A third category consists of interventions intended to abort sudden cardiac arrests, thus avoiding their progression to death. This focuses primarily on out-of-hospital response strategies.

The primary prevention strategies currently used depend on the magnitude of risk among the various population subgroups. Because the annual incidence of SCD among the unselected adult population is limited to 1–2 per 1000 population per year (Fig. 29-1) and >30% of all SCDs due to coronary artery disease occur as the first clinical manifestation of the disease (Fig. 29-2A), the only currently practical strategies are profiling for risk of developing CHD and risk factor control (Fig. 29-2B). The most powerful long-term risk factors include age, cigarette smoking, elevated serum cholesterol, diabetes mellitus, elevated blood pressure, LV hypertrophy, and nonspecific electrocardiographic abnormalities. Markers of inflammation (e.g., levels of C-reactive protein) that may predict plaque destabilization have been added to risk classifications. The presence of multiple risk factors progressively increases incidence, but not sufficiently or specifically enough to warrant therapies targeted to potentially fatal arrhythmias (Fig. 29-1A). However, recent studies offer the hope that genetic markers for specific risk may become available. These studies suggest that a family history of SCD associated with acute coronary syndromes predicts a higher likelihood of cardiac arrest as the initial manifestation of coronary artery disease in first-degree family members. 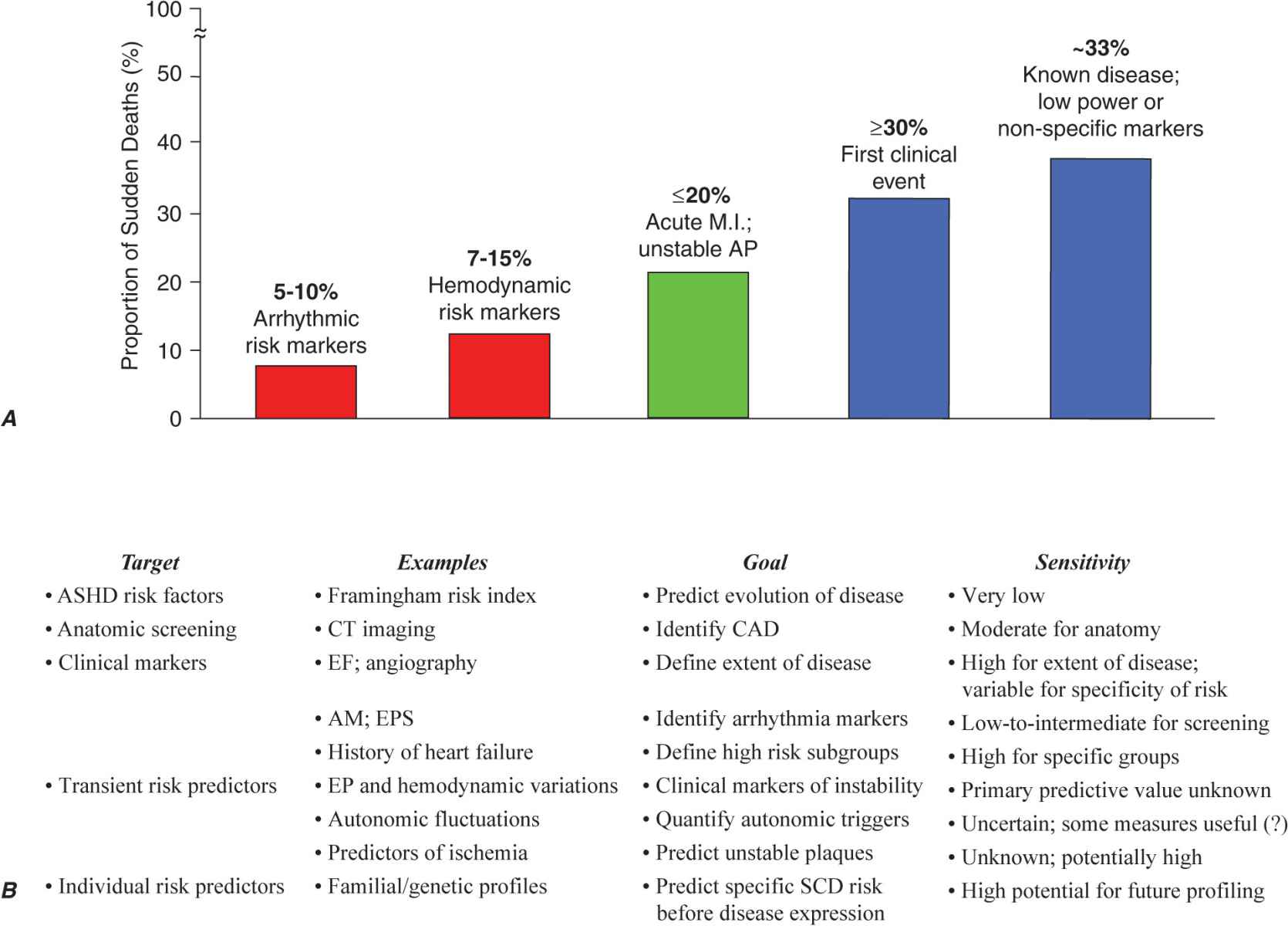