NORMAL FUNCTIONS OF THE PERICARDIUM

The normal pericardium is a double-layered sac; the visceral pericardium is a serous membrane that is separated by a small quantity (15–50 mL) of fluid, an ultra-filtrate of plasma, from the fibrous parietal pericardium. The normal pericardium, by exerting a restraining force, prevents sudden dilation of the cardiac chambers, especially the right atrium and ventricle, during exercise and with hypervolemia. It also restricts the anatomic position of the heart, minimizes friction between the heart and surrounding structures, prevents displacement of the heart and kinking of the great vessels, and probably retards the spread of infections from the lungs and pleural cavities to the heart. Nevertheless, total absence of the pericardium, either congenital or after surgery, does not produce obvious clinical disease. In partial left pericardial defects, the main pulmonary artery and left atrium may bulge through the defect; very rarely, herniation and subsequent strangulation of the left atrium may cause sudden death.

Acute pericarditis, by far the most common pathologic process involving the pericardium, may be classified both clinically and etiologically (Table 22-1). There are four principal diagnostic features: 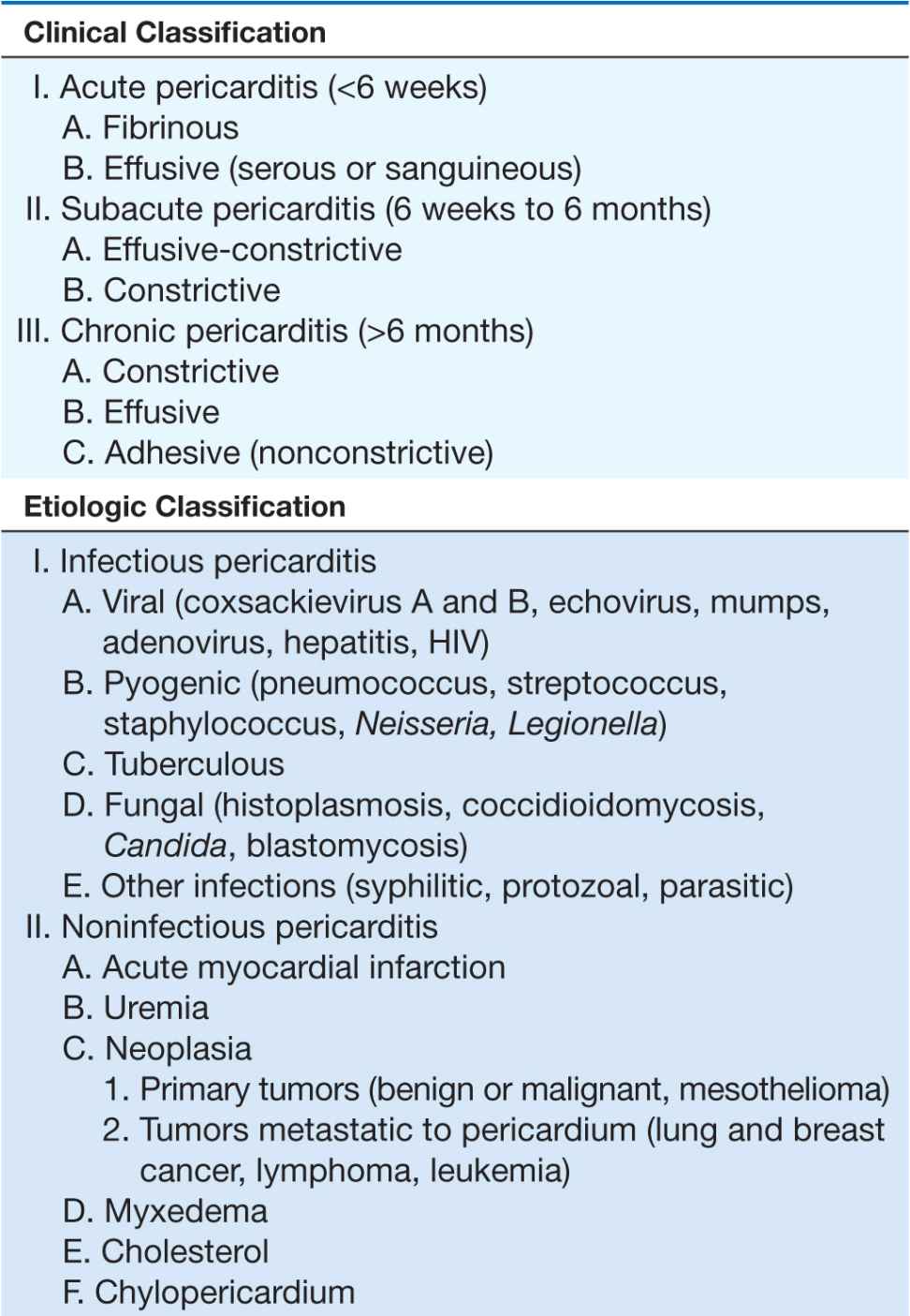 1. Chest pain is an important but not invariable symptom in various forms of acute pericarditis (Chap. 4); it is usually present in the acute infectious types and in many of the forms presumed to be related to hypersensitivity or autoimmunity. Pain is often absent in slowly developing tuberculous, post-irradiation, neoplastic, and uremic pericarditis. The pain of acute pericarditis is often severe, retrosternal and left precordial, and referred to the neck, arms, or left shoulder. Often the pain is pleuritic, consequent to accompanying pleural inflammation (i.e., sharp and aggravated by inspiration and coughing), but sometimes it is a steady, constricting pain that radiates into either arm or both arms and resembles that of myocardial ischemia; therefore, confusion with acute myocardial infarction (AMI) is common. Characteristically, however, pericardial pain may be relieved by sitting up and leaning forward and is intensified by lying supine. The differentiation of AMI from acute pericarditis becomes perplexing when, with acute pericarditis, serum biomarkers of myocardial damage such as creatine kinase and troponin rise, presumably because of concomitant involvement of the epicardium in the inflammatory process (an epi-myocarditis) with resulting myocyte necrosis. However, these elevations, if they occur, are quite modest given the extensive electrocardiographic ST-segment elevation in pericarditis. This dissociation is useful in differentiating between these conditions.

2. A pericardial friction rub is audible in about 85% of these patients, may have up to three components per cardiac cycle, is high pitched, and is described as rasping, scratching, or grating (Chap. 9); it can be elicited sometimes when the diaphragm of the stethoscope is applied firmly to the chest wall at the left lower sternal border. It is heard most frequently at end expiration with the patient upright and leaning forward. The rub is often inconstant, and the loud to-and-fro leathery sound may disappear within a few hours, possibly to reappear on the next day. A pericardial rub is heard throughout the respiratory cycle, whereas a pleural rub disappears when respiration is suspended.

3. The electrocardiogram (ECG) in acute pericarditis without massive effusion usually displays changes secondary to acute subepicardial inflammation (Fig. 22-1). It typically evolves through four stages. In stage 1, there is widespread elevation of the ST segments, often with upward concavity, involving two or three standard limb leads and V2 to V6, with reciprocal depressions only in aVR and sometimes V1, as well as depression of the PR segment below the TP segment reflecting atrial involvement. Usually, there are no significant changes in QRS complexes. In stage 2, after several days, the ST segments return to normal, and only then, or even later, do the T waves become inverted (stage 3). Ultimately, weeks or months after the onset of acute pericarditis, the ECG returns to normal in stage 4. In contrast, in AMI, ST elevations are convex, and reciprocal depression is usually more prominent; QRS changes occur, particularly the development of Q waves, as well as notching and loss of R-wave amplitude, and T-wave inversions are usually seen within hours before the ST segments have become isoelectric. Sequential ECGs are useful in distinguishing acute pericarditis from AMI. In the latter, elevated ST segments return to normal within hours (Chaps. 34 and 35).

FIGURE 22-1
Acute pericarditis often produces diffuse ST-segment elevations (in this case in leads I, II, aVF, and V2 to V6) due to a ventricular current of injury. Note also the characteristic PR-segment deviation (opposite in polarity to the ST segment) due to a concomitant atrial injury current.

Early repolarization is a normal variant and may also be associated with widespread ST-segment elevation, most prominent in left precordial leads. However, in this condition the T waves are usually tall and the ST/T ratio is <0.25; importantly, this ratio is higher in acute pericarditis.

4. Pericardial effusion is usually associated with pain and/or the ECG changes mentioned earlier, as well as with an enlargement of the cardiac silhouette. Pericardial effusion is especially important clinically when it develops within a relatively short time as it may lead to cardiac tamponade (see later). Differentiation from cardiac enlargement may be difficult on physical examination, but heart sounds may be fainter with pericardial effusion. The friction rub may disappear, and the apex impulse may vanish, but sometimes it remains palpable, albeit medial to the left border of cardiac dullness. The base of the left lung may be compressed by pericardial fluid, producing Ewart’s sign, a patch of dullness and increased fremitus (and egophony) beneath the angle of the left scapula. The chest roentgenogram may show a “water bottle” configuration of the cardiac silhouette (Fig. 22-2) but may be normal. 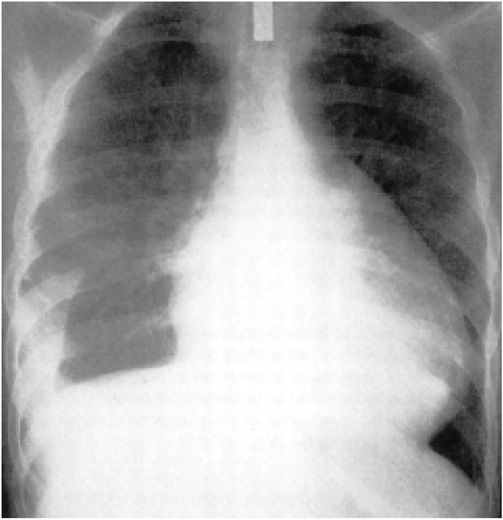 Echocardiography (Chap. 12) is the most widely used imaging technique since it is sensitive, specific, simple, and noninvasive; may be performed at the bedside; and can identify accompanying cardiac tamponade (see later) (Fig. 22-3). The presence of pericardial fluid is recorded by two-dimensional transthoracic echocardiography as a relatively echo-free space between the posterior pericardium and left ventricular epicardium in patients with small effusions and as a space between the anterior right ventricle and the parietal pericardium just beneath the anterior chest wall in those with larger effusions. In the latter, the heart may swing freely within the pericardial sac. When severe, the extent of this motion alternates and may be associated with electrical alternans. Echocardiography allows localization and estimation of the quantity of pericardial fluid. 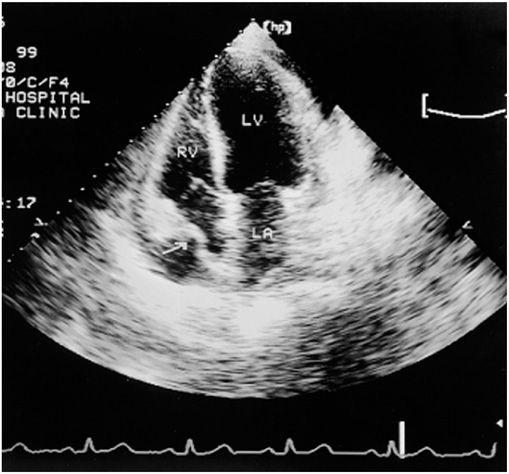 The diagnosis of pericardial fluid or thickening may be confirmed by computed tomography (CT) or magnetic resonance imaging (MRI) (Fig. 22-4). These techniques may be superior to echocardiography in detecting loculated pericardial effusions, pericardial thickening, and the presence of pericardial masses. 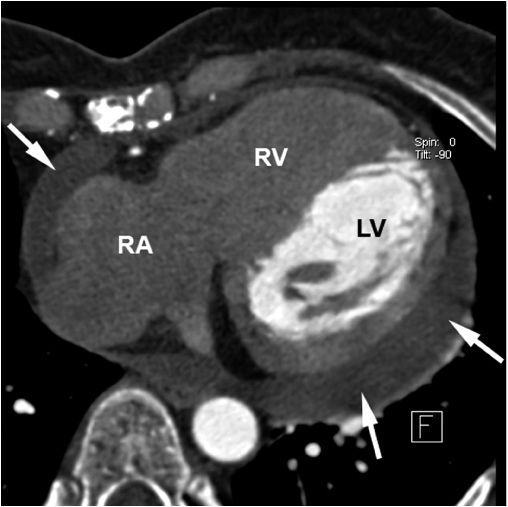 The accumulation of fluid in the pericardial space in a quantity sufficient to cause serious obstruction to the inflow of blood to the ventricles results in cardiac tamponade. This complication may be fatal if it is not recognized and treated promptly. The three most common causes of tamponade are neoplastic disease, idiopathic pericarditis, and renal failure. Tamponade may also result from bleeding into the pericardial space after cardiac operations, trauma, and treatment of patients with acute pericarditis with anticoagulants.

The three principal features of tamponade (Beck’s triad) are hypotension, soft or absent heart sounds, and jugular venous distention with a prominent x descent but an absent y descent. There are both limitation of ventricular filling and reduction of cardiac output. The quantity of fluid necessary to produce this critical state may be as small as 200 mL when the fluid develops rapidly or >2000 mL in slowly developing effusions when the pericardium has had the opportunity to stretch and adapt to an increasing volume. Tamponade may also develop more slowly, and in these circumstances the clinical manifestations may resemble those of heart failure, including dyspnea, orthopnea, and hepatic engorgement. A high index of suspicion for cardiac tamponade is required since in many instances no obvious cause for pericardial disease is apparent, and it should be considered in any patient with otherwise unexplained enlargement of the cardiac silhouette, hypotension, and elevation of jugular venous pressure. There may be reduction in amplitude of the QRS complexes, and electrical alternans of the P, QRS, or T waves should raise the suspicion of cardiac tamponade. 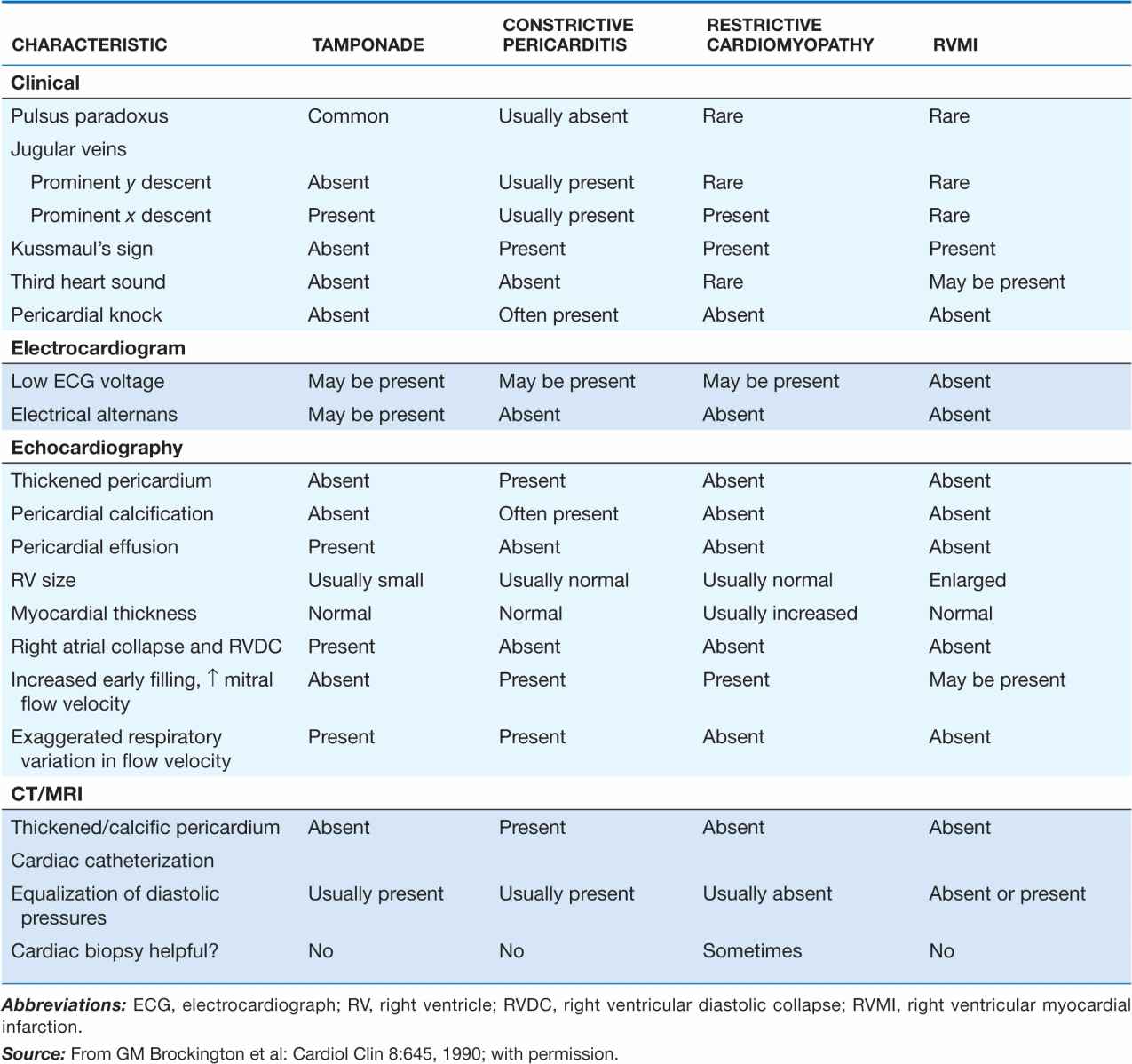 This important clue to the presence of cardiac tamponade consists of a greater than normal (10 mmHg) inspiratory decline in systolic arterial pressure. When severe, it may be detected by palpating weakness or disappearance of the arterial pulse during inspiration, but usually sphygmomanometric measurement of systolic pressure during slow respiration is required.

Paradoxical pulse occurs not only in cardiac tamponade but also in approximately one-third of patients with constrictive pericarditis (see later). This physical finding is not pathognomonic of pericardial disease because it may be observed in some cases of hypovolemic shock, acute and chronic obstructive airway disease, and pulmonary embolus.

Low-pressure tamponade refers to mild tamponade in which the intrapericardial pressure is increased from its slightly subatmospheric levels to +5 to +10 mmHg; in some instances, hypovolemia coexists. As a consequence, the central venous pressure is normal or only slightly elevated, whereas arterial pressure is unaffected and there is no paradoxical pulse. These patients are asymptomatic or complain of mild weakness and dyspnea. The diagnosis is aided by echocardiography, and both hemodynamic and clinical manifestations improve after pericardiocentesis.

Since immediate treatment of cardiac tamponade may be lifesaving, prompt measures to establish the diagnosis by echocardiography should be undertaken (Fig. 22-3). When pericardial effusion causes tamponade, Doppler ultrasound shows that tricuspid and pulmonic valve flow velocities increase markedly during inspiration, whereas pulmonic vein, mitral, and aortic flow velocities diminish. Often the right ventricular cavity is reduced in diameter, and there is late diastolic inward motion (collapse) of the right ventricular free wall and the right atrium. Transesophageal echocardiography may be necessary to diagnose a loculated or hemorrhagic effusion responsible for cardiac tamponade.