Normal ECG patterns in the chest and extremity leads were discussed in Chapter 4. The general terms horizontal heart (or horizontal QRS axis) and vertical heart (or vertical QRS axis) were used to describe the normal variations in QRS patterns seen in the extremity leads. In this chapter the concept of electrical axis is refined, and methods are presented for estimating the QRS axis quickly and simply. 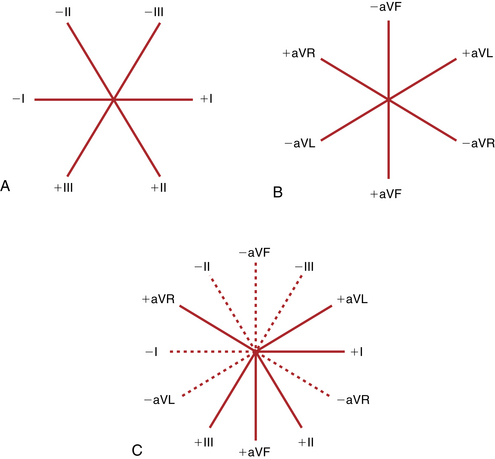 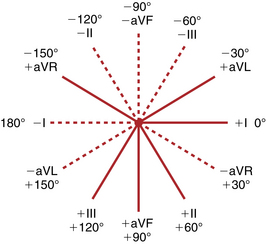 Figure 5-2 In the hexaxial lead diagram, notice that each lead has an angular designation, with the positive pole of lead I at 0°. All leads above lead I have negative angular values, and the leads below it have positive values.

In calculating the mean QRS axis, you are answering this question: In what general direction or toward which lead axis is the QRS complex predominantly oriented? In Figure 5-3, for example, notice the tall R waves in leads II, III, and aVF. These waves indicate that the heart is electrically vertical (vertical electrical axis). Furthermore, the R waves are equally tall in leads II and III.∗ Therefore, by simple inspection the mean electrical QRS axis can be seen to be directed between the positive poles of leads II and III and toward the positive pole of lead aVF (+90°). 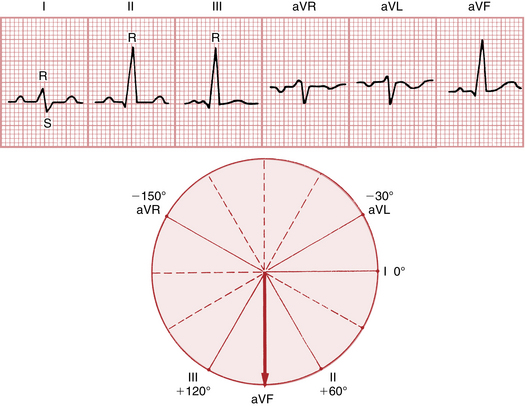 As a general rule, the mean QRS axis points midway between any two leads that show tall R waves of equal height.

In Figure 5-3 the mean electrical axis could have been calculated a second way. Recall from Chapter 3 that if a wave of depolarization is oriented at right angles to any lead axis, a biphasic complex (RS or QR) is recorded in that lead. Reasoning in a reverse manner, if you find a biphasic complex in any of the extremity leads, the mean QRS axis must be directed at 90° to that lead. Now look at Figure 5-3 again. Do you see any biphasic QRS complexes? Obviously, lead I is biphasic and shows an RS pattern. Therefore, the mean electrical axis must be directed at right angles to lead I. Because lead I on the hexaxial lead scale is at 0°, the mean electrical axis must be at right angles to 0° or at either –90° or +90°. If the axis were –90°, the depolarization forces would be oriented away from the positive pole of lead aVF and that lead would show a negative complex. In Figure 5-3, however, lead aVF shows a positive complex (tall R wave); therefore the axis must be +90°.

Figure 5-4 presents another example. By inspection the mean QRS axis is obviously horizontal, because leads I and aVL are positive and leads II, III, and aVF are predominantly negative. The precise electrical axis can be calculated by looking at lead II, which shows a biphasic RS complex. Therefore the axis must be at right angles to lead II. Because lead II is at +60° on the hexaxial scale (see Fig. 5-2), the axis must be either –30° or +150°. If it were +150°, leads II, III, and aVF would be positive. Clearly the axis is –30°. 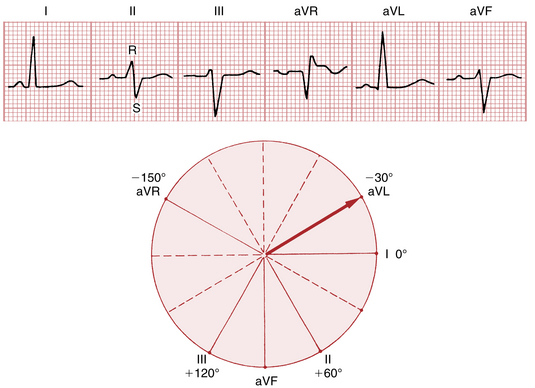 Another example is given in Figure 5-5. The QRS complex is positive in leads II, III, and aVF. Therefore the axis is relatively vertical. Because the R waves are of equal magnitude in leads I and III, the mean QRS axis must be oriented between these two leads, or at +60°. 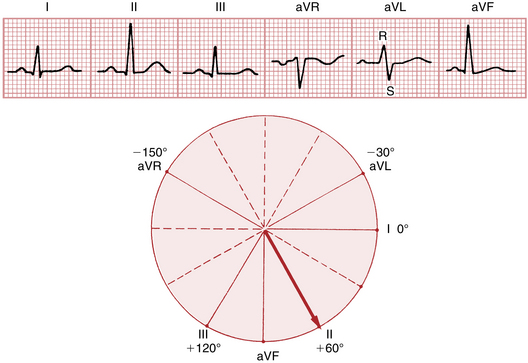