Relation between dyssynchrony and cardiac output

Typically a widened QRS on the EKG has been considered a surrogate for LV dyssynchrony. Hawkins and their group noted increasing prevalence of dyssynchrony with prolongation of QRS duration [22]. Data from the Vesnarinone (VEST) study has revealed that QRS duration was directly correlated to mortality as noted in Fig. 7.2. Prolongation of QRS (>120 ms) is widely accepted as occurring in about 30 % of patients with HF [23, 24]. It is a significant predictor of LV systolic dysfunction in HF with an inverse correlation between QRS length and left ventricular ejection fraction (LVEF) [24–26]. Xiao et al. showed that early mortality was observed in those with larger increase in QRS duration and the time to death from QRS reaching 160 ms was significantly shorter in those without an implanted pacemaker in comparison to those who had one [27]. Multiple studies have confirmed the higher incidence of sudden cardiac death in HF patients with prolonged QRS complex. In an effort to determine the optimal QRS duration that stratifies HF patients into higher and low risk for increased mortality or need for transplantation, Kalra and his group determined that patients with a QRS duration ≥120 ms were associated with a threefold risk and a significantly low 5-year survival rate [25]. Most large-scale trials have considered QRS length >120 ms as part of their inclusion criteria, thus offering the benefit of application in clinical scenarios.

Given the mounting evidence of dyssynchrony contributing to LV dysfunction, Cazeau and colleagues used CRT to improve the functional ­status of a patient who presented with HF with conduction abnormalities [28]. This led to further attempts to reverse dyssynchrony with the aid of pacing leads and spurred a new era of therapeutic application. CRT typically involves placement of pacing leads in the right atrium (RA), right ventricle (RV), and the lateral branch of the coronary sinus (Fig. 7.3). This placement in the branch of the coronary sinus is an attempt to pace the lateral wall of the LV, and hence it is often called the LV lead. With this approach, simultaneous and synchronized pacing of the ventricles can be ­performed to reduce dyssynchrony so as to simulate a physiological depolarization as seen in a healthy normal myocardium. An alternate approach is to pace the LV lateral wall with appropriate AV delay with the intent to merge with the wave originating through intrinsic activation of the RV, thus resulting in a coordinated contractile movement. 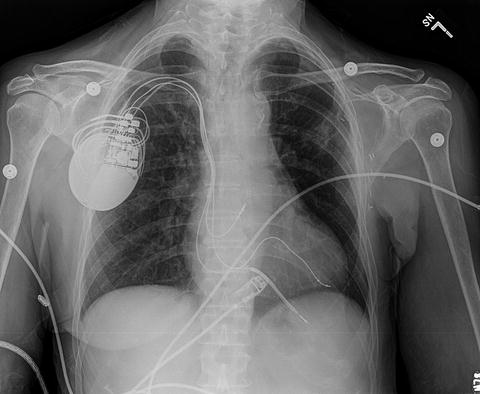 Chest X-ray revealing typical lead placement
The ability to program the device in a manner such that AV interval can be adjusted so as to pace the ventricles without significant delay has been shown to optimize left ventricular filling (therefore preload) and reduction in presystolic mitral regurgitation [29]. The principle of biventricular pacing is to reverse the intraventricular dyssynchrony by timing the RV and LV pacing so as to encourage simultaneous contractility of the septal and lateral wall segments. The added ­ability to offset the timing of RV and LV pacing seen in newer devices has been proven to be more beneficial than simultaneous pacing of the ventricular leads [30]. Lateral wall is the site ­preferred for the LV lead placement since coronary sinus provides easy access to the free wall. Compared to other sites, lateral wall provides best response in terms of percentage change in pulse pressure and LV dP/dt and the maximal area where this can be effectively achieved [31, 32].
The acute hemodynamic effects are noted shortly after CRT initiation. Improvements in ­systolic blood pressure, peak dP/dt, EF, and finally cardiac output with associated decline in pulmonary capillary wedge pressures have been established by invasive hemodynamic ­monitoring [33]. This is achieved with coordinated contractile function resulting in improvement of ejection fraction as evidenced by improvement in stroke volume and reduction in LV end-systolic volume. The near elimination of functional mitral regurgitation by normalization of mitral valve timing has been known to contribute to reversing the geometrical changes due to disease progression [34, 35]. The clinical effects of these changes were clearly shown in large-scale randomized clinical trials which measured surrogate markers such as NYHA class, QoL, and 6-min walk test [11–13, 16, 35–37].
The long-term benefits of CRT were evident by the progressive reduction in LV cavity volume and LV mass since the initiation of pacing as revealed by the long-term follow-up of several randomized trials (MUSTIC, PATH-CHF, CONTAK-CD, MIRACLE, CARE-HF, REVERSE). The change in hemodynamics with reduction of mitral regurgitation enabled an alteration of LV cavity shape from a globular appearance to more physiological ellipsoid appearance [38]. Importantly, Yu and his group showed the reversal of these changes with discontinuation of CRT thereby highlighting the fact that these changes were independent from that occurs as a result of concomitant use of drugs (β-blockers, angiotensin converting enzyme [ACE] inhibitors, angiotensin receptor blockers [ARB]) [39]. Notably those with depressed EF as a result of nonischemic etiology showed sustained evidence of reversal of ventricular remodeling compared to those with ischemic cardiomyopathy [40]. This is perhaps attributed to the loss of viable myocardium as a result of repeated ischemia. Improvement in these cardiac measures contributed to the reduction in mortality besides the improvement in symptoms that were observed in the COMPANION and CARE-HF trials.

Evidence from the Trials

Since the observation of augmented cardiac performance with CRT, various trials have been undertaken to corroborate those findings. The early observational studies were limited in their sample size where the patient served both as the case as well as the control. The data from the randomized controlled trials have convincingly substantiated the role of CRT in HF management, given that nearly 5,000 patients have been evaluated to date.
A summary of the major trials is noted in Table 7.1, and how they guided standard of care is reviewed below.

Effect of CRT on mortality rate

Effect of CRT on HF hospitalization

Effect of CRT on quality of life

Effect of CRT on pVO2

Effect of CRT on HF clinical composite response
Given the insurmountable evidence provided by these trials, major cardiology societies (American Heart Association/American College of Cardiology (AHA/ACC), European Society of Cardiology) have stated CRT as class I indications in heart ­failure patients who are optimized on medical management and fulfill all of the following:

Despite these guidelines, a recent study by Hernandez et al. revealed that one in ten patients with CRT implantation has received the devices outside its current recommendations [46]. The researchers hypothesized that a small number of this could be possibly explained by the prophylactic implantation of biventricular pacemaker instead of RV pacing with the intent to prevent systolic dysfunction among those with EF  >  35 % as supported by the post AV nodal ablation evaluation (PAVE) trial [47]. Since the update to the AHA/ACC guidelines, results from the “resynchronization reverses remodeling in systolic left ventricular dysfunction” (REVERSE) trial have shed light into the benefit of CRT to patients with HF who are either asymptomatic or have mild symptoms. This randomized control trial evaluated the benefit of CRT (with or without a defibrillator) in patients with systolic HF on optimum drug therapy with an EF  ≤  40 % and QRS duration ≥120 ms who belong to NYHA class I or II. The primary end point in this study was clinical composite response for HF stated as worsened, unchanged, or improved. Due to the inclusion of asymptomatic patients, a proportional analysis was performed as a marker for efficacy. Twenty-one percent in the group with no CRT worsened in comparison to 16 % in the CRT group, but this did not achieve statistical significance. However the time to hospitalization was delayed in the CRT group with added evidence of reversal of LV remodeling noted increasingly in this arm as evidenced by marked improvement in the LV end-systolic volume index [48]. Though this study was not devised to analyze mortality, one can speculate that the evidence of reversal of remodeling may contribute to reduction in mortality. Ongoing trials such as Multicenter Automatic Defibrillator Implantation Trial with CRT (MADIT-CRT) and Resynchronization/Defibrillation for Ambulatory Heart Failure Trial (RAFT) are designed to address mortality benefit in mild HF patients.
Only gold members can continue reading. Log In or Register to continue