The TAH replaces both native ventricles with separate right and left prosthetic ventricles that are lined with smooth segmented polyurethane. The polyurethane diaphragm is four layered, a safety feature. Both artificial ventricles together weigh 160 g and displace 400 mL. This orthotopic biventricular pneumatic pump can pump a maximum in vivo output of 9–10 L/min at a central venous pressure (CVP) of <10 mm Hg. The maximal stroke volume is 70 mL, but 99 % of the time the device is run using a fill volume of about 50–60 mL per stroke, and it fully ejects with each beat (Fig. 13.2a, b).

(a) This shows pump diastole or filling. Partial filling allows for increased venous return scenarios (exercise, right left imbalance, Valsalva maneuver, etc.). The driver console beat rate % systole and vacuum are set to allow filling with about 50–60 mL/beat with the patient at rest. (b) Ejection pressures are set to always cause a maximal diaphragm excursion (“full eject”). For the left ventricle, the ejection pressure is set at 60 mm Hg greater than the anticipated systolic pressure. For the right ventricle, the ejection pressure is set at 30 mm Hg higher than the anticipated pulmonary artery pressure
The blood flow path is the same as the native heart with an inflow distance from atrium to device of less than 5 mm and a blood path from left atrium to aorta or right atrium to pulmonary artery of less than 20 cm. The implantable ventricles contain Medtronic Hall (Medtronic, Inc., Minneapolis, MN) valves that are 27 cm on the inflow side and 25 cm on the outflow side. The outflow conduits are made of Dacron (Maquet, Chicago, IL) and measure 3 cm from the ventricular outflow valve to the aorta and 6 cm from right ventricular outflow to the pulmonary artery (Fig. 13.3). 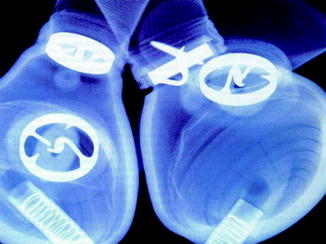 Radiograph of the CardioWest TAH-t ventricles showing the 27 mm diameter inflow and 25 mm diameter outflow valves, the four-layered diaphragm, the plastic cases, and the spiral wound drive lines
The principles of cardiac physiology and the Starling curve are clearly evident with the TAH. Since the ventricles are set to fill to about 50–60 mL per beat, the patient can have an increased venous return of 10–20 mL per beat (for a total of 70 mL) for such circumstances as exercise, when the patient would have an increased venous return and in turn increased stroke volume and increased cardiac output by 1.5–2.5 L/min. The drivers are set to allow filling the ventricles to 70–85 % of full capacity with an ejection of 100 %. The decreased filling allows the pneumatic ventricles to accommodate for differences in left and right ventricular volumes that occur with such conditions as bronchial flow, coughing, Valsalva maneuvers, exercise, and transfusion. Also, this characteristic of the device prevents “overpumping” of the right to left ventricle, which, therefore, prevents pulmonary edema. In the non-pneumatic, electromechanical, and hydroelectric experimental TAHs, no such forgiving pneumatic “cushion” exists and balancing the ventricles continues to be a major challenge.

In 2004, the results of the FDA IDE study for the SynCardia TAH-t in bridge-to-transplantation were published in the New England Journal of Medicine. The prospective study was conducted from January 1993 to September 2002 with a total of 130 patients: 81 patients in the protocol group, 35 retrospective control group, and 14 did not meet the criteria for the study though were implanted for the purpose of compassionate care. In that study, the indication for implantation was severe end-stage biventricular failure in patients who were considered reasonable candidates for cardiac transplantation. Thus, most patients had been listed for cardiac transplantation then decompensated and were felt to be too sick to be treated with a left ventricular assist device (LVAD). When we examined risk factors in this study [7], we concluded that the indications for implantation of the TAH are “(1) irreversible biventricular heart failure, (2) acute decompensation after cardiotomy, (3) cardiogenic shock after acute myocardial infarction, (4) stone heart, (5) irreversible cardiac rejection or graft failure, (6) failed LVAD and/or biventricular assist device (BiVAD), (7) decompensating heart failure with left ventricular thrombus, (8) acquired ventricular septal defect, (9) prosthetic or incompetent native aortic valve in cardiogenic shock, or (10) unresponsive ventricular arrhythmia.”
The most important criterion for implantation of a TAH is availability of the device at the institution as well as the surgeon’s experience. The patients must be candidates for a cardiac transplantation. Destination therapy as an indication for this device is likely to be covered in the near future, since it has been approved by the FDA and awaits final funding approval.
In the FDA study the selection inclusion criteria for the patients were fairly rigid. However, nearly 20 % of patients could not be weaned from cardiopulmonary bypass prior to device implant, and nearly 40 % were on intra-aortic balloon pump support, and 40 % had a history of prior cardiac surgery, and the mean creatinine was 1.7 mg/dL and bilirubin 2.0 mg/dL preimplantation (see Table 13.1).


Thus, patients that qualify for implantation of the TAH have severe biventricular disease, typically have multiple-system organ failure, and are at imminent risk of death. Copeland et al. ­compared the use of the LVAD, BiVAD, and TAH [8]. In this retrospective study, 75 % of TAH patients survived to transplantation as compared with 56 % of those on Novacor LVADs (Novacor, WorldHeart Inc., Ottawa, Ontario, Canada) and 38 % of those on Thoratec BiVADs (Thoratec Inc. Pleasanton, CA). A multivariate analysis that reported risk factors for the CardioWest TAH and compared them with similar studies of LVADs and BiVADs [7], concluded that the TAH was preferred for patients who had been diagnosed with renal and hepatic dysfunction, had elevated venous pressure, right heart failure, required mechanical ventilation, and had a previous cardiac operation. The TAH significantly decreased the CVP and increased the systemic pressure, which, in turn, lead to increase in the organ perfusion pressure reversing multiple-system end-organ failure. The TAH is an excellent alternative for patients who are refractory to medical therapy and at high risk for an LVAD or BiVAD.
At La Pitie, LePrince et al. evaluated the use of the CardioWest TAH over a 15-year experience [9], from 1986 to 2001 in 127 patients. The study concluded that CardioWest TAH was the device of choice for those patients who are truly sick with biventricular failure as a bridge-to-transplantation. They reported a low incidence of neurological events. This success can be attributed to the anticoagulation protocol. This will be further discussed in detail later in this chapter. Furthermore, LePrince et al. noted that a small body size correlated with a higher rate of death for these patients.
In addition, at Bad Oeynhausen, Morshuis et al. [10] reported a 5-case series that showed that the CardioWest TAH could also be used successfully for an acute myocardial infarction for a patient in cardiogenic shock. They noticed that approximately 7 % who are diagnosed with a myocardial infarction develop cardiogenic shock. In this case study, Morshuis et al. noted a hospital mortality of 60–100 % with medical therapy. By the time the patient develops cardiogenic shock, it is too late to save the infarcted myocardium with medical therapy or stenting. Thus, mechanical circulatory support systems are excellent options, especially the TAH. The SynCardia TAH-t was shown to have higher pump flows than other BiVADs. In comparison, patients with cardiogenic shock are not accustomed to the severely decreased perfusion systemically and thus, the TAH with higher pump flows prevented the systemic decreased perfusion to multiple organ systems. The Bad Oeynhausen team was also able to stop the use of catecholamines which also further damage multiple organ systems. There is a risk of failure of recovery with VADs and in turn thrombosis of the ventricle which is easily prevented with the use of the TAH because the native ventricles are completely removed. Morshuis et al. concluded that the TAH “represents the only life-saving therapeutic option in patients with irreversible cardiogenic shock.”
Along with the indications for patient selection, a surgeon must evaluate other factors prior to implantation. The following size factors that significantly improve the outcome for patients prior to implantation of TAH are body surface area (BSA) ≥2 m2, left ventricular end-diastolic dimension of ≥70 mm, anterior posterior diameter of the heart at the level of T10 on computed tomography (CT) scan of ≥10 cm from the inner table of the sternum to the anterior edge of the T10 vertebra, and a calculated native heart volume by CT scan of ≥1500 mL; these are factors that give assurance that the SynCardia TAH-t will fit into the recipient and function normally. A risk factor analysis taken from the FDA study of the SynCardia TAH-t found several factors that increased the risk of death [7] (see Tables 13.2 and 13.3).