As discussed in other chapters in this text (see Chaps. 18, 19, 20, 21, 22, 23, 24, 25), the relatively low-cost chest radiograph is less commonly used as a primary diagnostic technique for determining the presence and severity of cardiac disease even when it provides diagnostic information (eg, pulmonary venous hypertension).

With the development of many new cardiac imaging techniques, familiarity with the altered anatomy and understanding of the underlying pathophysiology of a diseased heart are the cornerstones to appropriate interpretation of its radiographic manifestations. The conventional four-view cardiac series is tabulated in Table 17–1 and the views are illustrated in Fig.17–1C–F. 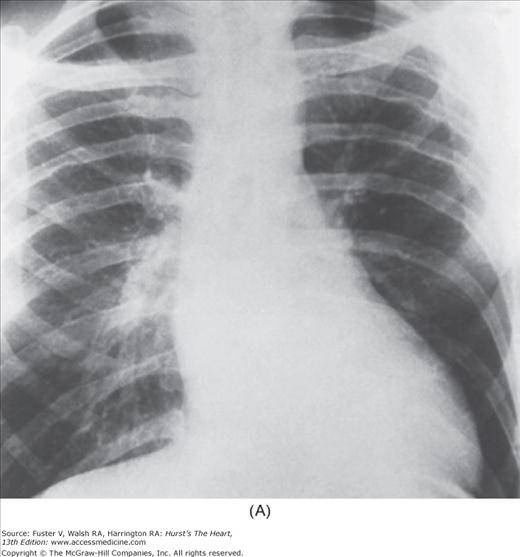 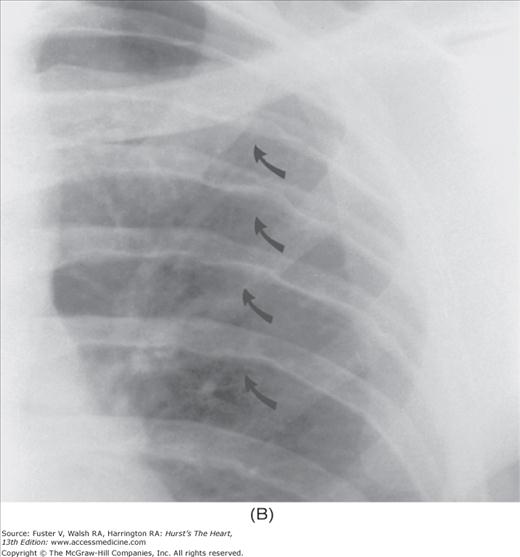 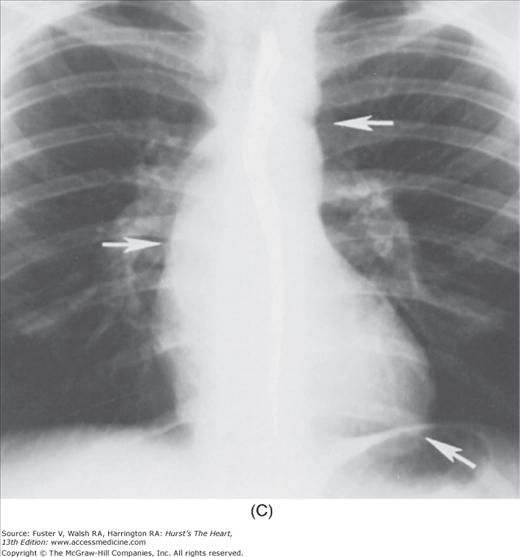 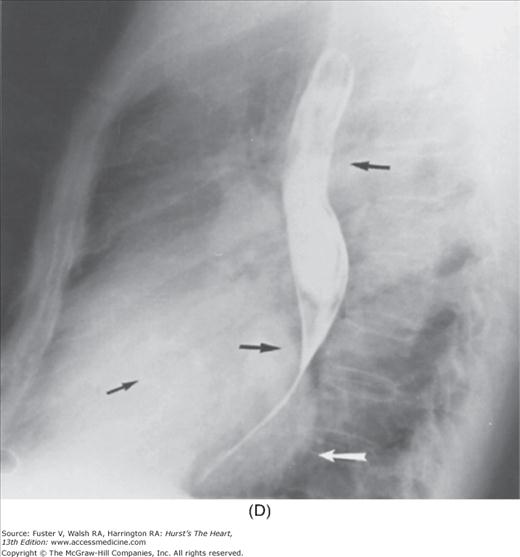 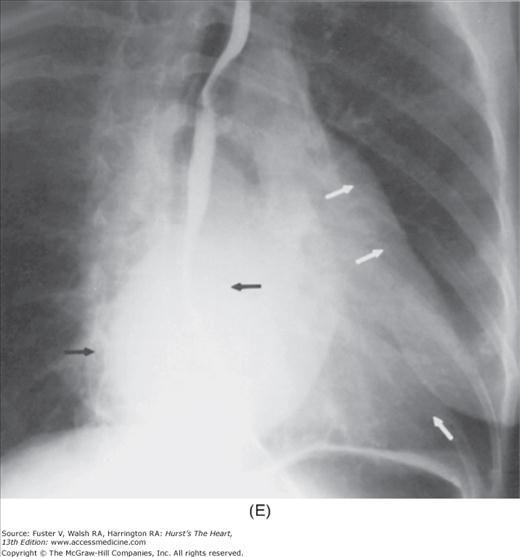 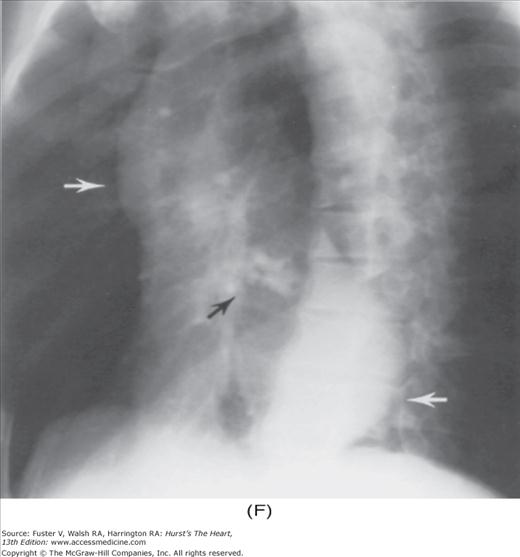 Practical application of four-view cardiac series. A. Posteroanterior (PA) view in a patient with coarctation of the aorta showing areas of rib notching bilaterally and left ventricular (LV) enlargement in the inferior and leftward direction. B. Magnified view of the left upper thorax of the same patient showing multiple areas of rib notching (arrows). C. PA view of another patient with aortic coarctation showing the 3 sign of the deformed descending aorta and E sign on the barium-filled esophagus. The upper arrow points to the level of coarctation, and the lower arrow marks the apex of the enlarged LV. The arrow on the patient’s right indicates the dilated ascending aorta. D. Lateral view of a third patient with the same disease showing a barium-filled esophagus to be pushed forward (upper arrow) by the poststenotic dilatation of the descending aorta and pushed backward (middle arrow) by the enlarged left atrium (LA). The very large LV (lower arrow) simply casts a shadow behind the esophagus without displacing it. The oblique arrow points to the calcified stenotic bicuspid aortic valve. E. Right anterior oblique view of the same patient whose PA view is shown in Fig. 17–7D. Note the huge right atrium (RA) casting a triangular density (lower horizontal arrow) behind the esophagus without displacing it. The esophagus is deviated posteriorly by the enlarged LA (upper horizontal arrow). The upper oblique arrows indicate the direction of the enlarging pulmonary trunk and right ventricle (RV). The lower oblique arrow points to the normal LV with the undisturbed left costophrenic sulcus. F. Left anterior oblique view of a patient with valvular aortic stenosis. The dilated ascending aorta (upper white arrow) is immediately above the flat anterior border of a normal RV. The black arrow points to the calcified aortic valve. The lower white arrow marks the enlarged LV.

The approach to the chest radiograph should be thorough and objective so that no clue is overlooked and no bias is incorporated in the process of radiographic analysis.1-4 Rib notching (Fig. 17–1A,B) provides important clues to the diagnosis of coarctation of the aorta.3,5 To prevent erroneous clinical information from misleading the radiographic interpretation, films should initially be interpreted without any knowledge about the patient.

A secundum atrial septal defect (ASD) can be incorrectly diagnosed as mitral stenosis (MS) because of similar physical signs. The split-second sound can be misinterpreted as the opening snap (see Chap. 14). The diastolic rumble caused by the increased flow through a normal tricuspid valve can mimic the murmur of MS. The radiographic signs of the two entities, however, are quite different (Fig. 17–2B vs 17–3A). The final radiographic diagnosis, however, should be made only after correlating the radiographic findings with clinical information and other laboratory data.6 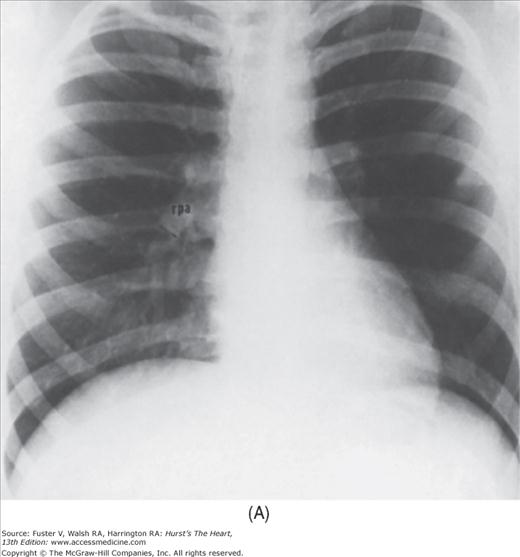 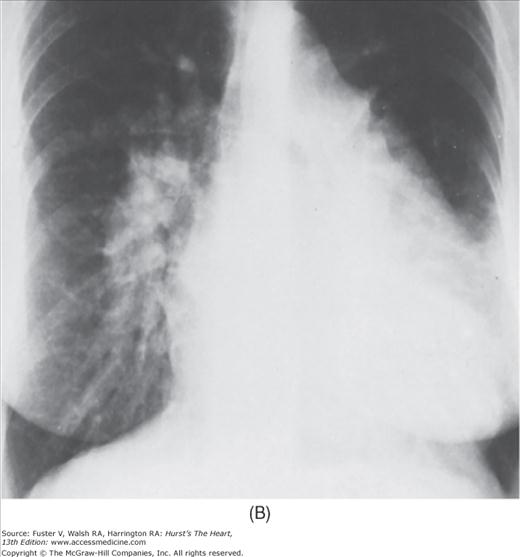 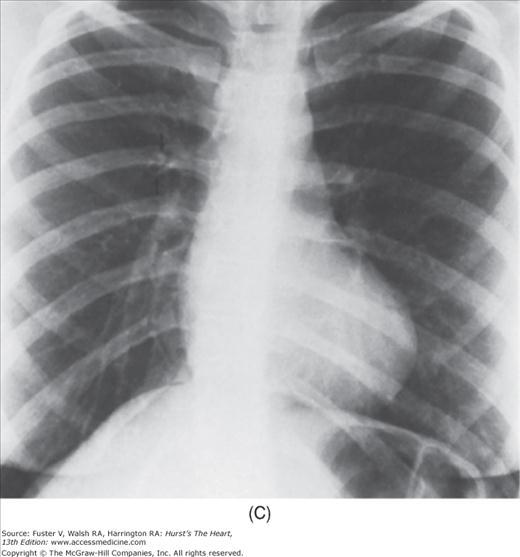 The first step is to survey the radiograph and assess all the structures, searching particularly for noncardiac conditions that can reflect heart disease. For instance, a right-sided stomach with an absent image of the inferior vena cava (IVC) suggests the possibility of congenital interruption of the IVC with azygos continuation7,8 (Fig. 17–4). A narrowed anteroposterior (AP) diameter of the thorax can be the cause of an innocent murmur9 (Fig. 17–5). 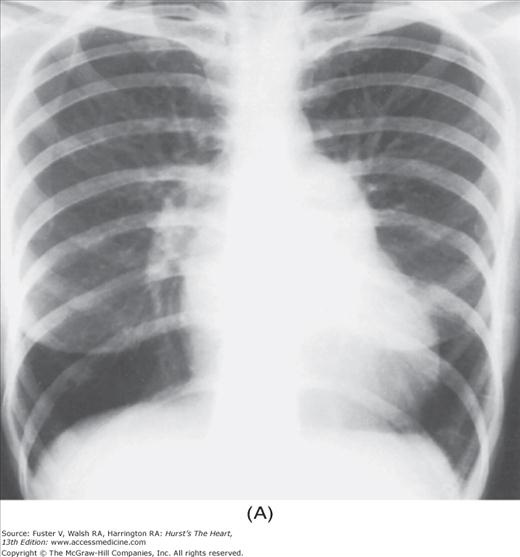 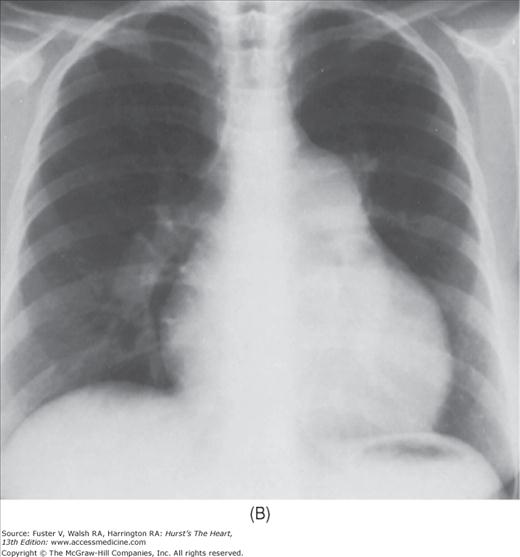 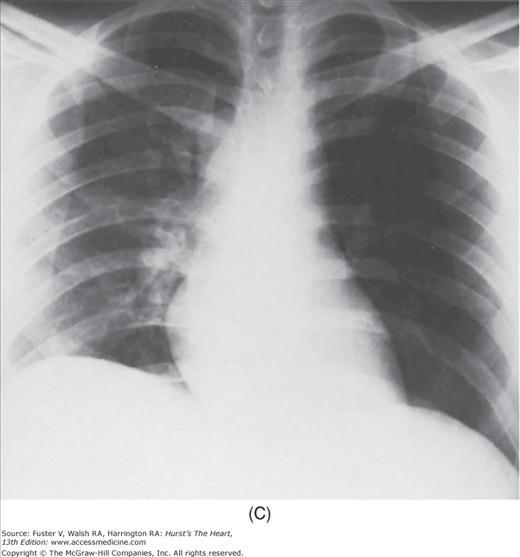 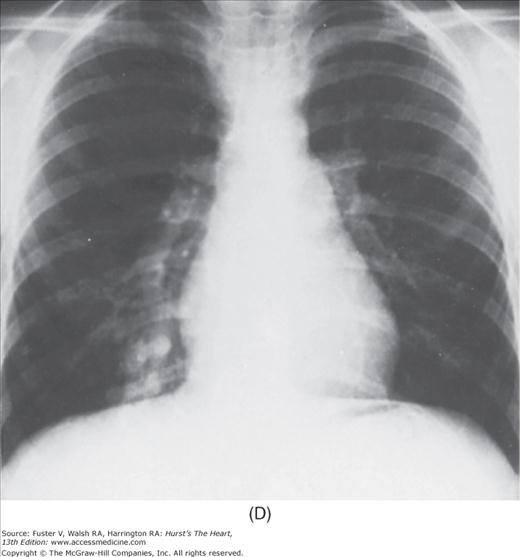 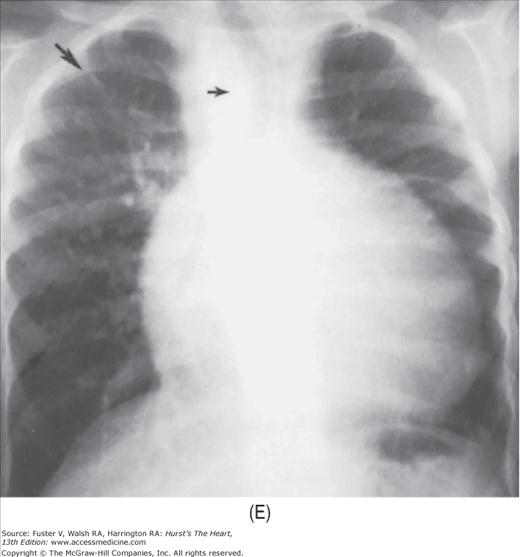 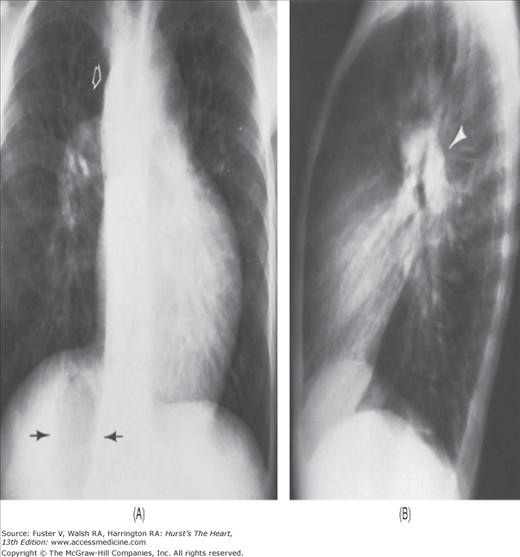 Patient with situs ambiguus, interruption of the inferior vena cava (IVC), ventricular septal defect, and polysplenia. A. Posteroanterior view shows that the aortic arch and the heart are left sided and the stomach (lower arrows) is right sided. The azygos vein (upper arrow) is markedly enlarged. The heart is mildly enlarged, and there is a moderate increase in pulmonary vascularity. B. The lateral view shows an absent image of the IVC. The azygos arch (arrow) is markedly dilated. 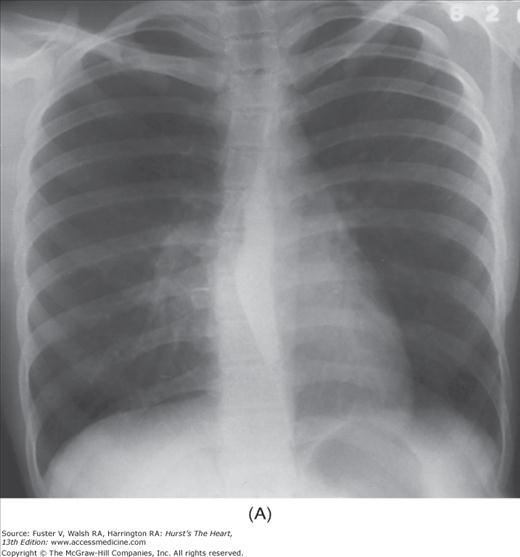 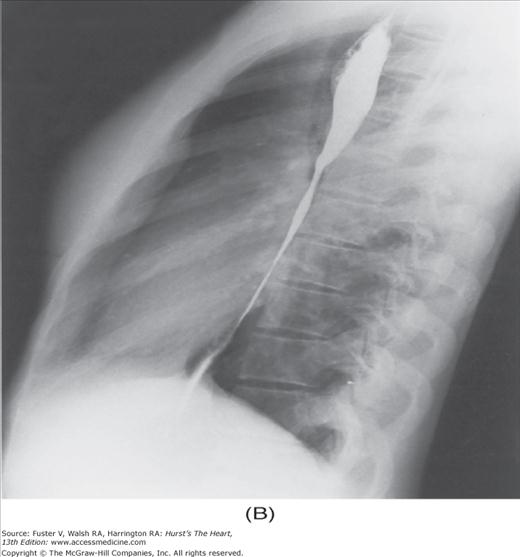 A 16-year-old girl with straight-back syndrome. A. The posteroanterior radiograph shows normal pulmonary vascularity and normal heart size. Note the leftward displacement and rotation of the heart, making its left border unusually prominent. B. The lateral view shows that the anteroposterior diameter of the chest is extremely narrow. The heart is squeezed, creating an innocent murmur.

The lung can often reflect the underlying pathophysiology of the heart. For example, if uniform dilatation of all pulmonary vessels is present, the diagnosis of a left-to-right shunt (see Fig. 17–2B) is more likely than a left-sided obstructive lesion. The latter typically shows a cephalic pulmonary blood flow (PBF) pattern (see Fig. 17–3A). 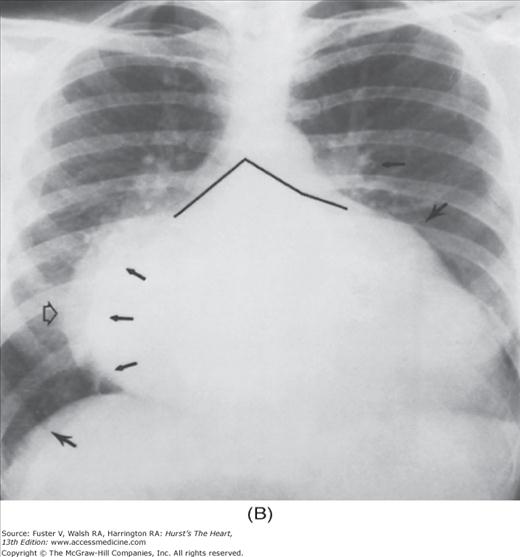 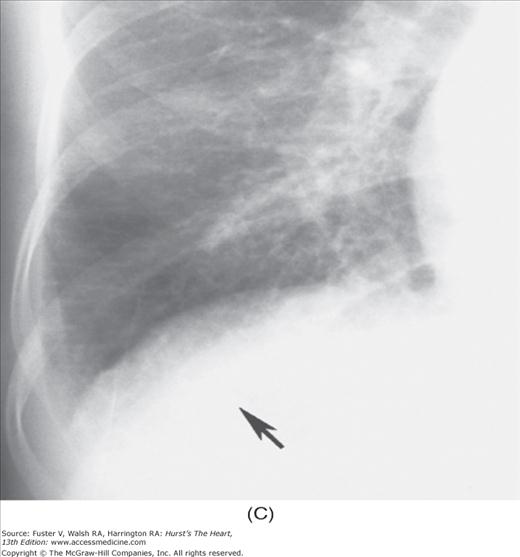 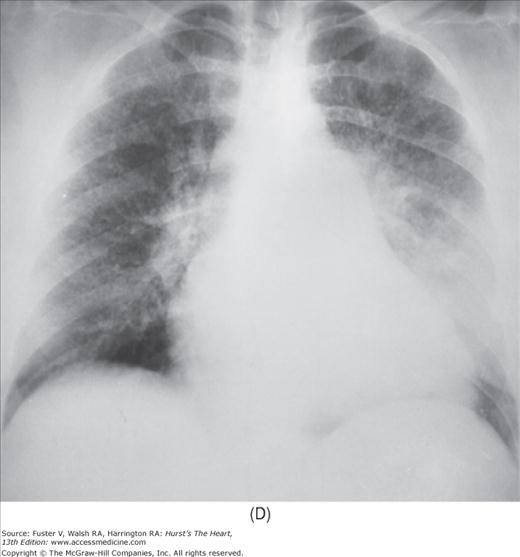 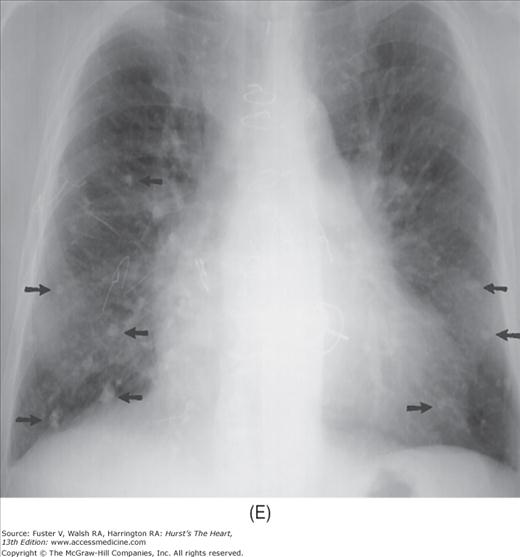 An enlarged heart is always abnormal; however, mild cardiomegaly may reflect a higher-than-average cardiac output from a normal heart, as seen in athletes with slow heart rates. The cardiothoracic ratio remains the simplest yardstick for assessment of cardiac size1; the mean ratio in the upright posteroanterior (PA) view is 44%.

The nature of cardiomegaly can often be determined by the specific radiographic appearance. As a rule, when the PBF pattern remains normal, volume overload tends to present a greater degree of cardiomegaly than lesions with pressure overload alone. For example, patients with aortic stenosis (AS) typically show features of left ventricular hypertrophy (LVH) without dilatation. Conversely, the left ventricle (LV) both dilates and hypertrophies in the case of aortic regurgitation (AR), producing a much larger heart even before the development of heart failure.

A smaller-than-average heart is encountered in patients with chronic obstructive pulmonary disease (COPD; Fig. 17–7A), Addison disease, anorexia nervosa, and starvation. An abnormally small heart, however, is difficult to define except retrospectively after successful therapy.

Any significant deviation from the normal cardiovascular contour can be a clue to the correct diagnosis. For instance, coeur en sabot, a “boot-shaped heart“ (see Fig. 17–2C), is characteristic of tetralogy of Fallot (ToF). A bulge along the left cardiac border with a retrosternal double density is virtually diagnostic of LV aneurysm (Fig. 17–8). A markedly widened right cardiac contour with a straightened left cardiac border is seen frequently in patients with severe MS leading to tricuspid regurgitation (TR) (see Fig. 17–7D).

Besides the familiar double density cast by an enlarged left atrium (LA), other increased densities can be found within the cardiac shadow, indicating a variety of dilated vascular structures (eg, tortuous descending aorta, aortic aneurysm, coronary artery aneurysm, pulmonary varix).2 Furthermore, large cardiac calcifications are readily seen in lateral and oblique views. If smaller calcific deposits are suspected, they should be verified promptly, ruled out by cardiac fluoroscopy or computed tomography (CT; see Chap. 22). Any radiologically detectable calcification in the heart is clinically important. In general, the heavier the calcification, the more significant it becomes (see Fig. 17–1F). The extent of valvular calcification tends to be proportionate to the severity of the valve stenosis regardless of the other radiographic signs of the disease.1,2,12,13 Calcification of the coronary artery is almost always atherosclerotic in nature. A fluoroscopically detectable coronary calcification correlates with major vessel occlusion in 94% of patients with chest pain14; however, the sensitivity of the test is only 40%.

Recently, electron-beam CT (EBCT) scanning has proven to be a sensitive method for detection and quantifying coronary calcifications (see Chaps. 22 and 64). Although a negative result can indicate no need for further testing in asymptomatic individuals, a positive result does not necessarily denote severe obstructive coronary artery disease (CAD). The sensitivity for detecting any coronary calcifications is greater than 95% with a specificity of less than 65% for significant coronary artery luminal stenosis. A calcified ascending aortic aneurysm with AR is highly suggestive of syphilitic aortitis15 (Fig. 17–9). 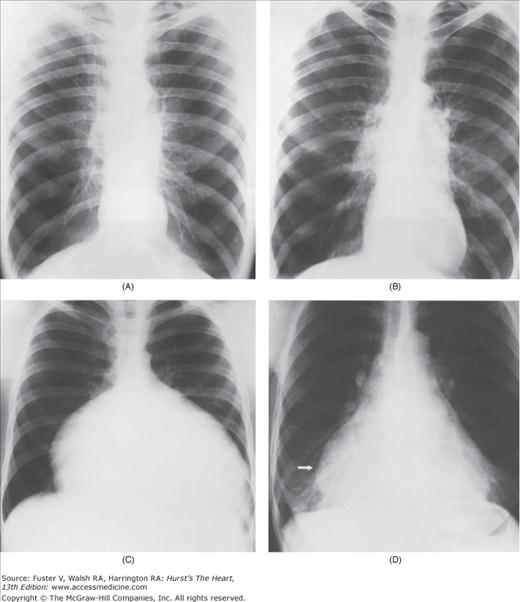 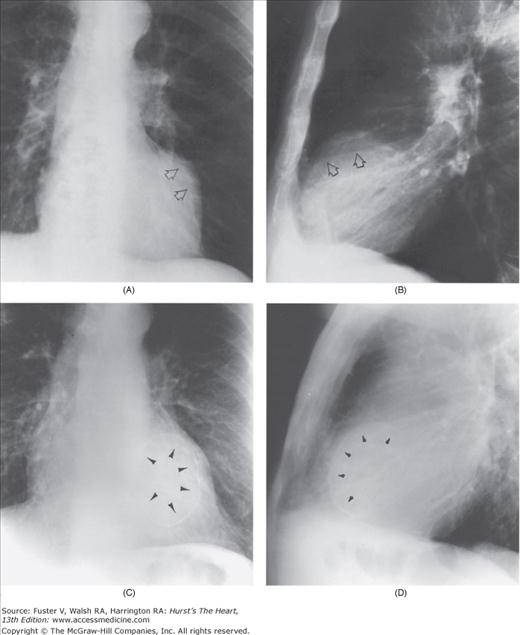 Left ventricular aneurysms. A. Posteroanterior (PA) view shows a localized bulge (arrows) along the left cardiac border representing a left ventricular (LV) aneurysm from the anterolateral wall. B. Lateral view shows a double density with sharp borders anteriorly and superiorly (arrows). This is the LV aneurysm that casts a shadow on the normal right ventricle (RV). Fluoroscopically, it is easy to confirm its origin and to separate it from the RV by rotating the patient under direct vision. C. PA view of a second patient, a 69-year-old man, shows total calcification of an anterolateral apical LV aneurysm (arrows). D. Lateral view shows the same (arrows). 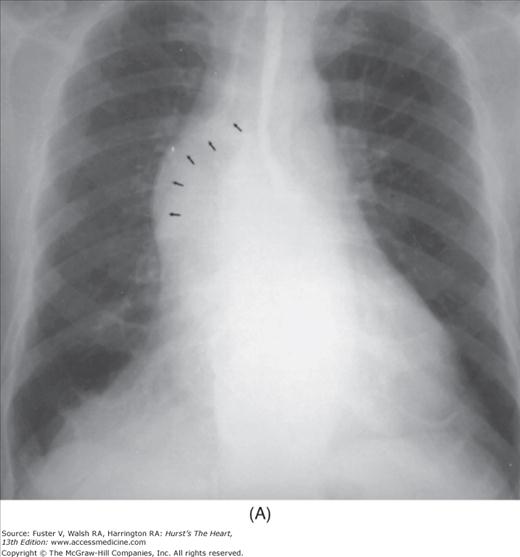 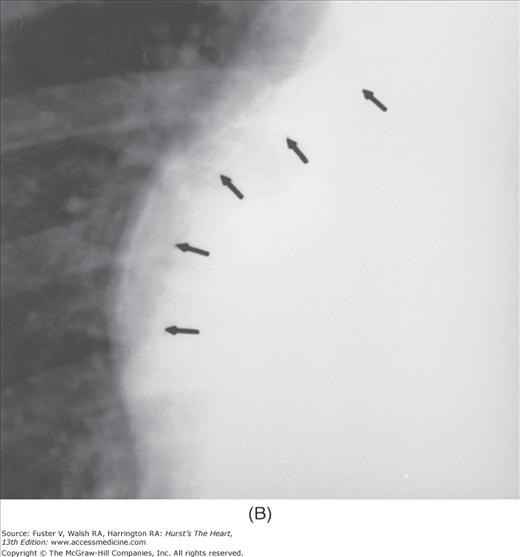 A 71-year-old woman with syphilitic aortitis. A. The posteroanterior radiograph shows a huge, calcified ascending aortic aneurysm (arrows). In addition, the entire aorta and the left ventricle are markedly dilated, compatible with severe aortic regurgitation . B. A magnified view of the ascending aorta shows the calcified aneurysm to better advantage. From Chen15 with permission. 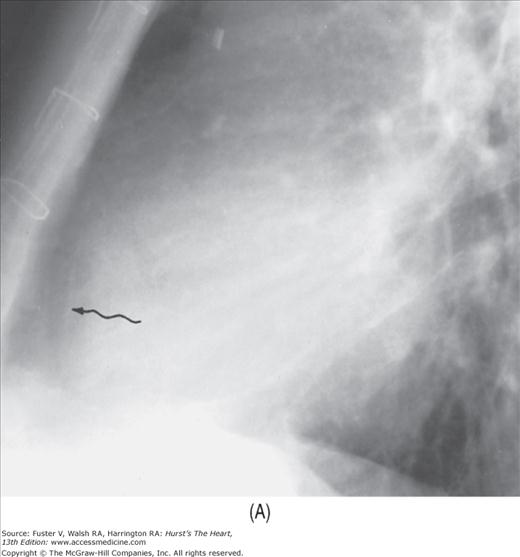 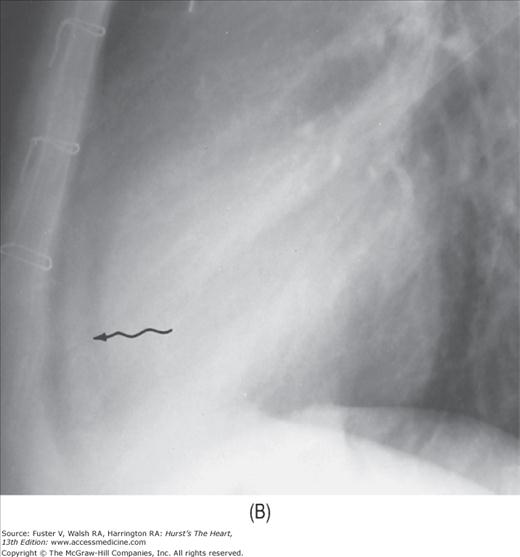 Cardiac malpositions are diagnosed only when either the heart or the stomach is out of the normal left-sided position. This definition is crucial in distinguishing an isolated right-sided aortic arch from a cardiac malposition.7,8

Recently, the term dextrocardia has been used to indicate any congenital right-sided heart regardless of the position of abdominal viscera. Dextrocardia with situs inversus indicates the mirror image of normal. In this situation, the incidence of congenital heart disease is only 5%, a nine-fold increase over the general population. The combination of dextrocardia, sinusitis, and bronchiectasis is known as the Kartagener triad.