The communicating vessel principle. (a) Noncommunicating hydrostatic columns presenting different heights, which lead to different energy states (column d presents the highest energy value). (b) Communicating columns in which flow moves from the higher to the lower energy state systems, until a common energy balance is reached

If there is no communication between vessels (Fig. 2.1a), the columns present different energy states, which vary just according to the same column height. In fact, in this static situation, the only energy level determinant is the potential gravitational energy value, which is expressed by the following formula:

(ρ represents the fluid density, g the gravity constant, h the height above the surface)
Whenever the different systems are in communication (Fig. 2.1b), fluid flows from the higher to the lower column, thus settling into a balanced common energy state, in which all the column heights are equal [5].
The venous system works both in stasis and in dynamics, so it is the Bernoulli’s law which better describes the involved determinants. In ideal conditions, it states that the energy factors governing the venous hemodynamic are the kinetic energy (ρv 2/2; ρ represents the fluid density, v the fluid velocity) together with the potential energy. The potential energy is constituted by the lateral pressure (p), linked to the vessel wall elastic properties, and gravitational pressure, produced by the blood column weight.
The sum of them (ρv 2 /2 + p + ρgh) is constant at any point: 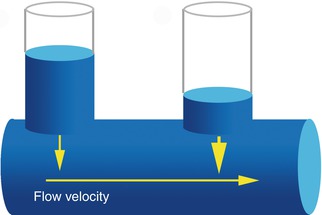 The implication is that, whenever the vessel divides into several branches, if the sum of the areas of the branches is smaller than the original vessel, an increased flow velocity will be expected. The opposite will be realized if the total area of the branches increases.

Transmural pressure (TMP) is a key factor in understanding venous hemodynamics. It is the difference between the internal venous pressure (IVP), acting on the internal vessel side to expand it, and the external venous pressure (EVP), acting on the external parietal wall to collapse it (Fig. 2.4). TMP and vessel permeability represent the determinants of intravascular-extravascular exchanges (Starling’s law).

Transmural pressure. AP atmospheric pressure, TP tissue pressure, EVP external venous pressure, IVP internal venous pressure, LP lateral pressure, HP hydrostatic pressure, OP oncotic pressure. TMP is the crucial parameter in tissue drainage and venous caliber regulation
Together with an energy gradient, another necessary element in producing a flow is the vessel capacity to receive a certain amount of fluid. As a collapsed, elliptical vein begins to fill, it can receive a large volume of fluid with little increase in pressure, a property conferring the blood reservoir function to the venous system. Much more pressure is required to stretch the vessel with additional fluid volume once it has become circular.
The physical property of a vessel to increase its volume with increasing TMP is known as compliance (C) and is expressed by the change in volume (ΔV) divided by the change in pressure (ΔP):

Compliance is strictly linked not only to the filling degree but also to the geometric vessel properties (length and radius), together with its wall elasticity.
A pressure-diameter curve (Fig. 2.5) highlights the nonlinear relationship in the initial filling phase, which is due to the great increase in vessel caliber following tiny pressure augmentations. On the contrary, in a distension phase, starting from pressure values around 20 mmHg, a volume/pressure linearity has been demonstrated. 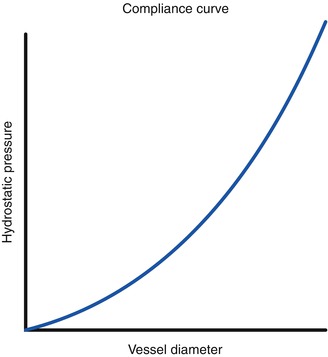 Compliance curve. The pressure-diameter curve highlights an exponential pressure increase over a little volume amount in an initial filling phase. After the achievement of a certain distension phase, the volume–pressure ratio (compliance) shows a linear relationship: in the saphenous system, this happens around the pressure value of 20 mmHg
Up to this point, all of our physics law applications have been made considering the vessel and the blood as an ideal conduit and liquid, respectively. The human body, however, produces friction through blood contact. An extension of the thermodynamics second principle, the entropy law, states that in case of nonideal conduits or liquids, part of the energy is dissipated as heat generation, thus increasing the amount of unavailable energy (entropy). The human body solution to counteract this energy dissipation has been the creation of the several pump mechanisms placed in series all along the cardiovascular system.

The venous drainage occurs from the superficial to the deep tissues and from the distal areas to the heart. The only two exceptions are represented by the foot sole venous system, where the blood is directed toward the dorsal network through marginal veins and the saphenofemoral junction tributaries, some of which drain reversely from the abdomen toward the groin.
Three anatomical compartments are identifiable in the venous system:

One of the most important vein features is their being endowed with bicuspid unidirectional valves. These are thin but extremely strong structures lying at the base of a vein segment which is expanded into a sinus. This anatomical peculiarity allows the valve to open without completely touching the parietal wall, thus resulting in a fast closure with blood flow reversal [6].
Valve density is significant in determining drainage pathways. The density of AC2 valves is lower at the leg than at the thigh (Fig. 2.6), and it always remains lower than that belonging to the AC1. This anatomical arrangement puts into practice the communicating vessel principle (Fig. 2.1), thus representing the first determinant in the hierarchical emptying order from the superficial to the deep venous system [7]. 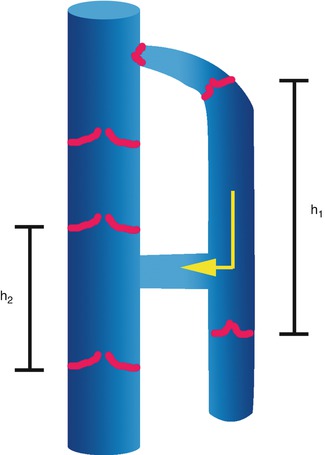 Valve density in the deep and saphenous compartments. The valvular density of the saphenous compartment is lower than that of the deep venous system. This anatomical organization creates higher hydrostatic columns in the saphenous system. Following the communicating vessel principle, blood will flow from the superficial to the deep compartments, through the perforating veins
The different anatomical compartment locations confer the second determinant of the physiological lower limb drainage. In fact, the muscle pump, which is mainly developed in the calf, assumes the main antagonist role against the force of gravity. The soleal and gastrocnemial contractions exert an EVP between 40 and 200 mmHg, thus reducing the TMP and displacing the blood toward the heart. The generated pressure wave will be transmitted to the surrounding veins proportionally to their own proximity to the muscular fascia investments.
In AC1, all the veins are in direct contact with the muscle mass and are surrounded by the rigid counterforce provided by the deep fasciae. At this level, the calf muscle pump is able to exert its maximum activity in opposing the force of gravity. The saphenous system, being above the muscular compartment and banded between the superficial and the deep fasciae, receives from the calf systole a higher energetic amount than that of its tributaries but also a significantly smaller one than that received by AC1. The decreasing muscular pump effect from AC1 to AC3 is shown by the decrease of concomitant flow velocities: 20–40 cm/s in AC1, 10–20 cm/s in AC2, and 0.05 cm/s in capillary plexuses (Fig. 2.7). The above-described deceleration creates a Venturi’s effect. This in turn governs the so-called physiological venous hierarchical order of emptying from the superficial to the deep compartments (from AC3 to AC2 to AC1) of the leg (Fig. 2.8).

The hierarchy of venous compartment emptying. The physiological venous emptying from the superficial to the deep tissues is made possible by the blood aspiration exerted by the Venturi’s effect application
Two others “pumps” have to be considered among venous flow determinants: the cardiac and thoracoabdominal. The heart is the main blood propeller providing volume, pressure, and flow to the system in the supine position when the hydrostatic pressure is null (in the standing position, the cardiac-created energy gradient needs to be integrated with the muscular pump because of the hydrostatic pressure increase).
Moreover, the right heart greatly influences venous hemodynamics, increasing the central venous pressure during its systole and the venous flow during its diastole. The close link between heart pump and venous circulation is shown by the evident cardiac pulsations in lower limb venous tracings and by the venous edema seen in congestive heart failure patients.
The thoracoabdominal pump influences the venous return by means of the diaphragm movements, which in the end determines the intra-abdominal pressure. During inspiration, intra-abdominal pressure increases, thus compressing the inferior vena cava and reducing the venous blood flow; usually the venous outflow from the lower limbs can temporarily cease. During expiration, the intra-abdominal pressure falls again, the inferior vena cava expands, and the venous blood from the lower limbs can flow to the heart. In conclusion, in order to establish a flow, two factors are needed: an energy gradient (potential plus kinetic) and a system with a compliance capable of receiving a certain fluid amount [4].

A retrograde segmental superficial and/or deep venous flow lasting less than 0.5 s (except in the femoropopliteal system, where 1.0 s is allowed) is considered physiological in the muscular diastolic phase. The communicating vessel principle predicts blood displacement from the higher hydrostatic columns to the lower ones, until an energy balance is reached.
The distance between two competent valvular planes is not long, even if greater in AC2 than in AC1. Thus, a physiological retrograde flow exhibits slow velocities, which render this blood movement undetectable by Doppler (Fig. 2.9a). On the other hand, in the case of valvular incontinence or absence, the height of the hydrostatic columns becomes progressively higher (Fig. 2.9b): if the system presents a compliance capable of receiving a blood overload, a diastolic flow at high velocity will be produced and revealed by Doppler.