During diastole, with low LVEDP, myocardial oxygen consumption and energy substrate utilization are minimized. The rapid attainment of diastolic cardiac arrest at the onset of the ischemic period is important and protection is further enhanced if the myocardium is simultaneously cooled as hypothermia reduces basal metabolic rate and reduces myocardial electrical activity.

Myocardial cooling can be achieved by administering cold cardioplegia, packing the heart with ice, cold pericardial lavage, or with temperature-controlled CPB. Care should be taken as prolonged localized hypothermia may actually cause myocardial damage. In contemporary practice antegrade cold blood cardioplegia to rapidly stop electromechanical activity and simultaneously reduce temperature in all myocardial layers has become the preferred method of cooling the heart.

Cardioplegia literally means “heart paralysis.” The heart can be arrested in either systole or diastole, but as discussed above, its lowest energy-requiring state is in diastole, so this is universally the preferred state of deliberate arrest. All cells have an electrical gradient or potential difference across their membranes and cardioplegic solutions act by altering the electrical gradient across the cell membrane of myocytes, with the goal of suppressing electrical activity and consequently mechanical contraction. The membrane equilibrium potential of the cardiac myocyte at rest is stable and relatively negative, at approximately minus 90 mV. At this equilibrium the inward depolarizing and outward repolarizing currents are equal in magnitude and there is no net current. This potential is determined by the selective permeability of the cell membrane to ions.

The myocyte cell membrane is ordinarily most permeable to K+ and relatively impermeable to other ions. Movement of other ions across the membrane is mainly determined by voltage gated channels, which open or close at specific membrane potentials. The resting membrane potential is therefore dominated by the K+ equilibrium potential according to the K+ gradient across the cell membrane. The equilibrium potential for any ion may be calculated using the Nernst equation, which in a simplified version states that (e.g. for K+): 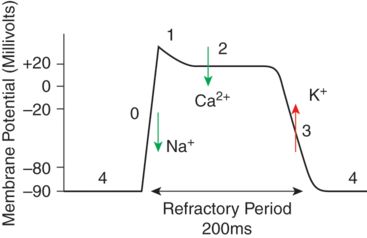 
Myocardial membrane potential at the 4 phases of the cardiac cycle.

When extracellular cardioplegia with high K+ (20 mmol/l) displaces blood surrounding the myocytes, the cell membrane potential is increased and it depolarizes more readily, i.e. at a less negative membrane potential. The depolarization causes voltage gated Ca2+ to open, transient calcium influx via these channels results in contraction, before they close and the calcium is locked away in the sarcoplasmic reticulum again, and the cell relaxes (diastole). However, the high extracellular potassium concentration of the cardioplegia now prevents repolarization from occurring, so that the cell stays depolarized. When the resting potential approaches −50 mV, Na+ channels are inactivated resulting in a diastolic arrest of cardiac activity.

Cardioplegia may be classified as either crystalloid-based or blood-based solutions. The crystalloid solutions may be further sub-classified based on their composition and similarity to either the normal intracellular or extracellular environment (see Table 7.1).

Initially, in the 1950s, potassium-based cardioplegia solutions were introduced with K+ concentrations of 200 mM, and while the technique was effective in inducing cardiac arrest, it was associated with myocyte damage and necrosis caused by intracellular calcium overload as a result of membrane depolarization-induced calcium channel activation. It was not until the 1970s that the clinically safe K+ concentration for cardioplegia solutions was determined to be closer to 20 mM, and since then potassium-based cardioplegia has been the standard solution used in cardiac surgery to arrest the heart. The development of St. Thomas’ Hospital cardioplegic solution, essentially by adding potassium (16 mM) and magnesium (16 mM) to Ringer’s solution in the 1970s by Hearse and colleagues was a significant development in cardiac surgery and led to reduced operative mortality and better recovery of cardiac function postoperatively. As the mechanism of myocyte depolarization and contraction outlined above shows, potassium is not the only ion which could be used to manipulate myocyte electrical membrane potential and so affect myocardial contractility. In addition to hyperkalemia, hyponatremia, hypocalcemia, and hypermagnesemia will all ultimately cause diastolic cardiac arrest. Hypercalcemia, if profound enough, may cause systolic cardiac arrest. Bretschneider, working in Germany, developed a calcium-free, low sodium cardioplegia solution, which works by reducing the transmembrane Na+ gradient sufficiently so that not enough Na+ can enter the myocyte during phase 0 to cause depolarization, and the myocyte membrane remains hyperpolarized, and arrested in diastole. This solution is known as histidine-tryptophan-ketoglutarate (HTK), Bretschneider’s or Custodiol solution, and its components are listed in Table 7.1. It is classified as an intracellular cardioplegia solution as its composition is closer to that of the intracellular environment, in contrast to the K+ based “extracellular environment-like” solutions. A specific advantage of this solution over the solutions that resemble the extracellular environment is that it may be administered as a single bolus which provides effective protection for a period of over 2 hours. This means that the surgeon can concentrate wholly on the surgical procedure without being interrupted in order to repeatedly administer cardioplegia solution. Disadvantages are that a larger volume is given initially, which can cause hemodilution, and that the low sodium content may also result in systemic hyponatremia, although as serum osmolarity is maintained this may not be clinically significant.

Blood cardioplegia is now considered by many to be the optimum cardioplegic solution, especially for higher risk patients. One practical drawback, however, is that repeated doses are required, usually at 20 to 30 minute intervals, and this can disrupt the smooth progress of the operation.

The main efficacy of all cardioplegia solutions in current use stems from their electrolyte composition and ability to induce rapid diastolic arrest. Many substances have been added to these solutions with a view to fine-tuning the myocardial protectant effect. Procaine has been shown to be effective in stabilizing the cardiac rhythm after cross-clamp removal and reperfusion, decreasing the incidence of ventricular fibrillation. Mannitol is a component of many cardioplegia solutions, and is added to increase the osmolarity of the final solution, with the aim of minimizing fluid transfer and intracellular edema. Albumin and glucose have also been added to some solutions to increase osmolarity. All cardioplegic solutions contain buffering agents, commonly sodium bicarbonate in the case of extracellular and blood-based solutions, and histidine in the case of HTK intracellular solution. Tris-hydroxymethyl aminomethane (THAM) is a buffer agent that, unlike sodium bicarbonate, does not produce carbon dioxide (CO2) but rather works by reacting with CO2, and removing it. A reduction in myocardial pH consequent to ischemia impairs enzyme kinetics and myocardial metabolism. A limited degree of acidosis may be protective following ischemia as it has been suggested that calcium accumulation is inhibited by attenuation of the sodium–hydrogen exchange system in acidosis. Calcium accumulation within myocytes occurs during ischemia, and is detrimental. Magnesium is a very effective physiological anatagonist to calcium, and is added to cardioplegia solutions to block calcium entry into myocytes. Citrate, in the form of citrate-phosphate-dextrose (CPD) is also added to some preparations, to prevent calcium accumulation.

In order to induce and maintain diastolic cardiac arrest, cardioplegia solutions must act directly on the myocyte membrane. Practically this means that the solution must reach and surround each individual myocyte, in order to protect it. Thankfully the heart has a vascular network in place which is designed to continually perfuse each myocyte, and in most individuals this can be utilized effectively to deliver the cardioplegia solution. Cardioplegia solutions may be delivered antegrade (i.e. via the coronary arteries), retrograde (i.e. via the coronary sinus, through the venous system of the heart.), or by a combination of both, as demonstrated in Figure 7.3. 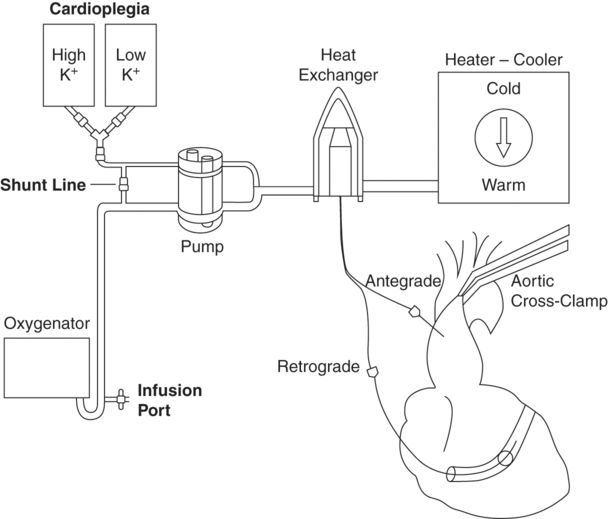 
Cannulation and set-up for antegrade and retrograde application of cardioplegia.