Sample range is the difference between the highest and the lowest measurements. Therefore, it is a very sensitive measure of variability because it is influenced by the extreme observations. For situations in which there are extreme observations, some researchers use the interquartile range (IQR) which represents the difference between the 25th percentile and 75th percentile. Sample variance (s 2) is another important measure of variability, which is calculated by the following formula (Eq. 25.1), where x i are the individual measurements,

(25.1)
Since the unit of variance is squared of the original unit of measure, the sample standard deviation (s) is often used as another measure of spread, which is simply the square root of the sample variance (Eq. 25.2):

(25.2)
It is important to distinguish the difference between population and sample measures of spread. For example, population standard deviation (σ) is a measure of spread over the entire population of size N with a mean of μ (Eq. 25.3); similarly, population variance is denoted by σ 2. The reason for using “n − 1” in calculating sample variance (s 2) and standard deviation (s) is to ensure that the estimates for variability remain unbiased. This concept is discussed in standard statistical textbooks, and we refer the reader to Fundamentals of Biostatistics by Bernard Rosner for additional information. 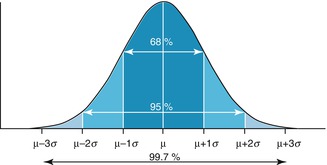 As stated earlier, one of the objectives of statistics is to infer the properties of the underlying population from a sample (i.e., subset of the population). Statistical inference can be subdivided into two main areas: estimation and hypothesis testing. Estimation is concerned with estimating the values of specific population parameters. It is therefore, very important to understand the relationships between the sample characteristics and population parameters [5–10].

25.2.6 Point and Interval Estimators for the Population Mean

A natural estimator for μ is the sample mean

, which is referred to as a point estimate. Suppose we want to determine the appropriate sample size for estimating the mean of a population (μ) which is unknown. We can start by taking a random sample to determine the sample mean and sample variance. However, the sample mean values can change from sample to sample. Therefore, it is necessary for us to determine the variation in the point estimate (e.g., sample mean). Assuming that the sample size is large (n > 30), we can determine an interval estimate (e.g., 95 % confidence interval) for the population parameters. For example, if the population parameter is μ, a 95 % confidence interval can be calculated by the following formula (Eq. 25.4). The value 1.96 is the exact value determined from the normal distribution, which is based on the fact that 95 % of the measurements are within 1.96 (approximately 2) standard deviations of the mean.

25.2.8 Point and Interval Estimators for the Population Proportion

is defined as the proportion of the observed characteristic of interest in the sample (Eq. 25.6):

(25.6)
For large samples with a 95 % confidence interval, the population proportion p is calculated as follows:

(25.7)
The quantity to the right of the sample proportion in Eq. 25.7 is known as the margin of error or the bound on the error of estimation (B). As shown before in the case of point estimates for the population mean, this relationship can be used to estimate the appropriate sample size, which will be explained later.

Generally, bias is defined as “a partiality that prevents objective consideration of an issue.” In statistics, bias means “a tendency of an estimate to deviate in one direction from a true value.” In terms of the population means and proportion estimates described in the previous sections, bias can be defined as:

(25.8)
From a statistical perspective, an estimator is considered unbiased if the average bias based on repeated sampling is zero. For example,

is an unbiased estimator of μ and

is an unbiased estimator for p. However, there are multiple sources of bias inherent in any study that may occur during the course of the study, from allocation of participants and delivery of interventions to measurement of outcomes. Bias can also occur before the study begins or after the study during analysis. Late-look bias occurs with re-examination and re-interpretation of the collected data after the study has been unblinded. Lead-time bias occurs when earlier examination of patients with a particular disease leads to earlier diagnosis, giving the false impression that the patient will live longer. Measurement bias occurs when an investigator familiar with the study does the measurement and makes a series of errors towards the conclusion they expect. Recall bias occurs when patients informed about their disease are more likely to recall risk factors than uninformed patients. Sampling bias occurs when the sample used in the study is not representative of the population and so conclusions may not be generalizable to the whole population. Finally, selection bias occurs when the lack of randomization leads to patients choosing their experimental group which could introduce confounding [11–14].

25.3.2 Other Elements of Testing Hypothesis

The power of a test is the probability of rejecting the null hypothesis when it is false. Mathematically, power is defined as 1 − β. The power of a test is directly related to its sample size; increasing sample size results in a higher power. However, the power is also directly dependent upon the variance of the measurement. In fact, it is inversely related to the variance of the measurement. If the variance is higher then the power will be lower. Using more sensitive and specific instruments that can measure a finer gradient (such as reliably estimating high-density lipoproteins to three decimal places) can also improve the power of a study. An insufficiently powered study can lead to false acceptance of the null hypothesis and thereby lead to a higher likelihood of type II error. In other words, a study may incorrectly conclude that there is no difference between two groups (e.g., two treatments) when one really existed. To avoid these errors, the power of a study must be determined by an estimate of the expected differences between two groups.

The sample size (n) is the total number of patients enrolled in a particular study. This number plays a critical role in the statistical power and relevance of the findings from the study. The sample size can be determined through two inferential techniques. First, for determining the minimum sample size required to estimate a certain parameter of interest within a certain margin of error, we need the variance of the measurement, level of confidence, and the margin of error. Referring back to the definition of margin of error, we can calculate the sample size for estimating the difference between two means (μ 1 − μ 2) based on two independent samples of equal size with the following formula: