Basic Biology of the Cardiovascular System

BASIC BIOLOGY OF THE CARDIOVASCULAR SYSTEM

Blood vessels participate in homeostasis on a moment-to-moment basis and contribute to the pathophysiology of diseases of virtually every organ system. Hence, an understanding of the fundamentals of vascular biology furnishes a foundation for understanding the normal function of all organ systems and many diseases. The smallest blood vessels—capillaries—consist of a monolayer of endothelial cells apposed to a basement membrane, adjacent to occasional smooth-muscle-like cells known as pericytes (Fig. 1-1A). Unlike larger vessels, pericytes do not invest the entire microvessel to form a continuous sheath. Veins and arteries typically have a trilaminar structure (Fig. 1-1 B–E). The intima consists of a monolayer of endothelial cells continuous with those of the capillaries. The middle layer, or tunica media, consists of layers of smooth-muscle cells; in veins, the media can contain just a few layers of smooth-muscle cells (Fig. 1-1 B). The outer layer, the adventitia, consists of looser extracellular matrix with occasional fibroblasts, mast cells, and nerve terminals. Larger arteries have their own vasculature, the vasa vasorum, which nourishes the outer aspects of the tunica media. The adventitia of many veins surpasses the intima in thickness. 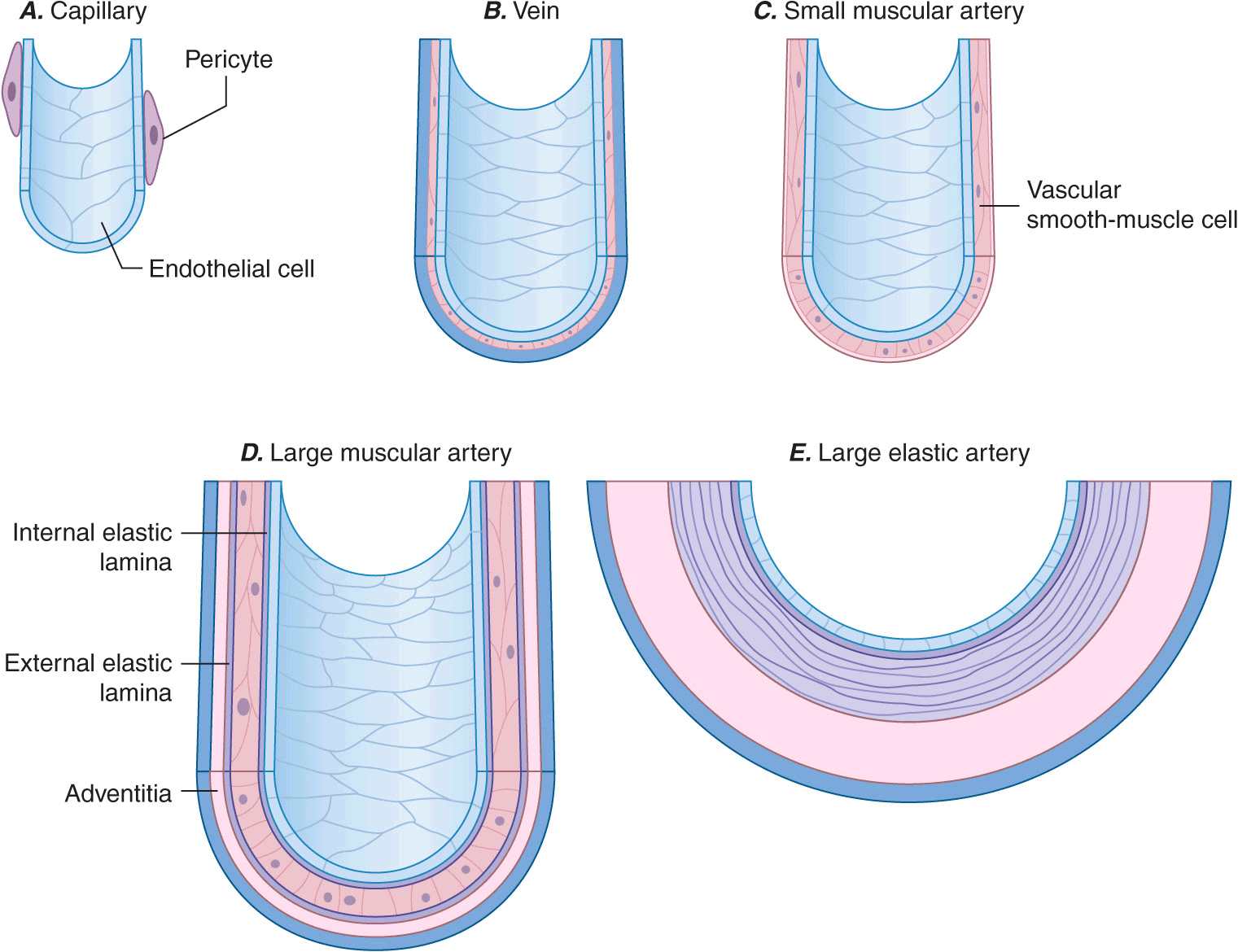 FIGURE 1-1
Schematics of the structures of various types of blood vessels. A. Capillaries consist of an endothelial tube in contact with a discontinuous population of pericytes. B. Veins typically have thin medias and thicker adventitias. C. A small muscular artery features a prominent tunica media. D. Larger muscular arteries have a prominent media with smooth-muscle cells embedded in a complex extracellular matrix. E. Larger elastic arteries have cylindrical layers of elastic tissue alternating with concentric rings of smooth-muscle cells.

The tone of muscular arterioles regulates blood pressure and flow through various arterial beds. These smaller arteries have a relatively thick tunica media in relation to the adventitia (Fig. 1-1 C). Medium-size muscular arteries similarly contain a prominent tunica media (Fig. 1-1 D); atherosclerosis commonly affects this type of muscular artery. The larger elastic arteries have a much more structured tunica media consisting of concentric bands of smooth-muscle cells, interspersed with strata of elastin-rich extracellular matrix sandwiched between layers of smooth-muscle cells (Fig. 1-1 E). Larger arteries have a clearly demarcated internal elastic lamina that forms the barrier between the intima and the media. An external elastic lamina demarcates the media of arteries from the surrounding adventitia.

The key cell of the vascular intima, the endothelial cell, has manifold functions in health and disease. Most obviously, the endothelium forms the interface between tissues and the blood compartment. It therefore must regulate the entry of molecules and cells into tissues in a selective manner. The ability of endothelial cells to serve as a selectively permeable barrier fails in many vascular disorders, including atherosclerosis and hypertension. This dysregulation of permeability also occurs in pulmonary edema and other situations of “capillary leak.”

The endothelium also participates in the local regulation of blood flow and vascular caliber. Endogenous substances produced by endothelial cells such as prostacyclin, endothelium-derived hyperpolarizing factor, nitric oxide (NO), and hydrogen peroxide (H2O2) provide tonic vasodilatory stimuli under physiologic conditions in vivo (Table 1-1). Impaired production or excess catabolism of NO impairs this endothelium-dependent vasodilator function and may contribute to excessive vasoconstriction in various pathologic situations. By contrast, endothelial cells also produce potent vasoconstrictor substances such as endothelin in a regulated fashion. Excessive production of reactive oxygen species, such as superoxide anion (O2–), by endothelial or smooth-muscle cells under pathologic conditions (e.g., excessive exposure to angiotensin II) can promote local oxidative stress and inactivate NO.

The endothelium also dynamically regulates thrombosis and hemostasis. Nitric oxide, in addition to its vasodila-tory properties, can limit platelet activation and aggregation. Like NO, prostacyclin produced by endothelial cells under normal conditions not only provides a vasodilatory stimulus but also antagonizes platelet activation and aggregation. Thrombomodulin expressed on the surface of endothelial cells binds thrombin at low concentrations and inhibits coagulation through activation of the protein C pathway, inactivating clotting factors Va and VIIIa and thus combating thrombus formation. The surface of endothelial cells contains heparan sulfate glycosaminoglycans that furnish an endogenous antithrombotic coating to the vasculature. Endothelial cells also participate actively in fibrinolysis and its regulation. They express receptors for plasminogen and plasminogen activators and produce tissue-type plasminogen activators. Through local generation of plasmin, the normal endothelial monolayer can promote the lysis of nascent thrombi.

When activated by inflammatory cytokines, bacterial endotoxin, or angiotensin II, for example, endothelial cells can produce substantial quantities of the major inhibitor of fibrinolysis, plasminogen activator inhibitor 1 (PAI-1). Thus, in pathologic circumstances, the endothelial cell may promote local thrombus accumulation rather than combat it. Inflammatory stimuli also induce the expression of the potent procoagulant tissue factor, a contributor to disseminated intravascular coagulation in sepsis.

Various invasive and noninvasive approaches can be used to evaluate endothelial vasodilator function in humans. Either pharmacologic agonists or increased flow stimulates the endothelium to release acutely molecular effectors that alter underlying smooth-muscle cell tone. Invasively, infusion of the cholinergic agonists acetylcholine and methacholine stimulates the release of NO from normal endothelial cells. Changes in coronary diameter can be quantitatively measured in response to an intracoronary infusion of these short-lived, rapidly acting agents. Noninvasive assessment of endothelial function in the forearm circulation typically involves occlusion of brachial artery blood flow with a blood pressure cuff, which elicits reactive hyperemia after release; the resulting flow increase normally causes endothelium-dependent vasodilation, which is measured as the change in brachial artery blood flow and diameter by ultrasound (Fig. 1-2). This approach depends on shear stress–dependent changes in endothelial release of NO after restoration of blood flow, as well as the effect of adenosine released (transiently) from ischemic tissue in the forearm.

FIGURE 1-2
Assessment of endothelial function in vivo using blood pressure cuff-occlusion and release. Upon deflation of the cuff, changes in diameter (A) and blood flow (B) of the brachial artery are monitored with an ultrasound probe (C). (Reproduced with permission of J. Vita, MD.)

Typically, these invasive and noninvasive approaches detect inducible vasodilatory changes in vessel diameter of ~10%. In individuals with atherosclerosis or its risk factors (especially hypertension, hypercholesterolemia, diabetes mellitus, and smoking), such studies can detect endothelial dysfunction as defined by a smaller change in diameter and, in the extreme case, a so-called paradoxical vasoconstrictor response owing to the direct effect of cholinergic agonists on vascular smooth-muscle cell tone.

The vascular smooth-muscle cell, the major cell type of the media layer of blood vessels, also contributes actively to vascular pathobiology. Contraction and relaxation of smooth-muscle cells at the level of the muscular arteries controls blood pressure, and, hence, regional blood flow and the afterload experienced by the left ventricle (see later). The vasomotor tone of veins, which is governed by smooth-muscle cell tone, regulates the capacitance of the venous tree and influences the preload experienced by both ventricles. Smooth-muscle cells in the adult vessel seldom replicate. This homeostatic quiescence of smooth-muscle cells changes in conditions of arterial injury or inflammatory activation. Proliferation and migration of arterial smooth-muscle cells, which is associated with a change in phenotype characterized by lower content of contractile proteins and greater production of extracellular matrix macromolecules, can contribute to the development of arterial stenoses in atherosclerosis, arteriolar remodeling that can sustain and propagate hypertension, and the hyperplastic response of arteries injured by angioplasty or stent deployment. In the pulmonary circulation, smooth-muscle migration and proliferation contribute decisively to the pulmonary vascular disease that gradually occurs in response to sustained high-flow states such as left-to-right shunts. Such pulmonary vascular disease provides a major obstacle to the management of many patients with adult congenital heart disease. Elucidation of the signaling pathways that regulate the reversible transition of the vascular smooth-muscle cell phenotype remains an active focus of investigation. Among other mediators, microRNAs have emerged as powerful regulators of this transition, offering new targets for intervention.

The activated, phenotypically modulated smooth-muscle cells secrete the bulk of vascular extracellular matrix. Excessive production of collagen and glycosaminoglycans contributes to the remodeling and altered biology and biomechanics of arteries affected by hypertension or atherosclerosis. In larger elastic arteries, the elastin synthesized by smooth-muscle cells serves to maintain not only normal arterial structure but also hemodynamic function. The ability of the larger arteries, such as the aorta, to store the kinetic energy of systole promotes tissue perfusion during diastole. Arterial stiffness associated with aging or disease, as manifested by a widening pulse pressure, increases left ventricular afterload and portends a poor outcome. 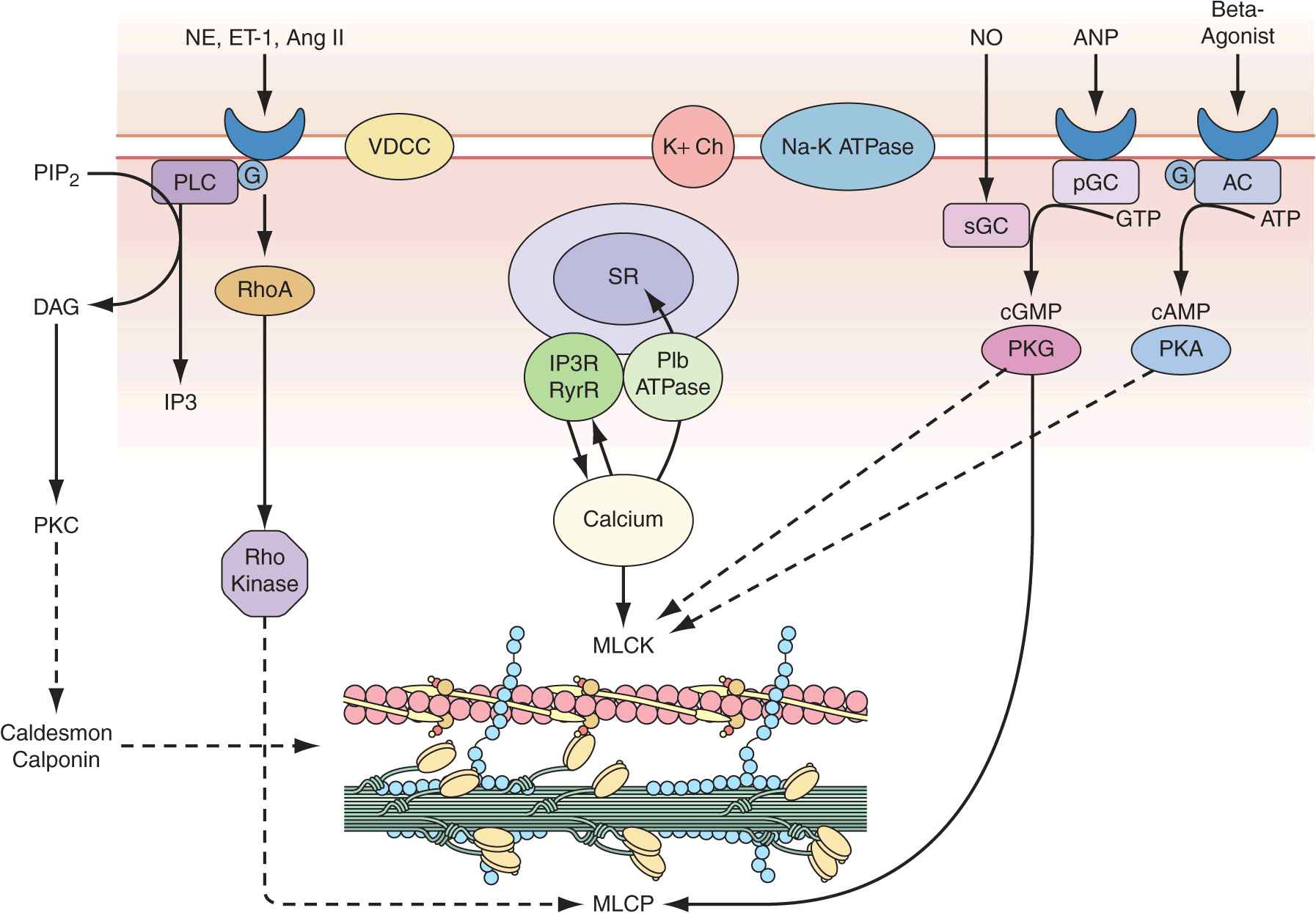 Biochemical agonists also increase intracellular calcium concentration, in this case by receptor-dependent activation of phospholipase C with hydrolysis of phosphatidylinositol 4,5-bisphosphate, resulting in generation of diacylglycerol (DAG) and inositol 1,4,5-trisphosphate (IP3). These membrane lipid derivatives in turn activate protein kinase C and increase intracellular calcium concentration. In addition, IP3 binds to specific receptors on the sarcoplasmic reticulum membrane to increase calcium efflux from this calcium storage pool into the cytoplasm.

The endothelium modulates vascular smooth-muscle tone by the direct release of several effectors, including NO, prostacyclin, hydrogen sulfide, and endothelium-derived hyperpolarizing factor, all of which cause vasorelaxation, and endothelin, which causes vasoconstriction. The release of these endothelial effectors of vascular smooth-muscle cell tone is stimulated by mechanical (shear stress, cyclic strain, etc.) and biochemical mediators (purinergic agonists, muscarinic agonists, peptidergic agonists), with the biochemical mediators acting through endothelial receptors specific to each class. In addition to these local paracrine modulators of vascular smooth-muscle cell tone, circulating mediators can affect tone, including norepinephrine and epinephrine, vasopressin, angiotensin II, bradykinin, and the natriuretic peptides (ANP, BNP, CNP, and DNP), as discussed earlier.

Growth of new blood vessels can occur in response to conditions such as chronic hypoxemia and tissue ischemia. Growth factors, including vascular endothelial growth factor (VEGF) and forms of fibroblast growth factor (FGF), activate a signaling cascade that stimulates endothelial proliferation and tube formation, defined as angiogenesis. The development of collateral vascular networks in the ischemic myocardium reflects this process and can result from selective activation of endothelial progenitor cells, which may reside in the blood vessel wall or home to the ischemic tissue subtended by an occluded or severely stenotic vessel from the bone marrow. True arteriogenesis, or the development of a new blood vessel that includes all three cell layers, normally does not occur in the cardiovascular system of adult mammals. The molecular mechanisms and progenitor cells that can recapitulate blood vessel development de novo are under rapidly advancing study.

The last decade has witnessed considerable progress in efforts to define the genetic differences underlying individual variations in vascular pharmacologic responses. Many investigators have focused on receptors and enzymes associated with neurohumoral modulation of vascular function as well as hepatic enzymes that metabolize drugs that affect vascular tone. The genetic polymorphisms thus far associated with differences in vascular response often (but not invariably) relate to functional differences in the activity or expression of the receptor or enzyme of interest. Some of these polymorphisms appear to have different allele frequencies in specific ethnic groups. A summary of recently identified polymorphisms defining these vascular pharmacogenomic differences is provided in Table 1-2. 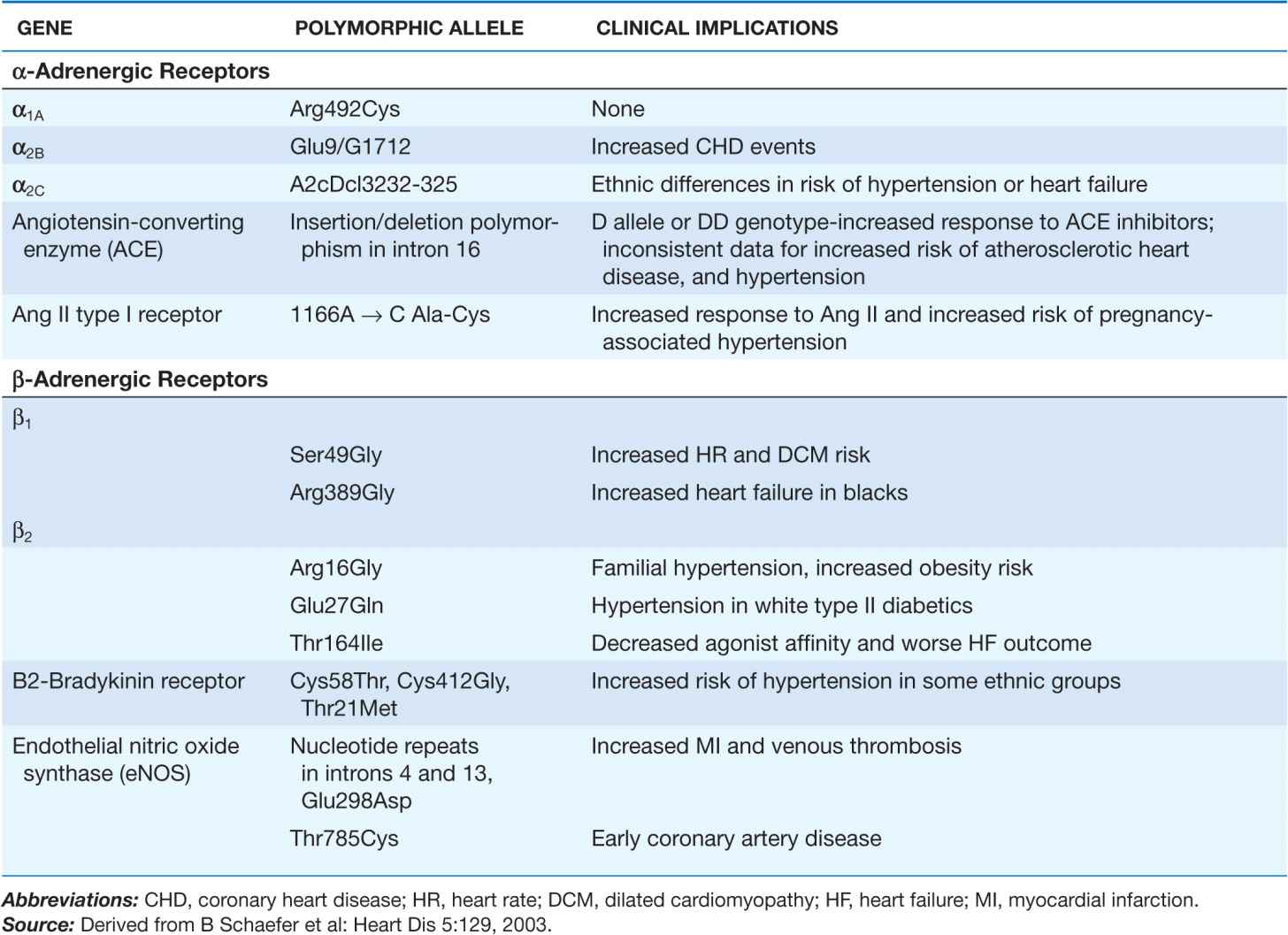