In the fourth week of embryologic development, paired vascular channels, known as the anterior and posterior cardinal veins, arise and join in the midline at the sinus venosus, the site of development of the cardiac system 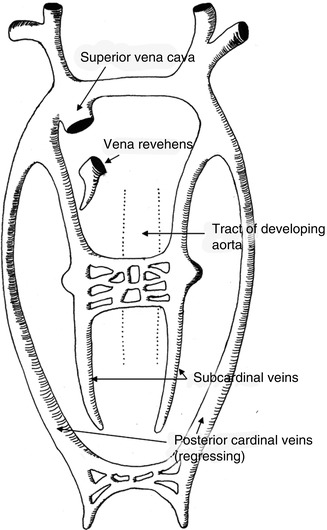 In the sixth week of embryologic development, the posterior cardinal veins begin to regress in their midpoint and join distally to form the future iliac venous bifurcation. The subcardinal veins develop and anastomose in the perinephric region. The venae revehentes develop as an outflow tract for the portal venous circulation and hepatic sinusoids, draining into the right atrium and forming an inferior anastomosis with the developing inferior vena cava
In the seventh week of embryologic development, the posterior cardinal veins have nearly completely regressed with the exception of the cranial and caudal extent, the latter of which has joined to form the iliac venous bifurcation. The mesonephric anastomosis of the subcardinal veins develops into the aortic collar; the usual developmental pattern is regression of the retroaortic component, leaving a preaortic left renal vein. The failure of the retroaortic segment to regress leads to a circumaortic or retroaortic left renal vein, depending on the persistence or regression of the preaortic segment. The subcardinal vein regresses at this point in all areas except for the suprarenal IVC. A new pair of venous channels arises at this time: the supracardinal veins. The right supracardinal vein anastomoses with the right subcardinal vein to become the renal segment of the vena cava and persists caudally as the postrenal segment until it anastomoses with the posterior cardinal vein remnant at the iliac venous bifurcation (Fig. 1.3). 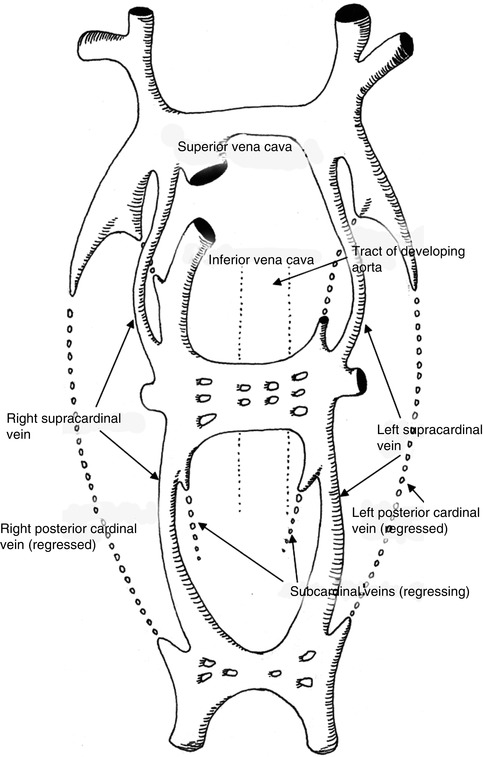 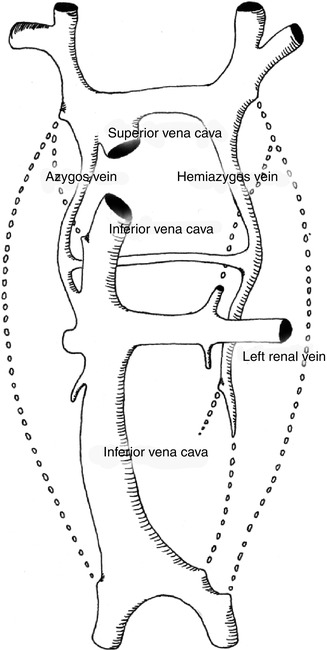 Primitive vascular channels occur in the limb during the third week of gestation. Initially, only a capillary network is present. This coalesces into larger plexuses and eventually, by the end of the third week, into large channels with the appearance of veins, arteries, and lymphatics [1]. One of the fundamental principles of extremity vascular development is that the vasculature tends to parallel major neural structures as the axons and Schwann cells secrete vascular endothelial growth factor, attracting vascular growth and encouraging differentiation [2]. In the leg, the sciatic nerve induces development of the deep venous plexus and, below the knee, the small saphenous vein (SSV). The femoral nerve guides the development of the great saphenous vein (GSV). Alterations in the dominance and reabsorption of primitive venous channels can lead to venous anomalies such as an axiofemoral trunk (predominance of the profunda femoris vein in the thigh and distal anastomosis to the proximal popliteal vein; the femoral vein is a small collateral channel) or bifidity of the femoral vein [3].

1.3 Histology of the Vein Wall

There are three layers to the vein wall, just as in the arterial system, namely, intima, media, and adventitia. However, there is a variance in proportion in the venous system. The intima is generally a single layer of cells lying on a thin connective tissue skeleton. In the GSV, there is a relatively thick media which resists dilatation. However, tributary vessels tend to be quite fragile with minimal media. Deep veins tend to have fewer smooth muscle cells and a greater proportion of connective tissue.

In the original Terminologia Anatomica description, all the venous structures of the foot were classified as superficial. However, in the latest interdisciplinary consensus conference on nomenclature, while the dorsal venous drainage of the foot is primarily superficial in its named structures, the plantar venous drainage is considered a deep venous system [4].
The venous drainage of the dorsal surface of the foot can be divided into a well-defined superficial system and an ill-defined deep system. The superficial system is comprised of a discrete dorsal venous arch which gives rise to the medial and lateral marginal veins, which drain into the great saphenous vein and the small saphenous vein, respectively. The dorsal deep venous system of the foot consists of the venae comitantes of the dorsalis pedis artery, which join to form the pedal vein, continuing as the anterior tibial veins. The anterior tibial veins enter the anterior compartment of the leg and run cephalad along the course of the anterior tibial artery. Perforating veins connect these two systems [4, 5] (Fig. 1.5). 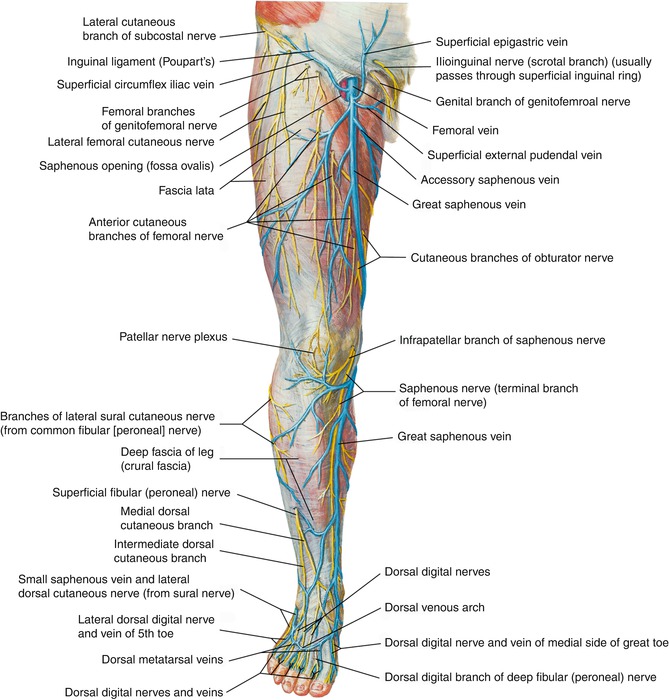 The superficial venous drainage of the dorsal foot. The primary drainage is through the dorsal venous arch, which connects to the great saphenous vein via the medial marginal vein and to the small saphenous vein via the lateral marginal vein. Perforators in the dorsal, medial, and lateral positions connect this system to the dorsal deep venous system (Copyright Elsevier. Used with permission)
On the plantar surface, the anatomy is deep system dominant due to the weight-bearing nature of the foot. The superficial veins tend to be ill-defined. The plantar venous network consists of the deep plantar arch which connects the medial and lateral plantar veins. These veins join to form the posterior tibial veins which then pass posterior to the medial malleolus and track in a cephalad direction along the posterior tibial artery. Perforators exist along the medial and lateral foot, but not appreciably in the plantar surface. Small accessory veins may drain the surface of the forefoot and flow directly into the peroneal or posterior tibial veins [4, 5] (Fig. 1.6). 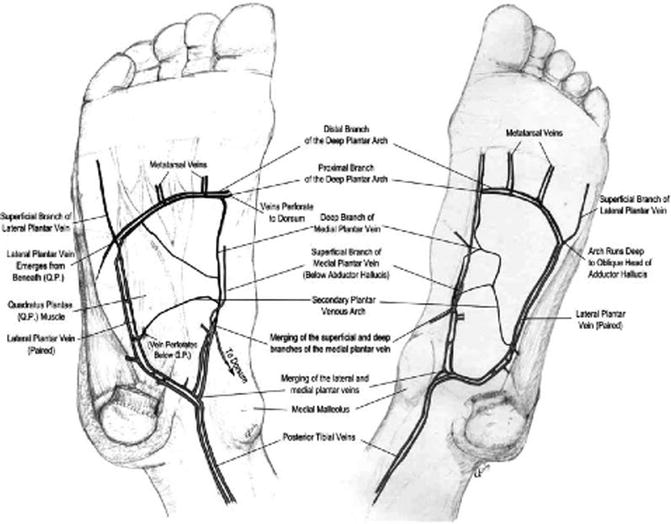 The great saphenous vein (GSV) system begins in the dorsal venous arch of the foot, which drains medially through the medial marginal vein to enter the caudal GSV. This then ascends anterior to the medial malleolus of the ankle, crosses the tibia, and continues to ascend the medial calf. In the distal two-thirds of the calf, this vein is intimately associated with the saphenous nerve, which supplies cutaneous innervation to the medial calf. The GSV then crosses the medial surface of the knee and continues cranially along the medial thigh to enter the deep system at the saphenofemoral junction, passing through the fossa ovalis located 3 cm inferior and 3 cm lateral to the pubic tubercle (Fig. 1.7). 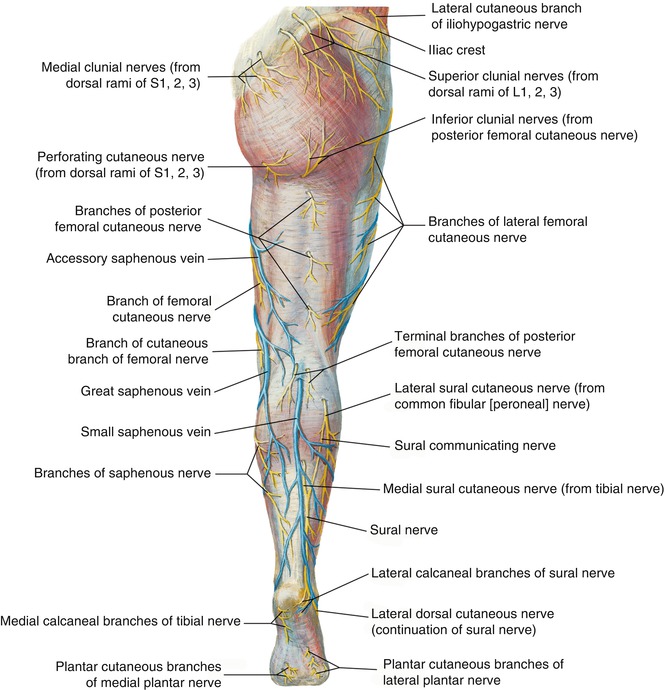 The great saphenous vein arises from the medial marginal vein as it passes anterior to the medial malleolus at the ankle. It rises in the calf region just medial to the tibial edge, in most cases. As it approaches the knee, it generally receives contributions from a posterior and/or anterior accessory saphenous vein. It then crosses the medial surface of the knee and runs along the medial thigh. As it nears the groin, it often is joined by accessory anterior and/or posterior saphenous veins. At the level of the saphenofemoral junction, additional tributaries such as the superficial epigastric, superficial circumflex iliac, and the external pudendal veins join as it then enters the common femoral vein (Copyright Elsevier. Used with permission)
In their study of 1,400 venous studies, Kupinski et al. documented the following size ranges for the superficial venous system: 2.2–10.0 mm in the proximal thigh, 1.5–8.8 mm in the distal thigh, 1.2–7.3 mm in the proximal calf, and 1.0–5.5 mm in the distal calf [6].
Several tributaries can enter the vein along its length. In the calf, both the anterior and posterior accessory GSV of the calf may be present, draining the lateral and posteromedial calf, respectively. Above the knee, the anterior accessory GSV of the thigh, if present, drains the lateral thigh and may provide a communication between the lateral superficial venous plexus and the GSV system. The posterior accessory GSV of the thigh drains the medial thigh and runs posterior to the GSV. There may also be an anterior and/or a posterior thigh circumflex vein draining the lateral and medial thigh, respectively, inferior to the accessory saphenous veins. The key differentiation between the actual GSV and accessory or tributary vessels is the saphenous fascial envelope, which runs along the entire length of the GSV. This separate saphenous compartment is bounded superficially by hyperechoic saphenous fascia and deeply by the muscular fascia and contains the saphenous veins, nerves, and small arteries. Saphenous tributaries and accessory, collateral, and communicating veins lie external to this compartment [4, 7] (Fig. 1.8). This fascial compartment has been described as an “Egyptian eye” on ultrasonographic examination, providing a reproducible sign useful for identification [8].

The saphenous compartment is bound superficially by the saphenous fascia and deeply by the muscular fascia. Contained within are the saphenous veins and saphenous nerve. The saphenous tributary vein is outside this compartment
The GSV has a great degree of variability. Kupinski et al. reviewed over 1,400 evaluations in 1,060 patients with duplex ultrasonography. The indication for the study was infrainguinal bypass in 86 % and coronary artery bypass in 14 % [6]. The standard arrangement most commonly described in anatomy textbooks is a single medial-dominant vein, and a single anterior-dominant vein in the calf occurs in 38–55 % of limbs studied [6, 9]. Variations in this system occur in both the thigh and the calf. In the thigh, there are five primary arrangements described by Kupinski: a single medial-dominant system (59 %), a branching double system (18 %), a complete double system (8 %), a single system with a closed loop (7 %), and a single lateral-dominant system (8 %). In less than 1 %, a more complex arrangement was found. In the calf, there were four major arrangements: single vessel anterior-dominant (58 %), double vessel anterior-dominant (27 %), double vessel posterior-dominant (8 %), and single vessel posterior-dominant (7 %). Rare cases of triple systems or complex systems below the knee were seen in less than 1 % of cases. Awareness of these variations is important when attempting to identify the great saphenous vein, as incorrect identification can lead to ineffective surgical treatment of venous disease or harvest of insufficient conduit for arterial bypass [6].
Only gold members can continue reading. Log In or Register to continue