(a, b) The Medtronic Melody® transcatheter pulmonary valve and its delivery system (Courtesy of Medtronic Inc., Santa Ana, CA, USA)

About eighteen months after the Melody valve’s implant, Prof. Alain Cribier [6] performed the first transcatheter aortic replacement. In this case an Edwards Sapien (Edwards Lifesciences, Irvine, CA) balloon expandable valve was used. An Edwards Sapien valve consists of three bovine pericardial leaflets handsewn to a stainless steel balloon expandable stent with fabric covering the lower portion of the stent to facilitate formation of a seal with the prosthetic material at the site of implantation. Currently available diameters include 23, 26 and 29 mm valve, and dominant percutaneous experience has been reported in the pulmonary and aortic sites (Fig. 16.2a, b). 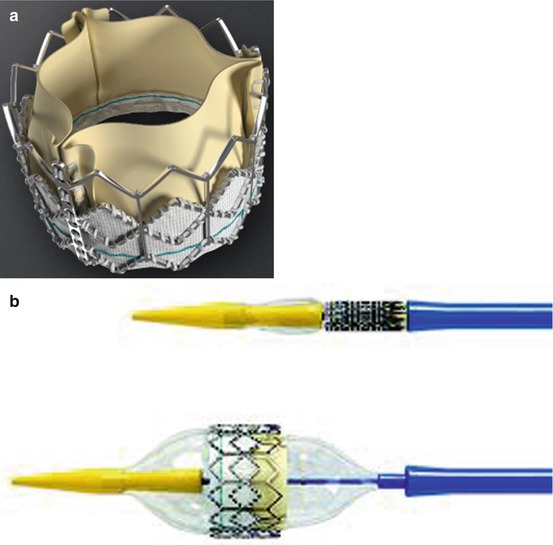 (a, b) Edwards Sapien valve and its delivery system (Courtesy of Edwards Lifesciences, Irvine, CA, USA)
In 2010 Hon et al. [7] reported implantation of an Edwards Sapien valve in a patient with a bioprosthetic valve using a hybrid approach with transcatheter delivery of the valve through thoracotomy access. The patient was a 48-year-old woman with ovarian and cardiac valvular carcinoid who underwent dissection of the latter, followed by tricuspid and mitral valve replacement using two Mosaic 27 mm bioprostheses (Medtronic Inc., Minneapolis, MN) and closure of an atrial septal defect using an autologous pericardial patch.
Because of severe deterioration of the clinical conditions (NYHA functional Class IV), she was rehospitalized. Transthoracic echocardiography revealed a normal functioning mitral bioprosthesis; however, the tricuspid bioprosthesis was severely stenotic with a trans-tricuspid valve gradient of 12 mmHg. Tricuspid regurgitation was graded as mild, and the inferior vena cava and hepatic veins were dilated. She was deemed to be a high-risk operative candidate due to her morbid obesity. A decision to perform a valve-in-valve tricuspid implantation was made. The procedure was performed in a hybrid operating room. The transjugular approach was considered, but the angle of the approach to the tricuspid prosthesis was a concern.
The first transcatheter tricuspid valve-in-valve procedure was performed by Leen van Garsse [8]. The patient described by van Garsse was not a surgical candidate, she was placed on extracorporeal circulation for the duration of the procedure, the valve was deployed under rapid ventricular pacing, and the older 24-F Edwards SAPIEN device was used.
Cerillo et al. [9] and Weich et al. [10] reported the implantation of a Edwards Sapien valve in the tricuspid site using the transjugular approach and suggested some advantages of (1) avoiding reopening the chest and the dissection of pleuropericardial adhesions, which is helpful in these patients with severe disease, and (2) having a relatively long wire fixed in the superior vena cava proximally and in the pulmonary artery distally that helps in the delicate process of orienting the transcatheter prosthesis and stabilizing it in its final position during the staged balloon inflation.
Nowadays most of the cases reported were approached by a transvenous vascular access with no significant access complications.
The procedure is usually performed under general anaesthesia. Imaging may be performed with either an intracardiac echocardiography (ICE) or a transoesophageal echocardiography (TEE); the 3-dimensional echocardiography may be particularly useful for the assessment of dysfunctional bioprosthetic valve morphology.
The kind of vascular access (jugular or femoral) is an important variable and depends by the orientation of the tricuspid valve. So preoperative radiographic evaluation of the bioprosthesis may therefore provide detail on the orientation of the valve and help decide on the best approach. In fact, in some patients, the valve is oriented more horizontally, and in this case jugular approach is unfavourable. The sizing balloon (performed with a compliant or semi-compliant balloon) provides information about the size of the valve and the resistance to dilatation.
The placement of the valves in the tricuspid position requires scaffolding to support them and thus is limited at present to those patients with previous tricuspid valve replacement.
The vast majority of surgical prostheses have a metal frame that makes radiographic positioning ideal. After a right ventriculography in different projections for the evaluation of the regurgitation and the orientation of the prostheses, a stiff 0.035” guidewire is placed preferable in the right pulmonary artery, and a long sheath is placed in the right ventricle (Fig. 16.3). 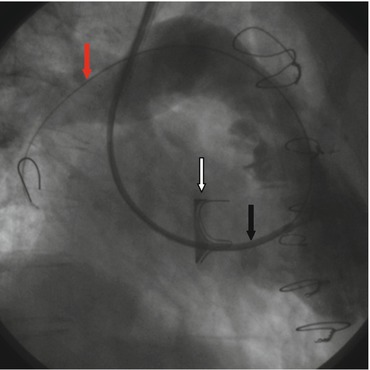 Angiogram in RAO showing the metal frame of the surgical prostheses (white arrow), and the stiff 0.035” guidewire placed in the right pulmonary artery (red arrow) with a long sheath is placed in the right ventricle (black arrow)
Afterwards pre-dilatation/pre-stenting of a stenotic bioprostheses can be undertaken but with caution as it risks fracturing or deforming the sewing ring (Fig. 16.4). An aortogram depicts the course of the right coronary artery in relation to the bioprosthesis. 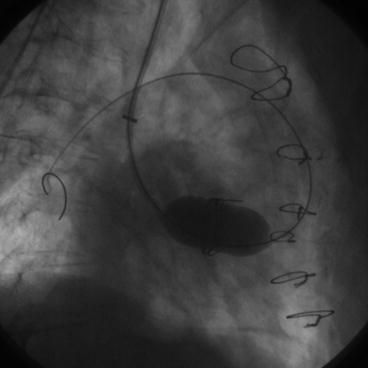 Angiogram in RAO showing the balloon catheter inflated into the bioprostheses
The percutaneous valve can be either the Melody or the Edwards Sapien valve. The Melody valve is longer in length than the Edwards Sapien valve; this characteristic may facilitate a coaxial alignment. The longer length of the Melody valve also allows it to cover the entire dysfunctional bioprosthetic valve, so stenting the deployment site before implantation is not strictly necessary. The size of the Melody may be a limit because the diameter of the dysfunctional bioprosthetic valves is frequently higher than 22 mm. The Melody may also be used in case of severe calcified stenosis of a bioprosthetic valve because the calcified tissue provides adequate support for the smaller-diameter Melody valve without a pre-stenting. It is not clear until now if the Melody valve will be susceptible to similar stent fractures in the tricuspid annulus seen when placed without presenting in the pulmonary position. The Melody valve is also chosen if the internal diameter is <24 mm.
Only gold members can continue reading. Log In or Register to continue