On the other hand, in patients presenting with isolated CCTGA, symptoms occur late and many survive into the 7th and 8th decade. In rare cases, patients can even live a full life without any symptoms, with the diagnosis made incidentally on autopsy [4]. Symptoms of exercise intolerance and dyspnoea often develop around the 4th or 5th decade and are mainly attributable to systemic atrioventricular incompetence and/or systemic ventricular failure [2–5].

Nowadays, surgical intervention often focuses on anatomical repair. However, in patients without associated malformations, or in patients who undergo physiological repair correcting for the associated malformations alone, the right ventricle and the tricuspid valve remain in the subsystemic position (Fig. 9.2). This segmental arrangement of the cardiac chambers is associated with an impaired prognosis [4]. At least moderate right ventricular dysfunction is present in 1/3 of patients by the age of 45 and increases with ageing [2]. Risk factors for the development of systemic right ventricular failure at older age are especially related to the associated cardiac malformations, both persisting and corrected, systemic tricuspid valve regurgitation, impaired coronary blood flow and complete atrioventricular block [2]. 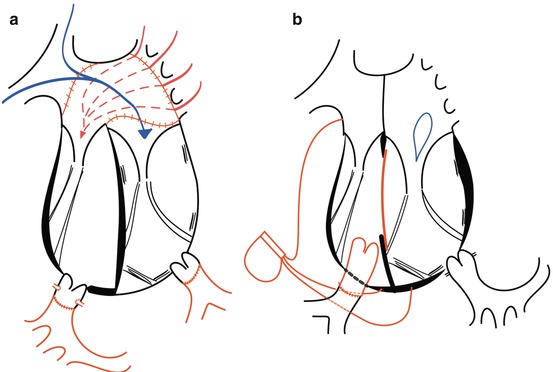 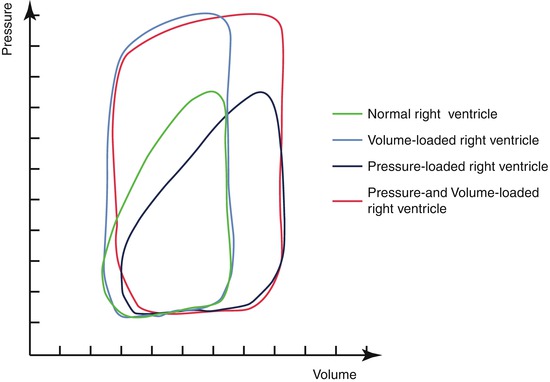 If there is an Ebstein-like malformation of the valve, severe regurgitation can be seen at birth. Otherwise, the valve tends to remain competent during the first decade of life, but becomes progressively incompetent during the second to fifth decades of life. Reasons for systemic tricuspid valve incompetence are (1) the anatomical abnormalities of the tricuspid leaflets, (2) geometric changes of the right ventricle, (3) annular dilatation, (4) changing loading conditions and (5) conductance abnormalities [2, 3, 12] (Fig. 9.4). Furthermore, increases in tricuspid valve regurgitation after (6) physiological repair are often encountered. 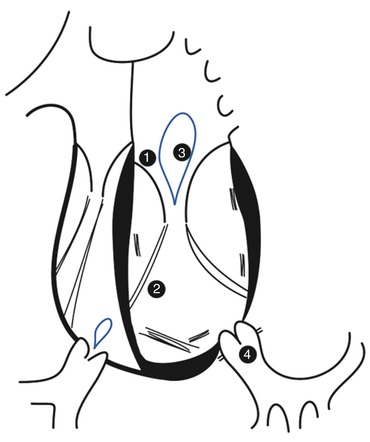 9.4.1 Anatomical Abnormalities of the Tricuspid Leaflets

Ninety percent of all patients presenting with CCTGA have associated lesions of the tricuspid valve. Apical displacement of the mural and septal leaflets is often present and is referred to as Ebstein-like changes of the tricuspid valve. However, other typical features such as a sail-like appearance of the anterior leaflet and significant atrialisation of the inlet portion of the ventricle are mostly absent. Symptomatology mainly depends on the degree of tricuspid valve regurgitation and the development of right ventricular dysfunction, rather than a decrease in stroke volume. Furthermore, patients are prone to bacterial endocarditis.

9.4.2 Geometric Changes of the Right Ventricle

Unlike the mitral valve, which only has the mural papillary muscles, the tricuspid valve has a septal papillary muscle giving chordal attachments to the septal leaflet. Because of the loading conditions, the interventricular septum is pushed towards the left ventricle in systole, causing a more spherical right ventricle and separating the septal and mural papillary muscles. Dilatation of the right ventricle and septal shift during systole both lower the coaptation point and shorten the coaptation length of the leaflets increasing tricuspid valve regurgitation. Interestingly, native left ventricular outflow tract obstruction or pulmonary artery banding increases left ventricular afterload, resulting in a less spherical right ventricle and improved coaptation of the tricuspid valve leaflets [13]. 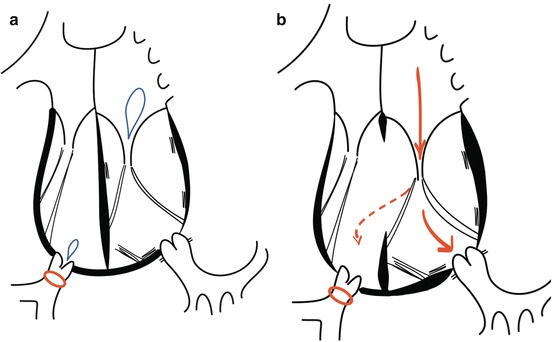 Patients with CCTGA are prone to develop AV conductance abnormalities. Similarly, after implantation of a pacemaker, the alteration of the contraction pattern can cause more severe tricuspid valve regurgitation as well.

Annular dilatation caused by ischaemia of the right ventricle, increase in afterload or geometric changes after surgery all give rise to an increase in tricuspid valve regurgitation.
Furthermore, increase in systemic AV regurgitation is often encountered after biventricular repair for CCTGA. Reasons for this increase are an insult of the cardiopulmonary bypass causing annular dilatation, traction on the tricuspid valve annulus caused by VSD closure, changes in the position of the ventricular septum and dilatation of the tricuspid annulus after relief of pulmonary stenosis [5, 14, 21, 22].

9.5 Intervention to Correct for CCTGA or to Prevent Development of Tricuspid Valve Regurgitation and Congestive Heart Failure

When the diagnosis of CCTGA is made, the treatment strategy mainly depends on the associated lesions. The focus lies on either restoring the normal loading conditions or preserving tricuspid valve and right ventricular function.

If no associated lesions are present, patients often remain asymptomatic until the fifth or sixth decade. However, when the diagnosis is made early, treatment can be proposed.
In the neonatal infant (<3 weeks of age), the double switch operation is considered the ideal solution in patients with CCTGA. This technique restores the left ventricle into its systemic position. Surgery consists of atrial rerouting by means of the Senning or Mustard procedure combined with the arterial switch procedure (Fig. 9.2). Early mortality has been reported between 0 and 9 % and freedom of reoperation 93 and 77 % at 5 years and 10 years follow-up, respectively [23, 24]. Late complications and morbidity consist of that of both procedures. Increased preload due to baffle leaks or decreased preload because of restrictive flow through a stenosed superior or inferior vena cava pathway is common. Furthermore, extensive atrial scarring after surgery creates a substrate for atrial arrhythmias. The arterial switch operation is often complicated by significant aortic insufficiency and dilatation of the ascending aorta as well as the occurrence of post-valvular pulmonary stenosis [25]. Lastly, patients often develop total atrioventricular block postoperatively, and sudden death due to lead fracture or exit block sometimes occurs. Furthermore, epicardial leads may cause coronary strangulation in young, growing children. Nevertheless, this procedure repositions the ventricles into their natural position and has shown to have good short- and midterm survival [23, 26, 27]. However, proposing aggressive surgery with its associated complications and issues in follow-up is difficult in an otherwise asymptomatic patient.
Performing the double switch operation in older children and in adults is proposed as well. However, in these patients, the left ventricle should be “trained” to withstand systemic pressures before anatomical repair is offered [16, 28]. The left ventricle can be trained by banding the pulmonary artery [16, 29]. Studies have indicated that the left ventricle can be trained before puberty to withstand systemic pressures. Hyperplasia rather than hypertrophy of the cardiac muscle cells occurs when the child is younger than 3 years and banding is performed [30]. After left ventricular training, the double switch operation can be proposed. Conversely, after puberty, training of the left ventricle has proven to be difficult with significant morbidity and mortality after anatomical repair is attempted [28]. Pulmonary artery banding has to be performed by several interventions, tightening the band to obtain a progressive increase in pressure load on the morphological left ventricle [28]. In older patients, cardiac hypertrophy causing impaired coronary flow and subendocardial ischaemia is a serious concern [16, 17, 23, 31]. Left ventricular function after anatomical repair declines in 15–20 % of all patients, and development of heart failure in the long-term period has been observed [32, 33]. Timing for anatomical repair is always complex in asymptomatic patients and should be weighted against the risk that the patient will develop systemic ventricular failure, the main determinants being age, right ventricular function and tricuspid valve regurgitation at the time of surgery [5, 9, 27, 34]. Therefore, postpuberty heart transplantation with or without bridging by ventricular assist device is the safest and most predictable solution.
Thirdly, early pulmonary banding can be proposed as a treatment option in patients with isolated CCTGA. This procedure can be performed with low morbidity and mortality and offers several benefits [13, 17, 20, 23, 25] (Fig. 9.5). By increasing afterload, the left ventricle is trained [17]. This increased afterload also causes a septal shift towards the midline position creating a less spherical right ventricle. This improves right ventricular function by enhancing ventricular interaction as well as approximates the papillary muscles resulting in better coaptation of the tricuspid valve leaflets and a higher coaptation point [13]. As a consequence, right ventricular preload is reduced with less dilatation and improved contractility of the right ventricle [16, 13, 15–17, 30]. These alterations delay the onset of congestive heart failure and the necessity of cardiac transplantation [16]. However, in the growing child, the pulmonary band becomes too tight over time [28]. A dilatable band, adjustable as the child grows, is an elegant option. It is possible to place a nylon band around the pulmonary artery, which is tied together by means of a series of clips (Fig. 9.6). By percutaneous balloon angioplasty, these clips can be moved distally and the degree of tightening can be adjusted and controlled [29]. As stated before, this approach can be chosen to train the left ventricle as a bridge to double switch surgery, but can also act as a long-term palliative or “open-ended” treatment option, to slow the development of tricuspid regurgitation and to preserve right ventricular function with the option of late reparative surgery. Early results of this approach have been reassuring with no mortality and low morbidity [29]. In early follow-up, it has shown to effectively stabilise right ventricular function and tricuspid valve regurgitation [20]. However, long-term prognosis remains to be established.