De Vega annuloplasty (Reproduced with permission from Antunes and Barlow [31])

While demonstrating a good midterm outcome [33, 34], the long-term result of this technique in a growing child remains to be documented. A theoretical concern about long-term tricuspid stenosis exists as the tricuspid valve annulus size is fixed in this approach.

Partial annuloplasty (Fig. 10.2) and commissuroplasty (Fig. 10.3) are commonly applied techniques for patients with localised leaflet prolapse or annular dilatation with failure of leaflet coaptation and functional central regurgitation. Usually, 5/0 polypropylene or 4/0 polyester sutures are used to locally reduce the annulus size along the commissure(s), where the regurgitant jet mainly comes from. This technique involves running parallel mattress sutures along the annulus from the anteroposterior commissure to the posteroseptal commissure. As a result, the re-formed valve is essentially bicuspid (posterior leaflet obliterated). This manoeuvre is essentially a functional commissuroplasty on the corresponding commissure. 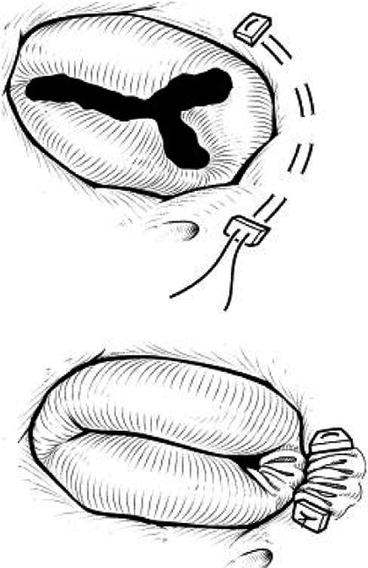 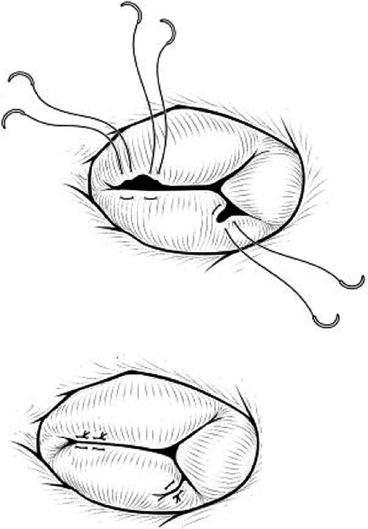 In this technique, the free edge of the septal and anterior leaflets is sutured to create a double orifice. In severe cases of malcoaptation, the leaflets are completely sutured together creating a single, posterior orifice (Fig. 10.4). This technique was originally devised for mitral valve repair [36] but has been applied with good results for the tricuspid valve [37, 38] also in the single-ventricle patient [35]. Edge-to-edge repair is suitable also after the De Vega annuloplasty [38]. 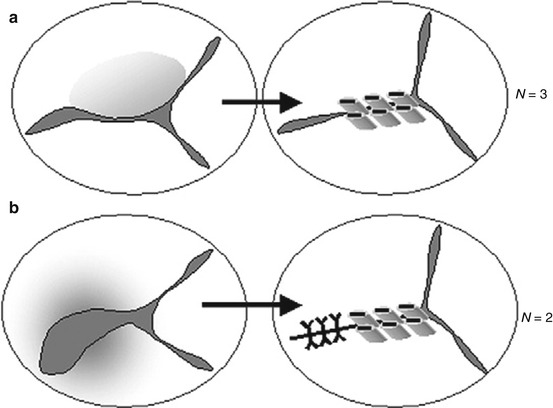 A cleft is a common leaflet abnormality in single-ventricle patients. Most often it is observed in a common atrioventricular valve but can exist in the anterior leaflet of the tricuspid valve as well. Standard cleft closure is achieved by simple Prolene interrupted sutures closing the gap. If there is a large cleft within a deficient leaflet tissue, a pericardial patch can be used to augment the leaflet.

Standard techniques of valvuloplasty may not result in optimal tricuspid valve function in a congenitally dysplastic atrioventricular valve when the leaflets are tethered by abnormally short chordae tendineae or when chordae are ruptured or absent altogether. In these cases, chordal replacement is a potentially ideal solution [39]. For chordal rupture or local deficiency, the chordae could be transposed from the opposite leaflet [40] although this technique is not always feasible in the morphologically abnormal tricuspid valve. Further, chordal replacement with polytetrafluoroethylene sutures has been shown to be a feasible and durable option, improving the mobility of leaflets in midterm follow-up [39].

Avoidance of prosthetic replacement of the tricuspid valve is desirable, especially in children, because of both the implications and complications of anticoagulation and the poor long-term function of smallish prosthetic valves in the right heart. HLHS can be thought to add further risk to this equation due to the inherent reserve of the single-ventricle heart. It may not tolerate the acute changes in afterload and ventricular volume that may occur with valve replacement [41].
However, there is a portion of the single-ventricle patients that will require valve replacement despite best efforts in valvuloplasties or have inherently valves so dysplastic that they are unsuitable for repair. Data for valve replacement in the HLHS population is very limited and mostly from a surgical era prior to year 2000. In a single-institution series of 500 patients, Gentles and colleagues [42] reported that systemic AVV replacement had been undertaken in 3 of 363 long-term survivors of the Fontan operation. Another large single-institution series reported that AVV replacement had been performed in 12 of 499 (2.4 %) of patients who had undergone a modified Fontan procedure [43]. The outcome for this subset of patients, however, was not detailed.
The largest data to date from The Children’s Hospital of Philadelphia for valve replacement in the single-ventricle patient would support the notion that the single-ventricle population is at increased risk for mortality when compared with other paediatric populations. The hospital mortality for valve replacement was 29 %, and there was a significant risk for late death or transplantation. Factors that may have contributed to the higher mortality include atrial arrhythmias, which were present in 41 % of patients [41]. The trend towards better outcomes in the modern surgical era is likely to benefit also this subset of patients, hopefully providing more promising result also for those single-ventricle patients requiring tricuspid valve replacement.

Tricuspid valve insufficiency is a common finding requiring intervention in about a quarter of HLHS patients at some point of their surgical palliative pathway. While often multifactorial in origin, it can derive, for example, from the systemic volume overload imposed on the valve that is designed for the low-resistance pulmonary circulation, worsening right ventricular function, annular dilatation and structural abnormalities. Imaging and assessing the tricuspid valve consists of echocardiography, angiography/cardiac catheter and magnetic resonance imaging. First and foremost it is important to determine that the repair of the aortic arch has been successful and that suboptimal arch reconstruction is not giving rise to tricuspid insufficiency.
Taking into consideration that some medium-term ‘normalisation’ of the enlarged right ventricle and tricuspid valve annulus would allow a better handling of the tricuspid valve dysfunction, the persistence of moderate-to-severe regurgitation necessitates valve repair. This can be undertaken concomitantly with a planned surgical stage or as a stand-alone procedure as appropriate. The decision to address the tricuspid valve should rely heavily on the assessment of right ventricular function, as in the presence of severe right ventricular function, the prognosis of these patients does not seem to improve despite successful valve repair. The timing is also related to the institutional experience and practice.
A variety of techniques for valve repair have been described and used with satisfactory short- and midterm outcomes. Currently, most patients with tricuspid valve insufficiency can achieve successful repair and their survival post-procedure is comparable to that of case-matched controls. However, long-term outcomes are yet to be conclusively documented.
Only gold members can continue reading. Log In or Register to continue