Atrial view of the normal tricuspid valve. The anterior (A), posterior (P), and septal (S) leaflets are separated by commissures. The valve orifice allows to observe several chordae tendineae

RTVD may occur early in the course of the rheumatic disease. The presence of RTVD is particularly frequent in India, where juvenile tricuspid stenosis is more commonly seen associated with mitral stenosis or regurgitation and more frequent in females (60 % of cases). Isolated tricuspid stenosis was present in 7.4 % of patients [3].
Other causes of organic tricuspid valve disease are identified, such as endocarditis, radiation therapy, congenital anomalies, systemic lupus, antiphospholipid and carcinoid syndromes, intravenous drug-induced valve infection, and myxomatous disease, but rheumatoid arthritis continues as the main etiology in underdeveloped areas.
In case of tricuspid regurgitation, it was suggested in the past [7] that a pulmonary artery systolic pressure >60 mmHg would favor functional tricuspid regurgitation, while a pulmonary pressure <40 mmHg would favor primary tricuspid disease. This concept can be applied to distinguish primary RTVD from tricuspid regurgitation secondary to left-sided rheumatic valve lesions. However, clinical experience has widely demonstrated that the pulmonary arterial systolic pressure, mean pulmonary arterial pressure, and pulmonary vascular resistance did not necessarily distinguish primary from functional tricuspid regurgitation [2].
Since the beginning of open-heart surgery, valve reconstruction is considered the gold standard for surgical treatment for tricuspid valve disease. Satisfactory long-term results of valve repair compared to valve replacement have been extensively reported. However, there is limited information in the literature on the outcome of valve repair in RTVD. Today, modern diagnostic techniques and surgical strategies for patients with organic tricuspid valve disease have significantly improved postoperative survival and reduced morbidity.

Rheumatic tricuspid valve dysfunction is due to stenosis, regurgitation, or mixed lesion. Autopsy studies indicate that the tricuspid valve shows similar morphological abnormalities than the mitral valve [2], although the severity of the disease is quite less intense. The tricuspid leaflets may show some fibrous thickening and retraction, especially at the free edges. Calcium deposits are scarce and less extensive than in rheumatic mitral disease. In our experience, tricuspid commissural fusion occurs in approximately one-third of the cases. Mild thickening and fusion of the chordae tendineae may also occur. In addition, valve lesions appear to be distributed focally, affecting only to limited areas of the valve complex. Large areas of leaflet calcification and severe morphological deformities are rarely seen [2, 4–6].
Rheumatic involvement of the tricuspid valve is a combination of leaflet fibrosis, calcified thickening, commissural fusion, and subvalvular apparatus shortening due to fibrosis. Subvalvular shortening results in significant valve mobility restriction producing regurgitation and/or stenosis.
Fusion of tricuspid commissures, stiffness of the leaflets, and/or chordae fusion result in slow progression of valve stenosis [8]. Primary affectation of the valve causes progressive right ventricular dysfunction, dilatation of the tricuspid annulus, and functional valve incompetence. On the other hand, tricuspid regurgitation can also be observed in the setting of RHD, in the absence of primary morphological modifications of the tricuspid valve. In fact, it is the most common form, appearing secondary to severe affectation of the mitral and aortic valves. The absence of a real fibrous ring [8, 9] appears to convert the region of the annulus into the weakest part of the tricuspid complex. This should displace the attachment of the leaflets altering valve geometry and inducing development of tricuspid regurgitation. Of note, evaluation of tricuspid regurgitation in the context of both RHD and other heart diseases is difficult since some degree of valve regurgitation occurs in normal subjects [4].

Timing of surgery remains controversial, mostly due to the limited clinical data reported and their heterogeneous etiology. There is a general agreement that valve repair is preferable to valve replacement in RTVD, when technically possible, and surgery should be carried out early enough to prevent right ventricular dysfunction. Surgery of the tricuspid valve is usually considered at the time of surgical treatment of left-sided valve lesions.
ESC/EACTS Guidelines on the management of valvular heart disease – version 2012 – [10] recommend careful evaluation of the tricuspid valve since tricuspid disease is almost always associated with left-sided valve lesions, which dominate the presentation. Surgery should be carried out early enough to avoid irreversible right ventricular dysfunction. ESC/EACTS Guidelines also indicate that, when technically possible, conservative surgery is preferable to valve replacement, for which bioprostheses are preferred. The current indications for primary rheumatic tricuspid valve surgery are (1) patients with severe or moderate primary tricuspid regurgitation undergoing left-sided valve intervention, (2) symptomatic patients with severe isolated primary tricuspid regurgitation, and (3) asymptomatic or mildly symptomatic patients with severe isolated primary tricuspid regurgitation and progressive right ventricular dilatation and dysfunction [10]. In cases with pure tricuspid stenosis, percutaneous balloon valvuloplasty can be attempted as a first approach if tricuspid stenosis is isolated or if percutaneous mitral commissurotomy was indicated [10].
Others reported that surgery should be limited to symptomatic patients with severe primary TR or secondary TR with a significant dilatation of the annulus (≥40 mm) [11]. In persistent or recurrent severe TR after left-sided valve surgery, isolated operation on the tricuspid valve should be only considered in patients who are symptomatic and have progressive right ventricular dilatation [10, 12].

During the last 30 years, more than 1,200 patients with tricuspid valve disease required surgical treatment at our institution, the “Hospital Universitario Marqués de Valdecilla,” University of Cantabria. Approximately 30 % of them had organic RTVD. Most of them were in NYHA classes III–IV and on atrial fibrillation (83.8 %). Previous heart valve surgery was performed in 26.8 % of them, mainly on the mitral valve. Significant high pulmonary alveolar resistance, total pulmonary vascular resistance, and/or right ventricular dysfunction were detected in 67.6 % of patients.
Doppler echocardiography remains the most common, noninvasive tool used for the diagnosis of RTVD (Fig. 13.2). Significant thickening or diastolic doming of the valve which limits its normal movements and opening is the most sensitive criterion to diagnose tricuspid stenosis. In our experience, 30 % of tricuspid patients showed those echocardiographic findings, as well as increased mean and end-diastolic velocities across the valve. Leaflet and chordae tendineae thickening was confirmed during the surgical procedure (Fig. 13.3). 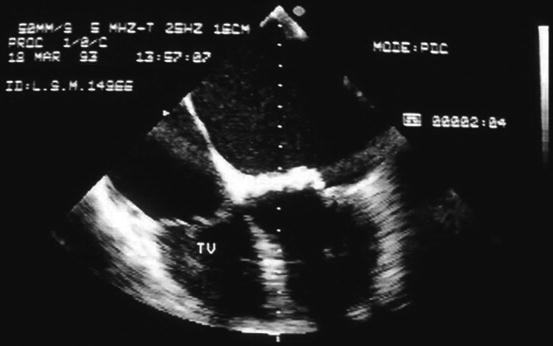 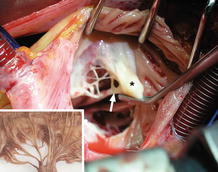 Operative view of a mixed rheumatic tricuspid lesion. Note leaflet fibrosis and thickening (asterisk) and a thickened subvalvular apparatus (arrow). Inset: ventricular side of a normal tricuspid valve. Note regular size and fan-shaped distribution of chordae tendineae
In our experience [1, 13], for more than three decades with a substantial number of patients with primary tricuspid valve disease of rheumatic origin surgically treated, with completeness of long-term follow-up, valve repair was significantly superior to replacement of the valve. As Singh et al. reported [14], we have found that valve reconstruction was associated with more favorable results in terms of better perioperative and midterm outcome and event-free survival than tricuspid valve replacement. On the contrary, tricuspid valve replacement was associated with a high hospital mortality and an unsatisfactory midterm follow-up [13, 15].
Only gold members can continue reading. Log In or Register to continue