In cases of septal leaflet tethering owing to adherences or impingement of the ventricular septal defect (VSD) patch, poor coaptation between the septal and anterior leaflets can occur as shown in this drawing. The dotted line represents the approximate area of the previously placed VSD patch 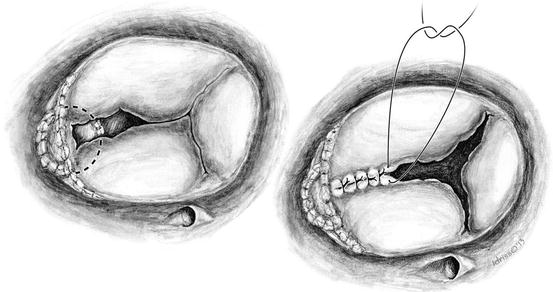 On the left, the poor coaptation of the anterior and septal leaflets are noted and evaluated for the purpose of suture repair by leaflet apposition. On the right, sutures are being placed to coapt the anterior and septal leaflets which will treat the commissural moiety and lend some structure to the valve apparatus. Individual sutures are placed toward the center of the valve in order to achieve a competent valve which can be assessed by a saline-filled bulb syringe. Aortobicaval cardiopulmonary bypass with cardioplegic arrest is performed to afford more accurate suturing and assessment of resultant valve function

Follow-up data reflecting on the durability of tricuspid valve repair after complete correction of TOF is scant [4, 6, 7]. Furthermore, confounding factors related to RV geometry and dimensions, pulmonary valve functional status, pulmonary hypertension, as well as the presence or absence of concomitant right bundle branch block or QRS widening all render difficult interpretation of the isolated efficiency of surgery on the tricuspid valve. Clear guidelines are lacking as to indications for tricuspid valve surgery for insufficiency in patients after TOF repair who may be symptomatic or not and may have degrees of insufficiency resulting from primary trauma to the valve during initial repair or secondary insufficiency owing to RV dilatation and annular enlargement. As overly conservative management will lead to irreversible valvar and ventricular damage and ultimately to an increased risk of sudden death, it seems justifiable to perform relatively straightforward and reproducible techniques in an attempt to create valve competence and enhanced right-sided hemodynamics, without taking unreasonable risks with regard to excessive bypass and/or cross-clamp times [8].

Isolated double-orifice tricuspid valve is an extremely rare congenital anomaly [10, 11], with less than 30 cases described in the literature [11]. More frequently, although still rare, it is associated with other congenital anomalies such as septal defects, Ebstein anomaly, TOF, mitral and pulmonary valve anomalies, and transposition of the great arteries [10, 12]. In 1876 Greenfild first described it for the mitral and tricuspid valves [13]. Also known as AV valve duplication, three different types are distinguished: type 1, with a simple fenestration in a leaflet; type 2, with fusion of leaflet tissue across the orifice dividing it in two but with normal AV valve papillary muscles; and type 3, with each orifice being supported by its own tension apparatus [10, 14].
Rarely, the valve may function normally, but more often it is insufficient, stenotic, or a combination of both [11]. Surgery, if at all indicated, will address the stenotic or insufficient components accordingly. In patients with associated defects, even with a correctly functioning double-orifice tricuspid valve, the detachment of the anterior and septal leaflets is often necessary to enhance visualization for repair of other defects, followed by reattachment at the annular level [12]. Results of repair are reported satisfactory in all case series [14, 15]. However, the correction of concomitant congenital cardiac anomalies is usually the indication for surgery and determines the outcome (Figs. 14.3 and 14.4) [12, 14, 15]. 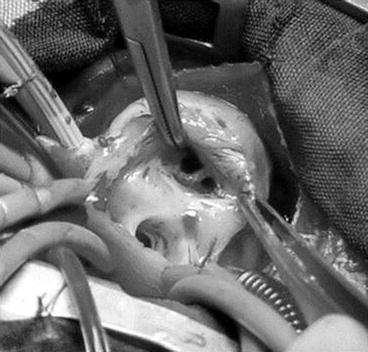 Uhl’s anomaly is an extremely rare congenital condition in which the RV myocardial tissue is lacking and replaced by fibroelastic tissue. The resulting RV is dilated and noncontractile, leading to various degrees of right heart failure and TI (Fig. 14.5) [16–20]. Pulmonary blood flow is dependent on right atrial contraction and paradoxical septal motion [18]. Surgical options are limited and include cardiac transplantation or conversion to single-ventricle physiology [16, 17]. In selected patients, this initially involves atrial septectomy, tricuspid valve exclusion, and a bidirectional Glenn anastomosis, with or without RV plication [16, 18–20]. These variants of one-and-a-half repair are often followed by total cavopulmonary connection [17, 18]. Historically, surgical results have been poor, albeit case reports in the more modern era have resulted in patient survival, with a more aggressive approach toward single-ventricle palliation and RV exclusion [18]. Occasionally, a patient may have moderate to severe RV dysfunction, which may allow for some RV developed pressure and therefore aid in cardiac output. Under these circumstances, tricuspid annuloplasty techniques can be employed to help with pressure-derived forward flow through the pulmonary artery circuit, which is clearly better than Fontan physiology. This is rare, however (Fig. 14.6). 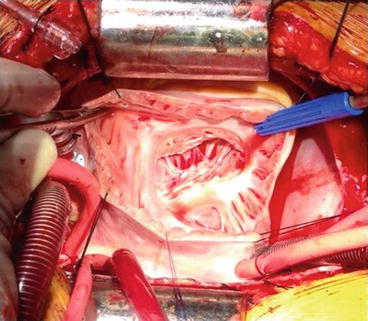 Photograph showing a transatrial view of the tricuspid valve and thinned right ventricular cavity in a patient with Uhl’s anomaly in an 18-year-old female. There was significant tricuspid regurgitation with developed pressure in the right ventricle, which allowed tricuspid annuloplasty and pulsatile pulmonary artery flow

Color flow Doppler echocardiograms showing preoperative severe tricuspid regurgitation (a) in a patient with Uhl’s anomaly who underwent ringed annuloplasty with a # 28 ring. The postoperative result is shown (b) with significantly improved tricuspid valve function

In patients with AV canal, right-sided AV valve insufficiency may result from RV dilatation from massive left-to-right shunting and resultant annular dilatation, from technical error at the time of repair in judging the level of ventricular septation between the two future AV valves and/or insufficient availability of tissue to achieve adequate coaptation of leaflets, from clefts in the right-sided valve, or from straddling/overriding [21–28]. Furthermore, unbalanced AV canal with a right or dominant left ventricle may be associated with TI induced by pulmonary hypertension, insufficient RV contraction and functional TI, or overriding/straddling. Indications for surgery are unclear for isolated TI, as associated pulmonary valve and RV pathology are often confounding. However, they may include but are not limited to symptoms or reduced exercise intolerance, cyanosis (concomitant interatrial communication), progressive RV dilatation, progression of RV dysfunction, and onset/progression of arrhythmias [24]. Depending on the underlying mechanism, appropriate corresponding techniques may be used to achieve valvar competence, including De Vega annuloplasty, Kay-Wooler plasty, ring annuloplasty, surgical creation of a double-orifice valve, patch enlargement of a leaflet, and a one-and-half repair in the case of unbalanced ventricles with a bidirectional cavopulmonary anastomosis (Fig. 14.7) [5, 6, 21–28]. 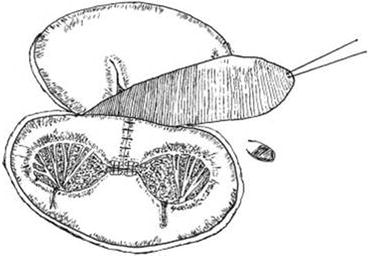 The cleft of the mitral valve was closed and a double-orifice mitral plasty was performed. The inferior edge of the autologous pericardial patch was fixed on the right side of the ventricular septum (Reproduced with permission from Lai et al. [21])

In single-ventricle physiology and an incompetent tricuspid valve, the majority of cases are represented by HLHS or unbalanced AV canal with a hypoplastic RV. Mechanisms are complex and multifactorial, including chronic volume overload, structural AV valve abnormalities, and myocardial damage from subendocardial ischemia and resulting papillary muscle dysfunction along with regional ventricular wall motion abnormality. Despite documented systemic ventricular dilatation from chronic volume overload leading to annular dilatation and TI from lack of leaflet coaptation, the vast majority of insufficient tricuspid valves in single ventricles have structural anomalies, including bileaflet or quadrileaflet valves, accessory orifices, and prolapsed leaflets. Hence, despite the myth or wishful thinking for volume unloading at stage II palliation for HLHS or other single-ventricle variants, valve insufficiency will often not improve by cavopulmonary anastomosis alone.
In single-ventricle physiology, TI occurs rarely at birth and therefore seems to be an acquired lesion. The rare neonates who present with severe valvar insufficiency are usually triaged to cardiac transplantation. With progressive and increasing AV valve insufficiency, the question of timing for an operation becomes crucial [17]. Insufficiency can develop after stage I palliation and, if severe enough, mandate an interstage operation prior to stage II. If mild to moderate, repair can be deferred and performed concomitantly at stage II palliation. Repairs are recommended at stage III Fontan completion only if a simple repair can be done (i.e., without unreasonable additional bypass or cross-clamp times) [17], as perioperative morbidity and surgical mortality may otherwise reach prohibitive levels. Finally, repair at Fontan conversion may be indicated if mild to moderate regurgitation exists [29].
Techniques of repair are variable and include Alfieri creation of a double-orifice valve or the Alfieri clover technique [23, 30], a Carpentier ring plasty, edge-to-edge repair [31], suture annuloplasty, cleft closure, patch augmentation of a leaflet, chordal repair, bridging annuloplasty [32, 33], and chordal replacement among others (Figs. 14.8, 14.9, 14.10, 14.11, and 14.12) [30, 31, 33, 34]. 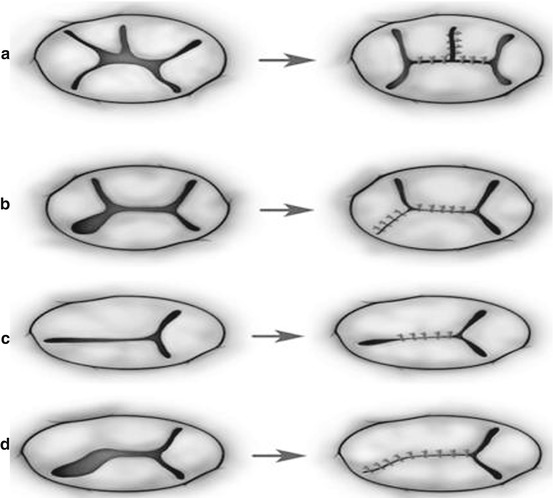 Two common types of edge-to-edge repair for repairing the morphologically common atrioventricular valve (a, b) and the tricuspid valve (c, d). (a) The superior and inferior bridging leaflets are sutured together and the cleft is directly closed. (b) A noncoapting commissure is entirely closed in addition to the edge-to-edge suture on the superior and inferior bridging leaflets. (c) The anterior and septal leaflets are sutured together making two effective orifices. (d) A noncoapting anteroseptal commissure is totally obliterated in addition to the edge-to-edge suture (Ando and Takahashi [31], discussion 1576–1577. Reproduced with permission from Honjo et al. [33]) 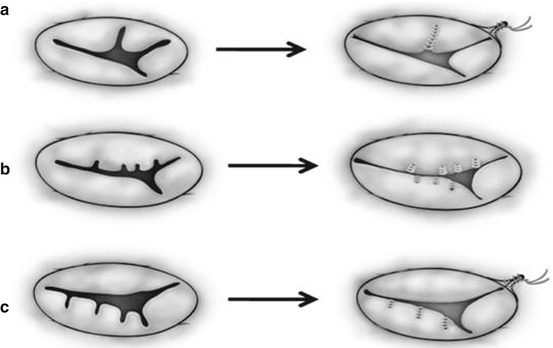 Surgical strategies to repair dysplastic or dysmorphic tricuspid valve in hypoplastic left heart syndrome hearts. (a) Standard, direct cleft closure along with annuloplasty (functional commissuroplasty) on the anteroinferior commissure. (b) Repair of the irregular dysplastic leaflets. (c) Repair of dysmorphic leaflets by means of the edge-to-edge-type repair (Reproduced with permission from Honjo et al. [33])

Technique of chordal replacement. A single 4-0 expanded polytetrafluoroethylene suture is attached to the rim of the valve leaflet and the ventricular wall at the level corresponding approximately to the location of the papillary muscle origin and reinforced at both points with Teflon felt pledgets. The insets indicated by arrows show the detail of leaflet and ventricular wall attachment (Reproduced with permission from Reddy et al. [34]) 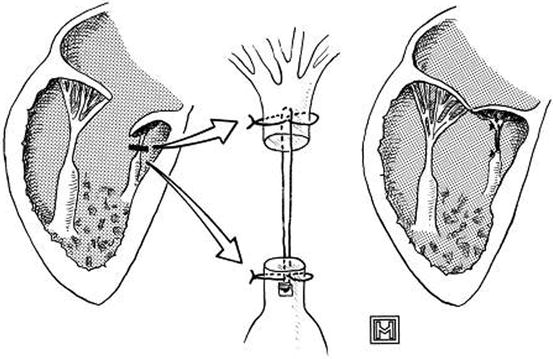 Technique of chordal augmentation. The unrepaired valve, with short chordae, is shown at the left. The short chordae are transected and augmented, as indicated by the arrows, with one 2-0 expanded polytetrafluoroethylene suture, which is reinforced at its proximal and distal attachments with 4-0 polypropylene sutures (Reproduced with permission from Reddy et al. [34])
Only gold members can continue reading. Log In or Register to continue