Surgery for Congenitally Corrected Transposition of the Great Arteries

CHAPTER 126 Surgery for Congenitally Corrected Transposition of the Great Arteries

Training of the Left Ventricle
Investigations and Evaluation
Surgical Options

Congenitally corrected transposition of the great arteries is a rare defect, seen in approximately 0.5% of patients with congenital heart defects.1,2 It entails discordance of the atrioventricular (AV) connections and discordance of the ventricular arterial connections, so there is double discordance. The morphology of the heart is distinctly abnormal, but the circulatory system is physiologically normal. Commonly, congenitally corrected transposition is associated with ventricular septal defects (VSDs), pulmonary stenosis, dysplasia of the tricuspid valve, and conduction abnormalities (e.g., heart block usually develops).3–5 Although this condition can be compatible with a normal life span,6,7 the majority of patients require surgery to repair the associated cardiac anomalies, and many develop heart failure because of systemic morphologic right ventricular (RV) dysfunction, usually with tricuspid valve regurgitation.8–11 Historically, surgery has been directed toward managing the associated cardiac anomalies, closing the VSD, relieving pulmonary stenosis, repairing or replacing the tricuspid valve, and placing pacemakers to manage the conduction abnormalities. This so-called classical or conventional (physiologic) repair maintains the morphologic right ventricle as the systemic ventricle. More recently, the morphologic left ventricle has been restored to the systemic circulation by an atrial switch (Senning or Mustard procedure) and an arterial switch or Rastelli procedure to connect the aorta to the morphologic left ventricle.12–15

In the usual situs solitus arrangement with normal systemic and pulmonary venous drainage, the ventricular apex of the heart usually points to the left side of the patient, but mesocardia and dextrocardia are common, occurring in up to 20% of cases.4,16 Malposition of the ventricular mass so that it comes to lie in front of the atria and venous drainage to the heart can make surgical access to these structures difficult. In situs inversus, which occurs in about 5% of cases, mesocardia and levocardia can occur. It seems that extreme malposition of the ventricular mass is commonly associated with severe pulmonary stenosis or pulmonary atresia in association with a large VSD.16 Characteristically, the aorta is anterior and to the left side of the more deeply placed pulmonary artery—hence the older term for this condition, L-transposition. However, the aorta can be more anterior to the pulmonary artery and even on the right side. Likewise, the morphologic left ventricle is usually to the right and slightly inferior to the morphologic right ventricle; however, the position of the ventricles relative to each other can show great variability.3 The ascending aorta is often quite short and well over to the left side of the mediastinum in situs solitus, again making surgical access difficult. In the rarer form of situs inversus, the aorta lies anterior and to the right of the posterior pulmonary artery and is usually more accessible.

In congenitally corrected transposition of the great arteries without associated cardiac anomalies, the circulation is physiologically normal with systemic venous return passing through the right atrium, through the mitral valve, and then into the morphologic left ventricle. Here, the morphologic left ventricle pumps blood through the pulmonary arteries into the lungs, from whence it returns to the pulmonary veins and to the left atrium. The blood flow continues through the tricuspid valve and into the morphologic right ventricle, where it is pumped around the systemic circulation via the aorta (Fig. 126-1). Without other cardiac anomalies, patients with congenitally corrected transposition can survive well into adult life without symptoms. It is the associated anomalies—VSD, pulmonary stenosis, abnormalities of the tricuspid valve, and development of arrhythmias or complete heart block—that seem to predispose the patient to the development of cardiac failure early in life. 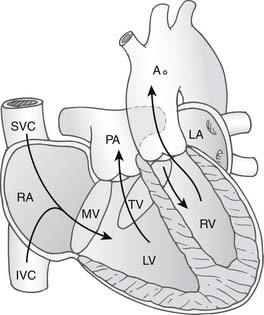 VSD occurs in about 70% of cases.4 It is usually isolated and in the perimembranous region. An isolated VSD can also occur in the infundibular region, and they may be multiple. When associated with severe pulmonary stenosis or pulmonary atresia, the VSD is usually subaortic and large, extending from the perimembranous region to beneath the aortic valve. This is important, because it allows the VSD to be tunneled to the aorta when the morphologic left ventricle is committed to the aorta as a systemic ventricle.

The mitral valve is usually normal in congenitally corrected transposition. There are usually two well-formed papillary muscles on the lateral wall of the left ventricle. Occasionally, we have noted a cleft in the septal component of the mitral valve.18

The Ebsteinoid displacement of the tricuspid valve into the body of the morphologic right ventricle is not associated with any atrialization of the RV free wall. Thus, it is not strictly equivalent to an Ebstein tricuspid valve in a normal heart. In addition, when functioning at lower pulmonary pressures after a double-switch procedure, the regurgitation is markedly reduced; that is, it is not a low-pressure regurgitant valve but tends to be a high-pressure regurgitant valve.

Rarely, both straddling and override of the AV valves can occur, usually in association with a degree of hypoplasia of the left or right ventricle.21–23

Abnormalities of the aortic arch, including interruption of the aorta and coarctation, can occur. 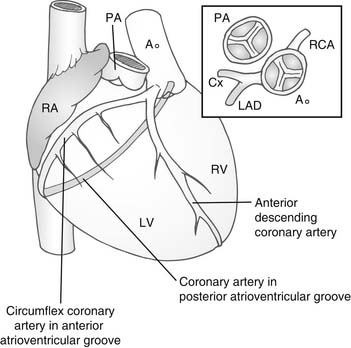 The abnormalities of the conduction system in congenitally corrected transposition have been well described.24–27 Because of malalignment of the AV septum, there is an anterior and a superior AV node in the atrial septum adjacent to the mitral and pulmonary valve. This gives rise to a penetrating bundle that passes around the free wall of the left ventricle in a subendocardial position anterior to the pulmonary valve. The bundle then sweeps down onto the ventricular septum in the morphologic left ventricle, supplying a left bundle branch over the septal surface of the left ventricle and a penetrating right branch into the morphologic right ventricle. The sinus node is in a normal position adjacent to the entrance of the superior vena cava into the right atrium (Fig. 126-3). 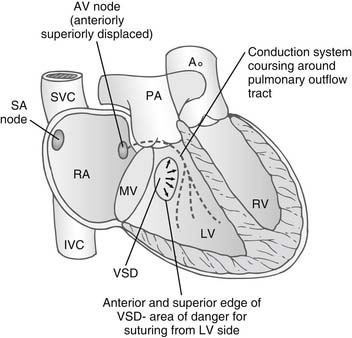 In the rarer form of situs inversus, the normally positioned AV node that is in the triangle of Koch superior to the coronary sinus persists and gives a penetrating branch to the ventricular septum but inferior and posterior to the pulmonary valve. These pathways are important because in situs solitus, when there is a VSD in the perimembranous region, the bundle passes superior to the VSD around the pulmonary outflow tract and then down on the leftward or anterior margin of the VSD. In the rarer forms of situs inversus, the bundle passes on the inferior margin of the VSD on the morphologic LV surface. Occasionally, both posterior and anterior AV nodes exist, and a loop of conduction tissue can encircle the VSD when it is present. Sutures to close the VSD are ideally placed from the morphologic RV surface of the VSD to avoid damaging the conduction system.28 The longer course of the conduction system to the ventricles associated with the malalignment of the atrioventricular septum has been given as a reason for the development of complete heart block.

CLINICAL PRESENTATION OF CONGENITALLY CORRECTED TRANSPOSITION OF THE GREAT ARTERIES

A patient’s clinical presentation depends on the presence or absence of associated cardiac anomalies. Without such anomalies, patients may be entirely free of symptoms well into late adult life. However, this is an unusual, if not rare, situation. More commonly, even in the absence of associated malformations, a degree of congestive cardiac failure develops over the lifetime of the patient, usually aggravated by the development of progressive tricuspid regurgitation.7

When associated with a VSD, presentation in early infancy is usually with congestive cardiac failure resulting from pulmonary overflow from the left-to-right shunt. In view of heart failure and the risks for pulmonary hypertension and progression to pulmonary vascular disease, medical management with diuretics and angiotensin-converting enzyme (ACE) inhibitors is usually supplemented with pulmonary artery banding. VSD in this condition usually occurs with a degree of congenital pulmonary stenosis and can produce a nicely balanced circulation without heart failure or marked cyanosis. The patient may be very well and stable for many years without the need for medical or surgical intervention. When the pulmonary stenosis progresses or if it is severe initially, cyanosis may be the cause of clinical presentation, and early systemic-to-pulmonary shunting may be required. Pulmonary atresia with a large perimembranous VSD extending to the subaortic region is a well-recognized combination of associated cardiac anomalies, and a neonate in this situation usually presents with severe cyanosis and requires an early systemic shunt.

A small percentage of patients present in early infancy with severe congestive cardiac failure, sometimes associated with pulmonary hypertension. This is usually associated with marked tricuspid regurgitation secondary to dysplasia of the tricuspid valve, and it is often associated with a VSD that may aggravate the heart failure. Early surgical management is mandatory in these critically ill infants.18

Thus, there is a wide range of possible presentations that vary with the intracardiac anatomy, ranging from asymptomatic adults to infants in severe congestive cardiac failure. Depending on the degree of pulmonary stenosis or atresia, some patients may have quite well balanced circulation with mild cyanosis, whereas others have severe cyanosis requiring systemic shunts in the neonatal period. Throughout the patient’s life, the clinical course may be complicated by the development of complete heart block and other cardiac arrhythmias.

The main concern highlighted in many papers8-11,19,29–31 has been the unpredictable way the morphologic right ventricle in association with tricuspid valve regurgitation can fail when it remains as the systemic ventricle. The development of RV failure can occur primarily without previous surgical intervention and is usually associated with dysplasia of the tricuspid valve, causing tricuspid regurgitation. RV failure may also occur secondarily after conventional repair of associated cardiac defects such as VSD closure or the relief of pulmonary stenosis or atresia when the right ventricle remains in the systemic circulation.

Training of the Left Ventricle

Training of the left ventricle has become an important aspect in congenital heart management since Mee’s group37 and others showed that it was possible to retrain the left ventricle in infants with dextrotransposition after a failing atrial repair to restore the left ventricle to the systemic circulation. This concept has been applied to patients with congenitally corrected transposition. The method used for training is similar in the two groups. A pulmonary artery band is placed around the main pulmonary artery acutely, to raise the morphologic LV pressure to approximately 75% to 80% of the systemic pressure. Inotrope support may be necessary, and band adjustment to loosen or tighten the band may be needed over the first few days or weeks after the initial procedure. It may take 6 to 18 months for the morphologic left ventricle to be adequately trained so that systolic pressures are at systemic levels and ventricular function is good, with an adequate thickness of the LV free wall. Training of the morphologic left ventricle is generally more successful in younger patients, and the upper age limit at which success can be expected is probably 15 or 16 years.38

Tags: Sabiston and Spencers Surgery of the Chest Expert Consult
Jul 30, 2016 | Posted by admin in CARDIAC SURGERY | Comments Off on Surgery for Congenitally Corrected Transposition of the Great Arteries
Premium Wordpress Themes by UFO Themes
WordPress theme by UFO themes