A 65-year-old female presents for her annual physical examination, and on auscultation, her physician finds a right carotid bruit. She is on both an aspirin and a statin. She has known hypertension, controlled with a beta-blocker. There is no other relevant past medical or surgical history. On auscultation, her physician finds a right carotid bruit, which had been present on her exam last year. She is normotensive. There are no other relevant cardiovascular findings. She has a normal neurologic status. A carotid duplex exam was performed last year, which had demonstrated a 60% right carotid stenosis at the bulb with a normal homogeneous, highly echogenic plaque. Her current blood workup reveals a normal hematologic and biochemical panel. A lipid profile reveals a cholesterol level of 180 mg/dL and an LDL level of 90 mg/dL. Her HDL is 50 mg/dL, and her triglycerides are 130 mg/dL. Hemoglobin A1C is normal.

The differential diagnosis in this case for a carotid bruit is that of carotid disease or transmitted valvular disease. The presence of the carotid duplex from the previous year assists in the determination of the origin of the bruit. The absence of neurologic symptoms and signs strongly suggests that this lesion is asymptomatic. It should, however, be restudied to demonstrate stability.

A second scheduled carotid duplex exam is performed, which now demonstrates a greater than 90% right carotid stenosis at the bulb with a heterogeneous echolucent plaque (Fig. 1A and B). Due to the progression in stenosis and a change in plaque morphology, the patient is referred for evaluation by a vascular surgeon. The carotid duplex is reviewed, and it shows the bulb is in the mid-neck and accessible. A preoperative transcranial Doppler (TCD) is performed to risk stratify the plaque, and it reveals microemboli on the ipsilateral side. An echocardiogram shows no valvular disease and a normal ejection fraction with normal wall motion. EKG shows sinus rhythm. In light of the TCD findings, a noncontrast CT scan of the brain is performed and reveals no ischemic or embolic lesions. 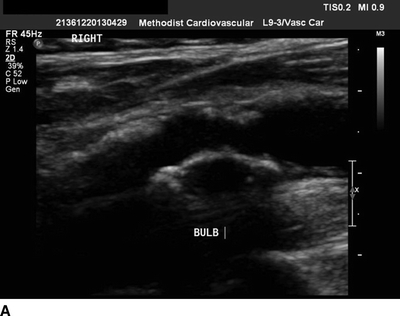 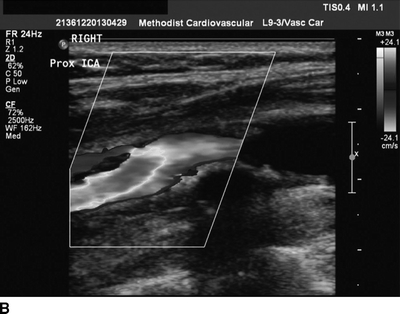 FIGURE 1 A gray-scale image (A) and color flow image (B) from carotid duplex demonstrating a greater than 90% right ICA stenosis with a heterogeneous plaque.

This is a morphologically high-risk asymptomatic progressive carotid lesion in a healthy 65-year-old female with no contraindications to intervention that has received proper preventative medical therapy.

The medical therapies appropriate to consider in these patients are antiplatelet, antihypertensive, antilipid, and in diabetics, angiotensin system inhibitors. All patients with diagnosed carotid disease have systemic atherosclerosis and benefit from maximal cardiovascular risk factor modification. In a symptomatic patient, clopidogrel or an equivalent should be administered in addition to acetylsalicylic acid (ASA). Naive patients should be started on statins as even a loading dose has been shown to have systemic benefits. Current national guidelines on antilipidemic, antihypertensive, and diabetic management should be followed. There is no evidence to support stopping any antiplatelet agent preoperatively, and all other medications should be continued to prevent rebound phenomena postoperatively. One caveat is insulin, which should be reduced commensurate with the fasting period.

Symptomatic disease should be treated within 1 month of presentation or earlier if the patient is neurologically stable. There is no good data to determine the timing of surgery for asymptomatic disease, but the 1-month rule appears appropriate to follow. Acute occlusion and crescendo Transient Ischemic Attacks (TIAs) accelerate the timing of surgery and need to be balanced against the neurologic condition of the patient.

TCD is not widely available, but its ability to differentiate high-risk lesions from low-risk lesions is significant in the preoperative period, and it represents a very good tool for intraoperative monitoring.

Use of CT Scan

Use of Follow-up Carotid Duplex

There are no well-defined algorithms for carotid duplex imaging postprocedure (carotid endarterectomy [CEA] or Carotid artery Stenting [CAS]). Postoperative duplex is used to follow the contralateral side if disease has been identified and to follow the ipsilateral side for restenosis and recurrent disease. A reasonable follow-up algorithm would be 1 month, 6 months, and yearly postoperatively moving to greater intervals after the second year.

Surgery is indicated because the patient has progressive stenosis despite adequate medical management and has microemboli on TCD. This represents a high-risk category of asymptomatic carotid stenosis. The patient does not match any physiologic or anatomic criteria for carotid artery stenting, and CEA is appropriate provided the provider has a stroke and perioperative event rate less than 3%. If the provider is enrolled in the Vascular Quality Initiative, this is readily available.

The patient should be sent to the preanesthesia assessment clinic to ensure clearance and avoid delays on the day of surgery. First case start allows for a more rapid discharge cycle for the uneventful CEA patient.

The patient may have either a cervical block or a general anesthetic. TCD on the middle cerebral artery (MCA) is used for cerebral monitoring. The patient is placed supine in 20-degree reverse Trendelenburg with the neck hyperextended and turned to the contralateral side. An ultrasound probe is used to determine the level of the bifurcation. A transverse incision is made on the neck with its midpoint based on the border of the sternocleidomastoid muscle (SCM). The internal jugular vein is retracted posteriorly. Dissection is carried out to mobilize and control the common carotid artery (CCA) followed by the external carotid artery (ECA) and the internal carotid artery (ICA). On reaching the carotid sheath, 1 to 2 mL of 1% lidocaine is injected into perivascular sheath to reduce the risk of bradycardia. The facial vein is ligated. Care is taken to identify and avoid the vagus nerve near the CCA (it may be anterior). As the ICA is dissected free, the patient is heparinized and care taken to mobilize and protect the hypoglossal nerve. Once all vessels are controlled, a shunt is identified and prepared. On confirmation of an Activated Clotting Time (ACT) over 250 seconds, clamping of the ICA, ECA, and CCA is performed. An arteriotomy is then performed and extended proximally and distally to gain access to a good lumen. At this stage, a shunt may be placed from ICA to CCA and flow confirmed by handheld Doppler.

Intraoperative TCD of the MCA flow will permit a quantification of the flow pre- and postclamping. A 50% reduction would suggest placement of a shunt. Using a Freer elevator, a dissection plane is developed in the proximal media, and all plaque is removed. Care is taken distally and when transition from the CCA to the ECA. End points are established and any debris removed. Fronds are removed tangentially. The distal end point is tacked with 7-0 Prolene sutures and the vessel patched with Dacron, Polytetrafluoroethylene (PTFE), or bovine pericardial patch material. Prior to final closure, the shunt, if present, is clamped and removed, and all vessels are vented. On closure, the ICA is released. Repair sutures are performed, and then, the ICA is occluded at its origin, and flows are reestablished from CCA to ECA and 30 seconds later to ICA. Any additional repair sutures are performed if required. Intraoperative imaging (duplex) is performed and heparin reversed with protamine to return the ACT to normal. The wound is closed over a drain after ensuring no venous bleeding during a Valsalva maneuver.

1.  High bifurcation: The bifurcation may be higher than anticipated and compromise the procedure. Preoperative or in room ultrasound to identify the level of the bifurcation can prevent this unexpected event.

2.  Bradycardia: Manipulation of the bifurcation can result in significant bradycardia. This event is preventable by injection of local anesthetic into the carotid sheath prior to full exposure or by placement of an esophageal pacer.

3.  Blood Pressure control: Unexpected hypo- and hypertension can occur generally due to anesthesia techniques, but persistent hypertension may result in postprocedure hematoma or signal an intracranial bleed.

4.  Patch or eversion: Both patch closure and eversion techniques are acceptable and superior to primary closure. If there is a problem doing the eversion technique or the end result is suboptimal, then conversion to a patch technique should be considered.

5.  Failure to anticoagulate: ACT should be checked after heparinization, and failure to heparinize in spite of adequate unit/kg dosing of heparin should raise the question of administration issues or antithrombin III deficiency.

6.  Abnormal coagulation: Appearance of white clot should raise the specter of Heparin-induced thrombocytopenia (HIT) and a HIT protocol should be followed.