The evaluation of pericardial disorders is of increasing importance in the management of patients with congenital heart disease. Previous cardiac surgery now accounts for over 25% of cases of constrictive pericarditis, and diagnosis can be challenging, especially in patients with congenital heart disease and coexisting myocardial dysfunction. This chapter will outline the echocardiographic evaluation of pericardial disorders, including the distinction between constrictive pericarditis and restrictive myocardial disease. 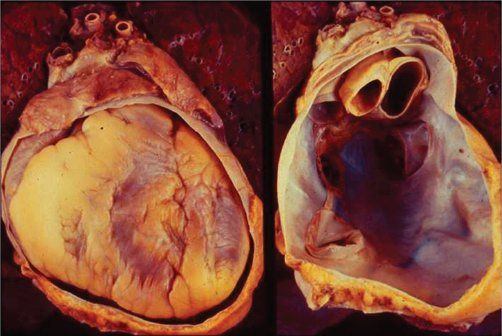 Figure 24.1. Pathology specimens demonstrating the double-layered pericardium with and without the heart in the fibrous pericardial cavity. (Courtesy of William Edwards, MD.)

The congenital absence of the pericardium usually involves the left side of the pericardium. Complete absence of the pericardium on the right side is uncommon. The defect is more frequent in males, and it rarely creates symptoms such as chest pain, dyspnea, or syncope. Because of the pericardial defect, cardiac motion is exaggerated, especially the posterior wall of the left ventricle. The entire cardiac structure is shifted to the left; hence, the right ventricular (RV) cavity appears enlarged from the standard parasternal windows, mimicking the RV volume overload pattern on echocardiography. The absence of pericardium should be considered when the right ventricle appears enlarged from the parasternal window and is at the center of the usual apical image (Fig. 24.2A). This condition is also associated with a high incidence of atrial septal defect, bicuspid aortic valve, and bronchogenic cysts. It is readily recognized because of its typical 2D echocardiographic features, and the diagnosis can be confirmed with computed tomography (CT) or magnetic resonance imaging (MRI) (Fig. 24.2B).

Figure 24.2. Patient with a congenitally absent pericardium. A: Two-dimensional still-frame obtained from the normal apical position. Because of the leftward shift of the heart, the right ventricle (RV) is at the center of the apical image rather than the left ventricular (LV) apex; this is often confused with RV volume overload. Cardiac catheterization was performed elsewhere to evaluate an atrial septal defect and showed no shunt before this evaluation. RA, right atrium; LA, left atrium. B: Magnetic resonance image of the chest showing a marked shift of the heart to the left side of the chest because of the partial absence of the pericardium on the left side. Arrows indicate area of absent pericardium.

A pericardial cyst typically is a benign structural abnormality of the pericardium that usually is detected as an incidental mass lesion on a chest radiograph or as a cystic mass on echocardiography (Fig. 24.3A). Most frequently, pericardial cysts are located in the right costophrenic angle, but they also are found in the left costophrenic angle, hilum, and superior mediastinum. Pericardial cysts need to be differentiated from malignant tumors, cardiac chamber enlargement, and diaphragmatic hernia. Two-dimensional echocardiography is useful in differentiating a pericardial cyst from other solid structures, because a cyst is filled with clear fluid and appears as an echo-free structure. It also has a characteristic appearance on CT or MRI (Fig. 24.3B).

When the potential pericardial space is filled with fluid or blood, it is detected as an echo-free space. When the amount of effusion is greater than 25 mL, an echo-free space persists throughout the cardiac cycle. A smaller amount of pericardial effusion may be detected as a posterior echo-free space that is present only during the systolic phase. As pericardial effusion increases, movement of the parietal pericardium decreases. When the amount of pericardial effusion is massive, the heart may have a “swinging” motion in the pericardial cavity (Fig. 24.4A), which is responsible for the electrocardiographic manifestation of cardiac tamponade, “electrical alternans” (Fig. 24.4B). The swinging motion is not always present in cardiac tamponade, however. Cardiac tamponade can occur with a small amount of pericardial effusion, if the accumulation of pericardial effusion happens rapidly. A clinical example is myocardial perforation after acute myocardial infarction or during implantation of a pacemaker. Various M-mode and 2D echocardiographic signs have been reported in this life-threatening condition: early diastolic collapse of the right ventricle, late diastolic right atrial (RA) inversion, abnormal ventricular septal motion, respiratory variation in ventricle chamber size (Fig. 24.5), and plethora of the inferior vena cava with blunted respiratory changes. These findings are caused by the characteristic hemodynamics of tamponade. Diastolic collapse of the right atrium and right ventricle is related to intrapericardial pressure rising above the intracardiac pressures, and abnormal ventricular septal motion is related to respiratory variation in ventricular filling. Diastolic collapse of the right heart may not occur if right heart pressure is elevated. In case of acute myocardial rupture or proximal aortic dissection, clotted blood may be seen in the pericardial sac; this finding is highly suggestive of hemopericardium (Fig. 24.6). When there is air in the pericardial sac (pneumopericardium) as a result of esophageal perforation, cardiac imaging (both transthoracic echocardiography (TTE) and TEE) is difficult because ultrasound does not penetrate air well.

The most effective treatment for cardiac tamponade is removal of the pericardial fluid. Although pericardiocentesis is lifesaving, a blind percutaneous attempt has a high rate of complications, including pneumothorax, puncture of the cardiac wall, or death. Two-dimensional echocardiography can guide pericardiocentesis by locating the optimal site of puncture (Fig. 24.10), by determining the depth of the pericardial effusion and the distance from the puncture site to the effusion, and by monitoring the results of the pericardiocentesis, usually from the subcostal view. The position of the pericardiocentesis needle can be checked by imaging with administration of agitated saline. Figure 24.11 demonstrates contrast (arrows) in the pericardial space, not in the right ventricle. Under most circumstances, a pigtail (6 or 7 French) catheter is introduced and left in the pericardial sac for several days with intermittent drainage (every 4 to 6 hours), which has markedly curtailed the rate of recurrent effusion and use of a sclerosing agent. At Mayo Clinic, most pericardiocentesis procedures are performed with the guidance of 2D echocardiography. The most common location of needle entry is in the parasternal area, but this depends on 2D echocardiographic findings. In our consecutive 1127 echo-guided pericardiocenteses, malignant effusion was most common (34%), followed by postoperative (25%), and complication of catheter-bases procedures (10%) (Fig. 24.12). The procedure was successful in 97%, and complications occurred in 4.4%, mostly minor. Major complications were death (1 patient), cardiac laceration (5), vessel laceration (1), pneumothorax (5), infection (1), and sustained ventricular tachycardia (1). 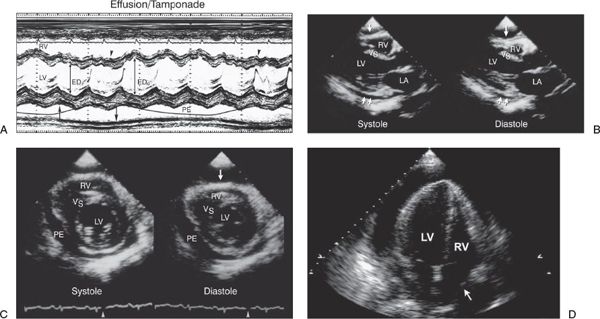 Figure 24.5. Pericardial effusion with tamponade. A: M-mode echocardiogram from the parasternal window in a patient with cardiac tamponade and large circumferential pericardial effusion (PE). The M-mode was recorded simultaneously with the respirometer tracing at the bottom (upward arrow indicates onset of inspiration and downward arrow indicates onset of expiration). The left ventricular (LV) dimension during inspiration (EDi) becomes smaller than with expiration (EDe). The opposite changes occur in the right ventricle (RV). The ventricular septum (arrowheads) moves toward the LV with inspiration and toward the RV with expiration, accounting for the abnormal ventricular septum in patients with cardiac tamponade. Parasternal long-axis (B) and short-axis (C) views of a patient with tamponade during systole and diastole. The pericardial effusion (double arrows in B; PE in C) appears small in the long axis and moderate in the short axis during systole, but during early diastole, the RV free wall collapses (arrow at top). VS, ventricular septum. D: Apical four-chamber view demonstrating late diastolic (arrowhead on electrocardiograph) collapse of right atrium (RA) wall (arrow). This sign is sensitive but not specific for tamponade. When RA inversion lasts longer than a third of the RR interval, it is specific for hemodynamically significant pericardial effusion.

Figure 24.6. Hemopericardium. A: This echocardiogram was obtained from a 73-year-old man who is septic with Streptococcus mitis and is hypotensive. There was a moderate amount of circumferential pericardial effusion with soft-tissue density (arrows) over the right ventricle (RV), characteristic for coagulate tamponade or hemopericardium. B: Soon after this echocardiogram, the patient died. Pathology showed hemopericardium (left) because of a perforation of the proximal aorta (arrow) with aortic valve endocarditis (right). 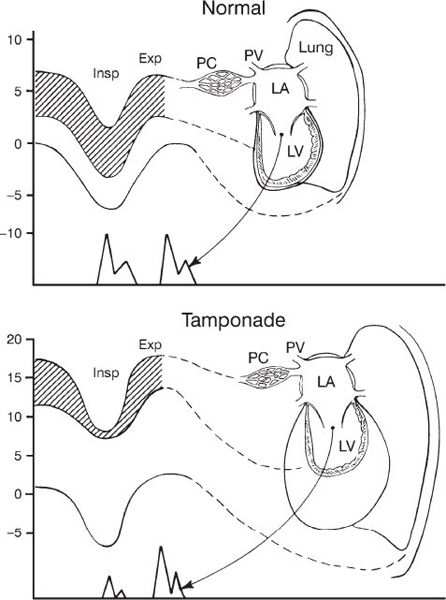 Figure 24.7. Diagram of intrathoracic and intracardiac pressure changes with respiration in normal and tamponade physiology. The shaded area indicates left ventricle (LV) filling pressure gradients (difference between pulmonary capillary wedge pressure and LV diastolic pressure). At the bottom of each drawing is a schematic mitral inflow Doppler velocity profile reflecting LV diastolic filling. In tamponade, there is a decrease in LV filling after inspiration (Insp) because the pressure decrease in the pericardium and LV cavity is smaller than the pressure fall in the pulmonary capillaries (PC). LV filling is restored after expiration (Exp). PV, pulmonary vein. (Modified from Sharp JT, Bunnell IL, Holland JF, et al. Hemodynamics during induced cardiac tamponade in man. Am J Med. 1960;29:640–646.) 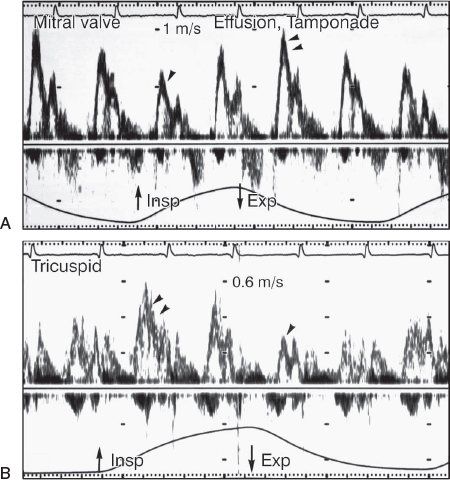 Pericardial calcification on chest radiography is helpful but is present in only 23% of cases (Fig. 24.18). Thickened pericardium is a usual finding in this condition, but pericardial thickness may be normal in up to 20% of cases. Pericardial thickness can be evaluated by echocardiography (most accurately by TEE) and by CT and MRI. In patients with congenital heart disease and univentricular physiology, the evaluation of pericardial thickness is of increased importance in suspected constrictive pericarditis, given the inability to evaluate interventricular hemodynamics. Traditional invasive hemodynamic features do have a large overlap with those found in restrictive cardiomyopathy or other myocardial diseases. New insights into the mechanism of constrictive pericarditis have allowed development of more reliable and specific diagnostic criteria for constriction using comprehensive echocardiography including 2D, Doppler, and tissue Doppler imaging. Subsequent to this observation, new diagnostic criteria of invasive hemodynamic features of constriction have been proposed. 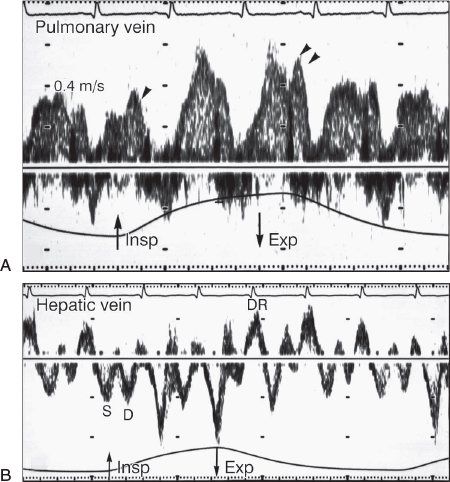 The M-mode (Fig. 24.19) and 2D echocardiographic features of constrictive pericarditis include thickened pericardium, abnormal ventricular septal motion, flattening of the LV posterior wall during diastole, respiratory variation in ventricular size, and a dilated inferior vena cava, but these findings are not sensitive or specific. Hatle et al. described the Doppler features typical of constriction, which are distinct from those of restrictive hemodynamics. Although the underlying pathologic mechanism is different from that of cardiac tamponade, the hemodynamic events of constriction in regard to respiratory variation in LV and RV filling are similar to those of tamponade.

To establish the diagnosis of constrictive pericarditis, the following two hemodynamic characteristics need to be demonstrated either by 2D/Doppler echocardiography or by cardiac catheterization:

1.Disassociation between intrathoracic and intracardiac pressures 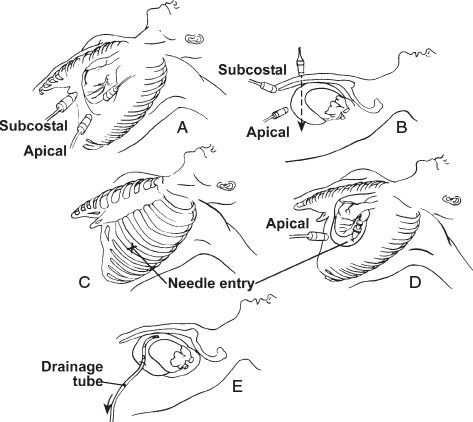 STEP 1. Locate an area on the chest or subcostal region from which the largest amount of pericardial effusion can be visualized, and mark it (A–C).

STEP 2. Determine the depth of effusion from the marked position and the optimal angulation.

STEP 4. When in doubt about the location of the needle, inject saline solution through the needle and image it from a remote site to locate the bubbles.