A 65-year-old man is referred for evaluation of celiac and hepatic artery aneurysms. His history dates back 1 year, at which time he underwent emergency operation for a ruptured splenic artery aneurysm. Operation included distal pancreatectomy, splenectomy, and ligation of the splenic artery. The patient currently has no symptoms from his aneurysms. He has not had fevers, weight loss, arthralgias, myalgias, hernia, joint swelling, laxity or dislocation, easy bruisability, visual changes, or lens dislocations, and has no family history of aneurysmal disease dissection, connective tissue disorders, or sudden death. He had a transient ischemic attack (TIA) 10 years ago presumably on the basis of hypertension. His only cardiovascular risk factor besides hypertension is hyperlipidemia. He has never had a myocardial infarction and has no pulmonary or renal problems.

CT imaging at the time of the splenic aneurysm rupture showed a celiac artery that measured approximately 20 mm in diameter. The common and proper hepatic arteries were normal. The left hepatic artery was diminutive. There was a focal dissection in the superior mesenteric artery.

On examination now, he is hypertensive with a blood pressure of 150/97 mm Hg. His heart rate is 69 beats per minute and regular. Examination of his neck, chest, heart, and abdomen is unremarkable. There are no abdominal masses or bruits. He has normal upper and lower extremity pulses, and there is no enlargement of the peripheral pulses.

The etiology of hepatic artery aneurysms has changed over the years. In the past, mycotic aneurysms were prevalent, whereas now, they are due to atherosclerosis, fibrodysplasia, vasculitis, polyarteritis nodosa, or systemic lupus erythematosus. Rarely, HAA has been seen in patients with Takayasu’s arteritis, Kawasaki’s disease, von Recklinghausen’s neurofibromatosis, and Wegener’s granulomatosis. HAA has been reported in patients with long-term oral amphetamine use and connective tissue disorders such as Marfan’s and Ehlers-Danlos syndromes, Osler-Weber-Rendu, and hereditary hemorrhagic telangiectasia.

The true incidence of HAA is unknown, but they represent between 10% and 20% of all visceral artery aneurysms. More HAA are being discovered because of the rise in cross-sectional imaging studies. HAA are defined as true or false aneurysms, the latter increasing in frequency because of the growth of minimally invasive diagnostic and therapeutic hepatobiliary procedures. Men are more commonly affected, and time of presentation is in the sixth decade of life. Most patients have aneurysms in an extrahepatic location (75% to 80%). HAA can be solitary or multiple.

The history does not support a diagnosis of vasculitis, so fibromuscular disease (FMD), segmental arterial mediolysis (SAM), or a connective tissue disorder are the most likely causes of the HAA. FMD and SAM can cause isolated spontaneous dissections of visceral, renal, or carotid arteries, which then can degenerate into aneurysms, sometimes rapidly. These dissections may involve more than one artery at the same presentation or occur at different time intervals.

Decisions for treatment should be based on the pathology of the splenic aneurysm, as it may provide clues as to the etiology of the HAAs; on whether the aneurysms are atherosclerotic or nonatherosclerotic; the size, location, growth rate, and rupture risk of the aneurysms; and the medical risk of the patient. The pathology report is sent, and the histologic analysis suggests medial dysplasia in the artery. The most likely etiology of these aneurysms based on this finding is FMD or SAM, the latter being on a continuum pathologically to FMD.

Imaging of the aneurysms has not been done for 1 year, so a new CT of the abdomen and pelvis is performed (Fig. 1). The celiac artery aneurysm has enlarged to 23 mm, and the common hepatic and proper hepatic arteries have become aneurysmal, measuring between 17 and 23 mm in diameter. The proper hepatic aneurysm is in the liver hilum. The right hepatic artery inside the hilar plate is 4 mm in diameter, but the remaining artery is of small caliber and irregular. The left hepatic artery is absent. There are two arteries near the base of the celiac that seem to supply the stomach. Other pertinent findings include a normal-size aorta, mildly dilated iliac arteries, mild dilatation of both renal arteries (8 to 9 mm in diameter), and a stable focal dissection of the superior mesenteric artery. There is no calcification within the walls of any of the aneurysms and no signs of periarterial inflammation, fluid, or air. 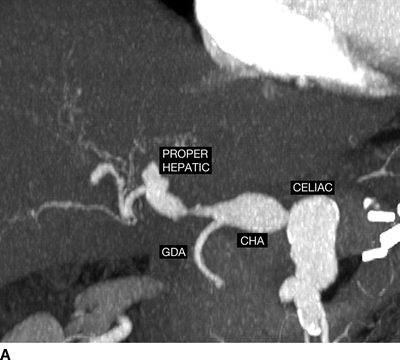 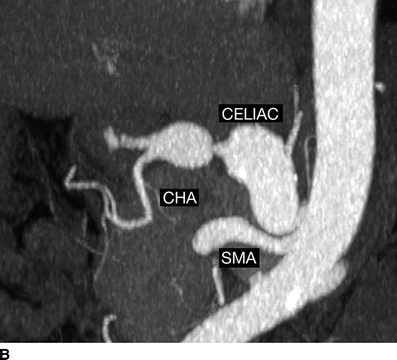 FIGURE 1 Select CT angiographic images of the patient are shown in (A and B). The proximal celiac artery was normal size, but the distal trunk was aneurysmal (23 mm). The common hepatic (CHA) and proper hepatic arteries had become aneurysmal in the past year (17 to 23 mm). The gastroduodenal (GDA) artery is patent, and the superior mesenteric artery (SMA) also is widely patent.

Rupture risk of HAA is poorly defined but seems to correlate with size and etiology. Although HAA is rare, and it is difficult to establish a relationship between rupture risk and size, most studies implicate a size greater than 20 mm in diameter as a predictor of rupture. In a large series from Mayo Clinic, the overall incidence of rupture was 14%, lower than other reports. However, of the nine patients who presented with rupture or symptomatic aneurysms, five had a nonatherosclerotic etiology, including fibromuscular dysplasia, polyarteritis nodosa, and infection. All five of these patients had aneurysm rupture, and some of the aneurysms were smaller than 2 cm. Importantly, mortality approaches 40% in patients with rupture. For these reasons, treatment is indicated for nonatherosclerotic or multiple HAA in most circumstances, regardless of size. Atherosclerotic HAA over 2 cm in diameter in good risk patients should be treated. For older asymptomatic patients in marginal health, with atherosclerotic aneurysms between 2 and 5 cm, treatment remains controversial.

The patient is found to be good risk, with normal cardiac, pulmonary, and renal function. The remote history of TIA may not seem important now, but patients with FMD or SAM can have either intracerebral aneurysms or carotid dissection. An MRI/MRA of the head and neck is unremarkable. Medical genetics evaluation is completed and testing shows no specific connective tissue disorder.

Since the etiology of the aneurysms is nonatherosclerotic, there has been new aneurysmal degeneration of the common and proper hepatic arteries since the previous CT, and the celiac and proximal hepatic artery aneurysm exceeds 20 mm, this patient requires treatment. Options for treatment are either open repair or endovascular therapy. Treatment by open repair in a good-risk patient can be done by ligation, resection, endoaneurysmorrhaphy, or reconstruction with a prosthetic or autogenous bypass or interposition graft. Arterial reconstruction with a graft requires an accessible and adequate-sized distal target artery, and a source of inflow. Figure 2 shows an example of such a reconstruction. Endovascular treatment can be done by coil occlusion, or placement of covered stents to exclude the aneurysm, provided the anatomy is appropriate. Durability of covered stents remains to be defined. 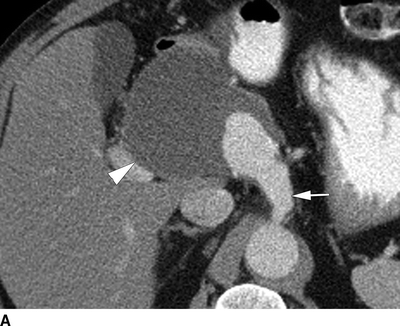 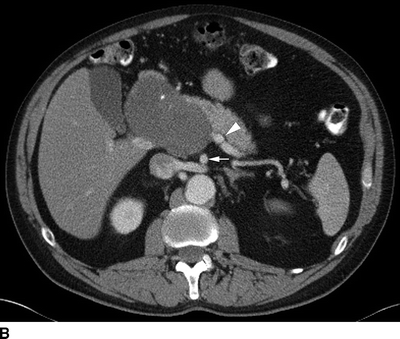 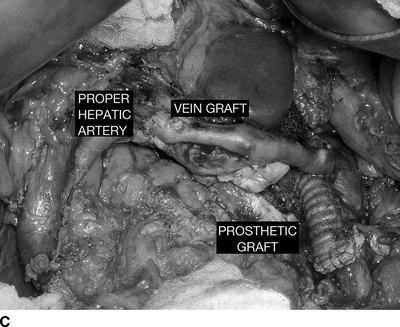 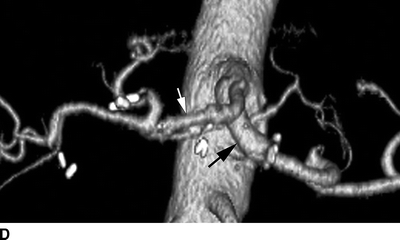 FIGURE 2 A patient with a huge common hepatic artery aneurysm (9 cm) as shown in the CT images (A,B). The proximal celiac artery is aneurysmal as shown by the arrow in (A). The arrow head shows the caudal extent of the aneurysm, compressing the portal vein. In (B), the splenic artery is normal sized (arrowhead ), and the superior mesenteric artery is widely patent (arrow). The patient was reconstructed with a prosthetic graft from the supraceliac aorta to the splenic artery. A reverse vein graft was placed to the proper hepatic artery, with a distal anastomosis of that graft done with interrupted suture (C). Postoperative CTA (D) shows a widely patent prosthetic graft to the splenic artery (black arrow ) and vein graft to the proper hepatic artery (white arrow). The right and left hepatic arteries are seen.