Describes the overall arrangement of the systemic circulation and identifies the primary functional properties of each of its major components.

Defines mean circulatory filling pressure and states the primary factors that determine it.

Defines venous return and explains how it is distinguished from cardiac output.

States the reason why cardiac output and venous return must be equal in the steady state.

Predicts the shifts in the venous return curve that occur with altered blood volume and altered venous tone.

Describes how the output of the left heart pump is matched to that of the right heart pump.

Draws the normal venous return and cardiac output curves on a graph and describes the significance of the point of curve intersection.

In previous chapters, we have primarily described how individual components in the cardiovascular system work. That is, we have tried to establish their fundamental individual “rules of operation.” (For example, a basic rule for the heart is CO = SV × HR, and a basic rule for any vessel is

) Such individual rules must be obeyed in all situations including those that exist within the intact cardiovascular system. However, in the intact cardiovascular system, the individual components are interconnected. An abnormal operation of any one component necessarily causes “ripple-effect” changes throughout the entire system that may seem abnormal. Such interactions are the subject of this chapter. They are of special importance to the clinician who must be able to distinguish between primary abnormalities and secondary consequences.

As illustrated in Figure 8–1, the cardiovascular system is a closed hydraulic circuit that includes the heart, arteries, arterioles, capillaries, and veins.1 The venous side of this system is often conceptually separated into two different compartments: (1) a large and diverse peripheral section (the peripheral venous compartment) and (2) a smaller intrathoracic section that includes the vena cavae and the right atrium (the central venous compartment). Each of the segments of this circuit has a distinctly different role to play in the overall operation of the system because of inherent differences in anatomical volume, resistance to flow, and compliance that are summarized in Table 8–1. 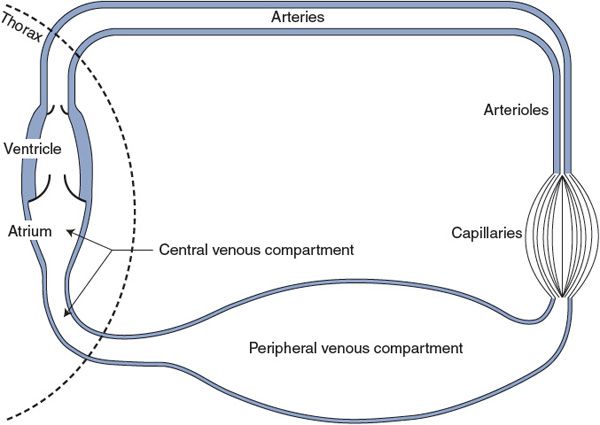 Table 8–1. Typical Properties of the Major Components of the Systemic Cardiovascular Circuit*

Note especially the surprisingly high ventricular diastolic compliance of 24 mL/mm Hg in Table 8–1. This value indicates how exquisitely sensitive the ventricular end-diastolic volume (and therefore stroke volume and cardiac output) is to small changes in cardiac filling pressure (ie, central venous pressure). In all physiological and pathological situations, cardiac filling pressure is a crucial factor that determines how well the cardiovascular system will be operating.

Imagine the heart arrested in diastole with no flow around the circuit shown in Figure 8–1. It will take a certain amount of blood just to fill the anatomical space contained by the systemic system without stretching any of its walls or developing any internal pressure. This amount is 3.56 L, as indicated by the total systemic circuit volume (V0) in Table 8–1. Normally, however, the systemic circuit contains approximately 4.5 L of blood and is thus somewhat inflated. From the total systemic circuit compliance (C) given in Table 8–1, one can see that an extra 1000 mL of blood would result in an internal pressure of approximately 7 mm Hg (ie, 1000 mL/140 mL/mm Hg). This theoretical pressure is called the mean circulatory filling pressure and is the actual pressure that would exist throughout the system in the absence of flow. The two major variables that affect mean circulatory filling pressure are the circulating blood volume and the state of the peripheral venous vessel tone. In the latter case, look at Figure 8–1 and imagine how constriction of the vessels of the large venous compartment (increasing venous tone) will significantly increase pressure throughout the system. In contrast, squeezing on arterioles (increasing arteriolar tone) will have a negligible effect on mean circulatory filling pressure because arterioles contain so little blood in any state. The other major components of the system (arteries and capillaries) essentially do not actively change their volume.

The presence of flow around the circuit does not change the total volume of blood in the system or the mean circulatory filling pressure. The flow caused by cardiac pumping action does, however, tend to shift some of the blood volume from the venous side of the circuit to the arterial side. This causes pressures on the arterial side to rise above the mean circulatory pressure, whereas pressures on the venous side fall below it. Because veins are approximately 50 times more compliant than arteries (Table 8–1), the flow-induced decrease in venous pressure is only approximately 1/50th as large as the accompanying increase in arterial pressure. Thus, flow or no flow, pressure in the peripheral venous compartment is normally quite close to the mean circulatory filling pressure.

The cardiovascular system must adjust its operation continually to meet changing metabolic demands of the body. Because the cardiovascular system is a closed hydraulic loop, adjustments in any one part of the circuit will have pressure, flow, and volume effects throughout the circuit. Because of the critical influence of cardiac filling on cardiovascular function, the remainder of this chapter focuses on the factors that determine the pressure in the central venous compartment. In addition, the way in which measures of central venous pressure can provide clinically useful information about the state of the circulatory system is discussed. 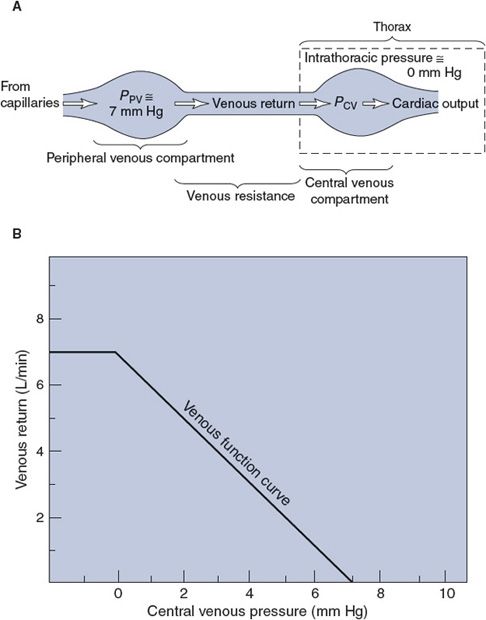 Figure 8–3. (A) Factors influencing venous return and (B) the venous function curve. 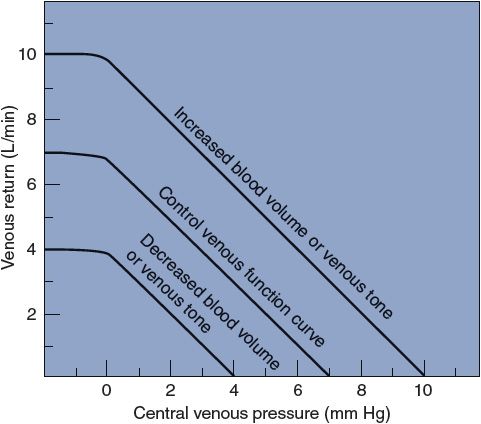 The significance of the fact that central venous pressure simultaneously affects both cardiac output and venous return can be best seen by plotting the cardiac function curve and the venous function curve on the same graph, as shown in Figure 8–5. 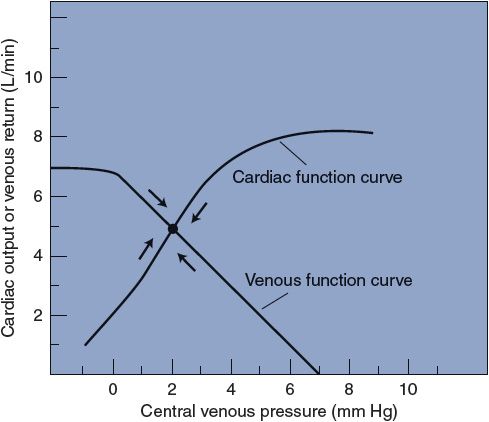 3. Increased output of the right side of the heart.

5. As long as this imbalance exists, blood accumulates in the pulmonary vasculature and raises pulmonary venous and left atrial pressures. 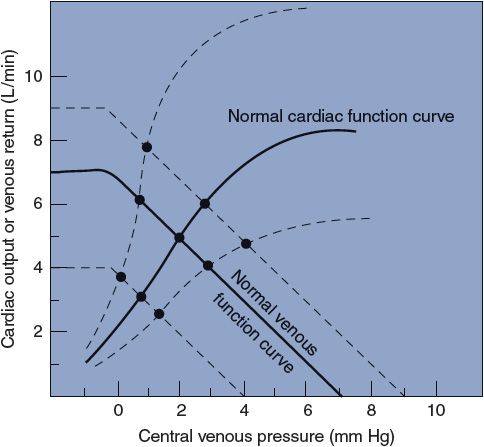 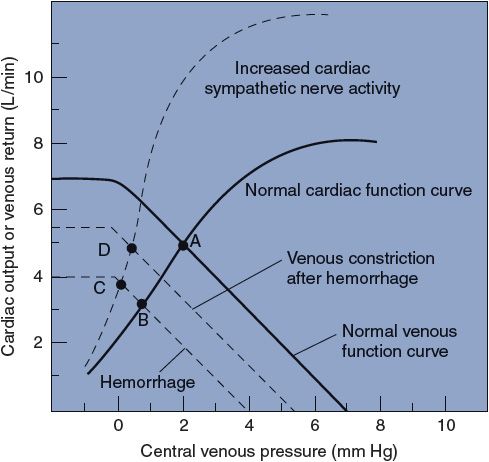 An additional compensatory mechanism evoked by blood loss is increased activity of the sympathetic nerves leading to veins. Recall that this raises peripheral venous pressure and causes a rightward shift of the venous function curve. Therefore, increased sympathetic activity to veins tends to shift the venous function curve, originally lowered by blood loss, back toward normal. As a consequence of the increased peripheral venous tone and the shift to a more normal venous function curve, the cardiovascular operation shifts from point C to point D in Figure 8–7. Thus, peripheral venous constriction increases cardiac output by raising central venous pressure and moving the heart’s operation upward along a fixed cardiac function curve. It must be pointed out that separating the response to hemorrhage into distinct, progressive steps (ie, A to B to C to D) is only a conceptualization for appreciating the individual effects of the different processes involved. In reality, the reflex venous and cardiac responses occur simultaneously and so quickly that they will easily keep up with the blood loss as it occurs. Thus, the actual course of a patient’s net response to hemorrhage would follow nearly a straight line from point A to point D.

In summary, point D illustrates that near-normal cardiac output can be sustained in the face of blood loss by the combined effect of peripheral and cardiac adjustments. Hemorrhage is only one of an almost infinite variety of disturbances to the cardiovascular system. Plots such as those shown in Figure 8–7 are very useful for understanding the many disturbances to the cardiovascular system and the ways in which they may be compensated.

Rough estimates of a patient’s central venous pressure can be obtained quite easily by observing the external jugular veins. Because the force of gravity tends to keep veins in the head and neck collapsed when an individual is in an upright position, there should be no distention (or retrograde pulsations from atrial contractions) in these neck veins. Conversely, when an individual is fully recumbent, the neck veins should be full and pulsations should be easily detected. If a healthy individual is placed in a semirecumbent position so that the external jugular veins are positioned at ~7 cm above the right atrium, the point between the collapsed venous segment and the filled segment can usually be visualized.6 Abnormally high central venous pressures will be associated with neck vein distention at a higher level (perhaps even when the patient is upright).

Because of its diagnostic value in critical care situations, central venous pressure is often monitored continuously via a catheter that is inserted in a peripheral vein and advanced centrally until its tip is in the central venous compartment (ie, near or in the right atrium). In some situations, it is desirable to assess left atrial pressure, which is the filling pressure for the left side of the heart. This is commonly done with a specialized flow-directed venous catheter that uses a small inflatable balloon at its tip to drag it with the blood flow through the right ventricle and pulmonic valve into the pulmonary artery. The balloon is then deflated and the cannula is advanced further until it wedges into a terminal branch of the pulmonary vasculature. The pulmonary wedge pressure recorded at this junction provides a useful estimate of left atrial pressure.

The junction of the venous side of the circulation with the heart is a critical site of functional integration between the heart and the vasculature. As previously stated, flow through the circulation depends upon the pressure difference across the circulation and the vascular resistance. A primary determinant of the arterial pressure is the cardiac output. The two determinants of the cardiac output are the heart rate and the stroke volume. A major determinant of the stroke volume is ventricular filling, which, as described in this chapter, is a function of the central venous pressure. Thus, we come back to strongly emphasize the original statement in this chapter that a change in any one variable will have ripple effects throughout the system and the alert clinician will have to discern the primary disturbances from secondary consequences.