Ebstein’s Anomaly in the Neonate

Medical treatment of the symptomatic neonate depends on the degree of hemodynamic stability. Patients who are reasonably stable are treated with supplemental oxygen and prostaglandin infusion and closely observed for adequacy of cardiac output and oxygen saturations. Treatment of unstable patients involves intubation and deep sedation (Fentanyl of 2–4 mcg/kg/h) and paralysis in addition to initiation of prostaglandins. Ventilation should be adjusted to decrease PVR. We use large tidal volumes (12–15 cc/kg) to offset the effects of gross cardiomegaly on lung expansion. Inhaled nitric oxide may be invaluable in reducing PVR. A continuous infusion of bicarbonates and inotropes (usually dopamine of 510 mcg/kg/h) may be necessary. Following a confirmation of diagnosis by echocardiogram, the clinical progress should be monitored closely. Daily echocardiograms are obtained looking specifically for enhanced antegrade pulmonary blood flow [4]. In our own experience as well as others, about half the neonates tend to stabilize and improve over a few days as PVR decreases [3, 7]. Serial echocardiograms will document increasing pulmonary blood flow. Prostaglandin infusion and ventilation are weaned gradually as tolerated.

Neonates who continue to decline in spite of standard resuscitative measures need surgical intervention as death is certain (Fig. 4.2). Those who respond to medical measures should be watched over a period of days to weeks. Prostaglandin should be weaned gradually as PVR drops and antegrade pulmonary blood flow increases. The child may be able to establish adequate RV output to be extubated and discharged home. If however the child does not tolerate weaning of prostaglandin (oxygen saturation below 80 %) or positive pressure ventilation, surgical intervention will become necessary [3, 7]. Those with anatomical pulmonary atresia will necessarily require surgery (Fig. 4.2). Generally if the GOSE score is 3 or 4, the patients will require some form of surgical intervention in the neonatal period [4]. It is also worth noting that among those who somewhat respond to medical intervention, the predominant symptom of right heart failure is difficulty in tolerating feeds secondary to mesenteric venous congestion. 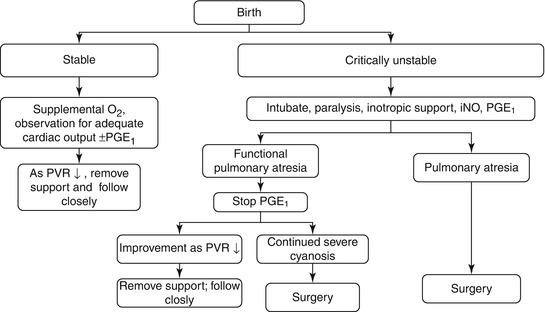 4.5.2.2 Evolution of Principles of Surgical Management

Although Wilhelm Ebstein first described the anomaly named after him in 1866, it was not until 1958 that an attempt at total correction was made by Hunter and Lillehei [12]. They attempted to create a competent valve by repositioning the displaced leaflets with no success. Later Hardy and colleagues modified the technique by placement of interrupted sutures over the spiral line of the displaced leaflets [13]. Although the technique yielded moderate success, it was not effective in the more severe forms of the disease. In 1963, Bernard and Schrire described successful replacement of the tricuspid valve using a mechanical prosthesis [14]. The anchoring sutures were placed cephalad to the coronary sinus and the atrioventricular node to avoid heart block. However, prosthetic valve replacement of the TV has yielded less than ideal results related to thrombosis of mechanical prosthesis in the tricuspid position and degradation of biological valves.
In 1979, Danielson described a new method of valve reconstruction [15]. Danielson and colleagues described the importance of plication of atrialized RV, posterior tricuspid annuloplasty, closure of ASD, and right reduction atrioplasty. In their series, all accessory pathways were mapped and divided. They described the first large series with satisfactory outcomes. Since then alternate techniques of repair have been described in adults and older children with variations in the theme of plication of the redundant atrialized RV and utilization of the sail-like anterior leaflet in construction of a competent monocuspid valve. Carpentier et al. described longitudinal plication of RV to preserve base to apex dimension of RV. The anterior leaflet is detached and reattached to the new annulus after clockwise rotation. A prosthetic ring was inserted to reinforce repair [5].
In 1997, Sebening described tricuspid valvuloplasty in EA using a single-stitch technique with satisfactory outcomes. This involved creation of a competent monocusp (the anterior leaflet) by transfer of anterior papillary muscle towards the interventricular septum (Fig. 4.3) [16]. 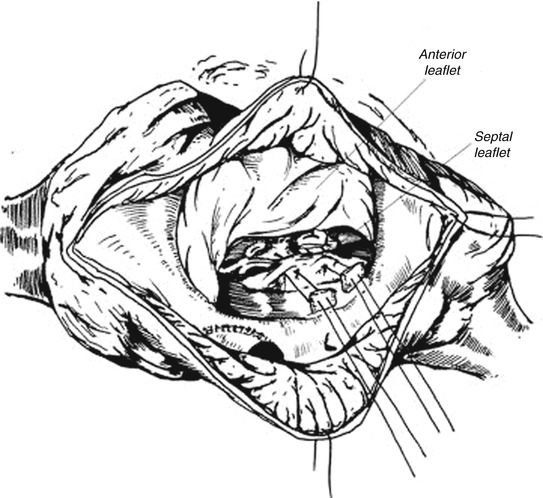 Sebening single-stitch valvuloplasty (papillary muscle of anterior leaflet through tethered septal leaflet) [6]
The concept of cone reconstruction was conceived by Dr. Jose Pedro, da Silva, and colleagues and is based on the principles of Carpentier techniques [17]. In this operation, the anterior and posterior leaflets of the tricuspid valve are mobilized from their anomalous attachments in the right ventricle, and the free edge of this complex is rotated clockwise to be sutured to the septal border of the anterior leaflet, thus creating a cone the vertex of which remains fixed at the RV apex and the base of which is sutured to the true TV annulus. Whenever possible the septal leaflet is incorporated into the cone. The atrialized RV is longitudinally plicated and the true TV annulus is plicated to match the proximal circumference of the already constructed cone-shaped valve. The ASD is closed in a valved fashion and the redundant RA is excised. In comparison to the Carpentier technique, the new cone-shaped valve opens to a central blood flow and closes with full cooptation of leaflets (360° of TV leaflet tissue guarding the right atrioventricular junction). Dr. Silva and his colleagues described their experience with this technique in 40 consecutive patients. Neonates were excluded from this study although this procedure has been used in neonates by other groups [3, 7, 18]. Dearani et al. at Mayo Clinic have subsequently described the largest series of the cone procedure with good results [18].
In 1991, Starnes et al. reported a single-ventricle palliation for severely ill neonates with good outcome [19]. This involved pericardial patch closure of the tricuspid valve orifice, atrial septectomy, and construction of a modified BT shunt. Pulmonary regurgitation was addressed by ligation of the main pulmonary artery, thus creating pulmonary atresia. The patients eventually underwent a Fontan operation. Later Sano et al. described a novel “RV exclusion” procedure based on single-ventricle physiology [20]. The main difference between Sano modification and Starnes’ single-ventricle palliation is that in the former a large portion of the RV free wall is excised. This restores normal movement of the interventricular septum and LV function. In 2006, Starnes et al. updated their results of single-ventricle palliation on 12 neonates with 66 % survival [21]. They also described two important modifications to their earlier technique. The coronary sinus was retained on the right atrial side of the tricuspid valve patch to prevent drainage into the excluded RV. More importantly the pericardial patch was fenestrated with a 4 mm opening to prevent distension of the RV, thereby preventing impingement of the left ventricle.
We first attempted a two-ventricle repair in three critically ill symptomatic neonates in 1994 and have subsequently applied this strategy to most neonates and young infants with EA requiring surgical intervention [6, 22–24].

4.6 Our Approach to EA in the Neonate

There continues to be considerable controversy over the choice of the right operation for a symptomatic neonate presenting with EA. As mentioned before we are heavily biased towards a biventricular repair [7]. In general, patients who demonstrate antegrade pulmonary blood flow (with measures like inhaled NO) and have a reasonable size RV are subjected to a biventricular repair.
Patients with pulmonary atresia seem to fall into two general groups. The first group consists of those with true anatomical obstruction of the main pulmonary artery (Fig. 4.4). These patients tend to be relatively stable on the ventilator, often with gross cardiomegaly, severe TR, and sometimes a dysplastic (rather than a true EA like) valve. The choice of operation for patients with anatomical pulmonary atresia is dictated by the size of the RV. Those with good size RV receive a biventricular repair. A competent right ventricular outflow tract in form of a RV to PA conduit is used when the tricuspid valve repair appears less than satisfactory. On the other hand if the reconstructed TV appears good, we tend to do a transannular repair sometimes with the addition of a monocusp valve. When the RV is small patients undergo a Starnes repair with placement of BT shunt followed subsequently by a Fontan or 1 and half ventricle repair [7]. 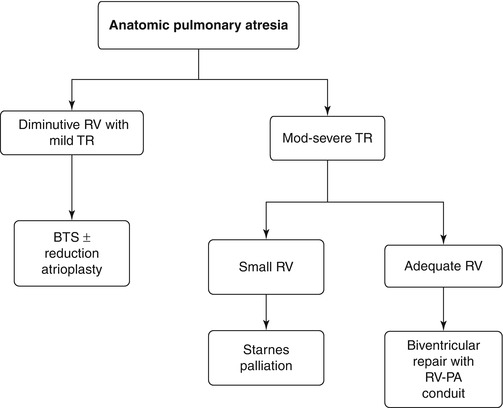 Tags: The Tricuspid Valve in Congenital Heart Disease
Feb 28, 2017 | Posted by admin in CARDIOLOGY | Comments Off on Ebstein’s Anomaly in the Neonate
Premium Wordpress Themes by UFO Themes
WordPress theme by UFO themes