MICHAEL B. BREWER and KAREN WOO

A 70-year-old female with a past medical history significant for hypertension and smoking presents with several episodes of transient left arm weakness. Each episode lasted several hours, consisted of weakness and numbness of the left arm and hand, and resolved completely. The patient also reports one instance of right eye blindness, described as a dark curtain being drawn down over her vision, which also completely resolved. She has no other medical problems, has no previous surgeries, and is on no medications. Physical examination is remarkable only for a right carotid bruit. She has no residual neurologic deficits, has no pulsatile masses, and has strong pulses throughout.

The patient’s symptoms are consistent with transient ischemic attack (TIA) and amaurosis fugax. These symptoms have a broad differential diagnosis and have a nonvascular cause in up to 30% of cases. For this reason, a careful and thorough history should be elicited, with a focus on cerebrovascular disease and its risk factors. While atherosclerotic disease of the carotid arteries (primarily the internal) is the most likely etiology, the differential should include cardiac embolic phenomena, extracranial carotid artery aneurysm (ECAA) or dissection, arteritis (due to medications, irradiation, infection, or trauma), sympathomimetic drugs (e.g., cocaine), and fibromuscular dysplasia. Systemic illnesses, such as hypercoagulability or Marfan’s syndrome, should be considered as well.

Duplex ultrasound is the initial imaging modality of choice, as it is simple, readily available, noninvasive, and well established. Its limitations include an inability to identify high lesions and overestimation of degree of stenosis in the presence of a contralateral carotid artery occlusion.

A bilateral carotid duplex is ordered. An image from the right carotid is shown in Figure 1. 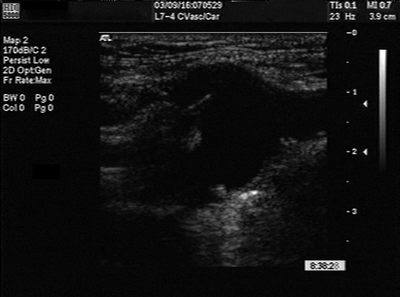 Traditionally, carotid arteriography has been the gold standard for evaluation of ECAAs. However, this convention is shifting with the increasing availability and diagnostic accuracy of computed tomographic angiography (CTA) and magnetic resonance angiography (MRA). CTA allows for visualization of the carotid artery, the aneurysm wall, and any associated thrombus or calcification. Additionally, it can reveal other surrounding neck pathology and allows for orientation with other anatomic landmarks with three-dimensional reconstruction. CTA provides the additional benefit of avoiding the invasiveness, access complications, and 1% stroke risk associated with carotid arteriography. Most surgeons would proceed to CTA as the next necessary preoperative step in the evaluation of ECAA. A carotid arteriogram is shown in Figure 2, with a corresponding CTA shown in Figure 3. 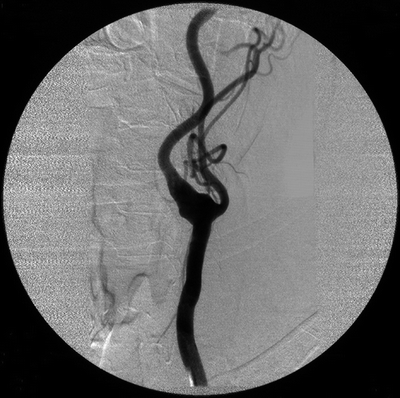 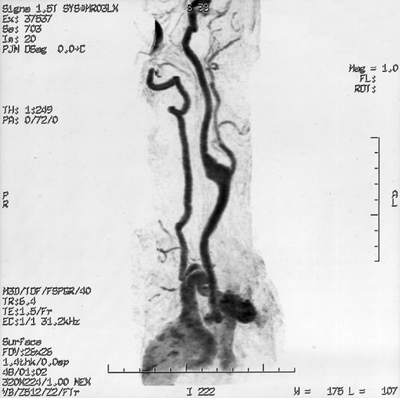 Angiography confirms the diagnosis and demonstrates a right ECAA involving the right ICA. The lesion is well removed from the petrous portion of the ICA, and there is no evidence of fibrodysplasia. Both the angiogram and CTA provide quality images with similar information.

The patient is diagnosed with an ECAA, which, left untreated, carries a poor prognosis with stroke and death rates approaching 50%. For this reason, the presence of an ECAA is an indication for operative repair, and size >2 cm is an absolute indication. One could argue, however, that in poor operative candidates or patients with small, incidental, asymptomatic aneurysms, observation with serial duplex scans and antiplatelet therapy could be employed. In these cases, aneurysm growth or the development of symptoms would be indications to intervene.

The conventional operative approach is open surgical repair; however, more and more authors are describing good results with endovascular deployment of covered stent grafts. As these lesions are extremely rare, the approach will most likely depend on surgeon experience.

ECAAs are rare, representing 0.4% to 4% of all peripheral aneurysms. Most tertiary centers treat fewer than 1 per year, and most reports in the literature are small case series spanning decades. Like most aneurysms, an ECAA is defined as a localized area of increased artery caliber of 50% over that of normal adjacent artery or reference values (ICA: 0.55 cm male, 0.49 cm female; carotid bulb: 0.99 cm male, 0.92 cm female). Unlike other aneurysms, ECAAs are not associated with aneurysms of other anatomical locations. There is a 15% to 20% incidence of carotid aneurysm on the contralateral side. ECCAs are 2.5 times more common in males, occur at an earlier age than carotid occlusive disease (53 to 56 years), and are frequently associated with hypertension (62%).

The most common presentation of ECAAs is related to thromboemboli, followed by mass effect, as rupture is rare. Sixty-seven percent present with TIA, 33% report amaurosis fugax, 21% have nonhemispheric symptoms (blurry vision or equilibrium disturbance), and 8% present with stroke. Presenting symptoms from mass effect include palpable pulsatile mass, dysphagia, or cranial nerve dysfunction. Many ECAAs are asymptomatic and found incidentally on CT scans done for other reasons or on routine surveillance carotid duplex.

Historically, ECAAs were most commonly due to peritonsillar infection. Currently, most series report atherosclerosis as the most common etiology. Postoperative pseudoaneurysms are also relatively common but represent a different clinical entity that is treated in much the same fashion. Less common causes of ECAAs include trauma, dissection, dysplasia, and infection. Regardless of cause, the most common location is the carotid bulb (95%) with extension into the proximal ICA. Extension into the carotid siphon can occur, highlighting the importance of preoperative imaging.

Until the 1970s, operative management of ECAAs was carotid artery ligation and was associated with a mortality of approximately 30%. More recent data suggest a lower mortality rate with ligation (11% to 12%). However, operative management has evolved significantly since that time, and preservation of internal carotid continuity is considered essential. Current operative strategies range from complete carotid reconstruction with autogenous vein graft to simple aneurysmorrhaphy. Other options include synthetic graft reconstruction, external carotid artery (ECA) to ICA transposition, aneurysmorrhaphy with patch angioplasty (using Dacron or bovine pericardium), and resection with primary end-to-end anastomosis or graft interposition. Combined major stroke and mortality rates for these procedures are generally accepted as 9% (3% to 20%).

Endovascular therapy consists of carotid angiography, followed by placement of a covered stent graft across the aneurysm. Depending on the location of the aneurysm, coil embolization of the ECA may be required to prevent type II endoleak. Endovasular repair is associated with fewer cranial nerve injuries and shorter recovery time than open surgical repair. Hybrid procedures consisting of open ECCA repair, followed by endovascular repair of a separate, more cephalad carotid aneurysm, have also been described.

The patient’s risk factors for anesthesia and surgery are minimal. Informed consent is obtained, and she is started on antiplatelet therapy with aspirin. She is then taken for elective open repair of her carotid aneurysm.

The goal of surgical treatment is resection of the aneurysm with restoration of arterial continuity, while simultaneously avoiding neurologic complications due to thrombosis or embolism. The operative approach to ECAA repair is similar to that of elective carotid endarterectomy. General endotracheal anesthesia is recommended because these procedures may be complex and have a protracted duration. The patient is positioned on a shoulder roll with adequate neck extension and rotation. The neck, upper chest, and groin (if the saphenous vein is to be used as a conduit or patch) are prepared and draped in standard sterile fashion. A cervical incision is made along the anterior border of the sternocleidomastoid muscle at the level of the carotid bifurcation. The platysma muscle is divided using electrocautery, and the carotid sheath is entered. The internal jugular vein is reflected laterally, and the facial vein is ligated. The ECAA is then exposed with minimal manipulation to avoid causing emboli. The posterior belly of the digastric muscle and the omohyoid muscle can be mobilized and, if necessary, divided to facilitate atraumatic dissection of the carotid. Care is taken to preserve the vagus and hypoglossal nerves, which may adhere to the aneurysm and can easily be injured. Once dissection is satisfactory, systemic heparin is administered. The CCA proximally and the ICA distally are controlled with vascular clamps. If the distal extent of the aneurysm is high and not amenable to clamping, intraluminal balloon occlusion devices may be used. The ECA is routinely ligated at this point, with the potential for reimplantation if collateral circulation is inadequate. Intraluminal shunts may be used selectively if there are signs of impaired intracranial collateral blood flow, if the patient has had a prior stroke, or universally depending on surgeon preference. The aneurysm is then resected, and an end-to-end carotid-carotid interposition graft with spatulation of the distal ICA anastomosis is created. Reversed saphenous vein is generally the preferred conduit, but synthetic graft may be used with good results if vein is limited (Table 1).