Atrial flutter can best be distinguished from atrial tachycardia in that atrial flutter is a reentrant circuit, whereas atrial tachycardia is focal. During atrial flutter, the electrical signal in the atrium traverses around in a fixed circuit. The circuit can involve the entire right or left atrium or just part(s) of the atrium. In contrast, an atrial tachycardia originates from a focal source in the atrium, i.e., a group of cells firing off abnormal electrical activity. Atrial flutter can be distinguished from atrial fibrillation (AF) by the organization of the flutter circuit within the atria. The circuit leading to atrial flutter often is well organized, meaning that the path of the circuit is the same with each flutter cycle length, and it repeats itself over and over again. Occasionally, atrial flutter can involve more than one stable circuit. Atrial flutter is distinguished from AF in that AF is a much more disorganized atrial arrhythmia. There is no stable circuit in fibrillation. In AF, the signals in the atria are often crashing into themselves or into each other.
In order for a reentering impulse to be continually repetitive as in “Typical” or “Type I” atrial flutter, it needs to be a stable circuit. The stability of the circuit is attributed to the presence of an excitable gap, where the heart tissue trailing the traversing impulse has recovered from refractoriness and is able to be excited again. In addition, there is an area of slow conduction within the circuit. These conditions fulfill the two requirements for impulse reentry (1. different impulse travel speeds or conduction velocities in two pathways where the electrical signals can go through; 2. differential refractoriness of the tissues in these two pathways). The areas of slow conduction can be a result of anatomic variations (variable patterns in cell alignment, the so called “anisotropy”, or anatomic structures that are more fibrous and less conducting) or as a result of scar from inflammation, surgery or stretch. In patients who present with the most commonly encountered atrial flutter (“typical atrial flutter”), this area of slow conduction coincides with the region between the tricuspid valve and the inferior vena cava and bordered by the Eustachian ridge (see Fig. 5.2). This is often referred to as the “cavo-tricuspid isthmus” because it forms a bridge of tissue through which the circuit is sustained. These slow conduction areas often become targets for ablation where if the reentering circuit can be interrupted or cut permanently, then the atrial flutter can be considered cured. This can be achieved with ablation through the circuit resulting in complete conduction block across the isthmus. 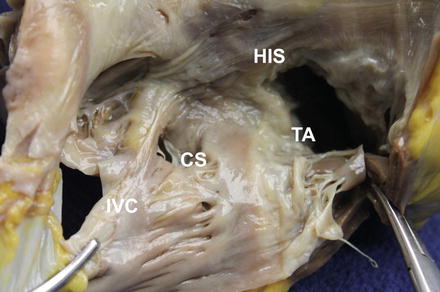 RA anatomy for typical atrial flutter. IVC inferior vena cava, CS coronary sinus, TA tricuspid annulus, His bundle of His
The traditional classification of “Atypical” or “Type II” atrial flutter had involved circuits other than the one traveling through the cavo-tricuspid isthmus. With better mapping techniques and improved understanding, these “atypical” atrial flutters have now been defined further. Atypical atrial flutter can involve either the right or the left atrium. It is now well know that ablations in the left atrium, particularly for atrial fibrillation, can result in atrial flutter as an unintended outcome of the ablation procedure. During an ablation for AF, linear ablation lesions create barriers in the left atrium to isolate the areas where fibrillation originates. These barriers, if not contiguous, can have gaps in the line or create areas of slow conduction. This can in turn set up conditions needed for flutter circuits in the left atrium. Some of more commonly encountered circuits, the “roof-dependent” flutters, involve circuits traveling around the right or left pulmonary veins (Fig. 5.3). Another commonly occurring atrial flutter travels around the mitral annulus using the gap between the left inferior pulmonary vein and the mitral annulus (or the so-called left atrial isthmus) (Fig. 5.4). 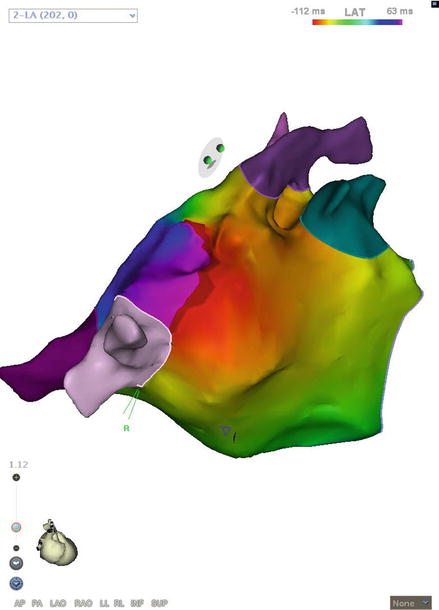 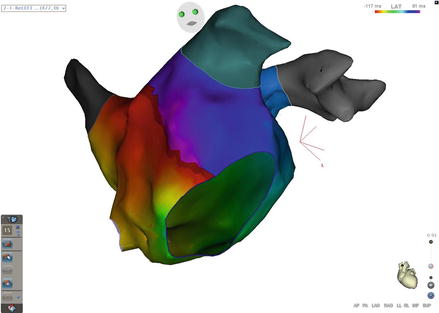 Mitral Isthmus flutter. The entire cycle length of the tachycardia can be found around the mitral annulus
Scarring from inflammation, surgery or ischemia/infarct can also create conditions leading to barriers within the atrial tissue that, in turn, set up the atrium for flutter circuits. Complex circuits have been mapped and reported which lead to another variant of “atypical” atrial flutter. Most atrial flutters involve a single circuit, but there may be multiple circuits involved. One such two-circuit or “dual-loop” example that has been reported involves one circuit that participates in a “typical flutter” fashion, going through the cavo-tricuspid isthmus, and at the same time a secondary circuit going through a scar area on the more lateral aspect of the right atrium. These circuits traverse through the atrium together in a “figure of 8” pattern, facilitating and sustaining one another (Fig. 5.5, Media 3–4). When multiple circuits are involved, there often is a coordinated activation around these circuits, meaning that the signals travel through these circuits at a fixed rate from beat to beat, thus creating a stable flutter. For these more complex flutters, ablation may be needed across multiple circuits in order to terminate the atrial flutter and convert to normal sinus rhythm, as well as to prevent further recurrences of signals traveling around either one of the circuits.

Many options are available for the treatment of atrial flutter, and treatment should be tailored to individual patient needs and circumstances. These can range from cautious monitoring to invasive therapy with catheter ablation. As atrial flutter is a non-life-threatening arrhythmic condition, symptomatic control is often the primary goal for therapy. Other important reasons for treating atrial flutter also include reducing the risk of tachycardia-mediated cardiomyopathy and minimizing recurrent heart failure exacerbation.
In general, the goals in managing atrial flutter include: control of ventricular rates during atrial flutter, restoration of regular sinus rhythm, and prevention of thromboembolic events. A wide variety of drugs can be utilized for medical therapy, such as beta blockers or calcium channel blockers that control the ventricular response rate, membrane active antiarrhythmic drugs such as propafenone, flecainide or ibutilide to restore sinus rhythm, and anticoagulants such as warfarin or dabigatran to reduce the risks of embolic events such as stroke.
Catheter based therapy has now become accepted as another first line treatment for patients with atrial flutter, especially ones with “typical” or “type I” variant. It offers a potential curative option and much improved long-term maintenance of sinus rhythm as compared with medical therapy [4]. The technical aspects of ablation have been discussed in section “Technical considerations”. The primary aim in ablation for atrial flutter is to interrupt the reentrant circuit permanently. Thus the main strategy in mapping atrial flutter is to locate an isthmus (narrow ridge) of tissue where the electrical impulse in the atrium travels through two electrically inactive boundary areas, such as anatomical structures like the tricuspid valve and the inferior vena cava, or scars. The goal of the ablation needs to be more than the restoration of sinus mechanism. To achieve electrical conduction block across the critical isthmus of the flutter circuit completely is regarded as the successful endpoint. It’s important not only that the arrhythmia stop, but that it can never come back.
In patients with atypical flutter that is refractory to conventional curative ablation and medical therapy, ablation of the atrioventricular node is another strategy that can be used to treat patients with atrial flutter. This ablation will induce significant bradycardia, and a pacemaker will be needed to maintain an adequate heart rate. Pacing usually involves single right ventricular lead stimulation. Alternatively, biventricular pacing devices have been used which may improve long term hemodynamic response in patients and lower incidence of heart failure.
Prevention of thromboembolic events with anticoagulation therapy is another main objective in the treatment of patients with atrial flutter. For patients assessed to be at risk, such as those with heart failure, structural heart disease, older age, and prior stroke or transient ischemic attacks, therapy with anticoagulants is recommended. Warfarin has been a mainstay medication traditionally. Newer antithrombin agents such as dabigatran and rivaroxaban have been demonstrated to be effective alternatives.
< div class='tao-gold-member'>
Only gold members can continue reading. Log In or Register to continue