Approach to the Patient with Possible Cardiovascular Disease

APPROACH TO THE PATIENT WITH POSSIBLE CARDIOVASCULAR DISEASE

THE MAGNITUDE OF THE PROBLEM

Cardiovascular diseases comprise the most prevalent serious disorders in industrialized nations and are a rapidly growing problem in developing nations (Chap. 2). Age-adjusted death rates for coronary heart disease have declined by two-thirds in the last four decades in the United States, reflecting the identification and reduction of risk factors as well as improved treatments and interventions for the management of coronary artery disease, arrhythmias, and heart failure. Nonetheless, cardiovascular diseases remain the most common causes of death, responsible for 35% of all deaths, almost 1 million deaths each year. Approximately one-fourth of these deaths are sudden. In addition, cardiovascular diseases are highly prevalent, diagnosed in 80 million adults, or ~35% of the adult population. The growing prevalence of obesity, type 2 diabetes mellitus, and metabolic syndrome (Chap. 32), which are important risk factors for atherosclerosis, now threatens to reverse the progress that has been made in the age-adjusted reduction in the mortality rate of coronary heart disease.

The symptoms caused by heart disease result most commonly from myocardial ischemia, disturbance of the contraction and/or relaxation of the myocardium, obstruction to blood flow, or an abnormal cardiac rhythm or rate. Ischemia, which is caused by an imbalance between the heart’s oxygen supply and demand, is manifest most frequently as chest discomfort (Chap. 4), whereas reduction of the pumping ability of the heart commonly leads to fatigue and elevated intravascular pressure upstream of the failing ventricle. The latter results in abnormal fluid accumulation, with peripheral edema (Chap. 7) or pulmonary congestion and dyspnea (Chap. 5). Obstruction to blood flow, as occurs in valvular stenosis, can cause symptoms resembling those of myocardial failure (Chap. 17). Cardiac arrhythmias often develop suddenly, and the resulting symptoms and signs—palpitations (Chap. 8), dyspnea, hypotension, and syncope—generally occur abruptly and may disappear as rapidly as they develop.

Although dyspnea, chest discomfort, edema, and syncope are cardinal manifestations of cardiac disease, they occur in other conditions as well. Thus, dyspnea is observed in disorders as diverse as pulmonary disease, marked obesity, and anxiety (Chap. 5). Similarly, chest discomfort may result from a variety of noncardiac and cardiac causes other than myocardial ischemia (Chap. 4). Edema, an important finding in untreated or inadequately treated heart failure, also may occur with primary renal disease and in hepatic cirrhosis (Chap. 7). Syncope occurs not only with serious cardiac arrhythmias but in a number of neurologic conditions as well. Whether heart disease is responsible for these symptoms frequently can be determined by carrying out a careful clinical examination (Chap. 9), supplemented by noninvasive testing using electrocardiography at rest and during exercise (Chap. 11), echocardiography, roentgenography, and other forms of myocardial imaging (Chap. 12).

Myocardial or coronary function that may be adequate at rest may be insufficient during exertion. Thus, dyspnea and/or chest discomfort that appear during activity are characteristic of patients with heart disease, whereas the opposite pattern, i.e., the appearance of these symptoms at rest and their remission during exertion, is rarely observed in such patients. It is important, therefore, to question the patient carefully about the relation of symptoms to exertion.

Many patients with cardiovascular disease may be asymptomatic both at rest and during exertion but may present with an abnormal physical finding such as a heart murmur, elevated arterial pressure, or an abnormality of the electrocardiogram (ECG) or the cardiac silhouette on the chest roentgenogram or other imaging test. It is important to assess the global risk of CAD in asymptomatic individuals, using a combination of clinical assessment and measurement of cholesterol and its fractions, as well as other biomarkers, such as C-reactive protein, in some patients (Chap. 30). Since the first clinical manifestation of CAD may be catastrophic—sudden cardiac death, acute myocardial infarction, or stroke in previous asymptomatic persons—it is mandatory to identify those at high risk of such events and institute further testing and preventive measures.

As outlined by the New York Heart Association (NYHA), the elements of a complete cardiac diagnosis include the systematic consideration of the following:

1. The underlying etiology. Is the disease congenital, hypertensive, ischemic, or inflammatory in origin?

2. The anatomical abnormalities. Which chambers are involved? Are they hypertrophied, dilated, or both? Which valves are affected? Are they regurgitant and/or stenotic? Is there pericardial involvement? Has there been a myocardial infarction?

3. The physiological disturbances. Is an arrhythmia present? Is there evidence of congestive heart failure or myocardial ischemia? 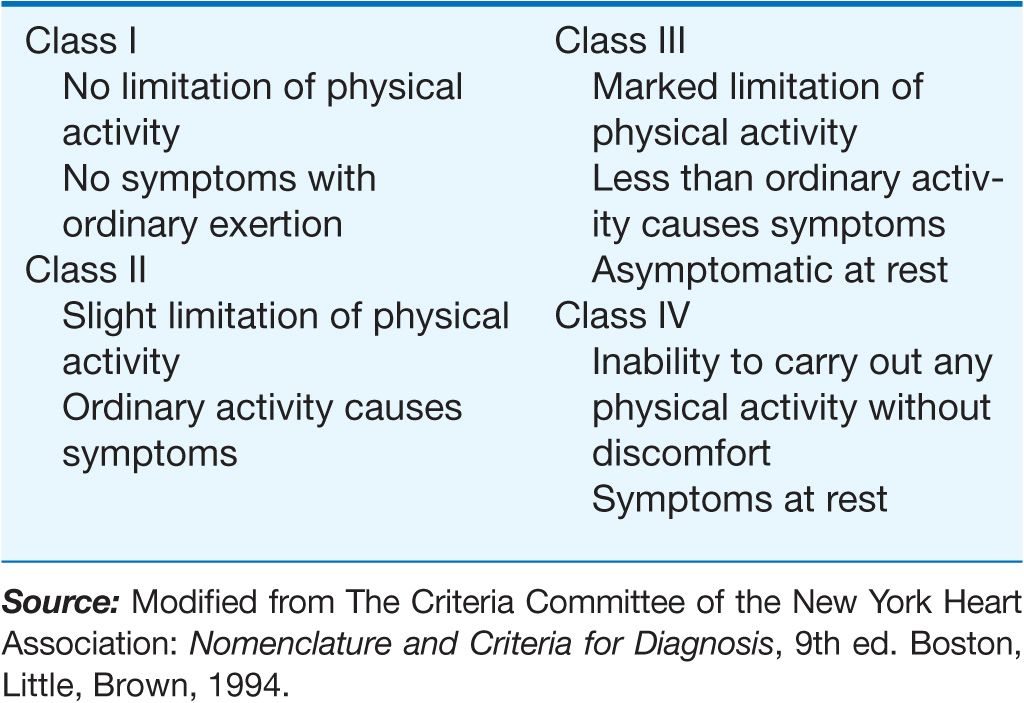 One example may serve to illustrate the importance of establishing a complete diagnosis. In a patient who presents with exertional chest discomfort, the identification of myocardial ischemia as the etiology is of great clinical importance. However, the simple recognition of ischemia is insufficient to formulate a therapeutic strategy or prognosis until the underlying anatomical abnormalities responsible for the myocardial ischemia, e.g., coronary atherosclerosis or aortic stenosis, are identified and a judgment is made about whether other physiologic disturbances that cause an imbalance between myocardial oxygen supply and demand, such as severe anemia, thyrotoxicosis, or supraventricular tachycardia, play contributory roles. Finally, the severity of the disability should govern the extent and tempo of the workup and strongly influence the therapeutic strategy that is selected.

In eliciting the history of a patient with known or suspected cardiovascular disease, particular attention should be directed to the family history. Familial clustering is common in many forms of heart disease. Mendelian transmission of single-gene defects may occur, as in hypertrophic cardiomyopathy (Chap. 21), Marfan syndrome, and sudden death associated with a prolonged QT syndrome (Chap. 16). Premature coronary disease and essential hypertension, type 2 diabetes mellitus, and hyperlipidemia (the most important risk factors for coronary artery disease) are usually polygenic disorders. Although familial transmission may be less obvious than in the monogenic disorders, it is helpful in assessing risk and prognosis in polygenic disorders. Familial clustering of cardiovascular diseases not only may occur on a genetic basis but also may be related to familial dietary or behavior patterns such as excessive ingestion of salt or calories and cigarette smoking.

When an attempt is made to determine the severity of functional impairment in a patient with heart disease, it is helpful to ascertain the level of activity and the rate at which it is performed before symptoms develop. Thus, it is not sufficient to state that the patient complains of dyspnea. The breathlessness that occurs after running up two long flights of stairs denotes far less functional impairment than do similar symptoms that occur after taking a few steps on level ground. Also, the degree of customary physical activity at work and during recreation should be considered. The development of two-flight dyspnea in a well-conditioned marathon runner may be far more significant than the development of one-flight dyspnea in a previously sedentary person. The history should include a detailed consideration of the patient’s therapeutic regimen. For example, the persistence or development of edema, breathlessness, and other manifestations of heart failure in a patient who is receiving optimal doses of diuretics and other therapies for heart failure (Chap. 17) is far graver than are similar manifestations in the absence of treatment. Similarly, the presence of angina pectoris despite treatment with optimal doses of multiple anti-anginal drugs (Chap. 33) is more serious than it is in a patient on no therapy. In an effort to determine the progression of symptoms, and thus the severity of the underlying illness, it may be useful to ascertain what, if any, specific tasks the patient could have carried out 6 months or 1 year earlier that he or she cannot carry out at present.

(See also Chap. 11) Although an ECG usually should be recorded in patients with known or suspected heart disease, with the exception of the identification of arrhythmias, conduction abnormalities, ventricular hypertrophy, and acute myocardial infarction, it generally does not establish a specific diagnosis. The range of normal electrocardiographic findings is wide, and the tracing can be affected significantly by many noncardiac factors, such as age, body habitus, and serum electrolyte concentrations. In general, electrocardiographic changes should be interpreted in the context of other abnormal cardiovascular findings.

ASSESSMENT OF THE PATIENT WITH A HEART MURMUR

(Fig. 3-1) The cause of a heart murmur can often be readily elucidated from a systematic evaluation of its major attributes: timing, duration, intensity, quality, frequency, configuration, location, and radiation when considered in the light of the history, general physical examination, and other features of the cardiac examination, as described in Chap. 9.