Cardiomyopathy is defined as an intrinsic abnormality in systolic and/or diastolic function of the myocardium and represents a significant morbidity and mortality to both pediatric and adult populations. First introduced in 1957, cardiomyopathy encompasses a group of disorders characterized by myocardial disease in the absence of coronary arterial disease, hypertension, or valvar heart disease. Our understanding of the molecular and genetic mechanisms responsible for cardiomyopathy has increased exponentially over the last decade. Although the disease process may appear similar in adults and children, children represent a unique population, and data regarding predictors of adverse clinical outcomes in this group are lacking. Echocardiographic assessment of children with cardiomyopathy often represents the first line of investigation and proper assessment is critical in establishing the diagnosis, allowing a strategy of appropriate management and additionally providing prognostic information for the patient. This chapter aims to discuss the echocardiographic evaluation of all forms of cardiomyopathy excluding hypertrophic cardiomyopathy, which will be discussed in a separate chapter.

GENETICS OF CARDIOMYOPATHY AMONG CHILDREN

There are characteristic racial and genetic factors which predispose to various forms of cardiomyopathy. For each form of cardiomyopathy, specific mutations have been identified which are responsible for encoding proteins which compose the cytoskeletal structure. A disruption in the cytoskeletal structure consequently translates to a defective phenotype in these children. Certain populations may have a predisposition to cardiomyopathy also. Arrhythmogenic right ventricular dysplasia (ARVD) has a dramatically increased prevalence among the Italian population and there have been reports of increased risk of HCM among North Americans, Western Europeans, and Japanese.

Cardiomyopathies can be classified into the following:

8.Others, including arrhythmia-induced and anthracycline- induced cardiomyopathies

Dilated cardiomyopathy (DCM) is the commonest form of cardiomyopathy and is defined as a patient having a dilated and poorly contracting left ventricle, namely a left ventricular ejection fraction (LVEF) <40% with a left ventricular end-diastolic dimension (LVEDD) >2 z-scores. These patients develop congestive heart failure as a consequence of impaired LV +/- RV systolic function. The etiology underlying this disease comprises multiple genetic and metabolic disorders and some are provided in Table 23.1. Differentiation from myocarditis is important, as in myocarditis there may be a significant recovery of LV contractility following resolution of the viral process.

Causes and Prevalence of DCM

Approximately 50% of cases are idiopathic, with an overall prevalence of 36.5 per 100,000 patients (Table 23.2). The majority of cases of DCM become manifest in the fourth decade of life, however the disease will often declare itself in childhood.

The myocardium acts as a mechanical syncytium, coupling individual myocytes to provide a concerted myocardial contraction. Force is generated by the actin–myosin interaction and this energy is transmitted to adjacent sarcomeres at Z discs and between myocytes at the intercalated discs. There is an extensive network of proteins which link these sites. Dystrophin and actin represent two essential proteins in this process (Fig. 23.1), and mutations within these components often lead to defective force transmission, which is accompanied by progressive left ventricular dilatation and failure (Frank Starling curve exceeded). The progressive dilatation of the LV results in increased wall stress (Laplace’s law) and increased mismatch of myocardial oxygen supply and demand. With continued ventricular remodeling with ongoing heart failure, cardiac fibroblasts proliferate, and mechanically stable collagen is degraded by metalloproteinases and an excess of poorly cross-linked collagen accumulates within the interstitium. This results in increased muscle mass, ventricular dilatation, and wall thinning. Eventually cardiac apoptosis occurs with noninflammatory programmed cell death. 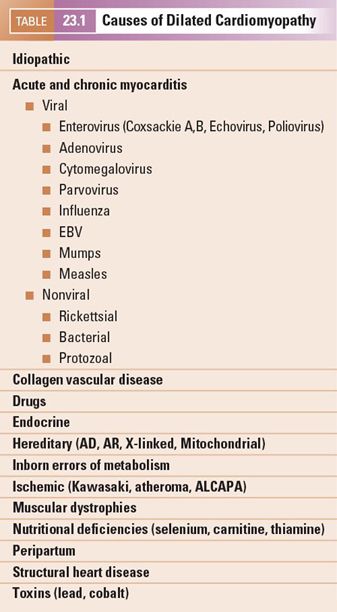 Several genetic loci have been identified to be responsible for DCM. X-linked cardiomyopathy was one of the earliest detected genetic causes of DCM, highlighting the crucial role of dystrophin in maintaining integrity of the cytoskeleton. Other loci include 1p1–1q1, 1q32, 2q31, 3p22–p25, 9q13–q22, 10q21–23, and 15q14. Recently LMNA mutations have been associated with a poor prognosis in DCM.

The most common symptoms are dyspnea, failure to thrive, and orthopnea in older children. Physical examination will reveal tachycardia, elevated JVP, a displaced apical beat and a gallop rhythm. There may be a mitral or tricuspid valve regurgitation murmur if there is significant atrioventricular valvar dilatation or elevated LV end-diastolic pressure. Hepatomegaly is common, although peripheral edema is rarely seen in children compared to adults. The chest radiograph demonstrates cardiomegaly with increased pulmonary venous congestion.

M-mode echocardiography allows for excellent spatial resolution and calculation of left ventricular end-diastolic and end-systolic dimensions and hence derivation of the LV shortening fraction (Fig. 23.4). Using Simpson’s method, serial left ventricular volumes in systole and diastole are measured and a left ventricular ejection fraction is determined (Fig. 23.5). One limitation of calculating LVEF in DCM using Simpson’s method results from LV dilatation which may make it difficult to image the LV apex from the four-chamber and two-chamber views. Myocardial drop-out in the region of the LV apex may be improved using contrast echocardiography. The presence of pulmonary arterial hypertension should be assessed from the TR jet velocity (Bernoulli equation: RV systolic pressure = (TR velocity)2 + right atrial pressure). In adult patients, a characteristic M-mode finding in DCM is an increased E-point to septal separation (EPSS) which is indicative of a reduced left ventricular ejection fraction. EPSS is the distance in millimeters from the anterior septal myocardium to the maximal early opening point of the mitral valve (Fig. 23.6). As the left ventricular internal dimension is proportional to LV diastolic volume, and maximal diastolic mitral valve excursion relates to mitral stoke volume, a reduced LV ejection fraction correlates with a reduction in the mitral valve opening and hence an increased distance between E-point and septum. In normal adult patients the EPSS measures approximately 6 mm. In addition, with a reduced LV ejection fraction, the aortic valve opening points on M-mode become rounded rather than the crisp box-like pattern in the normal functioning heart (Fig. 23.7).

Doppler evaluation of the patient with dilated cardiomyopathy yields much data regarding systolic and diastolic parameters. The stroke volume and hence cardiac output can be calculated from the time velocity integral (TVI) in the left ventricular outflow tract. Cardiac output is a multiple of stroke volume and heart rate. The stroke volume is calculated by the product of the time velocity integral and the cross-sectional area of the left ventricular outflow tract (measured as

r2, r = radius of LVOT) (Fig. 23.8). Errors in measurement of the LVOT radius will exponentially result in error as this measure is squared in calculation of the cross-sectional area. 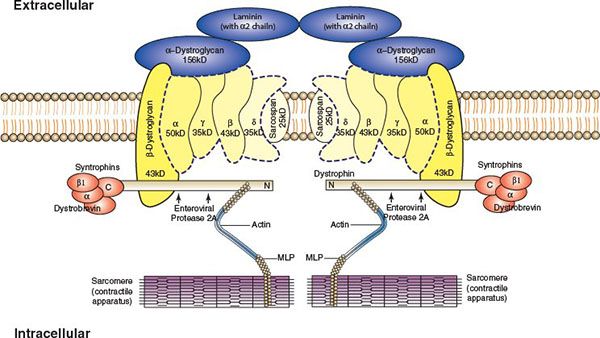 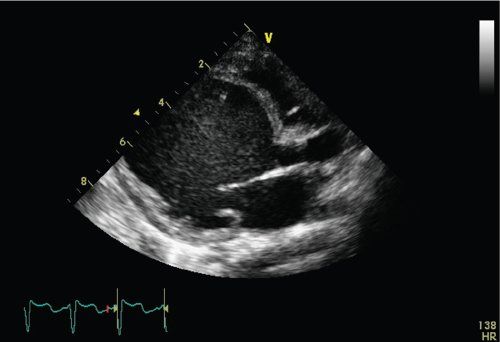 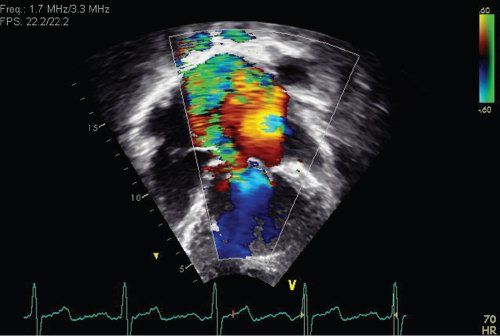 FIGURE 23.3. Moderate mitral regurgitation in a patient with dilated cardiomyopathy. 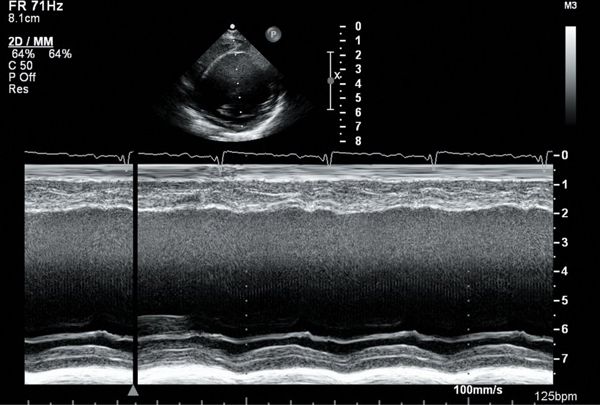 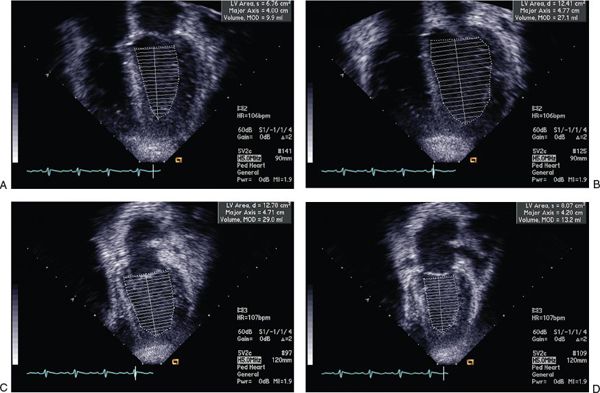 The transmitral inflow and pulmonary venous Doppler patterns are important in the evaluation of left ventricular diastolic relaxation. The patterns of inflow include normal mitral inflow, abnormal relaxation, and decreased left ventricular compliance (Fig. 23.9). With abnormal relaxation there is a decrease in early inflow (E wave) velocity, an increase in A wave velocity, and prolongation of the E wave deceleration time. The pulmonary venous Doppler inflow pattern normally demonstrates a predominant systolic flow but diastolic flow predominates in impaired relaxation states. The atrial reversal wave (Ar) duration and velocity are typically normal. There are various states of decreased compliance with an initial phase of pseudonormalization where E and A wave patterns are normal; however, there is predominant diastolic pulmonary venous flow, increased Ar wave velocity and duration, and a reduction in the mitral Ea tissue Doppler velocity at the lateral mitral annulus. With further reductions in LV compliance the E/A ratio increases, diastolic pulmonary venous filling predominates, and lateral mitral Ea and Aa tissue Doppler velocities are reduced further. End-stage (grade 4) diastolic dysfunction is characterized by a high E/A ratio (typically >3 in children), primary diastolic pulmonary venous filling, and severely reduced lateral mitral Ea and Aa tissue Doppler velocities that are irreversible regardless of medical therapies. One group has reported limited utility of mitral and pulmonary venous Doppler in classifying the degree of diastolic dysfunction in children with cardiomyopathy. 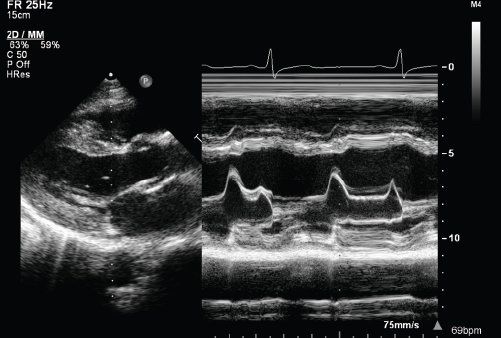 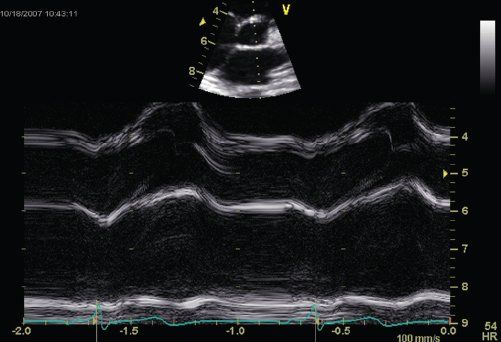 Descent of the base of the heart toward the ventricular apex provides a nonvolumetric assessment of longitudinal LV systolic function. Tissue Doppler imaging velocities at the lateral and septal mitral annuli measure the velocity of relaxation (Ea and Aa velocities) and contractility (Sa velocity) (Fig. 23.10). These are relatively load independent indices of systolic and diastolic relaxation. Sa and Ea velocities are both decreased in patients with DCM, while patients with HCM have greater decreases in Ea compared to Sa velocities. Combining the transmitral E wave velocity and the lateral mitral Ea velocity as a ratio (E/Ea ratio) allows an indirect measurement of left heart filling pressures (Fig. 23.11). In adult patients this E/Ea ratio has shown good correlation with LVEDP (r = 0.86, PCWP = 1.55 + 1.47(E/Ea)) (Fig. 23.12). Nagueh et al. demonstrated an E/Ea ratio >10 predicted LVEDP >15mm Hg with a sensitivity of 85% and specificity 93% in adult patients in normal sinus rhythm or sinus tachycardia. Accurate acquisition of tissue Doppler velocities requires consistent perpendicular interrogation of the area of myocardium being examined. Changes in angle of interrogation will result in widely varying values. Color tissue Doppler imaging may be used to assess differential myocardial velocities throughout the LV wall which is then analyzed using offline analysis. 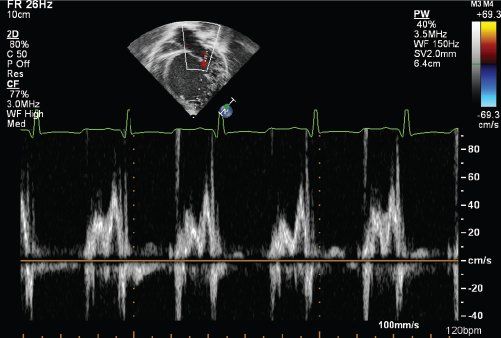 In the 1990s, a novel combined index of systolic and diastolic function, the myocardial performance index, was reported in several cohorts of patients with abnormal LV systolic and diastolic function. This ratio was measured as the summation of isovolumetric relaxation and contraction times divided by the left ventricular ejection time (Fig. 23.13). Although this has shown some clinical utility in adult studies, its utility in providing prognostic information in children with DCM remains contentious.

Other indices of left ventricular systolic function in patients with mitral regurgitation include measurement of the dP/dt derived from continuous wave Doppler signal of the mitral regurgitant jet (Fig. 23.14). A high quality Doppler signal is required with a high sweep speed. The time change in milliseconds is determined from the point at which the velocity is 1m/s and 3 m/s. This represents the time required for a 32 mm Hg pressure change within the LV cavity. The dP/dt is then calculated = 32 ÷ time in milliseconds. A significantly reduced positive or negative dP/dt is associated with poor prognosis. 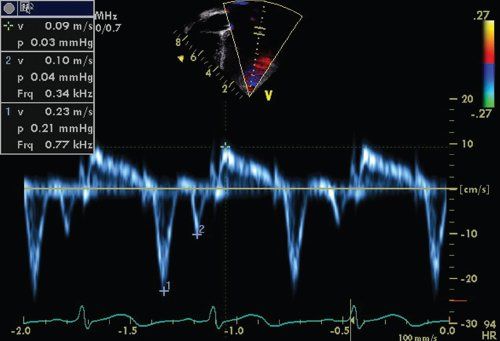 FIGURE 23.11. Transmitral E/Ea as a predictor of LVEDP. 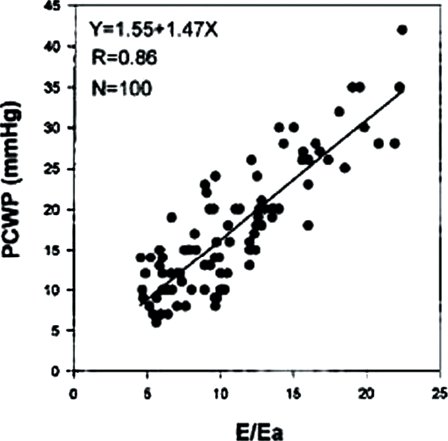 Strain and strain rate imaging allow high resolution interrogation of regional and global left ventricular function. Strain rate is defined as the instantaneous rate of change in the two velocities divided by the instantaneous distance between the two points (Fig. 23.17). Negative values denote active myocardial relaxation and positive values denote active contraction. Strain imaging has proven more robust than most other methodologies as an early and sensitive indicator of regional wall dysfunction. Subtle alterations in ventricular regional wall systolic and diastolic function are detectable using this technique due to its excellent spatial and temporal resolution. Three-dimensional speckle tracking has been shown to be a useful tool in the evaluation of longitudinal, circumferential, and radial strain in patients with nonischemic dilated cardiomyopathy. 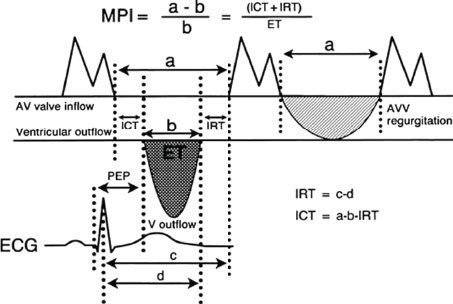 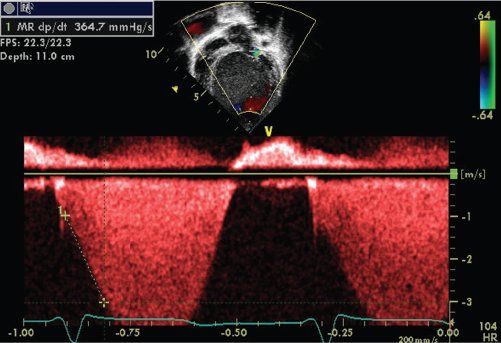