Transseptal left heart catheterization has reemerged as an important tool in the field of interventional electrophysiology. The technique was originally introduced in 1959 as a strategy to directly measure left atrial (LA) pressure and left ventricular (LV) pressure.1 It emerged as an alternative to previous techniques for direct LA access, which included the suprasternal approach (a long needle passed retrosternally through the great vessels into the LA), the posterior transthoracic method (a needle passed lateral to the vertebral column into the LA), the trans-bronchial approach, and the direct puncture of the left ventricle by the subxiphoid (apical approach).2 The transseptal approach was subsequently modified by Brockenbrough and colleagues,3 by Gorlin and colleagues,4 and by Mullins and colleagues.5

Today, transseptal left heart puncture is rarely performed for diagnostic purposes, but a rapidly emerging use for catheter-based ablation procedures involving the left atrium and ventricle has made the technique increasingly relevant. The field of interventional electrophysiology currently accounts for the most common context in which transseptal puncture is being performed. This dramatic rise in transseptal procedures has been driven by ablative procedures for atrial fibrillation. Additionally, transseptal puncture is utilized for the ablation of left mitral annular accessory pathway connections, left atrial tachycardias and macro-reentrant flutters, as well as ablation for ventricular tachyarrhythmias involving the left ventricle or left ventricular outflow tract. Transseptal access to the left atrium and ventricle helps to avoid complications inherent to the retrograde transaortic approach, including dislodgment of atheromatous material, dissection of the aortic wall, and potential damage to the aortic valve.

While multiple imaging modalities have emerged to assist in safely performing transseptal puncture, a biplanar fluoroscopic-guided technique remains the mainstay of this procedure. The operator must have a detailed familiarity with the regional anatomy of the interatrial septum and the fluoroscopic landmarks that help to define the anatomy. Additionally the operator must have a thorough understanding of the technical aspects of the procedure. (This is aided in the field of electrophysiology by the use of diagnostic electrode catheters that are placed in standard anatomic positions.)

The following material is presented for both the basic and advanced operator in providing guidance for a fluoroscopic approach to transseptal catheterization. Data on cardiac anatomy, the functional anatomy of the heart, fluoroscopic correlations, and imaging studies will be incorporated to provide a framework for the safe performance of this procedure.

The interatrial septum is anatomically complex with several important structures within its immediate vicinity. The left atrium, the aorta, the pericardium, and the ostium of the coronary sinus are structures that are closely related to the medial wall of the right atrium. The fossa ovalis represents the true interatrial portion of the septum. It is bounded anteriorly by the aortic sinus of Valsalva and posteriorly by the pericardium (Figure 6.1). The fossa ovalis also represents the thinnest portion of the interatrial septum.

The plane of the interatrial and interventricular septum can be well appreciated using a left anterior oblique (LAO) view at 30° to 40° via fluoroscopy (Figure 6.2a). The use of the right anterior oblique (RAO) view allows the operator to view the anterior to posterior extent of the fossa ovalis (Figure 6.2b). These standard views provide the optimal orthogonal views of the interatrial septum. While interventional cardiologists typically use an anteroposterior (AP) and lateral fluoroscopic view (Figures 6.3a and 6.3b) with a pigtail catheter placed in the aortic root for imaging during transseptal procedures, the use of orthogonal LAO and RAO views is more anatomic, provides more careful consideration of the boundaries of the fossa ovalis, and can be accomplished without the use of a pigtail catheter placed in the aorta, thus eliminating the need for arterial access.

In the field of cardiac electrophysiology, the positioning of electrode catheters can be used as anatomical landmarks to help define the fossa ovalis. Multipolar electrode catheters are placed from a femoral vein and right internal jugular approach and positioned under fluoroscopic guidance into the right atrial appendage, the His-bundle region, the distal coronary sinus, and the right ventricle. The fluoroscopic angles of the RAO and LAO projections should be selected based on the orientation of the interventricular septum, as determined by the direction of the electrode catheter recording His-bundle activation. The angle of the LAO projection is chosen such that the tip of the His-bundle catheter (and therefore the basal portion of the interventricular septum) is oriented perpendicular to this plane (Figure 6.4). The angle of the RAO projection is then set perpendicular to the LAO plane.6

In the RAO projection, the location of the posterior wall of the right atrium can be determined by both the radiopaque border of the atrial wall overlying the radiolucent lung field as well as by the body (proximal portion) of the coronary sinus catheter entering from the right internal jugular or left subclavian approach. The aortic root is indicated by the position of the electrodes recording the proximal His-bundle activation (Figure 6.5a). In the LAO projection, the right margin of the aortic root is also indicated by the position of the catheter recording; His-bundle activation. The margins of the left atrial free wall are best delineated by the position of the distal poles of the coronary sinus electrode catheter, and the roof of the left atrium by the inferior border of the left main bronchus (Figure 6.5b). 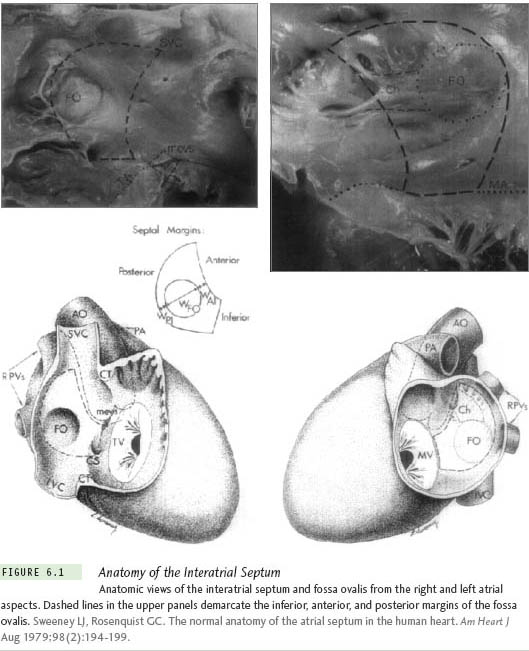 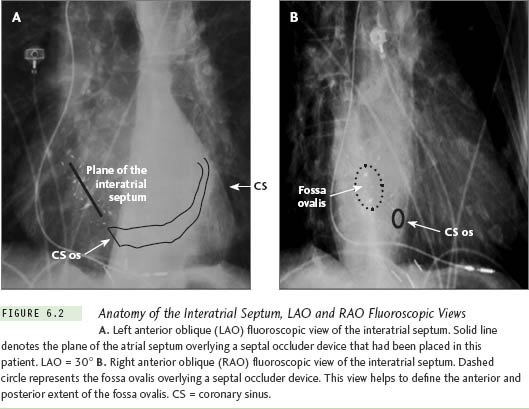