CARDIAC RESYNCHRONIZATION THERAPY FOR THE TREATMENT OF CONGESTIVE HEART FAILURE

A 74-year-old male complained of a notable increase in shortness of breath upon exertion in January 2007. He had previously documented dilated nonischemic cardiomyopathy diagnosed at a cardiac catheterization procedure in November 2006 with a markedly decreased left ventricular ejection fraction (LVEF) of 20%. The patient had a prior history of diabetes mellitus and chronic obstructive pulmonary disease. He had not been compliant with his medical regimen for the past year. An ECG showed sinus rhythm (SR) with an interatrial conduction defect, a PR interval of 206 ms and a prolonged QRS duration of 174 ms with a left bundle branch block (LBBB) pattern (Figure 58.1). Medical treatment for heart failure (HF) with triple drug therapy was initiated and symptoms of HF improved.

Question No. 1: At this time what should be the next steps:

B.The patient should not be considered as a candidate for ICD due to comorbidities.

The patient subsequently underwent an electrophysiologic study for risk stratification for SCD. Programmed ventricular stimulation with rapid ventricular pacing at 230 ms in the outflow tract induced sustained monomorphic ventricular tachycardia (VT). The VT had a left axis, LBBB morphology, was rapid and hypotensive, and required a 150-J cardioversion shock for termination. Intracardiac echocardiography performed to assess left ventricular (LV) function showed an estimated LVEF of 35%, with no intracardiac thrombi or “smoke,” and regional wall motion abnormalities that resulted in septal and posterior wall dyssynchrony. Prophylactic ICD insertion was recommended. A single-chamber ICD was inserted.

Question No. 2: CRT was not indicated in this patient because:

C.A stable medical regimen for HF consisting of beta-blockers, angiotensin-converting enzyme (ACE) inhibitors, and diuretics had not been implemented for 90 days.

The treatment of HF has markedly improved with advances in pharmacological management (Figure 58.2).1–5 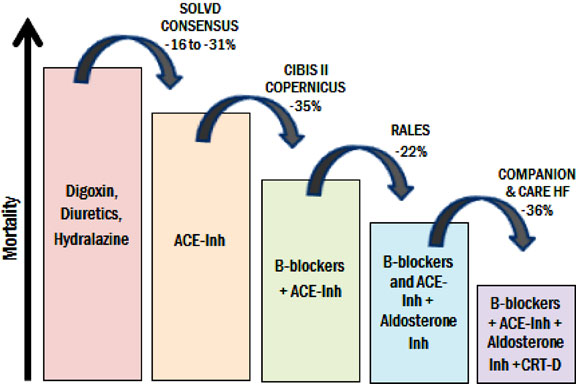 The risk of SCD and pump failure is greatly increased in patients with HF. This risk has been stratified by LVEF (Figure 58.3). 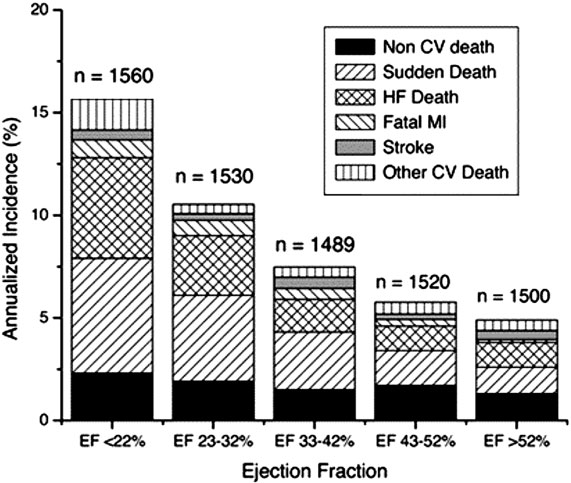 The highest risk of SCD is seen in patients with increasing LV dysfunction. LBBB increases both sudden and all-cause mortality (Figure 58.4). 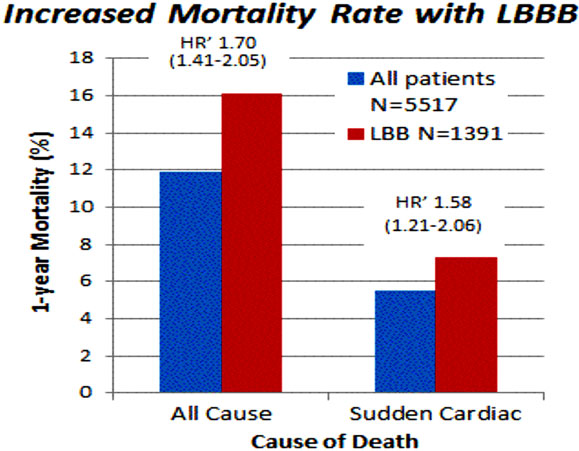 Figure 58.4. One-year mortality rate for all-cause death and sudden death in study population of 5517 patients with CHF (blue bars) and in a subgroup with complete LBBB (red bars). Unadjusted HR is also reported with 95% confidence interval. (Adapted from Baldasseroni et al27 with permission from Elsevier.)

Mortality due to pump failure and sudden death caused by ventricular tachyarrhythmic events has also declined significantly with medical treatment.5,6 For example, in the 2 trials with aldosterone antagonists, spironolactone (RALES), and eplerenone (EPHESUS), relative or risk of SCD was reduced by 29% and 21%, respectively (Figure 58.5).7,8

Hospitalizations for severe symptoms of HF have decreased after increasing the use of ACE inhibitors, beta-blockers, diuretics, and spironolactone. All existing studies on CRT have employed this therapy in symptomatic patients who are on stable background pharmacological therapy.9 This has been defined as a stable regime of maximally tolerated triple drug therapy for 90 days.10 In this patient, this medical approach had not been exhausted. In addition, the presence of AV block limited the use of optimal beta-blocker therapy. Insertion of a pacemaker-defibrillator device permitted prophylaxis for bradycardias and ventricular tachyarrhythmias as well as permitted optimizing medical therapy.

In 2009, 2 years after the initial implant, the patient presented to the emergency department with severe shortness of breath, bilateral basilar rales, and marked jugular vein distension. An echocardiogram revealed further dilatation of the left ventricle with an ejection fraction of 17% along with severe and diffuse LV hypokinesis. Moderate mitral valve regurgitation and tricuspid regurgitation were also seen. The ECG now showed SR with premature ventricular and atrial complexes, a PR interval of 216 ms, a QRS duration of 180 ms with a LBBB pattern, a QT interval of 442 ms, and a QTc interval of 500 ms. The patient was recommended for an upgrade to a CRT-ICD, which was performed. At the implant, a venogram showed a thrombosed left cephalic vein with extension into the left subclavian, which was severely stenosed. A right cephalic approach was used to insert the LV lead and atrial lead. The coronary sinus was large with small branch veins, and placement of Attain® and Ability® leads (Medtronic Inc., Minneapolis, MN) were attempted without achieving a stable lead position in a lateral LV vein. A QuickFlex® lead (St. Jude Inc., St. Paul, MN) was placed and fixed in the target vein and a bipolar atrial pacing electrode was fixed in the right atrium. The leads were tunneled to the left pectoral pocket and a CRT-D (defibrillator) generator replaced the explanted single-chamber device (Figure 58.6). 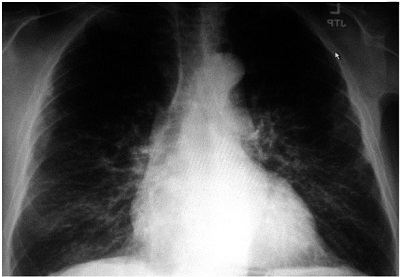 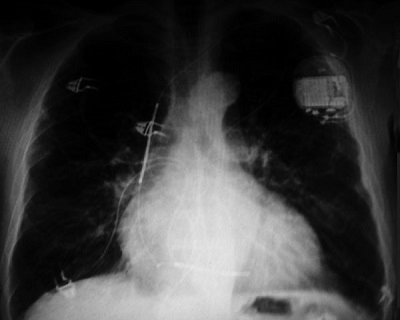 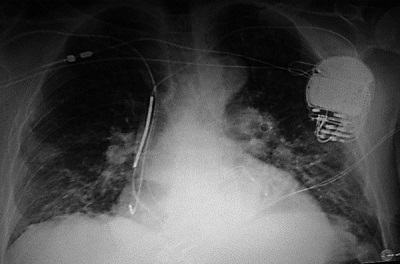 He was anticoagulated with warfarin and a therapeutic regimen of carvedilol, digoxin, diuretic, aspirin, and enalapril therapy was continued.

Question No. 3: The patient was upgraded from a single-chamber ICD to a BiV ICD because:

B.His LVEF had dropped significantly despite the single-chamber ICD.

C.He fulfilled the minimum 2-year requirement with single-chamber ICD treatment before an upgrade to a BiV ICD can be considered.

Question No. 4: In patients with progressive CHF, AV block, and intraventricular conduction delay:

A.A BiV ICD should be considered immediately for risk of SCD regardless of current medication regimens.

B.A BiV ICD prolongs survival and reduces hospitalizations even when the patient is on optimal pharmacological treatment, including beta-blockers, diuretics, and ACE inhibitors.

C.A BiV ICD should be considered only if the patient also has LBBB.

Question No. 5: The MADIT-CRT and RAFT clinical trials found that CRT-ICD therapy reduced HF in patients with class I and II CHF. Would this patient have been considered for CRT therapy with a BiV ICD in 2007 if he was evaluated initially by the standards and trends found in MADIT-CRT and RAFT?

A.Yes, because his CHF was already stratified as class III, therefore he is at higher risk for SCD than the patients in the trial.

B.Yes, because posterior and septal wall dyssynchrony should be treated with BiV pacing as the trials have expanded the range of patients qualifying for CRT treatment.

C.No, because his LVEF still is not low enough to qualify for CRT treatment.