A 49-year-old male was admitted to the hospital with chest pain and shortness of breath in August 2008. He had noted dyspnea on exertion and decreased exercise tolerance for several years. He was clinically noted to have cardiomegaly and rales at both lung bases. Cardiac enzymes and ECG documented a non-ST-segment elevation myocardial infarction (MI). Cardiac catheterization showed a patent coronary stent and medical treatment was recommended.

The patient had a long history of hypertension and juvenile onset diabetes mellitus of 20 years duration. In 2006, he had an acute anteroseptal MI and underwent a percutaneous coronary intervention (PCI) procedure for revascularization with placement of an intracoronary stent. He had a history of chronic heart failure and prerenal azotemia. An echocardiogram showed moderate left ventricular (LV) dysfunction with an estimated ejection fraction (EF) of 30%, while monitoring and electrocardiography showed ventricular ectopics and nonsustained ventricular tachycardia (VT). He was referred for prophylactic implantable cardioverter-defibrillator (ICD) insertion for potential sudden cardiac death (SCD).

Question No. 1: The patient has evidence of moderate LV dysfunction and ventricular arrhythmias and is at risk for sudden death. The preferred therapy at this time is:

Figure 55.1. Sinus rhythm with evidence of a healed anteroseptal MI and lateral wall ischemia is present. Frequent PVC is noted. 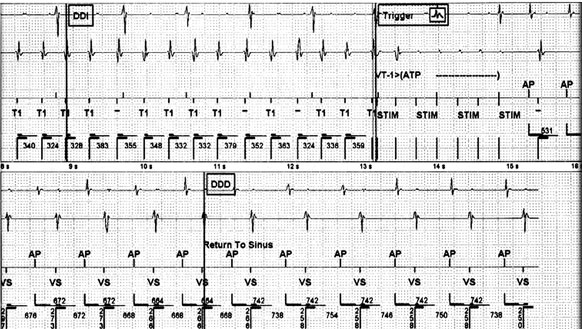 Question No. 2: Electrophysiologic testing is not routinely recommended before prophylactic ICD insertion because:

A.It has no prognostic value after acute myocardial infarction (AMI).

B.MADIT II showed that frequency of ICD therapy delivery was not different in patients who had VT induced with noninvasive programed stimulation.

C.Moderate to severe reduction in left ventricular ejection fraction (LVEF) identifies all patients at risk for SCD after MI.

Question No. 3: Which of the following statements accurately describe(s) risk stratification after AMI?

A.Depressed heart rate variability is a weak predictor of outcomes after AMI.

B.T-wave alternans during stress testing 6 weeks after MI is most predictive of the risk of sudden death when a patient can complete a maximal exercise test.

C.Induction of sustained VT > 10 days after AMI can predict recurrent VT, and ICD therapy can improve outcomes in these patients.

Question No. 4: In patients manifesting nonsustained VT after AMI and depressed LV function:

B.Beta-blocker therapy should be maintained.

C.Wearable defibrillator is an alternative to immediate ICD implant.

D.Amiodarone is the best choice.

Patients with coronary artery disease make up the majority of ICD recipients in most studies. ICD implantation is accepted as reducing mortality and improving outcomes in patients with chronic ischemic heart disease. Patients with reduced LV function have increasing risk of sudden death with progressive impairment of ventricular function and have been shown to obtain greater benefit with ICD therapy than with drug therapy (Figure 55.3 and Table 55.1). A large number of clinical trials have demonstrated improvement in mortality with ICD therapy for secondary and primary prevention.