Question No. 1: Which of the following is regarded as a high-risk marker for sudden death (SD) in a patient with HCM?

Question No. 2: Based on your answer to the previous question, what would you recommend?

B.Addition of a beta-blocker to therapy. 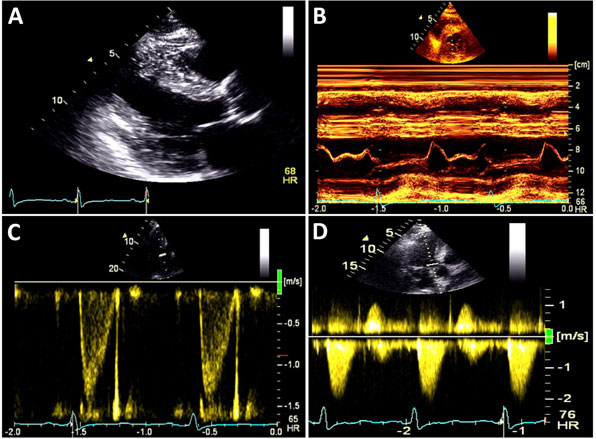 Figure 49.1 A: Parasternal long-axis view of the left ventricle (LV) in diastole in this patient with HCM. Note the asymmetric septal hypertrophy (=17 mm) and increased posterior wall thickness (=12 mm) with normal LV cavity size. B: M-mode echocardiogram recorded in this patient with HCM demonstrates the asymmetric septal hypertrophy; no systolic anterior motion (SAM) of the mitral valve is seen. C: Pulsed-wave Doppler tracing obtained with the cursor at the entrance of the LVOT and continuous-wave (CW) Doppler tracing through the LVOT entrance (D) after provocation with amyl nitrite in the same patient demonstrates the absence of LVOT gradient. This patient is classified as having nonobstructive HCM with no gradients either at rest or with provocation.

Figure 49.2 Steady-state free precession (bright blood) CMR images from a cine loop oriented in short axis (A) and long axis (B) in this patient with HCM. These images demonstrate the abnormal wall thickening of the septum at end diastole. 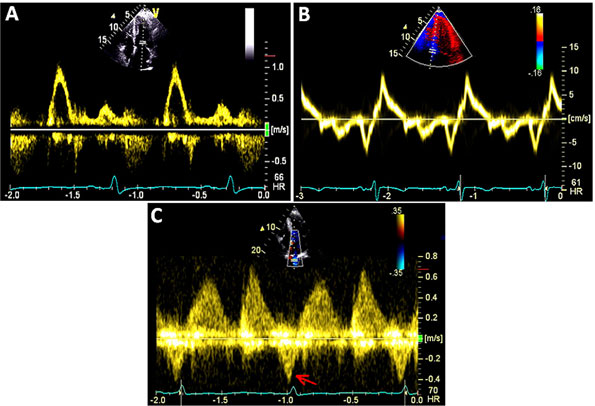 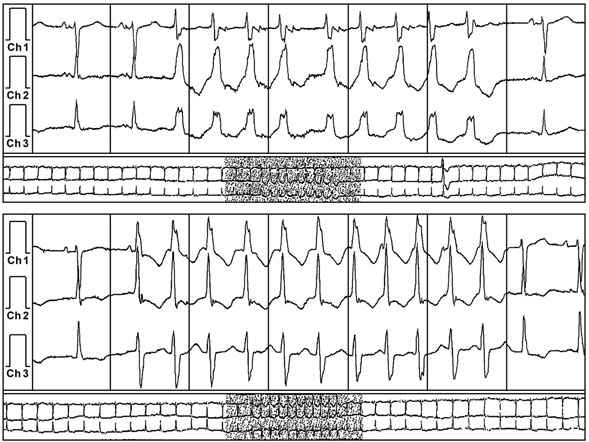 Figure 49.4 Recording from a 24-hour ambulatory ECG (Holter) monitor demonstrating several beats of NSVT in this patient with a diagnosis of nonobstructive HCM and a syncopal episode. 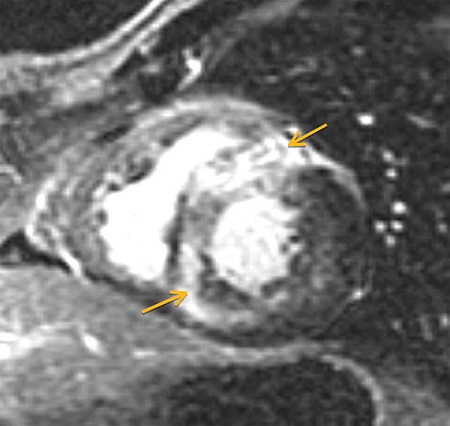 A 36-year-old man was diagnosed with obstructive HCM after a transthoracic echocardiogram for evaluation of chest pain and dyspnea on exertion (Figures 49.6 and 49.7). Appropriate blood pressure response was noted on a treadmill exercise stress test and a 24-hour Holter monitor did not reveal any episodes of NSVT. He denied any family history of HCM or SD and any syncope. CMR obtained did not reveal any DHE (Figures 49.8 and 49.9).

Question No. 3: Which of the following should be utilized in the risk stratification process for recommending prophylactic use of an ICD for primary prevention of SD in this patient?

Question No. 4: Based on the information provided and the answer to the previous question, what would you recommend?

A.Implantation of an automatic ICD.

C.Begin patient on a therapeutic trial of beta-blockade. 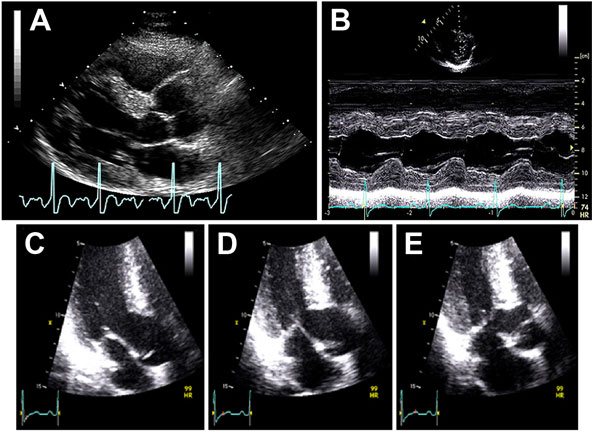 Figure 49.6 A and B: Parasternal long-axis view and M-mode echocardiogram of the LV in Patient 2. Note the moderate to severe increase in LV wall thickness and decreased LV cavity size. The septal wall is noted to be at least 18 mm in thickness, whereas the posterior wall is about 16-mm thick. C, D, and E: Expanded successive parasternal long-axis views (as systole progresses) in the same patient with HCM demonstrating the dramatic SAM of the mitral valve, indicative of significant LVOT obstruction. The greater the degree and duration of SAM, the larger the LVOT obstruction. 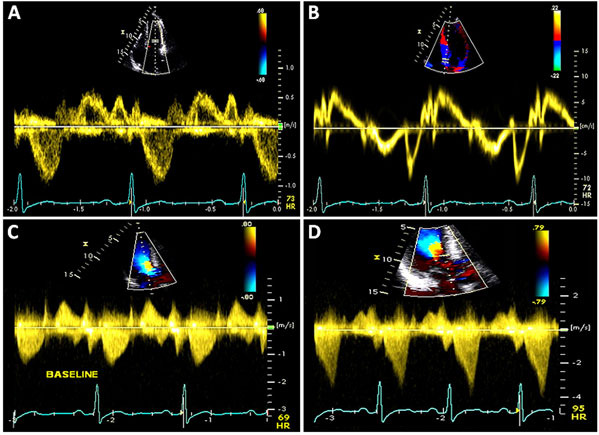 Figure 49.7 A and B: Mitral inflow and tissue Doppler recording of the medial mitral annular velocity in this patient with HCM. These Doppler tracings are suggestive of diastolic dysfunction (Grade I/IV – abnormal relaxation filling pattern with normal to mildly elevated filling pressures). C and D: CW Doppler recordings in this patient at rest (Panel C) and after a provocative maneuver of amyl nitrite inhalation (Panel D). Note that, at rest, there is no LVOT obstruction with a nonexistent resting gradient (Panel C), which increases significantly to 60 mmHg with amyl nitrite (Panel D). This corresponds to SAM where close approximation of the mitral valve with the septum occurs (see Figure 49.6E) in this patient. Note the typical shape on CW Doppler tracing – the “Dagger sign” – obtained through the orifice in the outflow tract.

Figure 49.8 Steady-state free precession (bright blood) CMR images from a cine loop oriented in short axis (A) and long axis (B) in Patient 2. These images demonstrate the abnormally thick walls at end diastole. Note that the morphological subtype of HCM in this patient will be described as a reverse curve septal morphology with predominant midseptal convexity toward the LV cavity, with the cavity overall having a crescent shape. 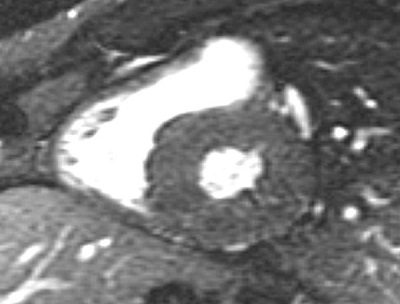 Figure 49.9 Short-axis delayed CMR image obtained during systole, 15 minutes after the intravenous administration of gadolinium contrast. Note the low signal of the myocardium without any fibrosis (compare with Patient 1).

HCM is the most common inherited heart disease (autosomal dominant with incomplete penetrance) that primarily arises from mutations in the genes encoding the cardiac sarcomere myofilament proteins – “sarcomeric HCM” (Figure 49.10). However, additional subgroups (nonsarcomeric proteins), tentatively classified as “Z-disc HCM” and “calcium-binding HCM” (Table 49.1), also exist. These mutations alter the structure and function of the proteins resulting in myofibrillar disarray, marked ventricular hypertrophy (frequently asymmetric), diastolic dysfunction, and, in some patients, sudden cardiac death. The disease is characterized by extraordinary heterogeneity in its genetic substrate, its phenotypic expression, clinical presentation, and natural history, as well as management and specific therapy. HCM can present at any age and may be detected in infancy, childhood, adolescence, or as a coincidental finding at autopsy in the elderly. 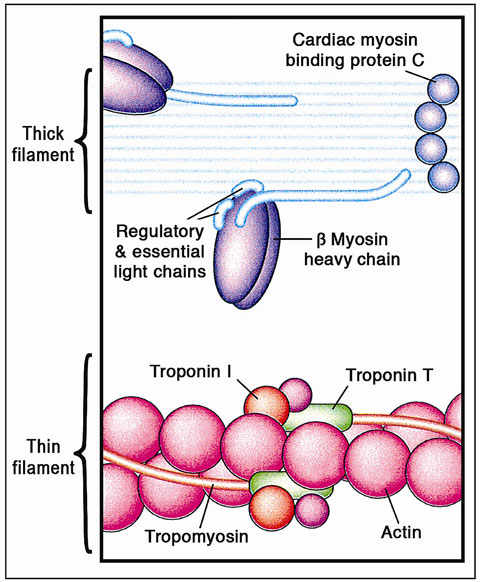 Figure 49.10 The cardiac sarcomere comprises the contractile proteins of the thick and thin filaments. Mutations in genes encoding each of the proteins labeled in this figure can cause HCM; thus, the disorder can result from abnormalities of proteins that have diverse structural, enzymatic, and regulatory functions. (Reproduced from Ashrafian et al44 with permission from Elsevier.)

Genes in bold are available as commercial genetic tests.
(Reprinted from Bos et al45 with permission from Elsevier.)

Anatomically characterized by a thick (symmetrical or asymmetrical) hypertrophied (increased mass) LV, the classic form of HCM involves thickening of the basal anterior septum, which bulges beneath the aortic valve and causes narrowing of the LVOT. However, modern studies have demonstrated a spectrum of patterns of LV wall thickening that constitute the phenotypic expression of HCM (Figure 49.11). The morphological and functional changes associated with HCM result in complex and multiple interrelated changes in cardiac physiology, including diastolic dysfunction, LVOT obstruction, mitral regurgitation, myocardial ischemia, arrhythmias, and, in a minority of patients over time, overt systolic dysfunction (Figure 49.12). 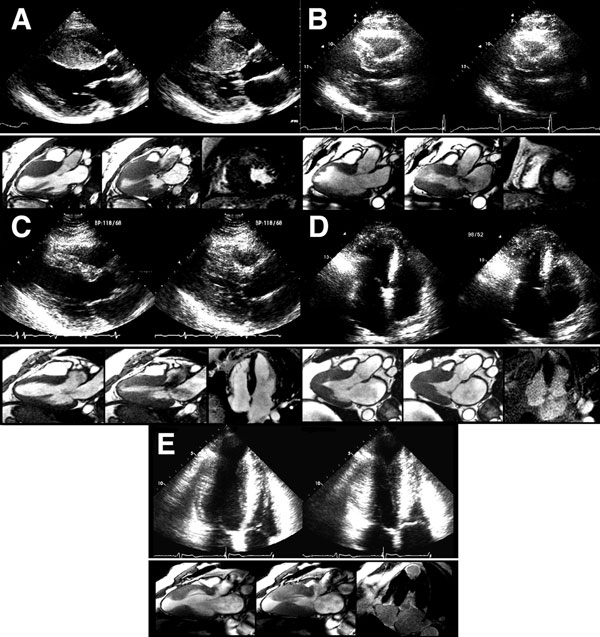 Figure 49.11 HCM morphological subtypes are demonstrated by echocardiography in end-diastolic (left) and end-systolic (right) images of the heart. The HCM subtypes are also demonstrated by magnetic resonance imaging in the same patients. Left and middle columns show steady-state free precession images of the heart in a three-chamber orientation in end diastole and end systole, respectively. Right column shows myocardial delayed enhancement (MDE) images using an inversion-recovery gradient-recalled echo technique. A: Reverse curvature septum HCM shows a predominant midseptal convexity toward the LV cavity with the cavity itself often having an overall crescent shape. Dynamic subaortic obstruction is present in this example with SAM of the mitral leaflets and turbulent flow in the outflow tract. Prominent foci of MDE that indicate myocardial fibrosis are present in the anteroseptum and inferoseptum. B: