A 65-year-old man is taken to the electrophysiology laboratory for catheter ablation of sustained monomorphic ventricular tachycardia (VT). He has a history of myocardial infarction 8 years ago. An implantable cardioverter-defibrillator (ICD) was placed 1 year ago after he presented with sustained VT requiring cardioversion. Amiodarone was added to his regimen after several episodes of VT required ICD shocks. ICD interrogation confirmed monomorphic VT that fails to terminate with antitachycardia pacing. 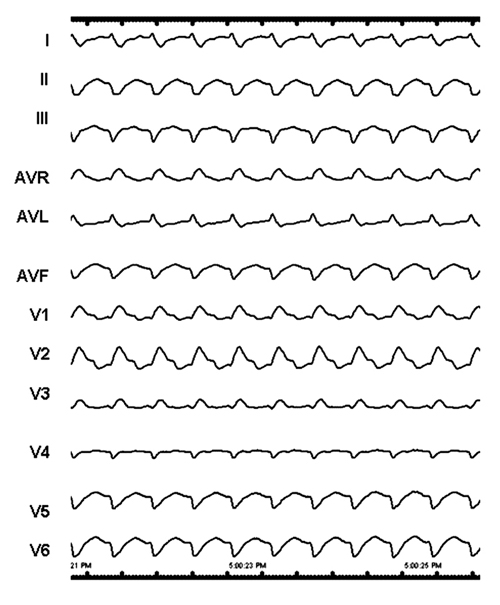 Question No. 1: Based on the ECG, what is the likely location of the infarct scar?

The ECG shows a wide QRS tachycardia with a cycle length of 430 ms. The mechanism of inducible VT in patients with prior myocardial infarction is almost always scar-related reentry in the old infarct region, as illustrated in the top schematic of Figure 34.2. 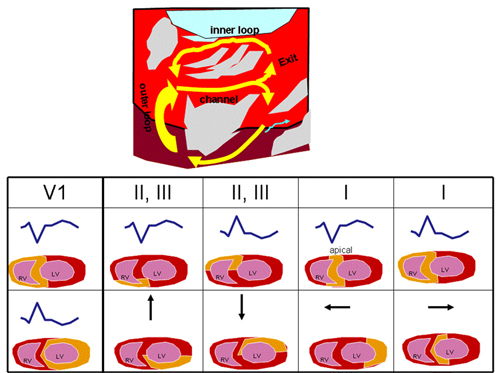 In these reentry circuits, propagation typically occurs through channels formed by surviving myocardium bordered by fibrosis and, in some cases, a valve annulus. Depolarization of the reentry circuit channel does not generate sufficient signal to be detected in the surface ECG. The QRS complex is inscribed as the wavefront emerges from the channel where it connects to the ventricular myocardium, a region that is identified as the exit from the channel. After emerging from the exit, the circulating wavefront propagates through loops, either along the border of the scar or within the scar, to return to the entrance of the channel.

The QRS morphology of scar-related reentrant VT reflects the location of the exit. An approach to estimate the location of the reentry circuit exit is shown in Figure 34.2. In lead V1, a dominant S wave (left bundle branch block-like configuration) indicates the exit is in the septum or right ventricle (RV). A dominant R wave (right bundle branch block-like configuration), as in this case, indicates a left ventricular exit. The frontal plane axis identifies the position of the likely exit as viewed from the left anterior oblique projection of the ventricle. A superior frontal plane axis, as shown here, is consistent with early activation of the inferior wall of the ventricle. For left ventricular VT, a rightward axis, as is present here, suggests the exit is farther from the septum, whereas an axis directed to the left places the exit toward the septum. However, very apical exits near the septum can have a rightward axis, as the LV sits progressively more leftward as one moves from base to apex. An exit near the apex generates S waves in the midprecordial leads (V3–V4), whereas basal exits near the mitral annulus produce dominant R waves in the midprecordial leads. In summary, this VT exit is likely at the inferolateral LV.

The approach to ablating this type of scar-related monomorphic VT proceeds in an organized stepwise manner. Catheters are inserted into the RV and, usually, right atrial locations. Programmed stimulation is used to induce VT and confirm the tachycardia is in fact ventricular and not due to bundle branch reentry. Atrioventricular (AV) dissociation indicates VT with rare exception. If a His deflection is present prior to the QRS, its relationship to ventricular activation is assessed to determine whether it is passively activated retrogradely, or whether it is part of the reentry circuit, in which case bundle branch reentry is likely. In this case, the morphology of the VT and known history of prior myocardial infarction favor a left ventricular origin of VT. The next step is to obtain access to the LV. This can be achieved via a retrograde aortic approach or, if peripheral vascular disease or aortic valve disease is present, an atrial transseptal approach, which allows the mapping catheter to reach the LV through the mitral valve. If VT is not incessant, initial mapping is performed during sinus or, due to poor AV conduction as in this case, paced rhythm.

The scar location is then identified from a voltage map of the LV (Figure 34.3