A 55-year-old man who had a transmural anteroseptal myocardial infarction 10 months ago complains of palpitations. On 2 occasions, he has felt dizzy and almost fainted. Holter monitoring showed runs of nonsustained ventricular tachycardia (VT) associated with the palpitations and dizziness. He was brought into the hospital for an electrophysiologic study. The recordings in Figure 31.1 that were taken during this study show that premature stimulation either during sinus rhythm (see Figure 31.1A) or ventricular pacing (see Figure 31.1B) induced sustained monomorphic VT that could also be stopped by premature stimulation. 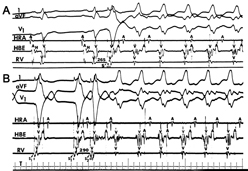 Figure 31.1. Electrocardiographic leads I, aVF and V1, and electrograms (EGMs) high right atrium (HRA), His bundle region (HBE), and right ventricle (RV) recorded during electrophysiologic study in a patient with a healed myocardial infarction and sustained VT. In Panel A, tachycardia is induced by a single premature stimulated impulse (S and arrow in RV EGM ) during sinus rhythm and, in Panel B, by a single premature stimulated impulse (S2) during ventricular pacing (S1) (RV EGM). (Reproduced from Josephson1 with permission from Lippincott Williams and Wilkens.)

Question No. 1: What is the mechanism for VT that is started and stopped by programmed stimulation in a patient with a 10-month-old anteroseptal myocardial infarction?

Question No. 2: Which of the following describe characteristics of EGMs recorded at the site of origin of the VT in a patient with a healed myocardial infarction?

Question No. 3: Uniform anisotropy describes the relationship of conduction velocity to the orientation of the myocardial fiber bundles and is important for reentrant excitation. Which of the following accurately describes this relationship?

Question No. 4: Which of the following is a mechanism for nonuniform anisotropic conduction that causes slow nonuniform conduction in structural heart disease?

C.Neither of the above is correct.

D.Both of the above are correct.

VT in patients with healed myocardial infarction, such as the patient described in the case, is caused by reentrant excitation.1,2 A feature of reentry is that it can be started and stopped by premature electrical stimulation of the ventricles as shown in the records taken during the clinical study in Figure 31.1. Although triggered activity caused by delayed afterdepolarizations also can be started and stopped by electrical stimulation,2 other features of tachycardia associated with healed myocardial infarction such as entrainment and failure to be stopped by adenosine or verapamil provide additional evidence for reentry.

Reentry that causes sustained VT in patients with healed myocardial infarction occurs in border zones of myocardium that are adjacent to the infarct scar and which have altered electrophysiologic properties that are caused by prolonged ischemia. Figure 31.2 shows an activation map of such reentrant activity. 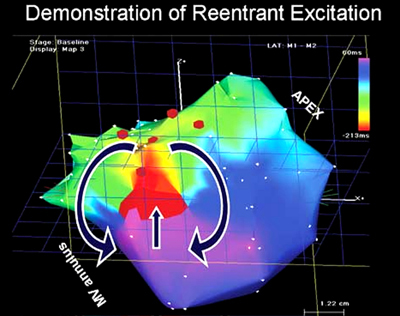 Figure 31.2. Figure-of-8 reentrant pattern in the subendocardial border zone during monomorphic sustained VT in a patient with a healed myocardial infarction. An anatomical representation of the surface of the left ventricle is shown with borders at mitral valve (MV) annulus and apex indicated. Activation pattern obtained from time relationships of multiple EGMs is indicated by colored isochrones from red being earliest to dark blue being latest. Arrows point out the sequence of figure-of-8 reentry characterized by 2 reentrant circuits, one clockwise and the other counterclockwise with a common central pathway. (Reproduced from Josephson1 with permission from Lippincott Williams and Wilkens.)

Slow nonuniform conduction is an important cause of reentrant excitation. Its presence at sites of origin of VT is indicated by the characteristics of the EGMs recorded from this region (Figure 31.3). 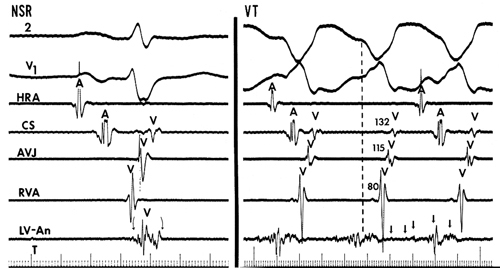