A ring catheter is placed in the left superior pulmonary vein (LSPV) during sinus rhythm in a patient presenting for his first ablation procedure for idiopathic paroxysmal atrial fibrillation (AF). During extrastimulus testing while pacing from the distal coronary sinus (CS) (Figure 23.1), 2 distinct potentials emerge on the ring-catheter recording. 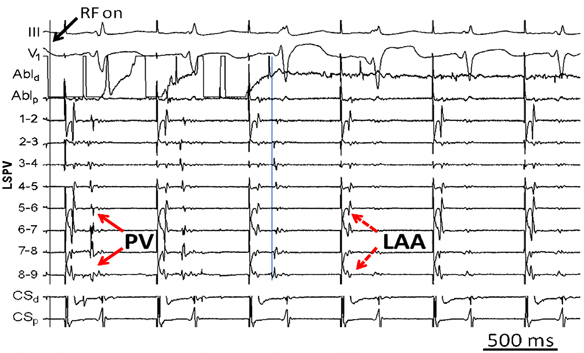 Question No. 1: Which of the following is true?

D.The 2 potentials are generated by a conduction delay into the LAA.

Question No. 2: Regarding the patient described in the previous question, what is the recommended ablation strategy?

C.PV isolation followed by linear ablation at the mitral isthmus.

E.Circumferential PV ablation with the end point of voltage abatement along the ipsilateral circular lesions.

Question No. 3: During antral ablation of the left-sided PVs, you note the esophagus is in close contact to the posterior aspect of the PVs. What is the most reasonable strategy that will facilitate PV isolation with minimal risk to the esophagus?

A.Since the likelihood of esophageal injury is so low, proceed with left antral ablation without regard to the esophagus, using 30 watts of irrigated radiofrequency (RF) energy.

C.Complete the anterior aspect of the circumferential lesion, followed by RF energy delivery at the crux between the upper and lower PVs before targeting the posterior aspect near the esophagus using 25 watts of irrigated RF energy.

E.Complete the anterior aspect of the circumferential lesion using RF energy, followed by cryoballoon ablation of the left-sided PVs.

Question No. 4: While ablating near the anterior aspect of the right superior PV in the patient described above, you note phrenic nerve capture with high-output pacing. What is a reasonable strategy to minimize the risk of phrenic nerve injury?

A.Perform right superior PV isolation using a 28-mm cryoballoon instead of conventional RF energy since the risk of phrenic nerve injury with the former is lower.

B.Since the risk of phrenic nerve injury is low, and reversible in many cases, proceed with ablation without further testing.

D.Abort the procedure, and refer the patient for a surgical ablation procedure.

E.Forgo isolation of the right superior PV, and perform linear ablation at the left atrial roof instead to minimize the risk of AF recurrence.

Question No. 5: A patient with idiopathic paroxysmal AF presents for a repeat procedure for recurrent AF. She did well for 6 months after the first procedure, which consisted of antral PV isolation. Mapping with a ring catheter shows PV reconnection in both upper PVs. Which of the following is the most reasonable strategy during the repeat procedure?

A.Perform complete circumferential ablation around both antra with the end point of PV isolation.

B.Since the patient has failed a PV-based procedure, perform linear ablation at the roof and mitral isthmus with demonstration of conduction block.

C.Map and ablate the discrete PV breakthroughs rather than recreating the entire circumferential lesion set.

D.Administer isoproterenol to determine which of the 2 reconnected PVs is arrhythmogenic, then isolate the culprit PV. 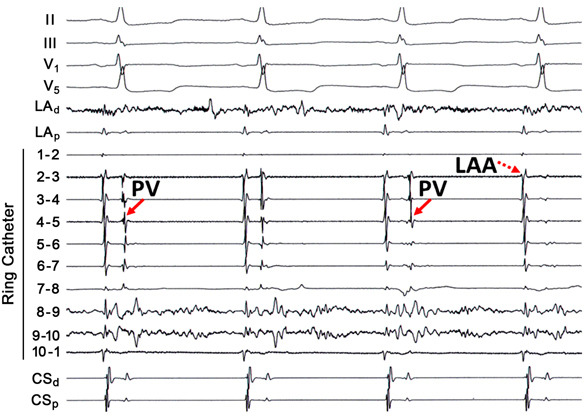 Despite the promulgation of various ablation techniques for AF over the last decade, pulmonary vein remains the cornerstone for patients with both paroxysmal and persistent AF. The original description of elimination of PV triggers involved RF energy delivery within the culprit vein. Because ablation within a vein may be complicated by stenosis, ostial ablation of the PVs became the preferred method of PV isolation. Ostial or segmental PV isolation involves identifying PV breakthroughs on a circular mapping catheter placed at the PV ostium. Although PV potentials may be recorded on all bipoles of the circular catheter, identification of the earliest activation may obviate RF energy delivery around the entire circumference of the PV ostium (Figure 23.2). This may have important implications for procedure times and risk of complications, such as PV stenosis. However, in some patients the left atrial (LA)-PV connections may be quite broad, requiring ablation around much of the ostium.

Discrete PV breakthroughs may be identified during sinus rhythm and atrial pacing. In a patient who has not previously undergone PV isolation, the atrial and venous potentials frequently appear fused on the circular mapping catheter. Atrial pacing, typically from the CS or the LA appendage, advances the atrial component, unmasking the PV potentials. The earliest activation is then identified and then targeted for ablation. After elimination of a PV breakthrough, the activation pattern frequently changes, suggesting the existence of multiple LA–PV connections. The end point is absence or dissociation of PV potentials at the ostium. Although some patients may only require isolation of only the “culprit” vein, that is, one that has been shown to be arrhythmogenic on provocative testing, it is reasonable to electrically isolate all PVs to prevent recurrent arrhythmias.

Pacing from the LA appendage or the CS is not as helpful in discriminating between atrial and venous potentials on tracings from the right-sided PVs. For the right superior PV, one can employ activation mapping with respect to the P wave on the ECG to determine if the residual potential is of atrial or venous origin. If the EGM in question occurs within 30 ms of the onset of the P wave, then it is very likely due to far-field activation of the superior vena cava (SVC).1 If the EGM is advanced to the stimulus artifact during right atrial pacing, a far-field origin is confirmed (Figure 23.3). For the right inferior PV, posterior LA pacing may be helpful in discriminating between far-field LA potentials and near-field PV potentials.