An 80-year-old male patient presented with fatigue and vertigo, and was found to have atrial flutter with a fast and irregular ventricular rate (130 bpm) and signs of heart failure. He had a history of a transient ischemic attack and 2 past episodes of atrial fibrillation (AF), which had been cardioverted electrically. His ECG is shown in Figures 20.1 and 20.2. He was anticoagulated and administered beta-blockers and diuretics, and hospitalized for catheter ablation of his atrial flutter. Intracardiac thrombi were excluded by a transesophageal echocardiogram and an electrophysiology (EP) study followed by radiofrequency (RF) catheter ablation was performed. 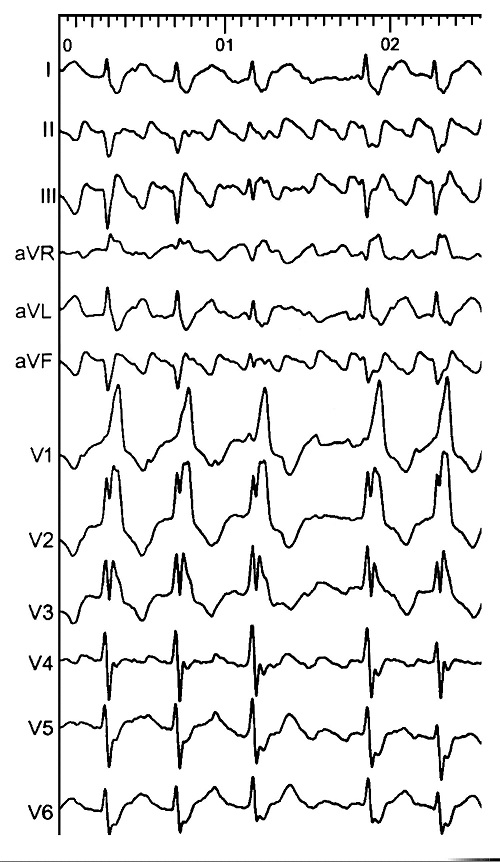 The ECG in Figure 20.1 shows atrial arrhythmia at a rate with variable atrioventricular (AV) conduction and complete right bundle branch and left axis deviation resulting with a rapid ventricular rate.

Question No. 1: The atrial arrhythmia shown in this ECG is: 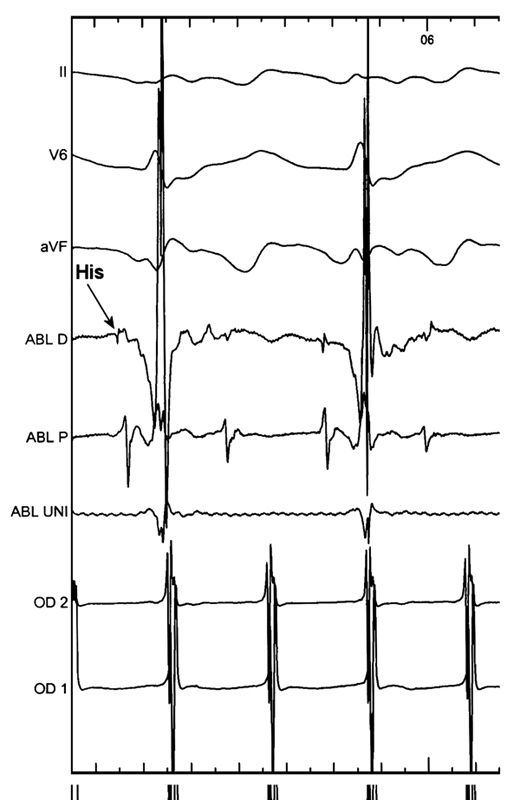 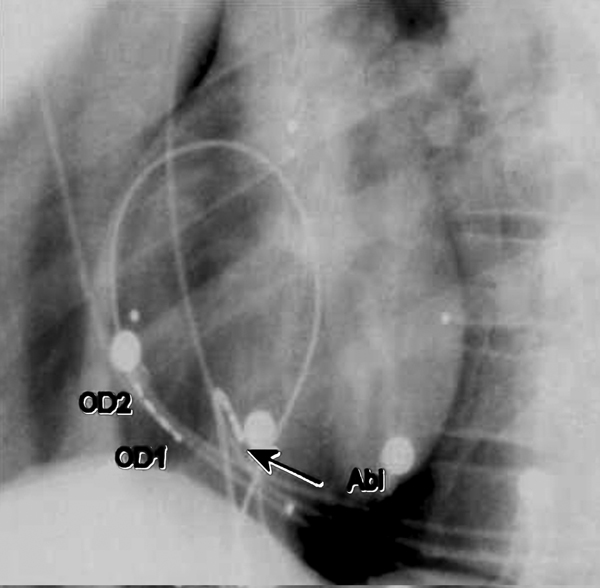 This intracardiac tracing (see Figure 20.2) at a sweep speed of 100 mm/s shows low right atrial free wall activation recorded from a vertically oriented quadripolar catheter (bipoles OD1 and OD2; OD1 is the lower of the 2), and a quadripolar RF ablation catheter (bipoles Abl dist and Abl prox, as well as Abl uni). Also shown at the top are surface ECG leads II, V6 and aVF. Note that the atria are activated regularly at a cycle length of 250 ms with activation in OD2 preceding OD1. In view of the vertical position of the quadripolar catheter (Figure 20.3), this sequence indicates activation descending down the antero-lateral right atrial free wall, which is typical of counterclockwise typical atrial flutter. This arrhythmia is characterized by a counterclockwise-rotating macroreentrant circuit around the tricuspid valve annulus (when viewed from the left anterior oblique (LAO) perspective). The activation sequence has traditionally been documented with a multipolar (10–20 electrode) preformed loop-like catheter confirming to the tricuspid annulus. However, an appropriately placed (see Figure 20.3) quadripolar catheter can equally effectively document descending activation of the right atrial free wall. The correlation of low right atrial free wall activation with the beginning of the “plateau” segment of the surface ECG in inferior leads (II, III, and aVF) and that of the coronary sinus (CS) ostium (or the septal right atrium nearby the His bundle, see Figure 20.2) with the end of the “plateau” phase confirms the diagnosis of counterclockwise typical (cavotricuspid isthmus-dependent) atrial flutter. The ablation catheter can be conveniently moved around to document this correlation.

Typical flutter is indicated in this ECG by:

Question No. 2: Clockwise typical atrial flutter is characterized by: