This chapter includes pulmonary hypertension and other abnormalities of the pulmonary vasculature that cause significant respiratory dysfunction and are unrelated to an inflammatory reaction.

Other Causes of Pulmonary Arterial Hypertension

Pulmonary hypertension is defined clinically as a mean pulmonary artery pressure greater than 25 mmHg at rest or greater than 30 mmHg during exercise. A number of detailed classification schemes are available that are based variably on pathologic, clinical, or mechanistic aspects. For pathologists, a simplified classification that separates cases based on arterial or venous origin seems to be most practical, and is shown in Table 10.1.

In addition to diagnosing pulmonary hypertension, its severity should be qualitatively assessed as to mild to moderate or severe. Although the formal grading system of Heath and Edwards, which divided pulmonary hypertension into six grades, is no longer practical, the current grading scheme is based on that system. Use of elastic tissue stains is helpful both in demonstrating hypertensive vascular changes and in assessing severity.

Medial hypertrophy in muscular arteries is the main finding in mild to moderate pulmonary hypertension (Figure 10.1). Assessing the thickness of arterial media can be difficult, however, and is somewhat subjective. In general, the medial thickness should not exceed 10% to 20% of the vascular radius, but this measurement requires precise cross-sectioning of the artery and may vary depending on fixation, post-excision atelectasis, and inflation techniques. Furthermore, nonspecific medial thickening may occur secondary to inflammation in the adjacent bronchiole in the absence of pulmonary hypertension. Therefore, unless the medial hypertrophy is severe and causes significant luminal narrowing, other more objective features should be present before diagnosing mild to moderate pulmonary hypertension. The presence of increased numbers of smooth muscle fibers within the media characterized by elongated, closely spaced nuclei arranged in parallel may help to confirm hypertensive changes, but is not always present (Figure 10.1A). Mild intimal thickening due to reactive endothelial cells and often mild fibrosis should accompany true medial hypertrophy and is best demonstrated in elastic stains (Figure 10.1B; see also Figure 10.21). It also tends to be subjective, however, and is not entirely specific. 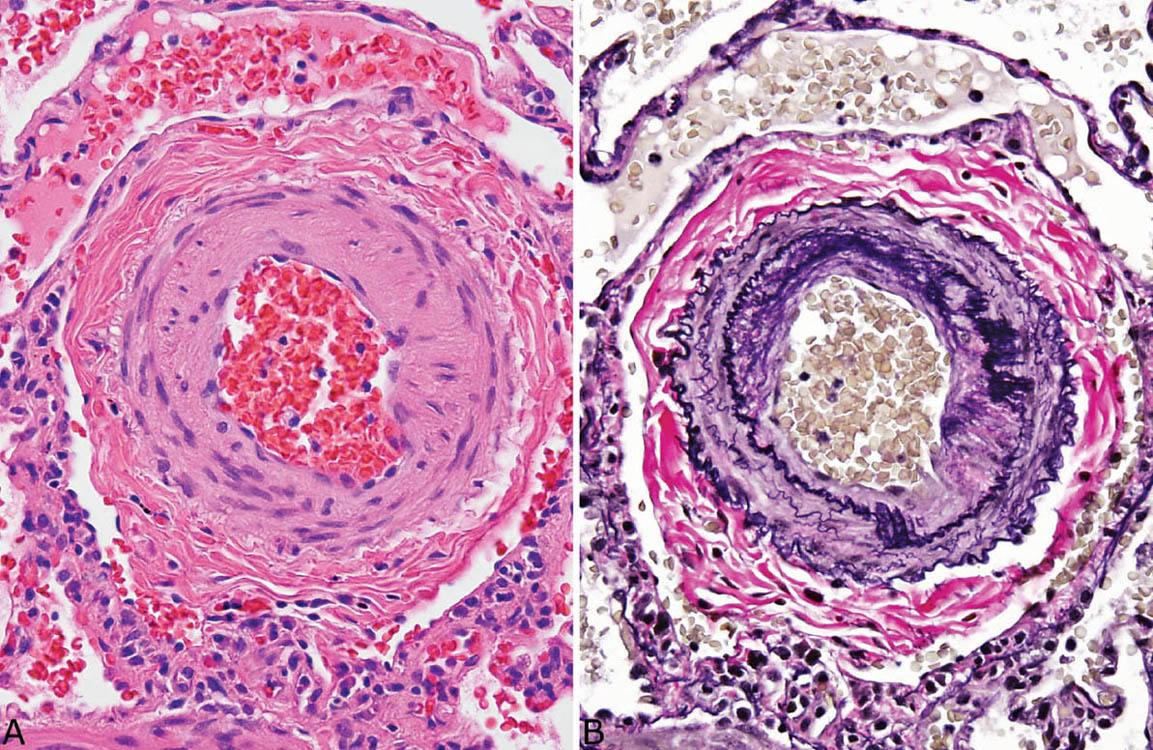 FIGURE 10.1    Medial hypertrophy in mild to moderate pulmonary hypertension. (A) Cross-section of a muscular artery shows thickened media comprising about 30% of the arterial radius. Note the focally increased numbers of smooth muscle nuclei arranged in parallel (bottom) within the media. (B) An elastic tissue stain outlines the two distinct elastic layers indicative of arteries and outlines the thickened media with associated mild intimal thickening.

Muscularization of pulmonary arterioles is an objective finding that, although often focal, should be identified before diagnosing mild to moderate pulmonary hypertension in the absence of other features that confirm hypertension (Figures 10.2 and 10.3). Normally, arterioles, which are found adjacent to alveolar ducts or in nearby alveolar septa, are composed of an endothelial layer surrounded by a single elastic layer, but no muscle layer. In pulmonary hypertension, a muscle layer develops in the arteriole wall, and it may be sufficiently thick to cause luminal narrowing or obliteration (Figure 10.2). Frequently, as occurs in muscular arteries, increased numbers of lamellar smooth muscle cell nuclei can be found in affected arterioles (Figure 10.3). Intimal fibrosis may also accompany muscularization of arterioles, and is best demonstrated in elastic tissue stains.

Severe pulmonary hypertension is easier to diagnose than mild to moderate hypertension, since a number of additional objective and more straightforward vascular abnormalities are present. Intimal thickening with fibrous proliferation is prominent in muscular arteries and causes luminal narrowing and sometimes complete obliteration (Figures 10.4 and 10.5). In some cases, the intimal fibrosis manifests a distinct concentric configuration (so-called concentric lamellar fibrosis), which along with plexiform lesions is thought to indicate irreversibility.

Plexiform lesions are a definitive marker of severe, irreversible pulmonary hypertension, although they are not present in all cases. They are easily recognized at low magnification, at which they are seen as outpouchings of muscular arteries usually just distal to branch points (Figure 10.6). As highlighted in elastic stains, there is aneurysmal dilatation of the vessel in this area with loss of normal mural elastic tissue and filling of the lumen by a proliferation of small vascular spaces with accompanying fibrosis. The process has some resemblance to organized and recanalized thrombi, and there may be small fibrin thrombi within some of the vascular spaces (Figure 10.7). In more advanced lesions, thin-walled blood-filled vascular channels, so-called angiomatoid (or dilatation) lesions, may be found around the plexiform lesions, and are also markers of severe hypertension (Figure 10.8). Early plexiform lesions can sometimes be seen as single or multiple tiny lumens emanating from a larger muscular artery (Figure 10.9). The lumens are lined by reactive endothelial cells and surrounded by hyperplastic intimal and smooth muscle cells. Fibrinoid necrosis may be present in the wall of the parent artery. Even in the absence of well-formed plexiform lesions, these tiny areas of vascular proliferation are markers of severe hypertension. 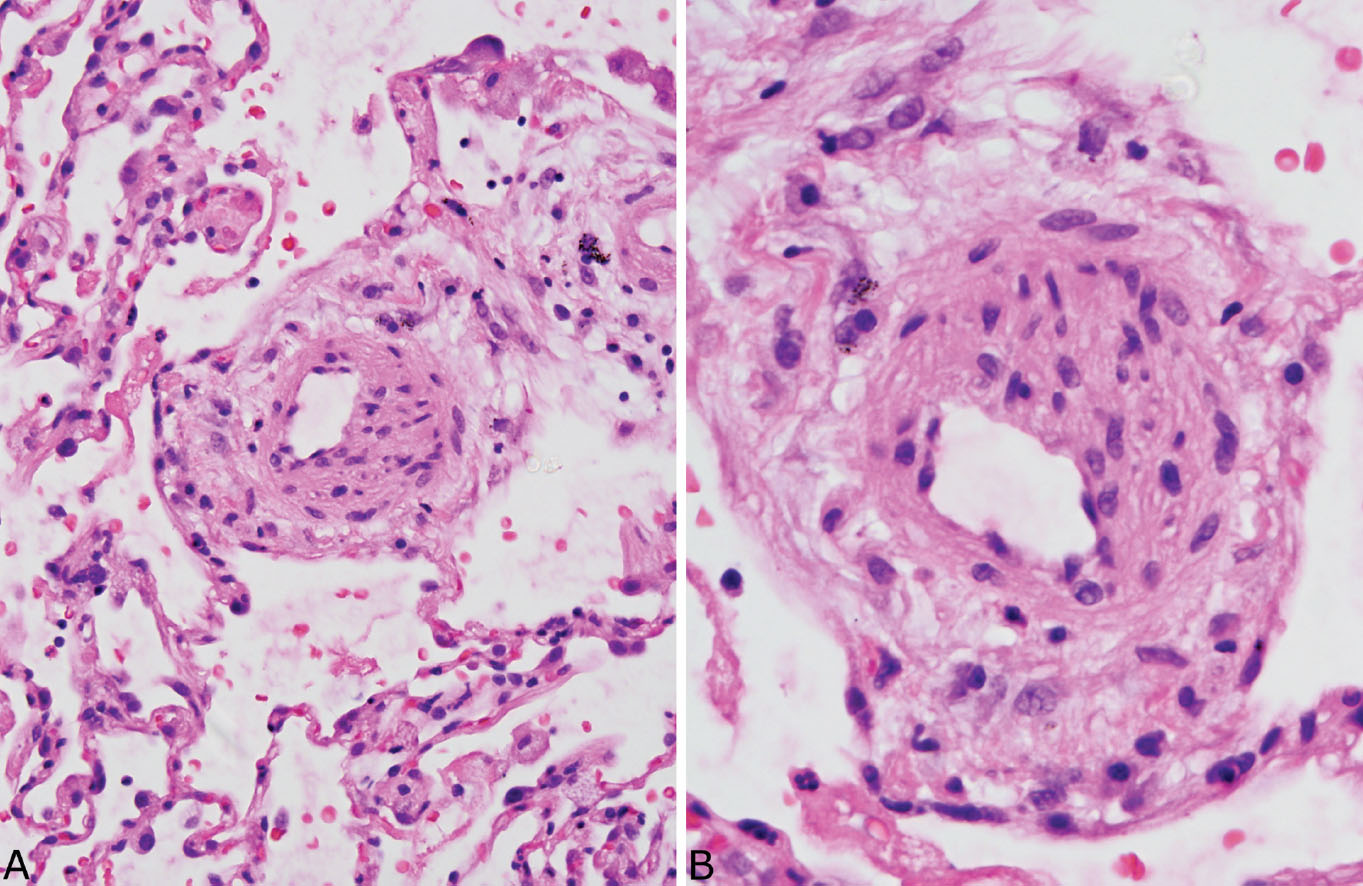 FIGURE 10.2    Muscularization of arterioles. (A) At low magnification, a thick-walled arteriole is seen adjacent to the mouth of an alveolar duct. (B) At higher magnification, the thickened wall is caused by smooth muscle cells arranged around the endothelial lining. The blood vessel is identified as an arteriole rather than artery because of its location near an alveolar duct rather than a bronchiole. 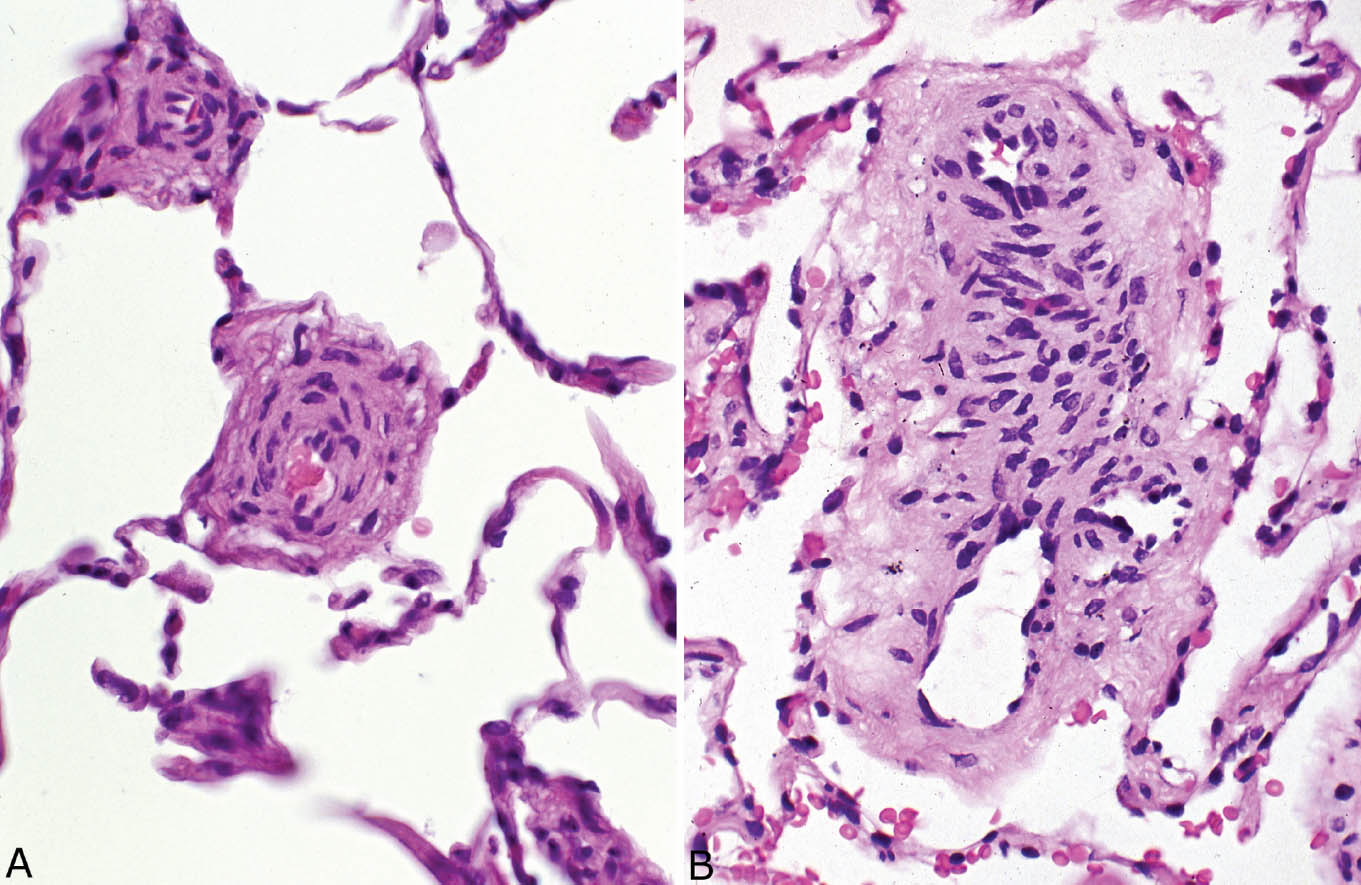 FIGURE 10.3    Muscularization of arterioles. (A, B) These photomicrographs show a thick muscle layer in arteriole walls that is composed of numerous smooth muscle cells with closely spaced nuclei arranged in parallel. Marked luminal narrowing is also present. These blood vessels are identified as arterioles rather than arteries because of their location in alveolar septa without an accompanying bronchiole. 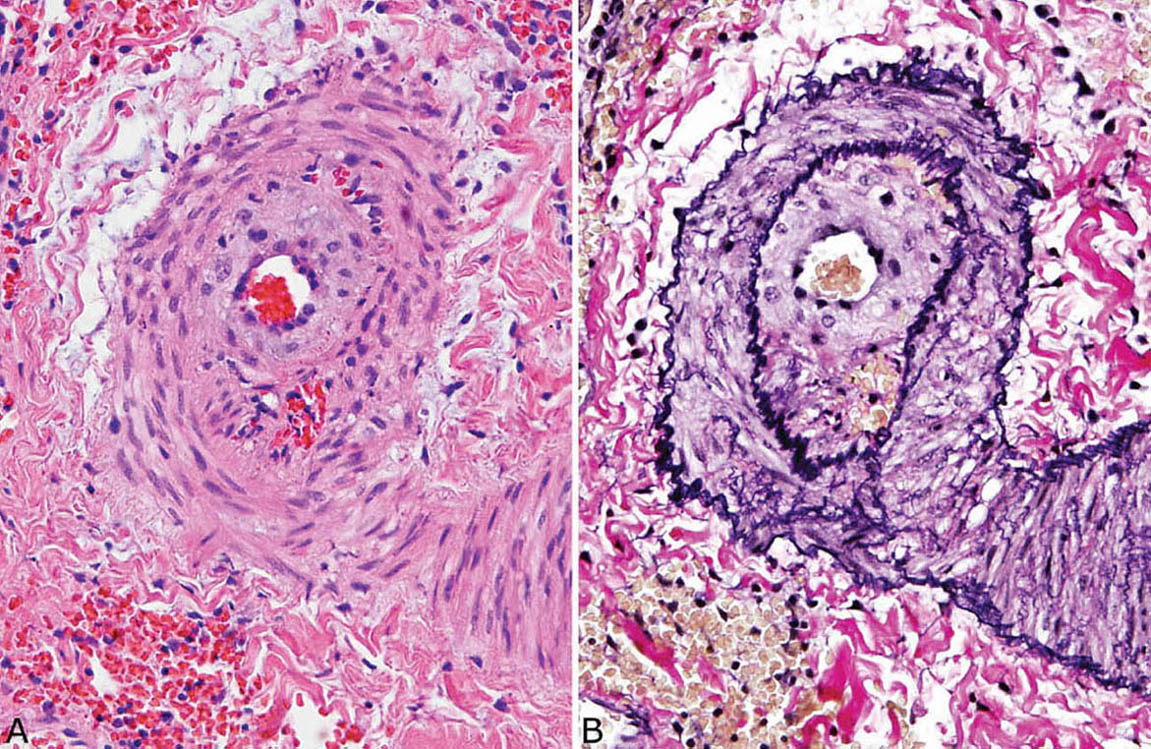 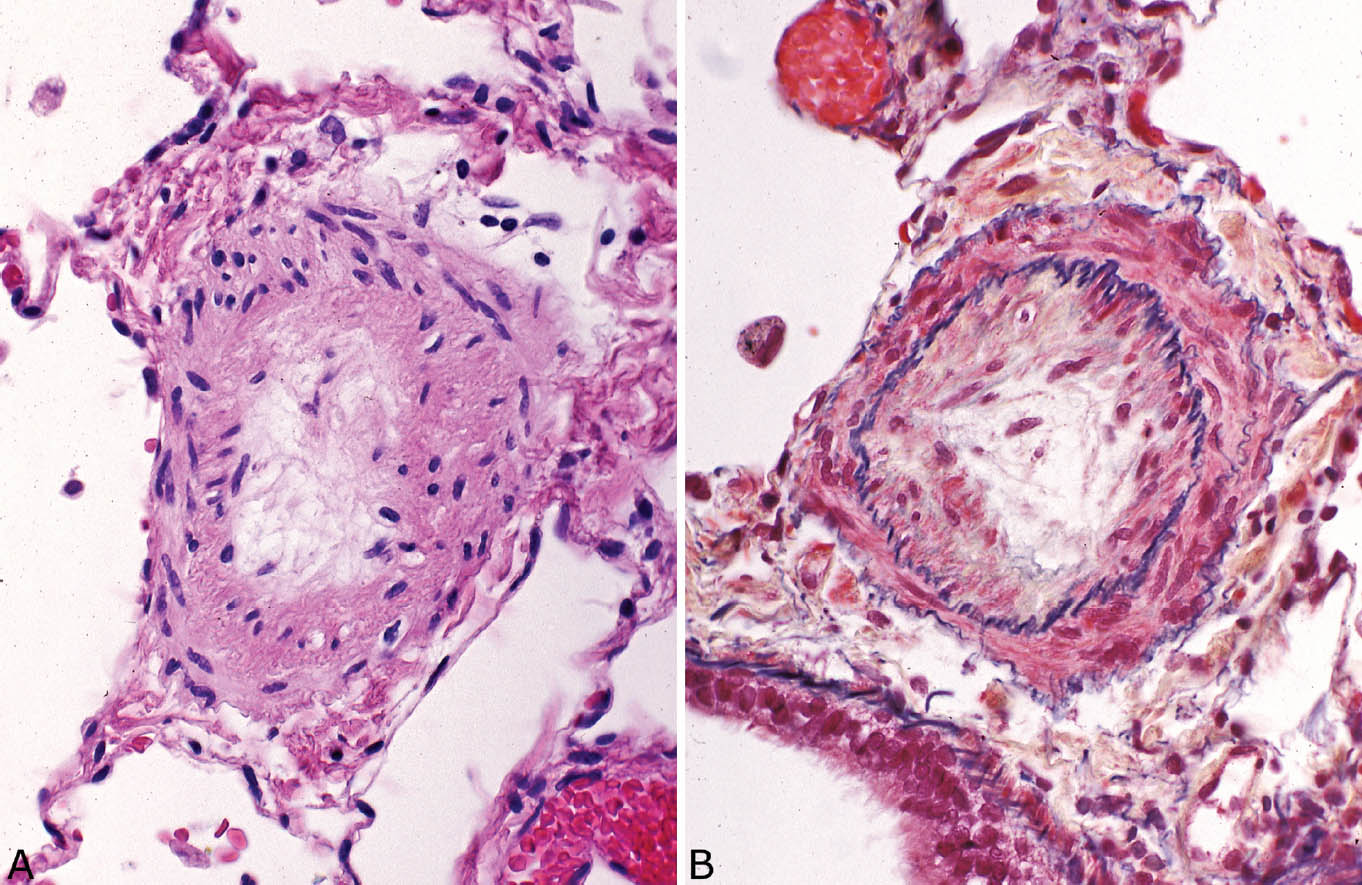 FIGURE 10.5    Severe pulmonary hypertension. (A) In this example, the lumen of a small artery, confirmed in an elastic tissue stain by the presence of two elastic layers (B) is entirely obliterated by intimal fibrosis. 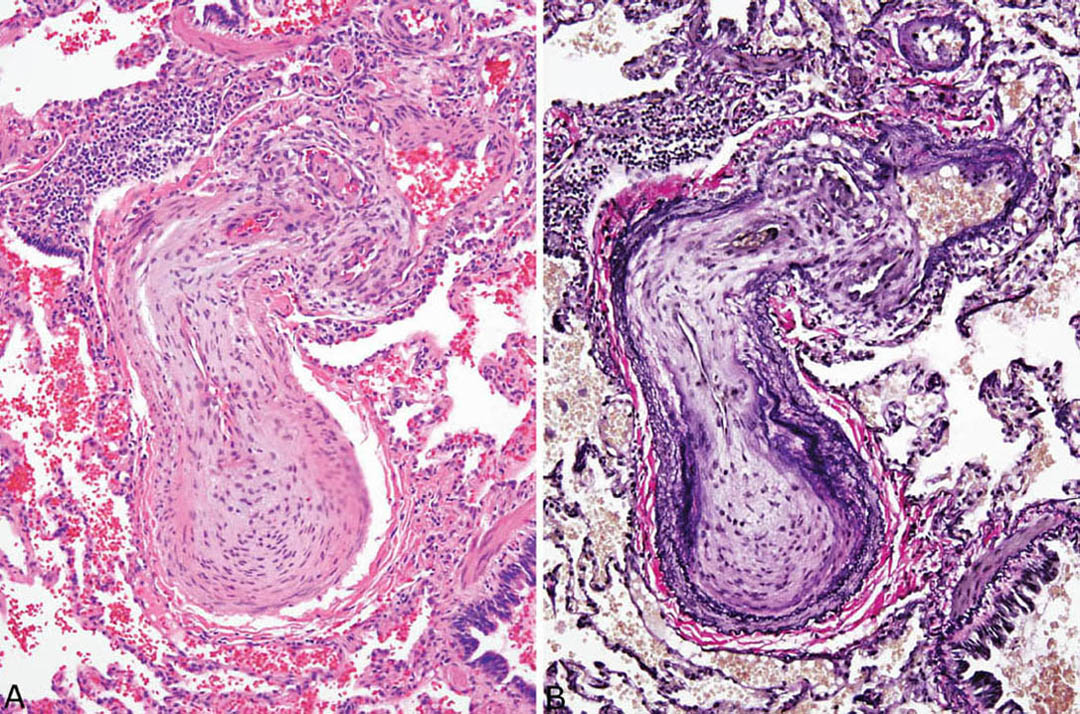 FIGURE 10.6    Plexiform lesion in severe pulmonary hypertension. (A) In H and E, concentric intimal (“lamellar”) fibrosis causing near luminal obliteration is seen in the proximal (bottom) portion of this artery, whereas a plexiform lesion with multiple small vascular spaces is seen distally (top). (B) In an elastic stain, the plexiform lesion at top is seen to arise from an aneurysmal outpouching of the artery wall, and the marked intimal proliferation in the proximal (bottom) artery is highlighted. H and E, hematoxylin and eosin. 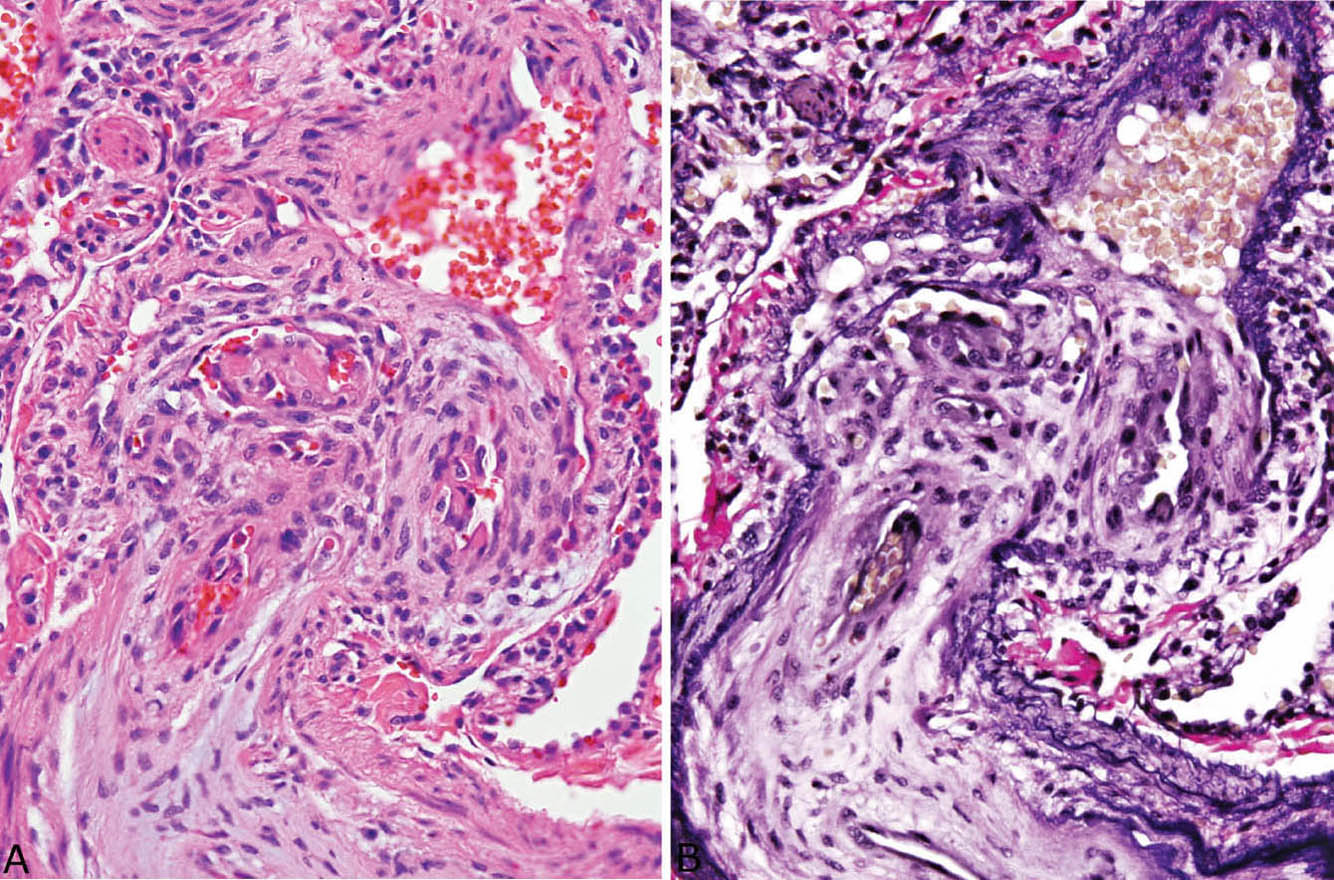 FIGURE 10.7    High magnification of plexiform lesion shown in Figure 10.7. (A) In H and E, the multiple small vascular spaces, some containing fibrin thrombi, are seen. (B) An elastic stain highlights the destruction of the artery wall with loss of elastic layers proximal to the plexiform lesion. H and E, hematoxylin and eosin. 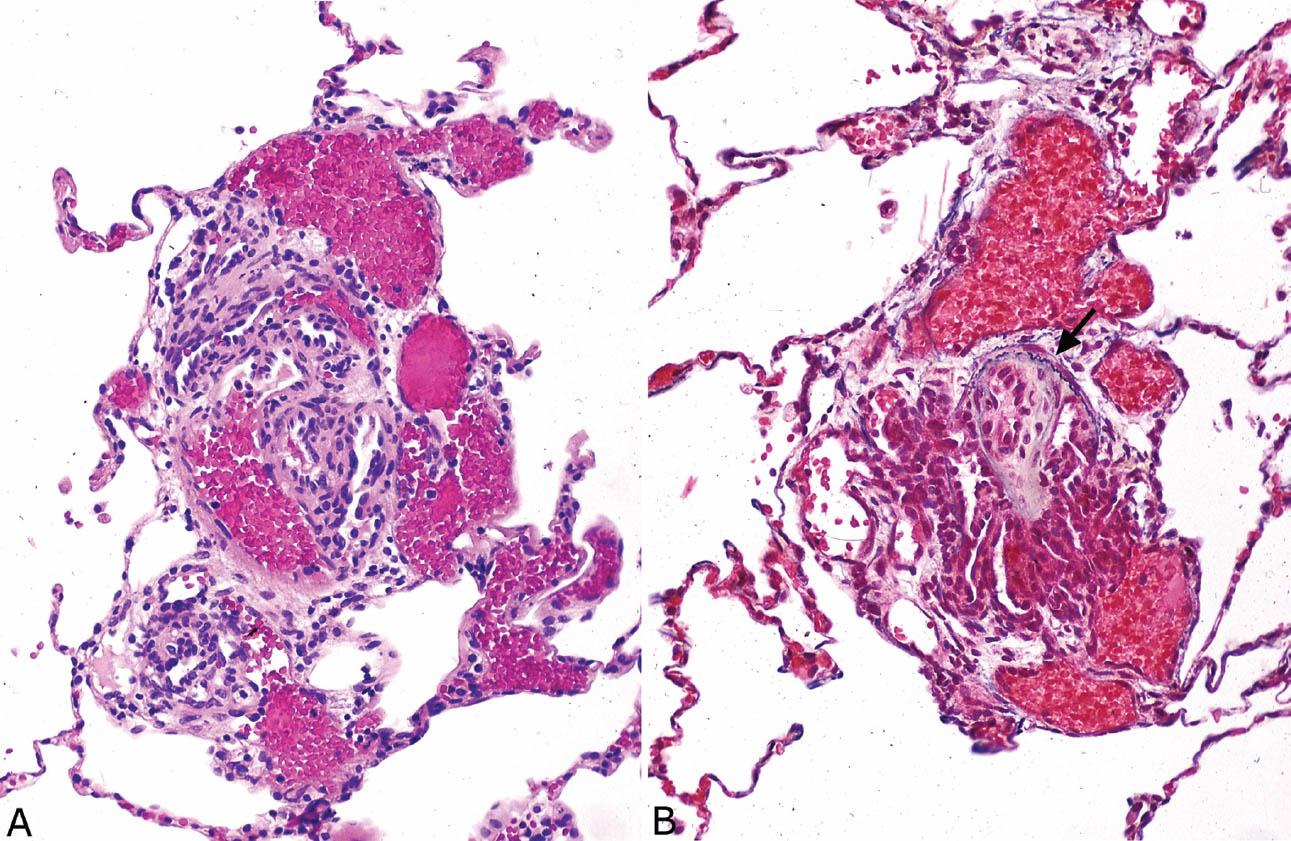 FIGURE 10.8    Angiomatoid and plexiform lesion in severe pulmonary hypertension. (A) In H and E, a proliferation of tiny thick-walled vascular spaces indicative of plexiform lesion is present around a small artery (center), and dilated thin-walled, blood-filled vascular spaces indicative of an angiomatoid (dilatation) lesion are present on the periphery. (B) An elastic stain shows the double elastic layer of the central artery (arrow) and highlights the surrounding plexiform and angiomatoid lesions. H and E, hematoxylin and eosin. 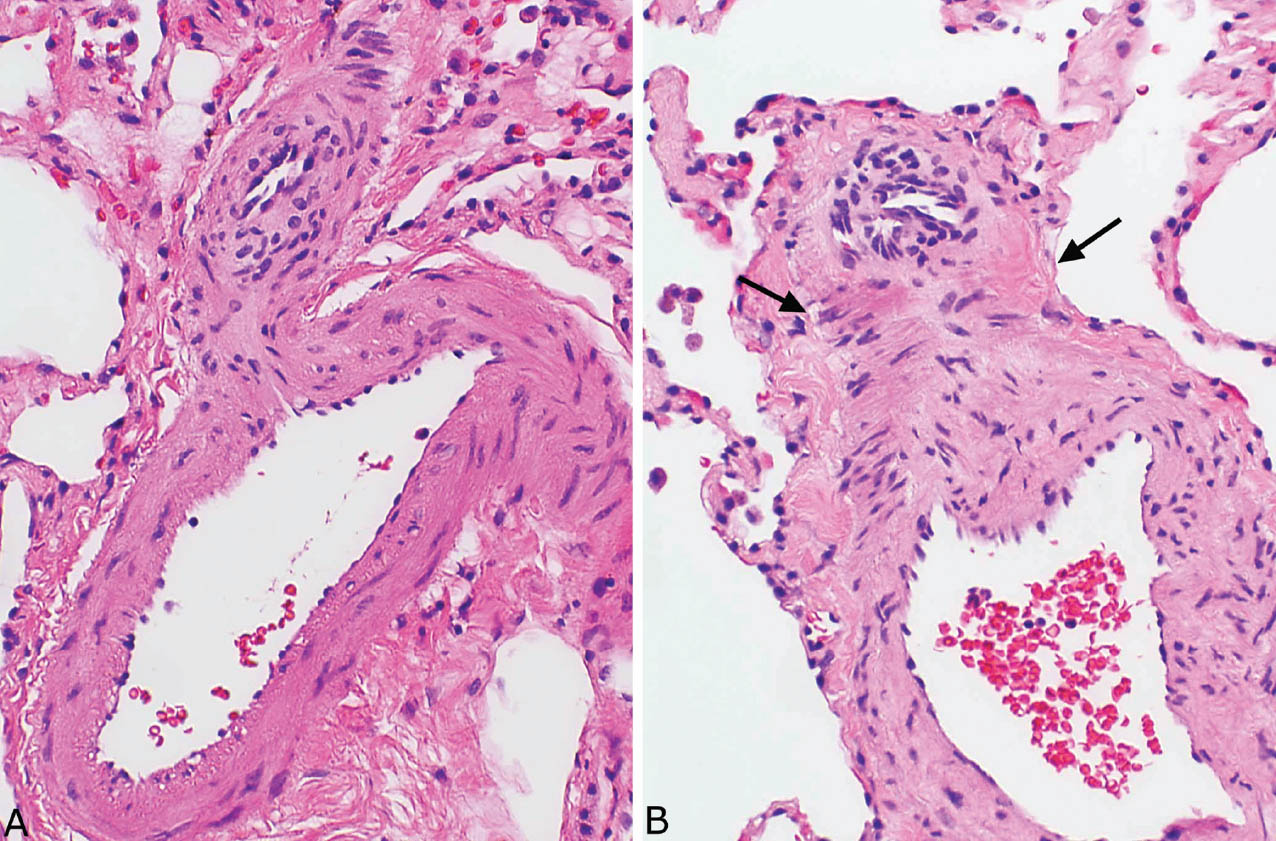 FIGURE 10.9    Early plexiform lesion in severe pulmonary hypertension. (A) In this example, a single outpouching from a branch point in a muscular artery is seen. Note the reactive endothelial cells surrounded by smooth muscle and intimal hyperplasia. (B) Several small vascular spaces with prominent reactive endothelium are formed from this branch point. Note also adjacent early fibrinoid necrosis (arrows) in the wall of the parent artery.

As medial thickness is affected by many external variables, pulmonary hypertension should not be diagnosed based on medial hypertrophy alone unless it is severe and associated with extensive luminal narrowing.

Look for muscularization of arterioles to confirm mild to moderate pulmonary hypertension when medial hypertrophy of muscular arteries is the only other finding.

Although plexiform lesions are indicative of severe pulmonary hypertension, they are not present in all cases.

Examine multiple slides when pulmonary hypertension is suspected, as hypertensive vascular changes may be patchy and even absent in some slides.

The main causes of pulmonary arterial hypertension are listed in Table 10.4 and discussed in the following sections. 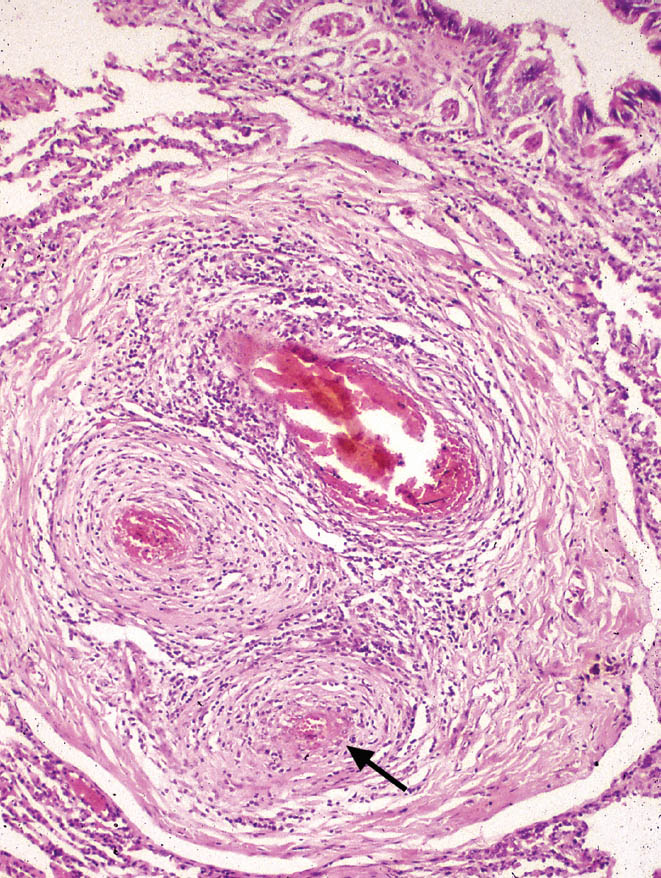 FIGURE 10.10    Necrotizing arteritis in severe pulmonary hypertension. There is severe, transmural acute and chronic inflammation along with fibrinoid necrosis (arrow) in this artery. The accompanying bronchiole is at top right.

PPH is rare. Biopsies are not often performed because morbidity and mortality are considerable and subsequent lung transplantation may be compromised. A few cases, however, that are unsuspected clinically may undergo biopsy.

Absent other findings that would indicate an underlying etiology

Histologically, the findings are those of severe pulmonary hypertension, as outlined in the previous section, “Grading of Pulmonary Hypertension” (Figures 10.4–10.10). Although plexiform lesions are a histologic hallmark of PPH, they are not present in every case, and they may be focal findings. Sometimes severe intimal, often concentric, fibrosis with luminal occlusion of small arteries is the main finding.

Small thrombi in various stages of organization may be present in occasional arteries in some cases of PPH, but they are overshadowed by the severe hypertensive changes present in other arteries. The presence of small thrombi has prompted some pathologists to lump together PPH and thrombotic pulmonary hypertension (see subsequent section, “Thrombotic/Thromboembolic Pulmonary Hypertension), although the clinical and pathologic findings differ between the two entities (Table 10.3). Because small thrombi can also be seen in cases of severe pulmonary hypertension due to known causes, such as left to right shunts, for example, they are considered incidental findings in PPH.

Clinically, PPH affects women about twice as often as men, with a mean age in the fourth decade. Most patients present with exertional dyspnea; fatigue, dizziness, and syncope are common. Mortality is high with 5-year survival rates of only 25% to 50%.

A small percentage of PPH cases are familial. A mutation in the coding region of the gene for bone morphogenetic protein receptor 2 (BMPR2) is present in half of familial cases and about one quarter of sporadic cases.