A variety of symptoms may occur in the patient with the pectus excavatum defect, or the patient may have no symptoms but a clinically apparent anterior wall depression. In our practice, it is infrequent that preschool-aged or early school-aged children are evaluated. However, children in the early school years with a clinically apparent pectus excavatum may present for evaluation. These younger children frequently have few complaints in terms of exercise intolerance or chest wall pain.

The more typical patient is the preadolescent or a child in the early teenage years, frequently with the new appearance and progression of symptoms that may be associated with the chest wall abnormality. Most, but not all, patients will report some increasing dyspnea on exertion, particularly with low-intensity, long-duration exercise such as distance running, swimming, rowing, or bicycle riding as compared to anaerobic exercises where high-intensity, short-duration muscle activity is needed, such as sprinting or weightlifting. Often, the patient will report that they can sprint without problem but middle distance running will often lead to early fatigue and exhaustion. Shortness of breath at rest is very atypical in this age group and may need additional cardiac and pulmonary evaluation.

Finally, body image issues in this particular teenage and young adult age group should not be ignored and the psychosocial pressures can be significant to the point that it is often life altering (“I won’t take off my shirt.”; “I am considering not having children.”; “I have stopped playing sports.”) to infrequent, but worrisomely life-threatening, concerns (“I can’t live like this.”).

A past history of known metal allergy or adverse reaction to jewelry should alert the clinician that a nickel allergy may be present. Nickel is a component of the stainless steel pectus bar and has been identified as an allergen. The potential adverse effects include an erythematous macular rash, the development of excessive granulation tissue at the surgical sites, wound separation, and pleural effusions. For patients with known nickel allergy, individualized preshaped titanium pectus bars can be manufactured for correction of the symptomatic chest wall defect but must be ordered before surgery can be scheduled. These titanium bars are more brittle and should not be reshaped at the time of the operation.

Physical examination often demonstrates typical findings including the posterior deflection of the sternum that may involve the lower sternum or involve the entire sternal body below the manubrium. Many times, the defect is asymmetrical, typically with the greater depression seen on the right side. There is often some costal flaring, which needs to be pointed out to the patient and family as that may become more prominent after surgical correction using the Nuss technique. The shoulders are frequently inturned. The surgeon should listen carefully for a systolic click, which may indicate mitral valve prolapse. Additional skeletal abnormalities including scoliosis or kyphosis should be noted. Other clinical signs including a high-arched palate, crowded teeth, poor vision, abnormal long arms, joint laxity, or striae without recent weight gain or loss with an associated chest wall defect may be seen with Marfan syndrome. Measurement from the midaxillary line to midaxillary line at the point of greatest chest depression should be recorded as that measurement helps to determine the length of the pectus bar used during the surgical correction. The pectus bar length is often 2 to 3 cm less than the midaxillary to midaxillary line measurement. 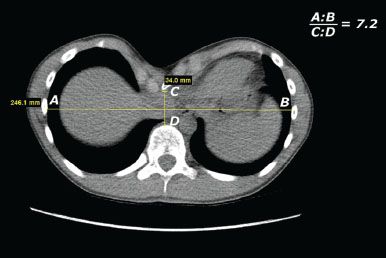 Figure 13.1 Axial CT imaging at point of greatest sternal depression to determine Haller index. The internal transverse measurement is divided by the internal anteroposterior measurement from the sternum or parasternal tissue to the anterior border of the vertebral body.

Imaging studies have proven the most helpful in determining whether surgical correction should be recommended. The Haller index, a CT-derived measure, is generally accepted as the most accurate measurement of the severity of the chest wall defect. This CT scan of the chest without contrast allows the surgeon and radiologist to determine the internal transverse diameter of the chest at the point of greatest depression as well as the anteroposterior distance from the retrosternal or parasternal point of greatest depression to the anterior vertebral body (Fig. 13.1). The general population without a chest wall defect will have a Haller index of 2.5. Although authors vary at the Haller index value where they would recommend surgical correction, an index greater than 3.25 is used in our institution. In the asymptomatic patient, an abnormal Haller index alone is not an indication for surgical repair. However, most patients are experiencing symptoms before presenting to the pediatric surgeon or thoracic surgeon for evaluation of the chest wall defect.

If the Haller index is greater than 3.25, an echocardiogram is performed to look for aortic root dilatation or mitral valve prolapse. The presence of mitral valve prolapse is an indication for surgery, as this valvular abnormality may disappear following correction. If aortic root dilatation is found, evaluation by cardiology and genetics is performed before we recommend surgical correction. Significant compression of the heart chambers by the pectus defect is also considered an indication for surgery.

Exercise pulmonary function tests are performed, which we feel more accurately reflect the cardiopulmonary effects associated with the pectus excavatum defect. The vast majority of children will show low, normal, or below normal values, particularly in oxygen delivery and cardiac output with exercise. Below normal values on the exercise stress test makes a strong argument that correction of the chest wall defect is indicated.

A similar preoperative evaluation will be performed for adult patients or patients with recurrent pectus excavatum defects who are being considered for repair.

Generally, we do not recommend repair of a pectus excavatum defect in the preschooler or elementary school-aged child. The classic open repair in this age group is contraindicated because of the potential of the abnormal chest wall scarring and secondary thoracic chondrodystrophy. While this abnormal scarring does not seem to be an issue in patients following the Nuss repair, our concern for retrusion during the adolescent growth spurt leads us to recommend repair at the beginning of the growth spurt (ages 8 to 12) with the expectation that correction and stabilization of the chest wall during the growth spurt would be ideal. However, a more typical patient who first presents to our practice would be a teenager who has completed his/her growth spurt and noted either new appearance of the pectus defect or significant worsening of the chest wall depression. 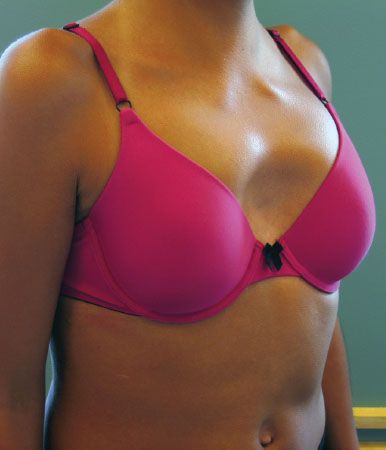 For some chest wall defects, the Nuss repair without removal of parasternal cartilages may result in unsatisfactory outcome. The Silverman–Currarino syndrome, or pouter pigeon chest wall deformity (Fig. 13.2), is a rare anomaly, often associated with congenital cardiac defects that requires an open correction of the superior pectus carinatum portion of the mixed chest wall defect while the Nuss repair can be used to support the lower sternal pectus excavatum defect. The etiologic cause of the sternal abnormality is believed to be related to premature fusion of the manubrial–sternal junction in addition to early fusion of other sternal elements that may result in a foreshortened sternum.

In most patients, an epidural catheter is placed for intraoperative and postoperative pain management. The patient is returned to the supine position and induced with general endotracheal anesthesia. While other centers prefer the patient in a simple shoulder abducted position on boards, our preferred position for a standard repair is with the arms elevated and flexed over the head, placed either in an arm cradle or attached to a padded ether screen.

After an appropriate patient position has been obtained, the chest and lateral chest walls are sterilely prepped and draped from above the sternal notch to below the costal margins. We use an iodophor-impregnated adhesive drape to cover this wide surgical field and hold the underlying sterile towels in place.

Before the procedure begins, the surgical team selects the intercostal spaces for the planned bar placement close to the point of greatest sternal depression. If a single bar is planned, 4- to 6-cm lateral chest wall incisions from the anterior axillary line to the midaxillary line are made simultaneously at the point of greatest depression. It has been our practice to use a two-team approach with surgeons working on both sides of the thorax simultaneously. This lateral chest wall dissection typically brings us directly onto the serratus anterior muscles while being anterior to the latissimus dorsi muscles. Subcutaneous pockets are created above the fascia of the serratus muscles, extending in a cephalocaudad (vertical) direction for the later placement of the stabilizing bars. Once the lateral pockets are of adequate size, we dissect anteriorly in the subcutaneous plane above the muscular fascia to the tip of the pectus ridge. In most cases, this dissection is at the inferior margins of the pectoralis major and pectoralis minor muscles.

Although we have used bilateral thoracoscopic guidance, particularly with severe pectus excavatum defects, in most cases we will place a single right-sided 5-mm Thoracoport for thoracoscopic visualization of the anterior mediastinal dissection and placement of the pectus bar. The right side port placement is chosen to direct the dissection as the depressed left sternal border is obscured by the heart and pericardium. This right-sided port is introduced inferior to the right-sided subcutaneous pocket, typically in the eighth intercostal space. A 5-mm 30-degree-angled thoracoscope placed into the right chest provides good field visualization for the procedure (Fig. 13.3). 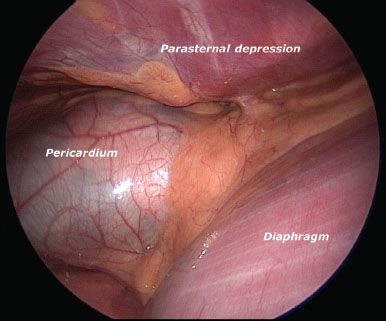