A 69-year-old male with a history of peripheral arterial disease, coronary artery disease, hypertension, and carotid artery stenosis, who underwent right carotid artery stenting (CAS) 4 years prior to presentation, follows up for routine carotid duplex ultrasound surveillance. He denies any history of transient ischemic attack (TIA), stroke (CVA), or amaurosis fugax. On physical examination, he has no carotid bruits and is neurologically intact. 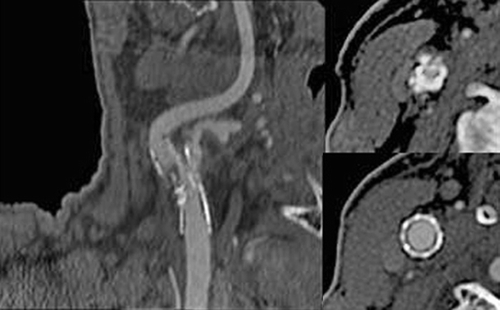 Figure 2 CT angiogram revealing the right carotid stent with encroachment of the stent within the lumen in the central portion causing a high-grade stenosis with intraluminal thrombus. Cross-sectional images reveal severe intrusion of the stent in the midportion compared to the edges.

The patient has an asymptomatic recurrent high-grade in-stent stenosis of the right ICA after previous CAS. Other less likely disease processes that may account for the restenosis include carotid body tumor, carotid artery dissection, trauma, aneurysm, or fibromuscular dysplasia. However, given the history of CAS and high-grade in-stent restenosis, carotid artery restenosis is more likely. In symptomatic patients, the differential diagnosis for a TIA or cerebrovascular accident (CVA) following carotid intervention includes recurrent stenosis from myointimal hyperplasia or progressive atherosclerosis, embolic phenomenon (atrial fibrillation or other cardiac causes), or vasculitis.

Restenosis is a serious complication after carotid intervention. Following carotid endarterectomy (CEA), the incidence of restenosis is between 5% and 20%, which is only symptomatic in less than 5% of patients. Within the first 3 years, recurrent stenosis is typically from intimal hyperplasia. Lesions that typically develop after this time are more often due to advancing or de novo atherosclerotic disease. Recurrent stenosis is more common in women, those who continue to smoke, and patients with diabetes, hypercholesterolemia, or hypertension.

Restenosis after carotid intervention is frequent when only balloon angioplasty is performed, as reported in the CAVATAS trial with 14% 1-year restenosis compared to 1% after CEA. In more recent studies, in which routine stenting is performed, similar rates of restenosis between CAS and CEA are reported, usually in the range of 0.6% to 18%. Patients who undergo CAS for recurrent stenosis after CEA, or have a history of neck irradiation or cancer, appear to be at higher risk.

Diagnosis of restenosis after CAS requires careful assessment. Ultrasound criteria for restenosis after CAS are different from nonstented arteries because of the inherent effects the stent has on the artery, and the type of stent. Vessel compliance is decreased and frequently alters the ultrasound flow velocities. Stent design may also affect blood flow velocities, with open cell stents more likely to remain closer to normal velocities due to less of an effect on compliance. New modified criteria have been proposed after CAS; however, no standardization has been adopted. Peak systolic velocities over 300 cm/s and ICA/CCA ratio over 4.3 have been found to be consistent with stenosis greater than 70%. Careful examination with B-mode and color Doppler can also elucidate luminal narrowing. Carotid duplex ultrasonography should be sought after 1 month postprocedure for a new baseline and then v every 6 months for the first 2 years, when intimal hyperplasia is more likely, then yearly thereafter.

Recurrent stenosis after CEA can be treated with either redo CEA or CAS. Redo CEA is associated with a stroke risk of 3% to 5% and carries a higher risk of cranial nerve injury. Accordingly, CAS has become a popular treatment modality for recurrent stenosis after CEA avoiding the risk of cranial nerve injury and a general anesthetic. However, there are complications associated with CAS, including bradycardia and hypotension after balloon dilatation and stent placement. Because of the ability to avoid anatomic and physiologic constraints, such as history of cranial nerve injury, neck immobility, neck irradiation, tracheostomy, previous neck surgery, or high lesions, CAS is now considered first-line therapy for carotid stenosis among anatomic high-risk patients.

The decision to treat a patient with carotid restenosis is not straightforward as the majority of patients are asymptomatic. Global perfusion, contralateral carotid flow, severity of symptoms, medical comorbidities, interval since carotid intervention, and rapid progression need to be considered to define the type of treatment. Asymptomatic low- and moderate-grade stenoses are typically treated with antiplatelet agents and serial surveillance ultrasonography. Historically, symptomatic or high-grade (>80%) stenosis, especially in those with contralateral occlusion, has been treated with repeat intervention. Lesions caused by myointimal hyperplasia are thought to have a lower risk of embolism and can regress, and therefore, reintervention during the first 2 to 3 years is typically avoided in the absence of symptoms. Angiography is an important part of the evaluation of patients with restenosis and allows accurately characterization of lesions.

The majority of in-stent restenoses are treated with balloon dilatation with regular or cutting balloons. At each treatment, reinitiating double medical therapy with aspirin and Plavix is recommended. Uncommonly, restenting is required for lesions that do not respond to angioplasty alone, or stenoses at or beyond the edges of the stent. In cases where percutaneous intervention is unsuccessful, or the patient is at high risk for embolization, open endarterectomy with explantation is recommended. Care should be given to avoid any manipulation of the carotid bifurcation to avoid embolization. According to recent observational studies, triple antiplatelet therapy with aspirin 325 mg for life, clopidogrel 75 mg for a month, and cilostazol 100 mg twice daily for 3 months may be given to decrease the likelihood of further restenosis after CAS for recurrent stenosis, especially if associated to prior irradiation, neck cancer, or previous CEA restenosis. Randomized clinical trials supporting this regimen are still missing.

The patient is admitted and placed on intravenous heparin. The likely presence of intraluminal thrombus makes endovascular management with percutaneous angioplasty a less attractive alternative of treatment. A CEA with explantation of the carotid artery stent and patch angioplasty is performed under general anesthesia with arterial monitoring via a radial arterial line. Intraoperative plain x-ray films are taken showing severe intrusion of the stent from external compression (Fig. 3). The neck is prepped and draped, and an incision is made along the anterior border of the sternocleidomastoid muscle (SCM). The platysma is divided, and the SCM is retracted laterally, allowing visualization of the internal jugular vein (IJV). The facial branch is ligated, and the IJV is retracted laterally. Because of the intraluminal thrombus, carotid manipulation is kept to a minimum, and the patient is heparinized (100 U/kg) with a goal of an activated clotting time (ACT) >250. Careful dissection allowing control of the CCA, external carotid artery (ECA), and ICA with vessel loops is performed. After raising the systolic blood pressure to >140 mm Hg, clamps are placed sequentially on the ICA, ECA, and CCA. A stump pressure is checked and found to be 35 mm Hg. Dissection of the carotid bulb and an arteriotomy are performed, which required transection of the stent from the CCA to ICA (Fig. 4). A #8 Argyle shunt is placed and flow confirmed with a handheld Doppler probe. The endarterectomy is performed starting in the CCA toward the ICA. An eversion endarterectomy of the ECA is also performed with good back bleeding. Endarterectomy allows removal of the carotid stent with thrombus noted in the lumen until a good distal end point is identified. All debris is removed. A bovine pericardial patch is sewn in with fine monofilament suture. Prior to completing the repair, the shunt is removed, and back bleeding of the ECA and ICA, as well as forward bleeding of the CCA, allows removal of any debris or air. The patch is completed, and an intraoperative duplex study is performed ensuring there are no flaps. The heparin is partially reversed, and the incision is closed. The patient is awakened, and prior to extubation, he is noted to be neurologically intact. His neurologic exam and blood pressure are monitored in the intensive care unit for 24 hours, prior to discharge. He is sent home on aspirin as antiplatelet therapy (Table 1).