A 76-year-old male presents with a 2-year history of recurrent transient ischemic attacks (TIAs) and cerebral vascular accidents (CVAs) despite combination therapy with aspirin, clopidogrel, and warfarin. He has residual right-sided weakness and right eye blindness from a CVA 2 years ago. His medical history is significant for prostate cancer with urinary retention, hypertension, dyslipidemia, and rectal prolapse for which he underwent a Hartmann’s procedure. Current medications include aspirin, clopidogrel, warfarin, lovastatin, losartan, and terazosin. His mother has a history of a stroke, and his father died of a myocardial infarction. He is a former 40-pack-year smoker and does not drink. On physical examination, his vital signs are notable for a sinus heart rate of 77 beats per minute, blood pressure of 148/82 mm Hg, and no murmurs on auscultation. Peripheral pulses are intact and equal bilaterally. His carotid arteries are notable for an absence of bruits. He has decreased strength in his right arm and leg, but is otherwise neurologically intact.

Multiple and recurrent TIAs or CVAs are concerning for an embolic phenomenon rather than a hemorrhagic one. Common etiologies include atheroembolism from calcific plaques, embolic events from atrial thrombus in the setting of atrial fibrillation or from systemic venous thrombus via a septal defect, or inflammatory arteritis. The persistent deficits help to localize the potential source, as distal emboli or inflammatory conditions are more likely to be bilateral. The absence of other symptoms associated with arteritis also makes the latter less likely.

Further questioning reveals no prior fevers, fatigue, weight loss, or arthralgia. He has no history of prior radiation exposure or vasculitis, nor any family history of vasculitis. Aside from the residual weakness and right eye blindness, he demonstrates no neurologic deficits.

Evaluation of a cardiac or distal embolic source can be accomplished with an electrocardiogram (EKG) to assess for atrial fibrillation or other arrhythmia and an echocardiogram to detect mural thrombus or septal defects. Imaging studies including duplex ultrasound or cross-sectional imaging (computed tomography angiography [CTA] or magnetic resonance angiography [MRA]) with intravenous contrast enhancement are also of benefit in identifying an offending stenotic plaque or ulceration.

Duplex ultrasound of the bilateral carotid arteries and their bifurcations will detect narrowing of these vessels, most commonly at the internal carotid artery. However, added value is obtained from imaging the origins of these vessels and the aortic arch, as arteriosclerotic disease at this location can contribute to the above symptoms and are best identified prior to planning any operative intervention. Angiography for evaluation of carotid or aortic arch disease can be done if other imaging modalities are inconclusive. However, it should not be the first-line assessment tool as it carries the risk of showering emboli distally with wire and catheter manipulation. With cross-sectional or angiographic techniques, the images should be extended cephalad to capture the circle of Willis, as its patency may affect operative planning, especially if the carotid or vertebral circulation is affected by arteriosclerosis.

The patient underwent an EKG and echocardiogram that demonstrated normal sinus rhythm, an ejection fraction of 60%, and no evidence of septal defects or valve disease. In addition, a dobutamine cardiac stress test showed a mild reversible defect in the anterior left ventricle. A CTA of the head and neck revealed 50% stenosis of the left internal carotid artery with an irregular lumen concerning for ulcerated plaque (Fig. 1A). The dominant left vertebral artery demonstrated distal stenosis, as did the basilar artery. Several old and small embolic infarcts were seen. Evaluation of the aortic arch demonstrated bovine-type anatomy with a shared origin of the brachiocephalic and left common carotid (LCC) arteries rife with calcific changes and a high-grade stenosis (Figs. 1B and 2). The right carotid system demonstrated minimal atherosclerotic changes without narrowing. 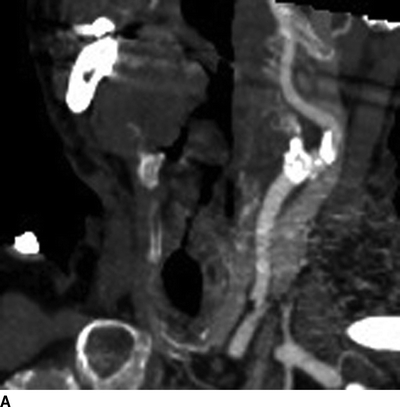 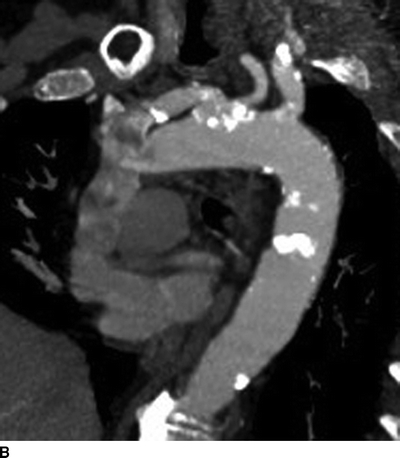 FIGURE 1 CTA of the great vessels demonstrating significant calcific deposits in the LCC artery (A) and at the bovine-variant origin of the innominate and LCC arteries (B). 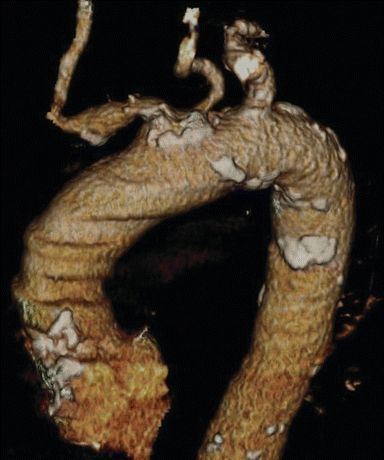 Arteriosclerosis of the great vessels is the most common pathology requiring intervention, followed by Takayasu’s arteritis and radiation-induced arteritis. Still, the vessels of the root of the arch are involved in only 7.5% of cases, far less commonly than the carotid arteries at their bifurcation or the vertebral arteries. The prevalence of arteriosclerosis is greater in men and in younger persons with a median age of 50 to 61 years. Operative planning should include examination and planned repair of multiple supra-aortic lesions, as these can be seen in 60% to 80% of patients with innominate disease.

Symptomatic lesions manifest as either cerebral or upper extremity ischemic episodes and warrant repair. Asymptomatic lesions of the common carotid arteries may be repaired using the same criteria as for bifurcation disease. If upper extremity arterial insufficiency due to stenosis hinders formation or function of dialysis access or extra-anatomic bypass grafts, repair may also be considered. Finally, correction of otherwise asymptomatic lesions should be considered if a sternotomy is required for treatment of alternate pathology to avoid reentering the field at a later time. However, as the perioperative morbidity for this operation is not small, the risks must be weighed carefully, and surgical intervention for asymptomatic lesions in the absence of the above caveats is not recommended.

Options for repair of the great vessels include direct reconstruction and extra-anatomic bypass. Extra-anatomic procedures, including subclavian-carotid, carotid-subclavian, carotid-carotid, and axillary-axillary bypasses, were developed as alternates to the perioperative morbidity and mortality of a median sternotomy. However, the improved outcomes of sternotomy and direct repair and concerns about long-term patency of extra-anatomic repairs other than the carotid-subclavian or subclavian-carotid bypasses have shifted interest back toward direct arch repair.

The presenting symptoms in this case may be related to either the left carotid bifurcation disease or the ulcerated plaque at the bovine origin of the innominate and LCC. Both can be addressed with a single operative approach. As a part of the preoperative workup, coronary artery disease was evaluated. Should the patient have significant coronary lesions, coordination of repair in conjunction with coronary bypass or angioplasty may be necessary. For this patient, this is not necessary, and proceeding to operative repair is appropriate.

Patient positioning optimizes exposure. After appropriate monitoring devices and access are obtained, the patient is placed in supine position with the arms tucked to allow surgeon access to the operative field. A roll placed vertically between the shoulder blades aids with exposure and allows extension of the head. Rotation of the head is dictated by the planned procedure; access to the innominate, right common carotid, and right subclavian arteries can be accomplished with the head rotated to the left slightly, whereas access to the left-sided vessels requires the head be prepped in order to be rotated intraoperatively. The sterile field should extend to the upper abdomen.

The decision to shunt during the procedure can be made based on preoperative imaging of the circle of Willis. Alternatively, intraoperative adjuncts, such as electroencephalography, cerebral oximetry, or carotid artery stump pressures, may guide decision making. Criteria similar to that used during carotid endarterectomy should be employed. The use of neuroprotective anesthetics may also be desired. If bilateral carotid artery repair is indicated, the more diseased vessel should be repaired first to preserve intracranial blood flow.

A midline incision with partial or complete sternotomy is performed and is extended in a hockey stick fashion along the anterior boarder of the right sternocleidomastoid muscle to expose the bifurcation of the innominate artery. A sternal retractor is placed. If the procedure requires access to the right carotid bifurcation, the incision can be extended superiorly. The LCC artery may be accessed through the primary incision, while access to the bifurcation is obtained via a separate incision. Exposure of the innominate artery and its branches can be accomplished with either division or mobilization of the left brachiocephalic vein.

Initial anastomosis to the ascending aorta begins with placement of a side-biting clamp as far laterally as is possible. A vertical aortotomy is made, and an 8- or 10-mm Dacron graft is spatulated and anastomosed with a running suture. If a branched configuration is necessary, side-arms can be added to the graft intraoperatively with a similar or smaller graft. This serves to reduce mediastinal bulk that can result from prefabricated branched grafts with larger proximal components and allows optimal positioning of the side-arm. Relaxation of the sternal retractor allows visualization of the mediastinum as it will lie upon closure. Once the proximal anastomosis is complete, the graft is occluded and the aortic clamp is carefully released. Hemostasis can be aided by placement of simple interrupted sutures. Once this is satisfactory, the patient is systemically heparinized.

Construction of the distal anastomosis begins with clamp placement on the innominate branches prior to placing the proximal clamp to prevent distal embolization. Preoperative imaging and intraoperative palpation of the arteries help to identify suitable sites for clamp placement. The graft may be tunneled posterior to the left brachiocephalic vein if left intact. In addition, branching grafts to the left carotid bifurcation may be tunneled anterior to the common carotid artery. If both carotid arteries require reconstruction, preference is given to the more stenotic lesion.

Once the anastomoses are complete, clamps are released beginning with the subclavian, then the aortic, and finally the carotid. This minimizes risk of emboli to the cerebral circulation. Heparin may be reversed. Closure proceeds with hemostasis and placement of chest or mediastinal tubes as indicated, followed by sternal reapproximation with wire and layered closure of the soft tissues and skin.

During dissection, care must be taken to identify and preserve the vagus, recurrent laryngeal, and phrenic nerves. While direct injury is less common, stretch injury of the brachial plexus can occur with improper patient positioning. Pneumothorax of hemothorax may occur if the thoracic cavity is violated during the procedure. Lymphatic structures, particularly the thoracic duct, deserve careful attention, as lymphatic leak and chylothorax may result. Additional consideration for clamp placement is needed in patients who have undergone coronary artery bypass grafting with the use of the internal mammary artery. Careful dissection and clamp placement can reduce the risk of distal emboli from plaques. Similarly, thoughtful release of clamps can reduce the risk of showering debris to the cerebral circulation.

The patient was taken to the operating room, and a sternotomy with a hockey stick extension along the right sternocleidomastoid muscle was made. A second incision along the anterior left sternocleidomastoid muscle was also created. A 10-mm Dacron graft was anastomosed in an end-to-side fashion from the ascending aorta, and an 8-mm Dacron side-arm was added.

In consideration of the significant calcific disease of the left carotid system, this was addressed first. The internal and external branches of the carotid artery were clamped prior to dissecting the tunnel and bringing the graft into the lateral incision to prevent distal embolization of the friable plaque. The proximal carotid was then clamped, the internal carotid artery was dissected off of the plaque, which really encompassed most of the common and external branches, and a graft to artery anastomosis was performed in an end-to-end manner.

Next, the innominate artery and its branches were controlled, and the graft was sewn to the spatulated distal innominate artery, again in an end-to-end configuration (Fig. 3). The proximal innominate artery was clamped, transected, and oversewn in two layers with a horizontal mattress followed by a running over-and-over suture. The wound was closed over mediastinal drains. The patient underwent neurologic evaluation following extubation and remained intact (Table 1). 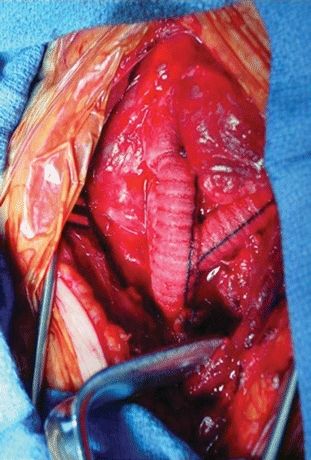