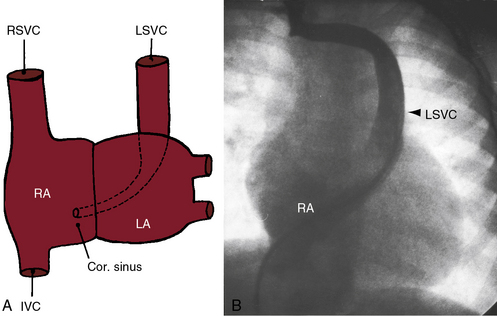 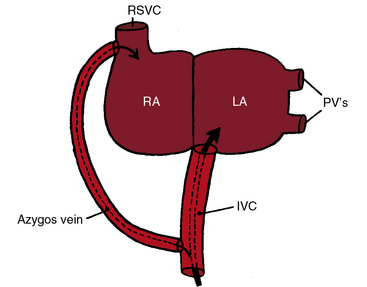 Inferior vena caval interruption with azygous continuation is rare as an isolated malformation and is of no physiologic significance but can be mistaken for the descending thoracic aorta (Figure 29-5).30 Interruption is immediately proximal to the renal veins and continues into a dilated azygos vein that enters the thorax to the right of the aorta, runs in the posterior mediastinum, and connects to a right superior vena cava (see Figure 29-5). There is an association with congenital absence of the portal vein.31 Inferior vena caval interruption with azygos continuation and left isomerism are dealt with in Chapter 3. 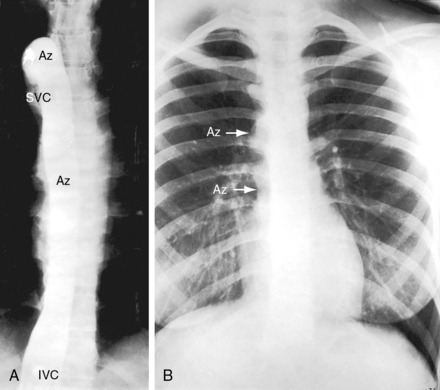 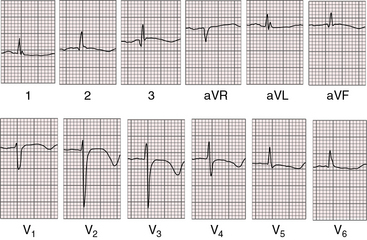 Figure 29-6 Electrocardiogram from a 28-year-old woman in whom the superior and inferior vena cavae both joined the left atrium—total anomalous systemic venous connection. A large ostium secundum atrial septal defect permitted interatrial mixing on which survival depended. The sinus node was absent because a junction between the superior vena cava and right atrium was absent. The P wave axis is directed upward and to the left, indicating an ectopic atrial focus. Broad notched P waves in leads 1, 3, and aVL reflect total caval drainage into the left atrium. The T wave abnormalities are nonspecific. 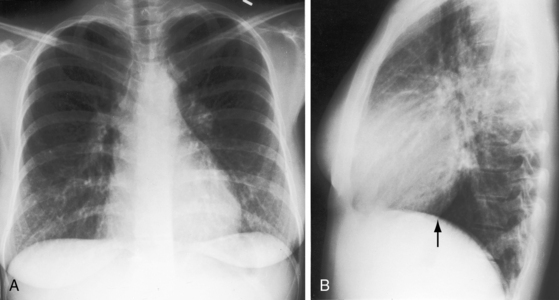 Figure 29-7 X-rays from the 28-year-old woman with total anomalous systemic venous connection whose electrocardiogram is shown in Figure 29-6. A, The size and configuration of the heart are normal. Pulmonary vascularity is not reduced. Increased markings in the left lower lung fields are superimposed breast tissue. B, In the lateral projection, the inferior vena caval shadow is absent (arrow).

When the superior vena cava and inferior vena cava both connect to the left atrium (total anomalous systemic venous connection), flow patterns are modified by obligatory mixing at atrial level. The left atrium receives blood from both cavae and from the pulmonary veins. Part of this mixture reaches the left ventricle directly across the mitral valve, and the remainder enters the right side of the heart across an atrial septal defect. Pulmonary blood flow is not increased even in the presence of a nonrestrictive atrial septal defect and normal pulmonary vascular resistance (see Figure 29-7).

The inferior vena cava normally carries about twice the volume of systemic venous return as the superior vena cava. Accordingly, an anomalously connecting inferior cava delivers a larger proportion of blood to the left atrium than an anomalously connecting superior vena cava. However, the magnitude of systemic blood flow (cardiac output) does not depend on which vena cava delivers its return to the left atrium, provided that pulmonary venous return falls by an equivalent amount.

Isolated anomalous vena caval connection to the left atrium has an equal gender distribution. Cyanosis dates from birth or infancy20,27 unless bilateral superior cavae are connected by a nonrestrictive innominate bridge (see Figure 29-2A). Despite conspicuous cyanosis, there is a paucity of symptoms.21,27 the syndrome of cyanosis and clubbing with normal heart. Adult survival is expected, with longevities recorded in the sixth, seventh, and eighth decades.12,20 Effort intolerance, dyspnea, and light-headedness develop late if at all and are generally mild.20,21 One man tolerated training in the armed forces.27 Brain abscess and paradoxical embolus have been reported.20,23