• ECG: Irregular, wide-complex tachycardia with variable QRS morphology (QRS morphology varies beat-to-beat depending on the degree of fusion between AP and the AV node [AVN] conduction).

○AVRT is a paroxysmal, regular, narrow-complex tachyarrhythmia due to a macroreentrant circuit involving the atria and ventricles, which are connected via an accessory pathway (AP).

▪ During tachycardia, a long RP interval may be observed.

▪ The baseline ECG may demonstrate evidence of pre-excitation. 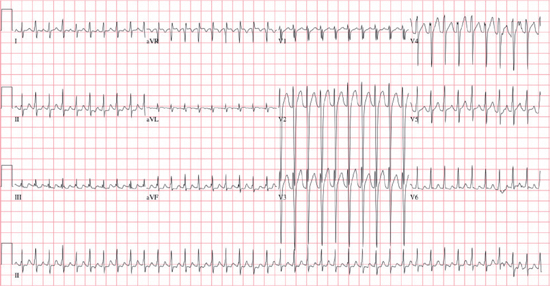 ▪ They depend on the AP location, AVN conduction time, and direction of conduction.

▪ Usually preceded by an ectopic beat (atrial or ventricular)

▪ Useful for diagnosis with episodes occurring more frequent than weekly

▪ Useful for diagnosis with symptomatic episodes occurring weekly to monthly

• Slows conduction and/or causes block over the AP

• Effective for antidromic or orthodromic AVRT

• Ineffective with pathway-pathway AVRT and pre-excited atrial tachyarrhythmias, as the AVN is not a component of circuit

• Should be avoided in atrial fibrillation (AF) with pre-excited conduction

▪ Adenosine should be avoided.


I: Should be performed; IIa: May be considered; IIb: Reasonable alternative; III: Not indicated.

▪ Chronic daily prophylaxis is used for patients with frequent symptoms.

▫ Alter the conduction through the AP and the AVN via class 1c (flecainide, propafenone) and class III (sotalol, amiodarone) AADs.

▫ AVN agents; second-line due to their lack of direct effect on the AP

▪ The “pill-in-the-pocket” strategy is used for patients with infrequent but prolonged episodes (symptomatic but stable episodes that occur less than monthly).

▪ Catheter ablation is preferred in most cases.

• 1:1 conduction between atrium and His bundle are maintained during right atrial pacing at cycle lengths (CLs) below 300 ms.

• AH prolongation ≤100 ms at the shortest 1:1 conduction when compared to the sinus rhythm value

▪ Short local AV times: The earliest ventricular (V) EGM will be observed near the AP 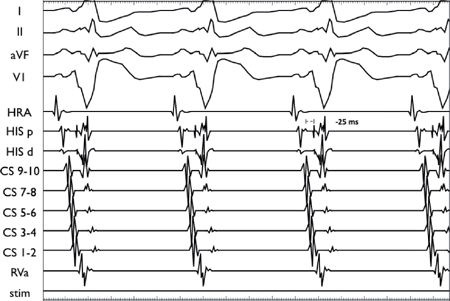 • Note: For concealed APs, the anterograde conduction will be via the AVN.

▪ Decremental conduction through the AVN with DAP results in AH interval prolongation with a relative shift in ventricular activation to favor the AP, which is associated with:

• Shortening in the HV interval (via AP)

▪ Conduction through the AP is generally non-decremental (90%) and continues until the point of block in the AP (the AP ERP).

• Note: If the AP ERP is longer than the AVN ERP, then pre-excitation disappears (long AH, normal HV and narrow QRS), and conduction continues to decrement through the AVN until the AVN ERP is reached.

• Note: If the AP ERP is shorter than AVN ERP, the AV block occurs when AP ERP is reached. 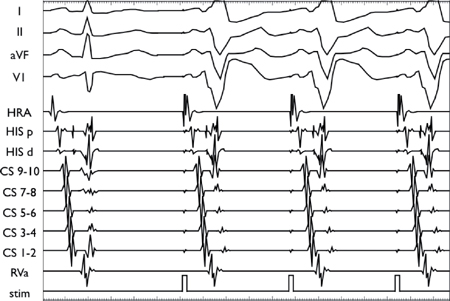 With increased atrial pacing rates, the impulse slows in the AVN (increasing AH interval), allowing increasing degrees of ventricular activation via the AP (HV shortening with manifest pre-excitation). Note the persistence of a short local AV time on the distal CS catheter, which is located near to the AP insertion. 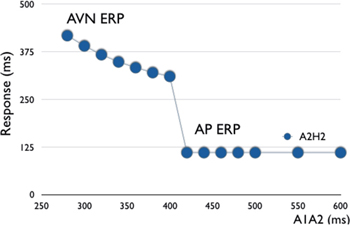 ○Must be present to complete the AVRT circuit

▪ If the pathway only conducts anterograde, the retrograde conduction will be via the AVN.

▪ If the pathway conducts retrograde, then retrograde conduction may be:

• Decremental via the AVN

▪ Generally eccentric with the earliest atrial activation at a site other than the AVN:

▫ Normal atrial activation occurs via the AVN before the impulse is able to conduct via the AP.

▫ Activation should shift from concentric to eccentric with decremental conduction in the AVN, ventricular pacing near the AP insertion site, or through the use of drugs that slow or block AVN conduction (e.g., adenosine, verapamil).

▫ The conduction velocity of the AP is slower than that of the AVN.

▫ The ERP of the AP occurs at a longer CL than the AVN ERP.

○Tachycardia can be induced with atrial or ventricular overdrive pacing or extrastimuli.

• An AP block before an AVN block allows conduction exclusively down the AVN (narrow QRS).

• If conduction is slow enough through the AVN (or with ipsilateral BBB) the AP can recover and conduct retrograde; this results in an “atrial echo” (completed loop).

• If the AVN has recovered, then the echo may conduct anterograde; doing so facilitates the induction and perpetuation of tachycardia. 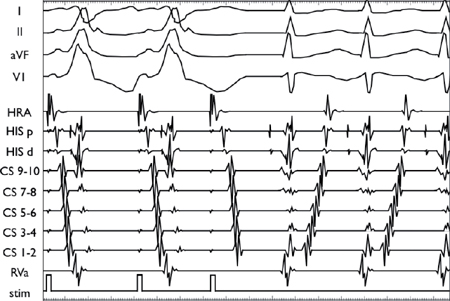 • The same principles apply as above.

• If the AVN has recovered, then it may conduct the impulse anterograde. 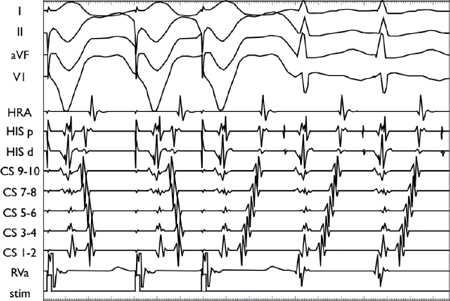 ▪ The same principles apply as above (except reversed).

• If the conduction is slow enough, the AVN can recover and conduct retrograde.

• If the AP has recovered, then the wave of depolarization may conduct anterograde down the AP.

• A retrograde AP block allows conduction exclusively down the AVN.

• If conduction is slow enough, the AP can recover and conduct anterograde.

• If the AVN has recovered, then it may conduct the impulse retrograde to the atria.

▪ The initiation of macroreentry may be more difficult.

▪ Even through there is no manifest pre-excitation, the AP usually has some degree of concealed conduction. (anterograde penetration of an atrial impulse), rendering the AP refractory to retrograde conduction.

▪ To initiate macroreentry, the impulse must occur early enough so that concealed conduction into the bypass tract is blocked.

• It is facilitated by pacing near the bypass tract, which allows more time for the AP to recover.

▪ Obligatory 1:1 relationship (unless nodo-fascicular or nodo-ventricular AP; may have V > A)

▪ Atria and ventricles are activated in series

▪ Concentric or eccentric (see above under retrograde conduction)

▪ Usually has a constant VA interval

▪ CL wobble is usually due to the variation in AVN conduction.

▪ Ipsilateral BBB forces conduction to pass via the contralateral bundle branch and then cross the interventricular septum before returning to the AP. This results in an increase in the TCL and VA time. 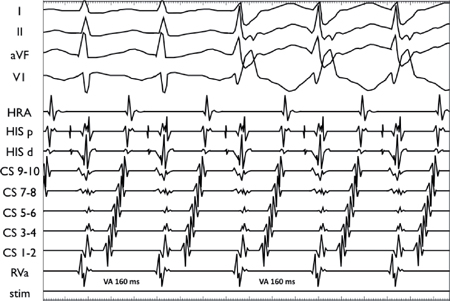 The development of right bundle branch block (RBBB) does not affect the VA timing nor CL, indicating that the right bundle was not part of the circuit. 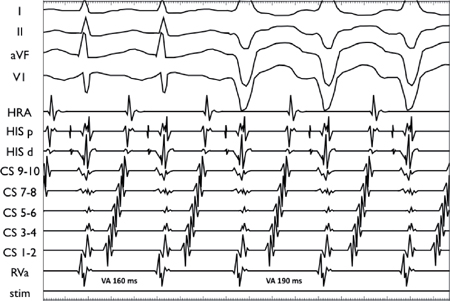 The development of left bundle branch block (LBBB) results in a prolongation of the Tachcyardia CL and VA timing (30 ms) and CL indicating that the left bundle is part of the tachycardia circuit.

▪ Used to differentiate atypical AVNRT from AVRT via a septal AP.

▪ The timing of the atrial activation (A EGM) or TCL after a premature ventricular impulse timed to junctional (His) refractoriness is examined. 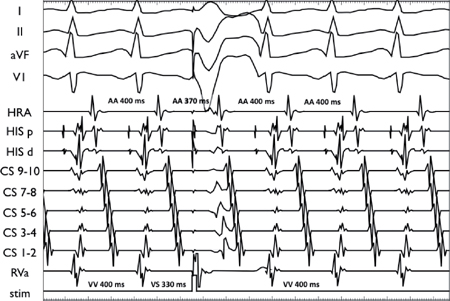 His-synchronous premature ventricular contraction (PVC; delivered 70 ms early) advances the next A and tachycardia cycle by 30 ms (due to decrement in the AP), thus confirming the existence of an AP (but not its involvement in tachycardia). 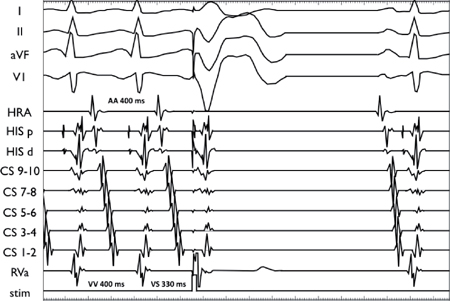 His-synchronous PVC (delivered 70 ms early) terminates the tachycardia without conducting to the atrium. This confirms both the presence of an AP as well as its involvement in the tachycardia (the ventricle is a critical part of the circuit).

▪ VA activation should be similar during pacing and tachycardia.

▪ With termination of pacing:

• A VAV (AHV) response is observed. 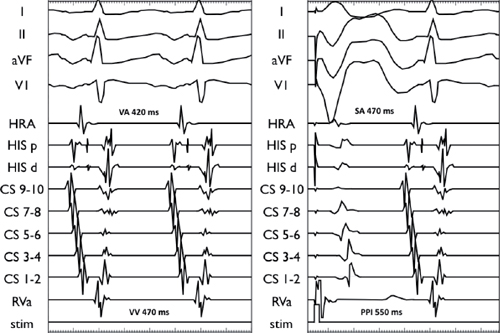 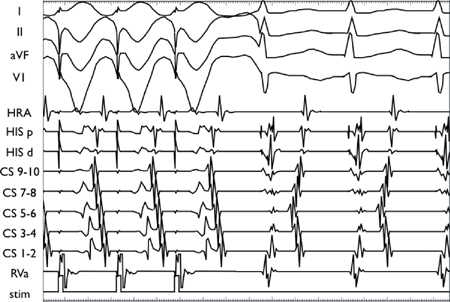 ▪ Used to differentiate AVRT from AT.

▪ With termination of pacing:

• The VA of the first return beat should demonstrate a fixed VA timing (<10 ms of tachycardia VA) in AVNRT and orthodromic AVRT (effectively excludes atrial or junctional tachycardia).

• Post-pacing sequence should be AHA in AVRT.

▪ Entrainment at the RVa and RV base is often used to differentiate AVRT using a paraseptal decremental AP from atypical AVNRT.

▪ Entrainment with and without His capture is often used to differentiate AVRT using a paraseptal decremental AP from atypical AVNRT.