The left atrial appendage (LAA) is a curved, muscular structure connected to the left atrium (LA), located anterior to the left superior pulmonary vein. The majority of the structure extends anterior to the LA and superior to the left ventricle. It usually covers the left main coronary artery or the circumflex coronary artery. Its embryologie origin is derived from the primordial left atrium although its inner surface is derived from the primordial pulmonary vein. In contrast, the developed LA is almost entirely derived from the primordial pulmonary vein.1 Structurally, the LAA differs from the LA considerably. While the entire endocardial surface of the LA is smooth, only the proximal tubular portion of the LAA is smooth.2 Beyond this region, the LAA becomes highly pectinate and varies widely with regard to overall shape, length, and degree of lobulation. At the cellular level, LAA cells appear similar to LA cells but distinct from pulmonary venous cells.3 However, chronic atrial fibrillation (AF) appears to cause smoothing and thickening of the endocardium of the appendage, particularly in the portions overlying the left ventricle.4

The purpose of the LAA is not fully understood. The LAA is more distensible than the LA and possesses both sympathetic and parasympathetic afferent nervous tissue. Amputation of both right and left appendages results in decreases in parasympathetic afferent and sympathetic efferent reflexes.5 Furthermore, the LAA tissue is a major source of atrial natriuretic peptide (ANP) and brain natriuretic peptide (BNP).6 Distension of the LAA induces urine output, sodium excretion, and increased heart rate. This is thought to be mediated in part by release of ANP. During sinus rhythm the LAA accounts for a significant portion of active left ventricular diastolic filling.

The primary morbidity associated with AF is the development of a stroke. During AF, the LAA allows for intracavitary thrombus formation, which can subsequently embolize.7,8 In the 1940s the LAA was thought to be responsible for 50% of strokes associated with AF.9 More recent studies suggest a more prominent role of the LAA in the formation of thrombi; it may be responsible for more than 90% of strokes in nonvalvular AF cases.10–13

For decades, the gold standard for lowering stroke risk in AF patients has been oral anticoagulation (typically with warfarin). While this strategy is effective, it is still poorly tolerated by many patients. Bleeding risks, frequent dose titration and phlebotomy, and drug interactions with other medications and foods have led to the pursuit of alternatives to this treatment strategy.14 In 1948, amputation of the LAA was first proposed as a means of lowering subsequent stroke risk during heart surgery. Over the subsequent 60 years, closure or removal of the LAA has become a focus of therapy for both surgeons and cardiologists alike to prevent embolic stroke in the setting of AF.15–16

LAA removal (obliteration) has been performed as a concomitant procedure to other open chest surgical procedures for 2 decades.17–20 Although this appears effective in eliminating thrombus formation for a dysfunctional LAA, it is technically difficult and not possible in patients whose LAA ostium is broad. Also, fluid retention has been reported in the first few months following this procedure.21 This is believed to be due to the loss of LAA-associated ANP production. Surgical ligation (closure at the base with suture or staples) has become more popular in recent years as it is less anatomically challenging and leaves a functioning organ for ANP release.22,23 Though expedient, the incidence of incomplete closure is high (36-40%).18,22 The risk of subsequent embolism from an incompletely closed LAA is concerning and appears to be higher than in intact LAAs.19

As an alternative to surgical treatment, closure of the LAA using a percutaneous, transseptal device had been performed for the last decade using the PLAATO device (ev3, Inc, Plymouth, MN).24–25 While this device provided a less invasive procedure with a high degree of successful closure, complications, including tamponade and device migration, ultimately led to abandonment of the technology. The WATCHMAN LAA Closure Device (Atritech, Inc, Plymouth, MN) is a self-expanding device roughly the shape of an acorn, which is placed in the LAA in a similar fashion as the PLAATO device. It has shown promising safety and efficacy results in a randomized, controlled trial compared with warfarin therapy for prevention of strokes.26–28 Because this device remains the only percutaneous device still undergoing clinical testing, the remainder of this chapter will focus on it.

The WATCHMAN LAA Closure Device consists of a self-expanding Nitinol metal frame with a porous 160 micron polyester membrane covering the proximal face. The membrane serves to filter blood, thereby preventing LAA thrombus embolization, and promotes endothelial growth over the device. Small barbs are positioned radially around the mid portion of the device to prevent migration following deployment. Prior to release, the device is mounted on a detachable deployment catheter, which is housed in a 12 F delivery catheter. The delivery catheter is required to prevent premature opening of the device. The WATCHMAN LAA Closure Device and delivery catheter are inserted into the heart within a 14 F access sheath. The access sheath is available in 2 shapes, a single and double curve (Figure 13.1). The single-curve access sheath has a single 30° distal bend. The double-curve access sheath has the same primary bend as the single curve but includes a secondary bend out of plane toward the right. The purpose of the secondary bend is to angle more toward the mitral valve and facilitate LAA engagement. The device is manufactured in sizes ranging from 21 mm to 33 mm (3 mm increments) in diameter and in long and short device lengths. Because the shorter device offers more versatility, the longer device type is no longer used. The size measurement represents the width of the device at the widest point (shoulder) upon deployment from the delivery catheter (Figure 13.2). While the device size relates to the uncompressed cross-sectional diameter at the widest point, each of the device sizes fit in a 12 F delivery catheter. The LAA dimensions seen during transesophageal echocardiography (TEE) are used to determine the appropriate device size. 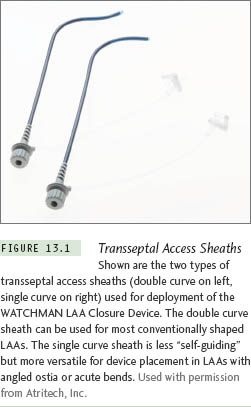