Two-dimensional echocardiography: MS alters the 2D appearance of the valve because it partially fuses the normally independent leaflets; an increase in echo production from the thickened, deformed mitral leaflets; a reduction in mitral orifice area; and creates persistent gradient between the left ventricle (LV) and left atrium (LA). This gradient keeps the stenotic diastolic orifice opened to its maximum and causes the entire valve to dome or bulge into the ventricle throughout diastole. In the parasternal short axis plane, the opening of the valve can be imaged just above the tips of the papillary muscles. From this orientation, its maximum diastolic opening area (Figure 11.2a and Videoclip 11.1a) can be measured by direct planimetry of the 2D image. This method is a reliable means of judging the severity of obstruction [2]. Typically, a valve orifice area of <1 cm2 is considered severe, <1.5 cm2 as moderate, and >1.5 cm2 as mild mitral valve stenosis [3]. 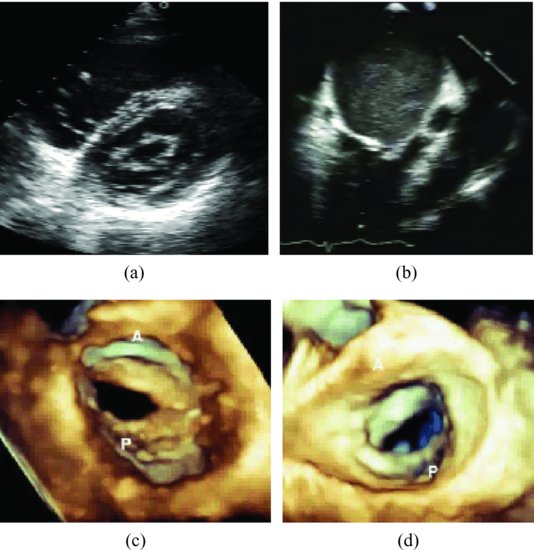 Severe dilated LA with spontaneous echo contrast may be present (Figure 11.2b and Videoclip 11.1b).

Doppler echocardiography provides a constellation of measurements to estimate which the severity of MS. These variables include the gradient across the valve, the inferred area by the pressure half-time, the continuity equation or the proximal flow convergence, and the pulmonary pressure at rest and during exercise from the tricuspid regurgitant jet velocity [5].

In MS, the velocity of mitral inflow increases at rest from a normal value of less than 1 m/sec to greater than 1.5 m/sec. The algorithm to convert Doppler velocity into pressure gradient is the modified Bernoulli equation. Peak gradient, in mmHg = 4 × peak velocity2.